Notes from the Field: The 818 Pinball Wizards Meet-up in North Hollywood - Atlas Obscura
Want to see fewer ads? Become a Member.
In This Story
Place

This incredible collection of vintage pinball machines can be played at 25 cents a pop.
Place 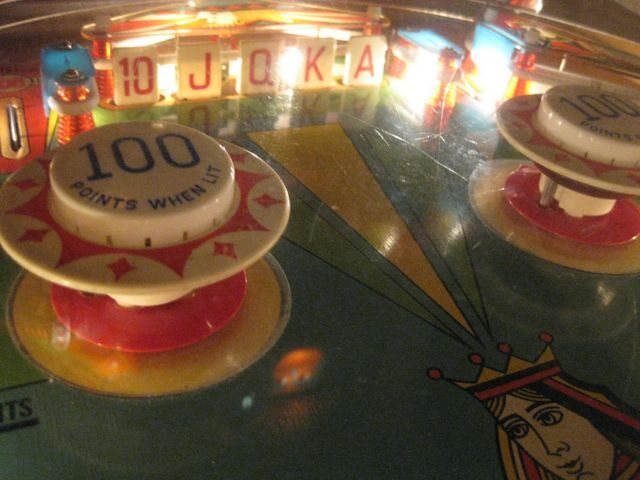 Drop A Card pinball was released by Gottlieb in November, 1971

Last month I stumbled upon a pinball enthusiast with a contagious passion for the game, and a jaw-dropping game collection in his private home. Dan Cerny’s home collection was the meeting place for the 818 Pinball Wizards group. Soon after being welcomed into the unassuming North Hollywood house, it sunk in that the pinball tournament a friend had invited us to was not some free-for-all at an arcade or pizza joint. The awkward feeling that we had crashed someone’s private party started to sink in, but it was too late – we had brought beer, we had paid our $5 buy-in, we were playing some pinball.

We didn’t ask many questions when invited to this mysterious pinball tournament. My husband is quite the pinball wizard, and I was easily coaxed with the promise of beer. I had no intention of playing, as I happen to be perfectly awful at every game in existence, but I figured I would get knocked out immediately, and could then relax and take some photos while enjoying a frosty beverage.

When we arrived and discovered it was clearly being held at someone’s home, I got nervous. Just how did my friend know this guy again? “Oh, I don’t. I just found out about it online, on meetup.com.”

The house wasn’t palatial, and I wondered, just how many pinball machines could one fit in a home? Enough for a tournament? I tried to remain positive, and hoped I’d mentioned to someone where we were going, just in case this “tournament” was in the basement. As the door opened up into a room lined wall-to-wall with blinking, pinging, buzzing machines, I realized that whether we were crashing, or stepping into a trap, I really wanted to go in there. (By the way, the answer to “how many” is 17. There were 17 machines in there.)

We were welcomed, given name tags, and told to make ourselves comfortable while others arrived. I located our perfectly nice host, Dan Cerny, and asked if I could poke around and take some photos, which he enthusiastically allowed. While the bedroom was understandably off-limits, every other room in the house was filled with the neon lights, dinosaur roars, siren sounds, and frantic bells of a pinball paradise. 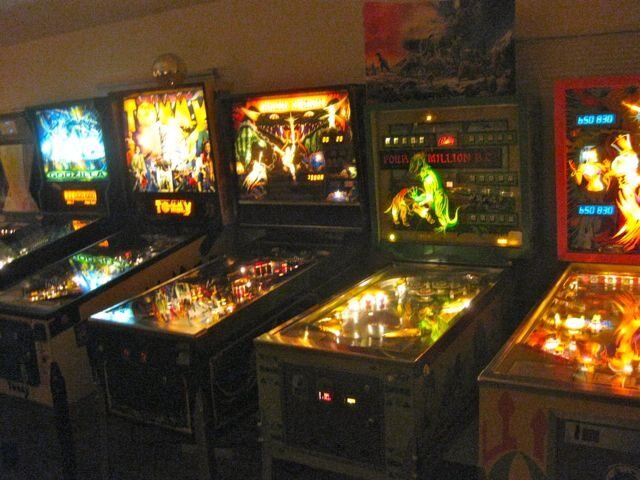 A fraction of our host’s private collection, which you see upon entering.

Once everyone had arrived, Dan called us into the main room. When he announced that we would be choosing a name out of a hat for a partner, I panicked. Anyone stuck with me would be doomed, and these people looked like they took pinball very seriously. I tried to beg out, but Dan wasn’t having it. Somehow I felt relief when it was his name that I picked – he had a house full of pinball machines, he got to play any time he wanted to, so if I bumped us out in the first round, it would feel like less of a disappointment as opposed to someone who had traveled to attend.. 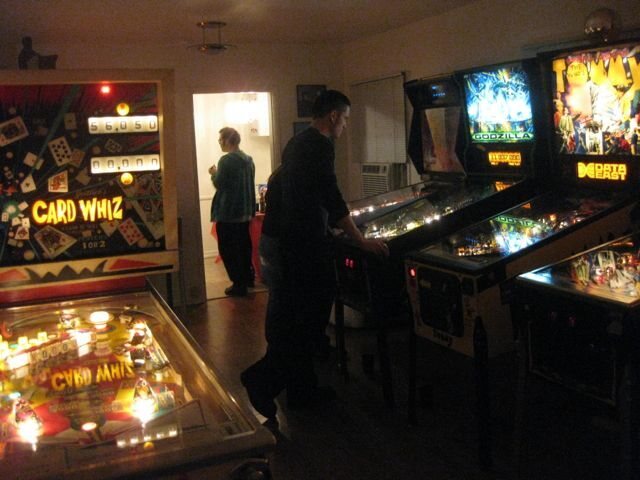 Shiloe Swisher takes on Godzilla before the tournament begins.

As he explained the game, I realized that he had crafted the rules to allow for beginners and experts to co-exist on an even playing field. He talked about his philosophy on pinball and the meet-ups as we played, taking time to pat my shoulder and give encouragement when I managed to do something right, and telling me I was doing fine even when I blew it. A feeling of acceptance and comfort eventually took hold. I was able to relax about my pathetic skill level, and actually started feeling like a contender.

The tournament game he had designed was easy, fun, and fair. It used game cards with a tic-tac-toe format, where in each square there was a mini-game. The mini-games were all different, some of them involved skill, some were pure luck, and others were just silly. (For instance, each partner controls the flipper on one side of the game.) If you challenged and won, you got an X. If you challenged and lost, the opposing team got to give you an O. Whichever team had the most winning game cards after two hours won the tournament. I found out later that this simple to play, but complicated to plan, game was only for this particular meet-up. Dan creates an entirely different game from scratch each month, and has never presented the same game twice. 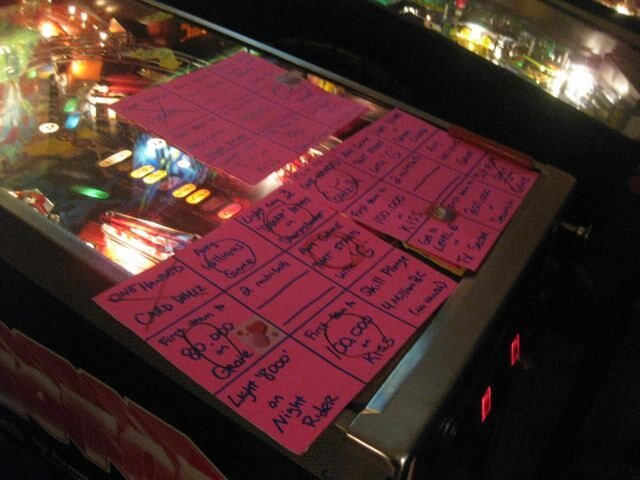 There were three rooms in the house containing machines – the front room was long with hardwood floors, with machines from different eras lining every available space. The other two rooms were much smaller, but held as many machines as could be squeezed in and still allow movement. Dan told me about his collection, as well as a little about the history of the game, and gave me some pointers. 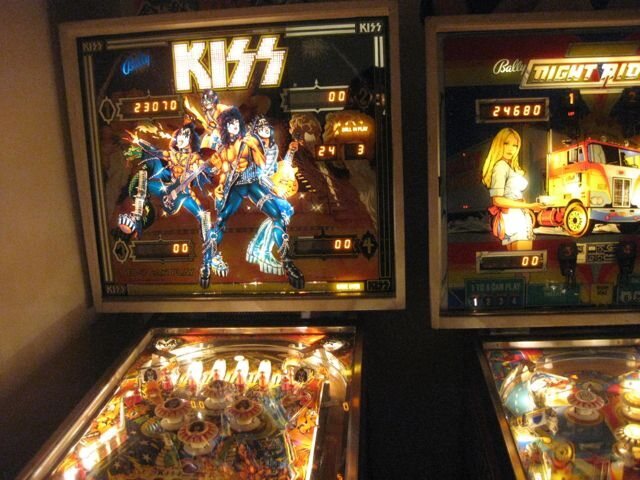 The KISS game was a favorite, for obvious reasons.

After questioning him about each and every one it was hard to pick my own favorite, but if I had to, the KISS machine would probably win out above the rest. There’s just something about Gene Simmons challenging you from every surface to really get the blood pumping. It may have been my imagination, but that particular machine seemed to entice the most intense levels of competitive behavior, even in this friendly, welcoming group. Or maybe I liked Seawitch better. Or Four Million BC. It’s hard to say. (See below for details on all of these.) 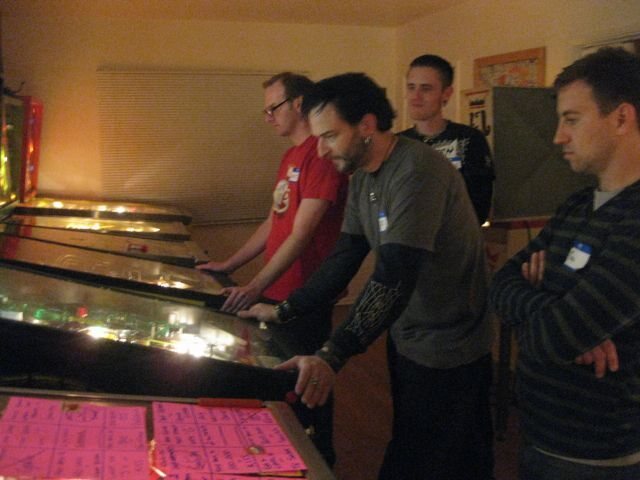 The competition gets serious, with brows knit in concentration.

The tournament eventually ended, and the pot was delivered to the victors. Dan and I didn’t win, but we didn’t do too bad, either. After the game, I asked Dan more about why he invited total strangers over to his home, and put so much time and effort into creating tournaments. I had noticed that he hadn’t kept any of the buy-in money for himself to cover hosting or costs – the entire amount became prize money.

He said perhaps the most wonderful thing I’d heard in a long time in the jaded, hungry land of Los Angeles. He said he just really loved pinball, and wanted other people to love it too. He constantly invited people to come and play any time they wanted, but people tended to think he wasn’t serious, so he started the meet-ups to encourage people to come and enjoy the games, because that’s what they’re there for. It was the best possible reason I could think of.

The 818 Pinball Wizards hold meet ups everywhere from Dan’s living room to the Pinball Hall of Fame in Las Vegas. While many collectors of these classic games tend to hoard them for themselves, refusing to allow novice players to come anywhere near their machines, Dan shares his love of the game and his impressive collection with anyone willing to learn. Below are just a few games from Dan’s collection: 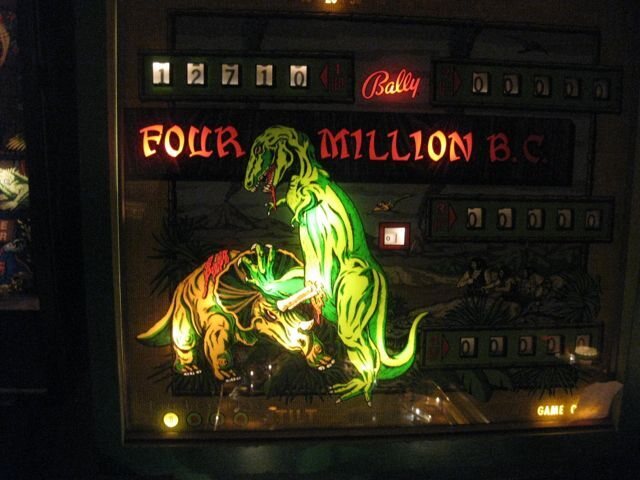 Four Million BC was released by Bally (1971)

Dan says: “Four Million BC was released by Bally in 1971, and pinball lovers agree it was way ahead of its time. It has a lot of forward-thinking features that would become popular much later (kickback, two and three multi-ball, skill shot, etc.). It also features very unusual zipper flippers — flippers that, when activated, literally zip together so the ball cannot drain down the middle.

It was designed by Ted Zale, who was Bally’s main design man through the 1960s. (He invented the zipper flipper in 1966.) The art is by Dick White, who also did art on Bally’s popular game Nip It, famous for being the pinball machine at Arnold’s on Happy Days (even though, technically, the game came out 20 years after the time period of the show).” 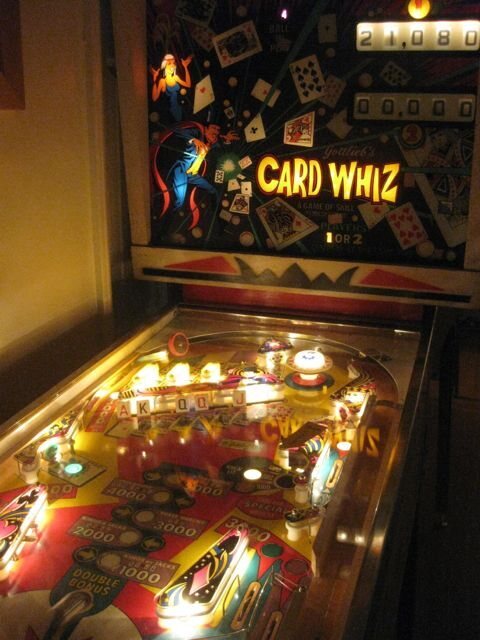 Dan says: “Card Whiz was released by Gottlieb in 1976, by my personal favorite art/design team of Gordon Morison and Ed Krynski. They were the go-to guys for pretty much all of the 1970s games at Gottlieb (aka when Gottlieb absolutely dominated the industry). This is the two-player version. They also released a four-player version of the same game called Royal Flush in April of 1976.

Out of his millions of designs, Card Whiz/Royal Flush was Krynski’s personal favorite due to the unusual slanted drop target bank. Less than two years later, Gottlieb would start producing solid state machines and by 1979, no more electromechanical pinball. They dug up this design again for a third solid state version called Royal Flush Deluxe from 1983.” 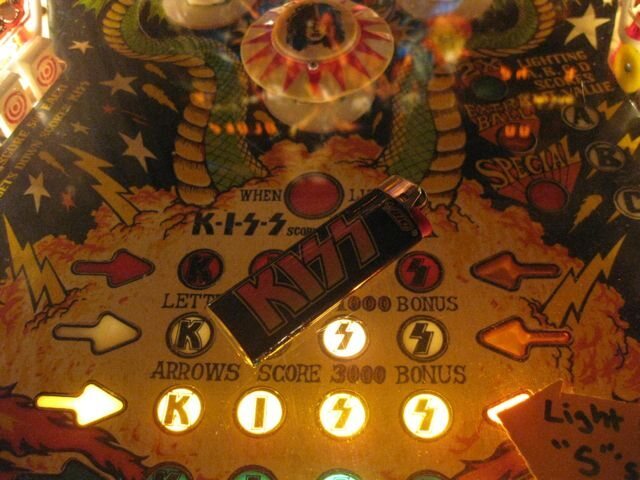 Dan says: “Everybody knows the KISS pinball machine; it’s a classic. The art by Kevin O’Conner (still producing pinball art, currently for Stern) is very iconic. Released by Bally in June of 1979 at the peak of pinball, it became (and still is) one of the top 10 best selling machines of all time (17,000 units produced!). Thanks to the Kiss Army, it’s still a very popular game to collect as well.

It was designed by Jim Patla, who was coming hot off his design of another iconic and even bigger hit game, Playboy. (18,250 units by comparison.) My game, I’m proud to say, is Home Use Only, meaning it was never in an arcade or on location. It was bought brand new by a family in 1979, and then passed down to a relative and then bought by me. I’m only the machine’s third owner.” 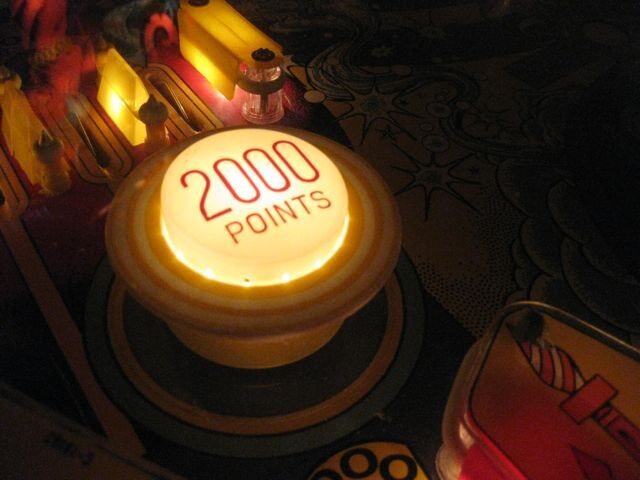 Dan Cerny attends pinball events all over the country, and hosts other pinball get togethers in places other than his living room. For information on how to join in on the fun, visit the 818 Pinball Wizards Meet Up page.

Join us in San Francisco for the Obscura Society Salon Series

5:40
Want to see fewer ads? Become a Member.
From Around the Web
THE GASTRO OBSCURA BOOK
Taste the World!
An eye-opening journey through the history, culture, and places of the culinary world. Order Now