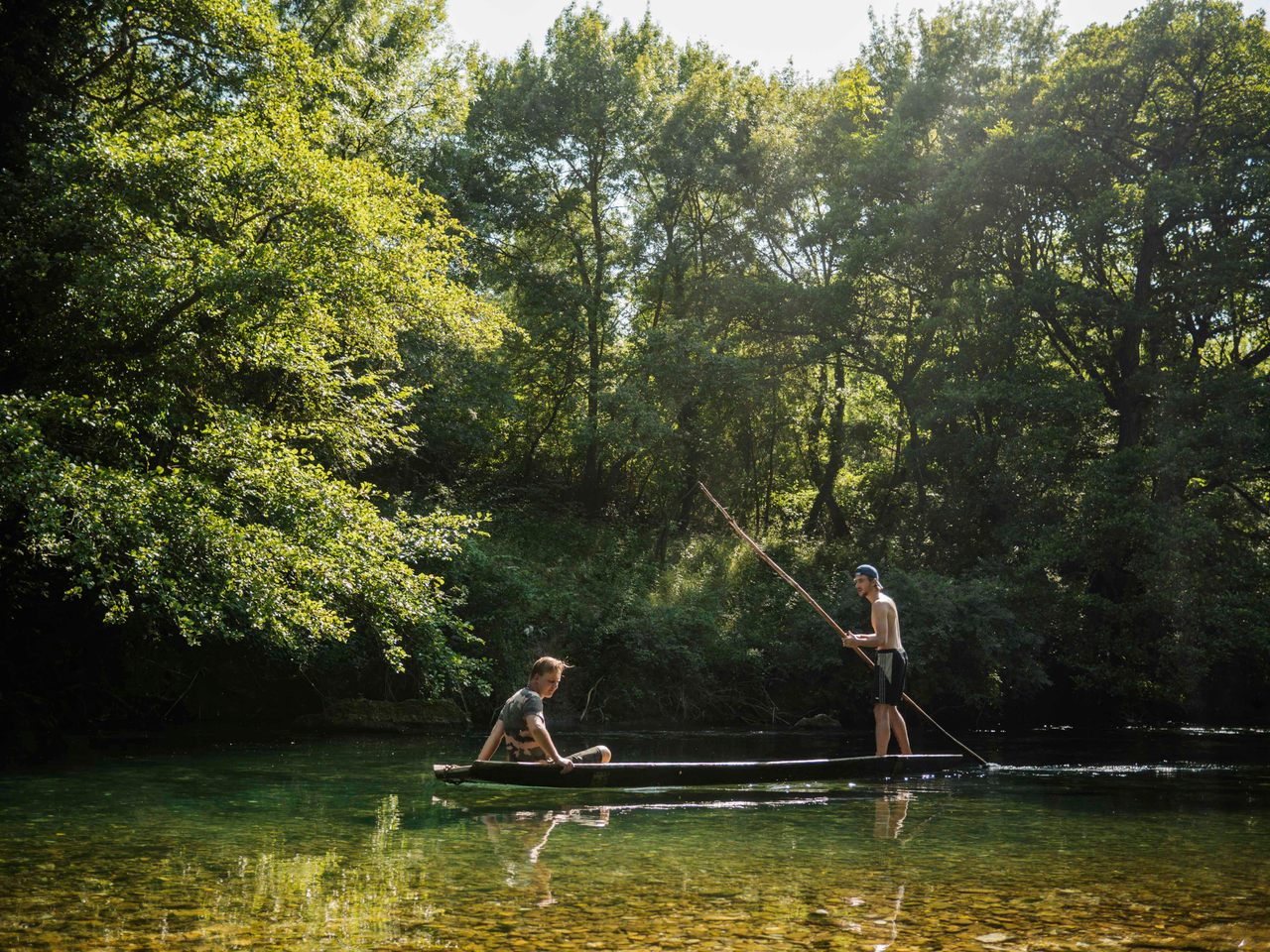 Taking a négo chin out on the cold, shallow waters of the Sorgues River offers respite from the Provençal summer's heat—nearly forgotten, the traditional wooden boats are enjoying a revival. Quentin Boehm
In This Story
Destination Guide

In a workshop hazy with sawdust, just a few steps away from the main canals of an idyllic Provençal village, Alain Pretôt crafts a small, wooden boat. It’s one of two or three he’ll make this year, in a style unique to the Sorgues River. The workshop, decorated with posters of Georges Brassens, The Rolling Stones, and AC/DC, is narrow. There’s just enough space to circle the long table where the boat’s skeleton takes shape. This is a place of labor, but not obligation: The pleasure of crafting in this workshop springs from the love of a river.

“This boat is our own method of freedom on the river. It’s a direct link to the past. It reminds us of our heritage and allows us access to nature in a respectful way,” says Pretôt.

In the late 1970s in the south of France, Pretôt dreamed of gliding over the blue waters of the Sorgues on a traditional lightweight wooden fishing boat called a négo chin—Provençal for “drown the dog,” a reference to its inherently unstable low and flat-bottomed shape. Alas, the boat was a rarity at the time, and there was no one to build one for him. So began his quest to learn and revive the forgotten craft. Now, 45 years later, Pretôt has built more than 100 of the boats, and played a significant role in reviving the fishing culture that founded the village of L’Isle-sur-la-Sorgue.

“The first settlers of L’Isle-sur-la-Sorgue were fishermen, before the Gallo-Roman period. The embankments were shallow and wild,” said the late Sauveur Romano—the village’s amateur historian—in a 2020 interview. “They needed boats they could easily manage in the tributaries, that don’t cast a shadow which scares the fish, and that could be maneuvered alone,” said Romano. “These boats were tools for work, adapted to the natural conditions.”

There is no other boat quite like the négo chin because there are few rivers like the Sorgues. Less than an hour east from Avignon, the spring-fed Sorgues is the only outflow of a massive underground basin, and water filters through miles of rock before surfacing. As a result, the river’s temperature hovers around 53-55 degrees Fahrenheit year-round. The river and its narrow feeder streams are surrounded by marshes, which humans have partially rerouted, drained, and cleared over the centuries.

According to Romano, historical records first mention the village’s fishing guild, Confrérie di Pescaïre Lilen, in 1593. More than a professional association, the guild offered local fishermen a variety of assistance, not unlike modern social security or worker’s compensation programs. The fishermen of the Confrérie used négo chins and special fishing techniques, such as l’araignée, the spider (a fisherman places a 40-foot net on the riverbed overnight and collects his catch in the morning) and the l’épervier, the sparrowhawk (the fisherman throws a round net lined with weights in a circular motion, trapping the fish as he pulls it in and the opening closes).

Over time, industries such as papermaking, dyeing, and silk-spinning began utilizing the force of the Sorgue. These activities, as well as villages growing along its banks, increased river pollution and, Romano said, reduced the fish and crustacean populations. The economic value of fishing diminished and membership in the guild waned. By 1870, the Confrerie had disappeared.

“A few old-timers had the boat I was looking for, but not many in good condition,” says Pretôt. In 1976, after digging through archives and scouring the cabanons, small riverbank fishing cabins, for models, Pretôt and his father managed to recreate the ancient fishing boat, using European spruce wood. Following tradition, they let it season in the water to become watertight (today Pretôt uses a thin layer of modern sealant to speed up the process). Once launched, Pretôt had large swaths of the river to himself, gliding along, propelled by a long vertical oar similar to those used by gondoliers.

Around the same time, interest was growing in the fishing culture that had founded L’Isle-sur-la-Sorgue. Jean-Louis Borel, a local fisherman and river enthusiast, led the movement to bring back the Confrérie di Pescaïre Lilen and revive some of the river’s lost traditions.

“Fishing with a net on the river, like our ancestors did, was illegal in the late ’70s. It still is, by the way,” says Borel. A man on a mission, he sought out someone to teach him how the nets were made and how to throw them.

“The people fishing with nets who I learned from were essentially poachers attached to their tradition,” Borel says. But their knowledge was crucial to rebuilding the Confrérie. And in 1977, the reborn guild put on the first festival of Peche d’antan, loosely translated as “fishing of bygone days,” in the center of the village. The festival’s size and popularity has grown each year. The event begins with a parade of négo chins, many of them built by Pretôt. Traditional fishing technique demonstrations follow. It’s the only time of year that net-fishing is allowed on the Sorgues, and even then the fish are thrown back into the water. Outside of the festival, fishing with nets incurs a fat fine.

Other, less-traditional festival activities include négo chin races up and down the canals: When they pass underneath low footbridges in the village, boat navigators flatten themselves to the decks, hoping not to take a tumble into the chilly river.

Borel sees a healthier river today than during his youth, despite development and increased tourism. “Today, we have a river that compares with some of the most pristine and sought-after rivers in Canada when it comes to trout fishing,” he says.

“When you go out on the Sorgues, to fish, to swim, or just to sit, the river has a way of harnessing your attention, so you think of nothing else. The Sorgues has its own universe,” says the current Confrérie president, François Arnaud.

As for Pretôt, who led the négo chin’s revival, he knows that he won’t be building these boats forever. Happily, the craft has been picked up by another so-called “water-carpenter” in the village.

Each spring, more than one million alewives navigate to the fresh water of Damariscotta Lake—with a little help
boats

Jill and Jim Koch have been delivering mail by boat to Hells Canyon for decades, following a century-old route.
sports

Tarpon, a powerful game fish, helped make the state a tourism hub more than a century ago.
List