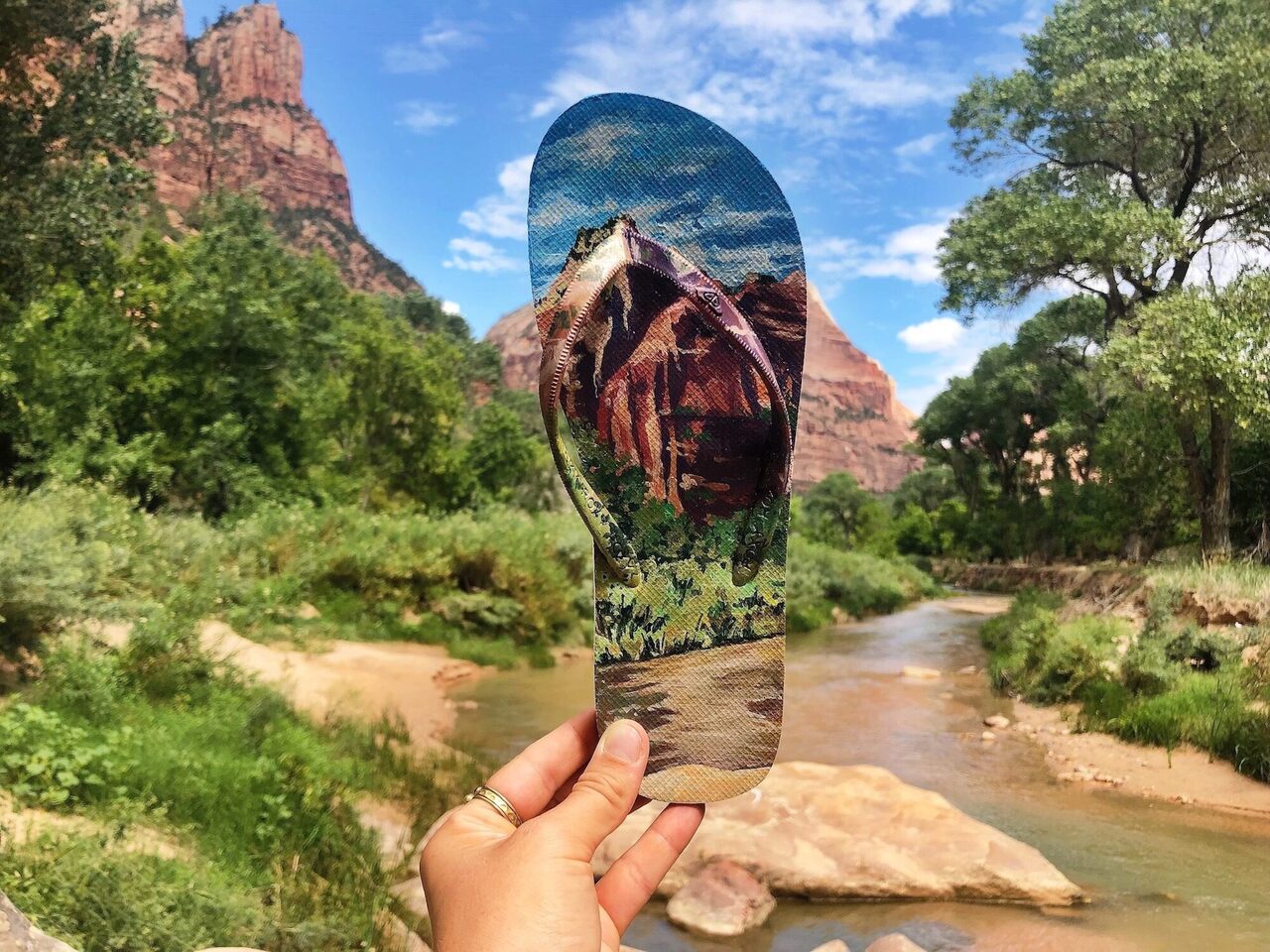 In 2018, Reading found this flip flop (and painted it en plein air) on the banks of the Virgin River in Zion National Park, Utah, which sits on Southern Paiute and Pueblos land. Courtesy Mariah Reading

Mariah Reading uses unique canvases for her paintings. When the nomadic park ranger and frequent artist-in-residence finds lost objects and trash while adventuring in state and national parks across America, she paints the surrounding landscape on the item, highlighting waste and showcasing the beauty of the protected areas. She has captured the morning light flooding through the gaps between redwood trees at Big Sur on a lost Croc, mimicked the steep cliffs of Channel Islands National Park on a flipper, and—on a forgotten helmet—depicted riotously colorful fall leaves wreathing the banks of a placid lake in Acadia National Park.

When she’s done painting, she photographs her art in front of the landscape that inspired it. Often, it’s hard to tell where reality ends and the painting begins.

Reading’s series is a project several years in the making. While she was studying visual arts at Bowdoin College, she took a mold-making class that required students to cook up large vats of concrete and rubber to create molds. The installations they’d in term craft, ended up generating vast amounts of waste: Each brush that touched the rubber needed to be tossed, as the material couldn’t be washed down the drain.

“I was very confronted by all this waste in the arts, and decided I couldn’t continue this practice if the materials I was using to create landscapes were going into landfills,” Reading says. She decided to accumulate all her old, crusty paint tubes, brushes, and things that would normally get thrown out and cobbled them together to form a canvas for her landscape paintings. That ethos of turning discarded items into works of art has since served as the basis for many of her projects. As time went on, her work shifted from combining multiple discarded objects into a canvas to focusing on painting a single item. In her most recent show, Worn Landscapes, Reading’s canvases were jeans, hats, a snorkel mask, and more—all objects she found scattered along trails and beaches. The goal is to show how we as humans wear these wild lands down (pun intended).

Currently, the artist is working from Mount Desert Island, home to Maine’s Acadia National Park, where she served as an outdoor educator last summer. She’ll continue this project throughout 2021, first from the boundary waters of northern Minnesota and then at two residencies—one in Guadalupe Mountains National Park in Texas and one at the Sitka Center for Art and Ecology in Oregon.

Atlas Obscura talked to Reading about pajama pants, time spent in nature, and the importance of recognizing your mark on the world.

Some of the items you’ve painted on are pretty surprising, including a smoke detector and keyboard. Did you find all of those in nature?

Those two specifically were both done in Denali National Park [in Alaska], where I had a residency in 2018. Denali is part of the Zero Landfill Initiative [an effort to cut down landfill-bound waste in Denali, Grand Teton, and Yosemite National Parks] and before I went out to my cabin in the backcountry, I met up with the NPS waste management and recycling staff and rummaged through their trash. So those I didn’t find in nature, but they were trash from the park.

Other than that, yes, the whole idea is finding objects in these specific parks or landscapes. I’ve also been transitioning towards using my own trash, too, because I don’t want my art to be pointing fingers at anyone. I want to acknowledge my own footprint in these landscapes, as well. I want to acknowledge that I’m a consumer and I also have a lot of growth towards becoming a zero-waste person.

This summer, while hiking on Pemetic Mountain Northwest Trail in Acadia National Park, there were these flannel heart pajama pants just resting on a tree. And it just leads to a lot of questions like, “Who isn’t wearing pants?” and “Where did they go?” It’s fun to develop stories around an item and how it got there.

The backcountry of Denali was most definitely the cleanest place that I have been. It’s most likely a combination of it being a remote 6 million-acre park with limited visitation and it being a part of the Zero Landfill Initiative. In any park, coastlines are usually the most littered [spots]. I am amazed by how beautiful the interior of parks can be and how inescapable marine debris washing up on shore seems to be. Those coastal parks see a lot of Styrofoam foam buoys, ropes, and plastics. Elsewhere, the most frequent trash is probably water bottles or beer cans. However, recently there has also been a lot of gloves and masks.

Do you have a favorite piece?

Yeah—the first piece I did that was a single object, not a bunch of [objects] stuck together. I was working at Guadalupe Mountains National Park and along its edge there was a major highway. I would walk along it and find a lot of car parts, just a lot of scrap things that fall off as the cars are whizzing past. I found half of a hubcap, and I took a closer look at it and realized it had cracked perfectly to form the silhouette of the mountain range I was standing in front of. I had a vision that I would just paint the land onto it and use the shape of the object to inform the piece. That’s when I started getting more into photography, too. Then my finished work shifted to not just being the painting, but also the painting photographed in the land where it was found.

What have you learned from other people’s trash?

I think it’s been a lot of self-reflection, like finding a water bottle and thinking about the number of times I forgot my reusable water bottle and had to purchase a plastic one at the store. It has really helped me build more sustainable habits. That’s the point of my art: picking up an object and seeing myself in it. It’s helped me be hyper aware of my own footprint and how I can reduce my own impact.

What message do you hope people take away from your work?

The beauty of these places is deteriorating as visitation increases and waste management flails. I also hope people can see the accessibility of this medium. I’ve worked as a teacher in the past and tried to encourage people who are interested in art that there are ways to make it without having to purchase expensive canvases. You can literally make art out of your trash. You can use the pizza box from last night as a canvas or find another way to creatively repurpose things around your home. Art is an innate way that we can use to express ourselves and I hope this sparks some inspiration in viewers—that they see the world in a different and more beautiful way.

Bottles, cans, and more can reveal a long history of industry, recreation, and shenanigans.
art

Step Inside a Sculpture Garden Made Entirely Out of Trash

More than a year into the pandemic, scientists are seeing the impact of disposable gloves and masks on ecosystems.
Video