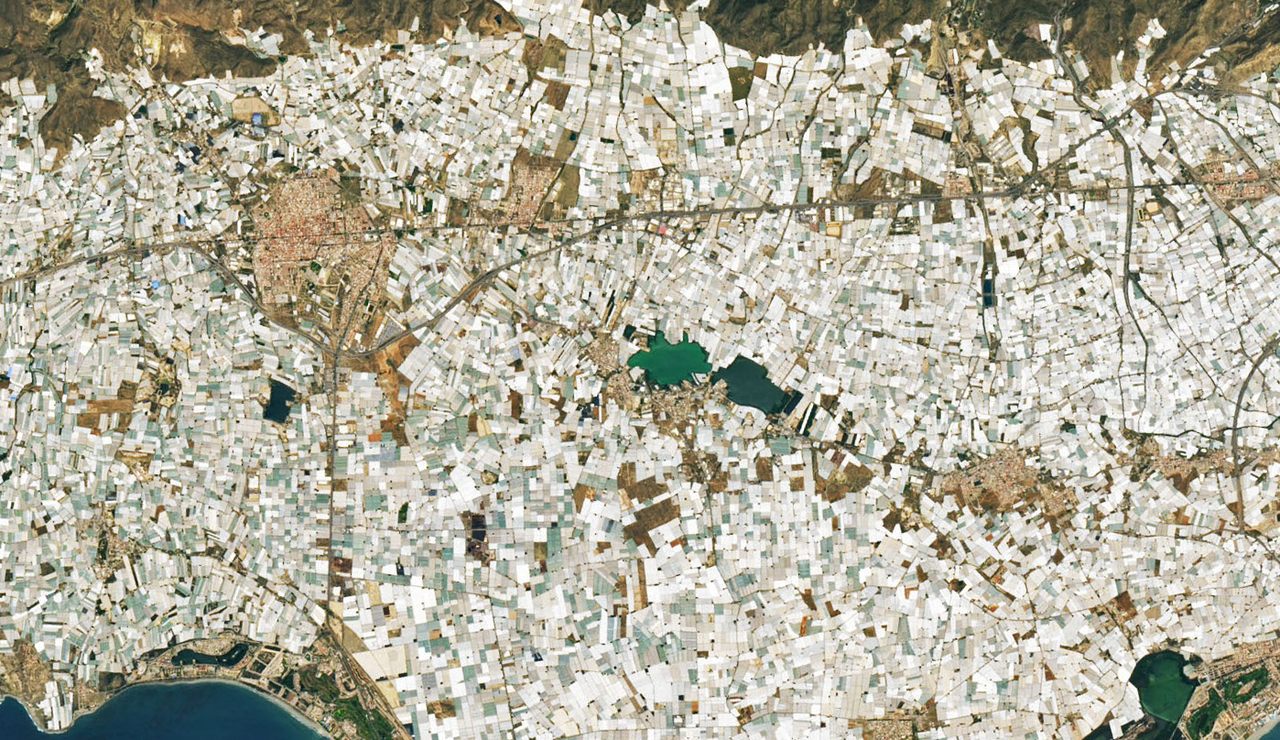 The man in the hoodie slips out from his hiding spot near the crime scene and makes a run for it. But brooding Detective Héctor Tarancón spots him. Whipping off his sunglasses to tell us that he means business, the supercop of few words and many pensive expressions takes off in pursuit. The two men race down narrow dirt streets lined with low, identical structures, one after another after another.

The suspect smashes through one of the walls—not that impressive, actually, since it’s just a thin sheet of plastic—and disappears before Tarancón turns the corner behind him. He has vanished. Thwarted for now, the detective slips his shades back on as the camera pulls back, revealing that he is surrounded by an expanse of white greenhouses. They gleam under the strong sun in a cloudless Mediterranean sky, and stretch all the way to red-brown mountains on the horizon.

The setting for the Spanish crime melodrama Mar de Plástico (Sea of Plastic) may look computer-generated, but the location is real. The series was filmed in southeastern Spain’s Almería province, which has been transformed over the last half-century from sparsely populated, semi-arid scrubland into a bustling agricultural powerhouse. The key to Almería’s fruit and veg boom has been cloudless skies, accessible groundwater, and plastic. Lots and lots of plastic.

Plastic greenhouses take up nearly 100,000 acres along the coast and creep up into the foothills of the Sierra Nevada. Despite the region’s miniscule precipitation—less than nine inches of rain fall there annually, and virtually none of it from May to September—drip irrigation drawing from local aquifers allows farmers to grow more than three million tons of tomatoes, berries, and other crops annually.

According to a paper published in 2019 in the International Journal of Environmental Research and Public Health, while most of the greenhouse farms are small, family-owned operations, they employ about 100,000 foreign laborers. More than 110 nationalities, primarily from Africa and Eastern Europe, work in the greenhouses or adjacent industries, such as packing and transportation. Despite the economic boost the sea of plastic has given the province, multiple media reports have documented poor working and housing conditions for many of the foreign workers, leading to charges of exploitation.

The explosion in the number of greenhouses, and the massive influx of people who grow and process the crops they produce, has also been hard on local nature. Numerous environmental groups have raised concerns about overuse of groundwater resources—once depleted, aquifers may take centuries to recover. The region is also considered a biodiversity hotspot, but many of its native plants, which evolved to occupy a narrow ecological niche, are particularly susceptible to changes in their environment, including habitat degradation. Of the two dozen or so native plants exclusive to Almería, six are critically endangered, including the trailing, yellow-flowered Gadoria falukei, discovered only in 2017.

Surprisingly, the greenhouses may provide a subtle assist in regulating the region’s climate. A handful of papers published by scientists at the University of Almería have suggested that all that bright white plastic may be reflecting sunlight back into space and effectively cooling the province. A 2008 paper in the Journal of Geophysical Research, for example, found that while overall temperatures have risen in this region of Spain, Almería has experienced a drop in temperature of about half a degree Fahrenheit. Limited subsequent research has been less conclusive about the reason for this dip, however.

While the impact of the greenhouses on the local environment and climate remains uncertain, there are signs that change is again coming to the region. Growing international concerns about global “plasticulture,” such as a 2021 United Nations report that highlighted its negative long-term impact on the environment and public health, are creating pressure for more sustainable methods of agriculture. For now, however, the sea of plastic remains as it has been for decades: a dazzling white patchwork visible from space, and a maze on the ground through which TV cops give chase.

This Abandoned Spanish Resort Is Still a Popular Vacation Destination

The Alaska delta, one of the world's largest, is a ‘mosaic’ environment best visualized with a psychedelic palette.
islands

Environmentalists see small reforestation pilot sites around the capital of Amman as a first step to a greener future.
Video • PinDrop

6:55
Want to see fewer ads? Become a Member.
From Around the Web
Atlas Obscura Trips
The Kingdoms of Andalusia: Secret Gardens and Haunted Palaces
View This Trip
Thanks for sharing!