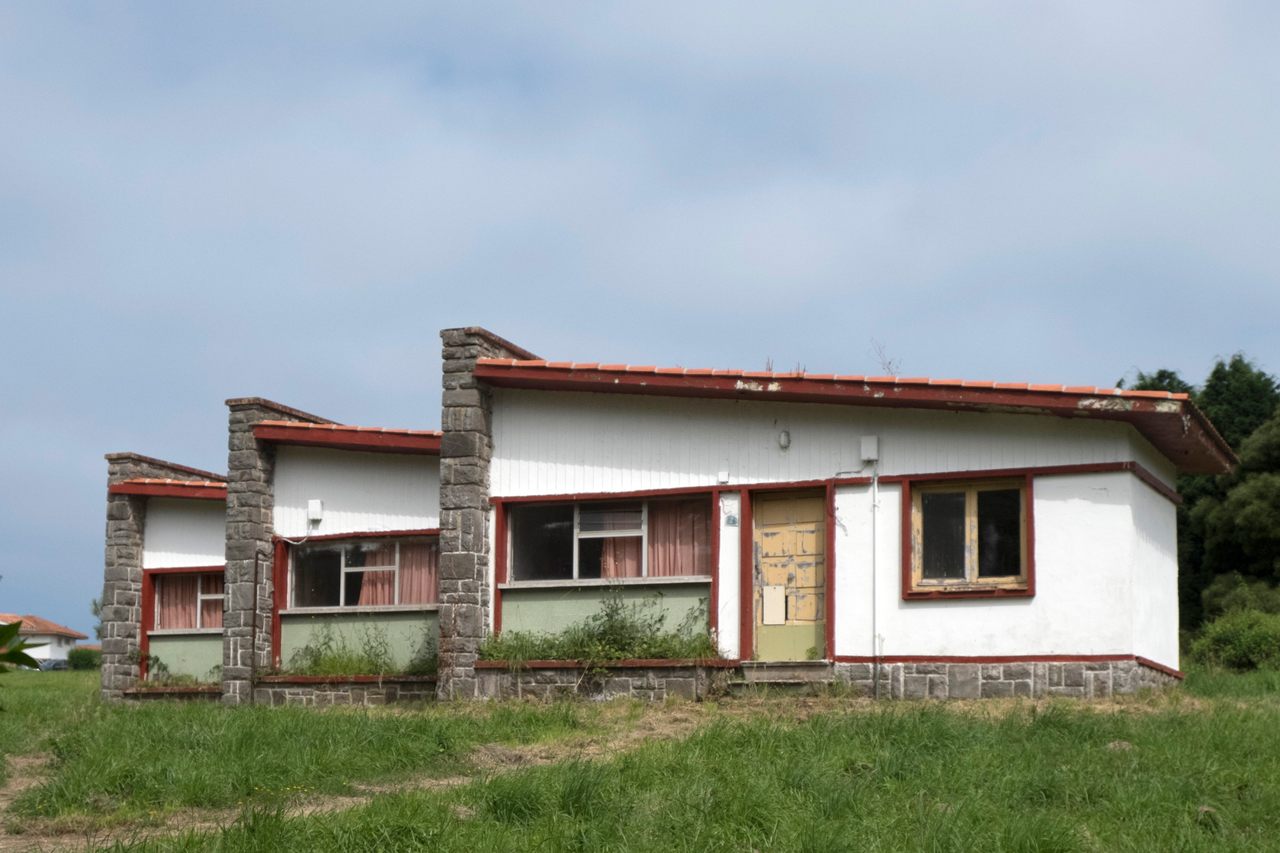 The mid-century architecture of Perlora Ciudad de Vacaciones is unusual in Northern Spain. “It really is a treasure,” says architect Adrián Cachán Vallina. Alvaro Fuente/NurPhoto via Getty Images
In This Story
Place

The closed and crumbling Francoist luxury resort for workers is still full of life—for now.

About 150 peculiar mid-century buildings stand in various states of disrepair on the stunning Asturian coast in Northern Spain. The structures are contained in a fenceless 50-acre area that opens to three beaches separated by jagged green cliffs. It’s what remains of Perlora Ciudad de Vacaciones (translation: Vacation City), a holiday resort built by the Francoist regime so workers around Spain could enjoy subsidized holidays by the sea.

The complex officially closed in 2005, just over five decades after it was inaugurated by Spain’s fascist dictatorship. Since then, several buildings have collapsed or been torn down. The botanical gardens have given way to thorns. But when the sun shines and the summer sets in, this surreal ghost town bursts with life.

A few families are so entranced with the place that they have colonized the exteriors of specific villas. They continue returning to the tiny homes where they once summered, sheltering from sun or rain below slanted overhangs. One couple has even planted a garden.

“It’s like people praying at a cathedral in ruins,” says Adrián Cachán Vallina, an architect who spent his childhood summers at the resort. As an adult, he measured every building one by one so he could craft his vision for how the vacation city could be revitalized.

Less than a 30-minute drive from Asturias’ three largest cities, the decaying retreat also fills up with less dedicated visitors—beachgoers; those who use the space for barbecues, birthday parties, and baptisms; and groups of young people meeting up for drinks. Its soccer fields and tennis courts remain in use, although the playground is full of stinging nettles.

Others, like Merche García Junquera, a resident of the connecting town of Perlora, from which the vacation city took its name, stroll through the ramshackle resort. “Every day, my body brings me here. But knowing how beautiful everything once was… seeing it now just kills me. The only thing that isn’t spectacular about it is the state it’s in,” she says.

García Junquera, a retired teacher and current president of the Perlora neighborhood association, says she roams the grounds taking pictures of garbage, “alternative bathrooms,” and decay, attaching them to the complaints she regularly emails to the regional government, which owns the complex.

“What do I want? First, I want it clean. Then, to see it reactivated. The government has drawers full of projects and ideas,” says García Junquera. “It doesn’t make sense to let such a marvelous place fall into ruin.”

García Junquera, who got married in the vacation city’s brutalist church, has formally submitted a project to restore the vacation complex, as have many others. Her project includes a spa, swimming pool, and renovated buildings to bring back tourists, but she said doesn’t really care what becomes of the space as long as it’s conserved and reopened.

Almost everyone who goes to the vacation city has an idea for what it could become—a space for construction, art and architecture workshops, a museum, holiday rentals, a convention center, student residence, or senior center. There’s an online petition urging the government to save it from oblivion. Private bids to turn it into a glamping resort or hotel have also been publicly considered. But every proposal has stalled or fallen through.

Although reviving the vacation city would be expensive and the law stipulates that it must remain accessible to the public, the prevailing theory as to why the left-wing regional government is allowing it to crumble has to do with its Francoist roots.

Perlora Ciudad de Vacaciones was a project of the Spanish Syndical Organization—the sole legal trade union under the Francoist dictatorship, which encompassed all companies and workers. For fascists, class struggle was believed to be the source of all conflict. That’s part of why the union, controlled by the regime, tried to placate workers with initiatives like vacation cities, explains the historian Carmen Belén Tuñón Vega, who is writing her doctoral thesis on Francoist vacation cities at the University of Oviedo.

The Perlora complex was inaugurated in 1954 and was open to workers and their families from across Spain. Companies, mostly state-owned, could lease the villas and would raffle off subsidized 15-day stays that included full room and board to well-behaved employees. Other workers like fishers and farmers who belonged to guilds were also given the option to stay in the hotel-like residential building, which was demolished when the complex closed.

“It was a double-edged sword. The regime was seeking to control leisure time and to foster certain values, not unlike the Google offices today,” says Tuñón Vega. “But the happiness and wellbeing that it meant for the workers who spent their holidays there isn’t erased by that intention.”

When the complex opened, Spain was extremely poor. Perlora Ciudad de Vacaciones had paved roads, running water, and electricity—novelties for many. In its heyday, the vacation city was “super chic,” according to Tuñón Vega, “a luxury resort before they existed.” For many of the workers and their families, this was the first time they’d taken a holiday, the first time they’d seen the sea. For women, it provided a rare respite from cooking and cleaning.

During its first years, Tuñón Vega says, the complex ran more like a military camp. The Spanish national anthem was played over speakers, there were flag-raising ceremonies, and the structure of activities was more hierarchical and rigid. But in 1959, after members of the Catholic sect Opus Dei took power away from the more hardcore European fascist group El Falange, the experience began to soften, and the focus shifted away from militarization toward family values.

In the 1960s and 1970s, the vacation city reached its pinnacle. It hosted as many as 2,000 people every 15 days from the beginning of June until mid-October. It had a cinema and hair salons, and one of the dining halls was converted into a part-time party hall. It employed around 200 workers, many of whom fell in love with locals and stayed in the area.

Already, the boldly modern architecture of the complex, though with some obvious nods to Asturian vernacular, broke away from fascist classicism that defined the earlier architecture of the regime (see: the Valley of the Fallen). The construction of the resort was overseen by the Somolinos brothers, two of the most prestigious architects working in the region at the time.

“It really is a treasure,” says the architect Cachán Vallina. “Mid-century modern architecture is starting to claim more importance. And this place is quite exemplary because the architecture has hardly been touched.”

After Spain transitioned to democracy, the complex was handed over to the regional government of Asturias in 1982. Although it continued to be offered to unionized workers, the complex slowly declined until all of its funky doors were finally locked in in the mid-aughts.

The left-wing regional government—which declined to comment for this article—still pays for the resort’s basic maintenance and security. In a letter replying to one of García Junquera’s complaints, it recognized that Perlora Ciudad de Vacaciones is “a focal point for hundreds of visitors,” but blamed “the behavior of seagulls” for much of the current disarray.

“Their inaction is more ideological than logical,” said Cachán Vallina. “My greatest fear is that a house will fall and hurt someone and then they’ll just tear the whole thing down.”

But as Perlora Ciudad de Vacaciones hovers on an ephemeral plane between fantasies of its past and future, some embrace its precarity. Besides the wistful regulars, it has also become a space for artists. For instance, Rodrigo Cuevas, the Asturian answer to Freddie Mercury, used the abandoned complex as a backdrop for a surreal music video. In June 2022, artist Olmo Cuña debuted a performance art exhibit, filmed with a Super 8 camera, about his interactions with the vacation city.

“My original intention was related to a place in ruins,” he says. “But after spending time here, I realized there’s still so much life in Perlora, so I made the piece became about me using the space as if it were my own. I love the attitude of people who come suntan on the porches like they’re at home. It’s a shame that it’s abandoned, but it also grants the opportunity to use it however we want.”

Podcast: Grittiness and Romanticism in New York and Paris

The Last Public Payphone Kiosk on the Streets of New York

How the once-ubiquitous convenience became a rare museum piece.
infrastructure

From Nodding Night Court to Dove Sail Lane, the town’s address choices are both practical and poetic.
Video