Making the Miraculous Cake of the Patron Saint of Bakers - Gastro Obscura
Want to see fewer ads? Become a Member. 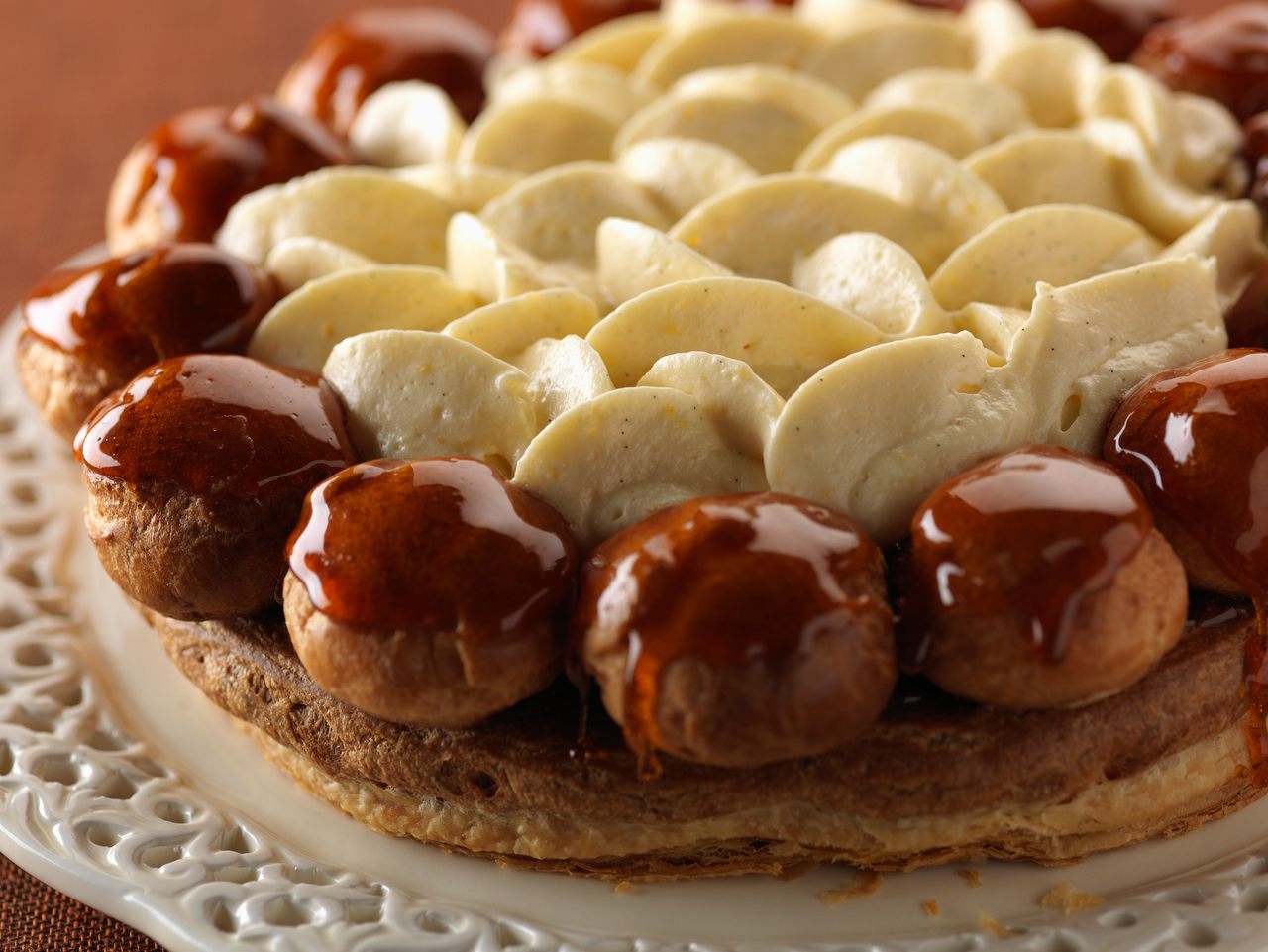 The cake has such an elegant presentation, you almost don't want to cut into it. Image Professionals GmbH / Alamy Stock Photo
In This Story
Destination Guide

A traditional gâteau St. Honoré consists of a round puff pastry base that gets encircled with a ring of choux pastry and caramel-topped choux pastry puffs, then filled with Chiboust or Chantilly cream (or both). The result is a heavenly halo of decadence. That is, when it’s executed perfectly. When it’s not, it can look like a deflated, cream-filled kiddie pool. On The Great British Baking Show, where making gâteau St. Honoré was a semi-final technical challenge, Prue Leith warned contestants, “This is very difficult to make look good.”

Since it assembles several building blocks of French pastry, such as puff and choux, making a beautiful gâteau St. Honoré is a fine showcase for a patissier’s skills. Although the cake is not well known outside of France, it’s an old-fashioned favorite in its homeland. Patisserie shelves boast traditional versions, single-serving mini gâteaus, and staggeringly inventive interpretations that play with shape, flavor, and toppings.

I love a cooking challenge. I’ve made 5,000-year-old energy bars, tested an archaeologist’s ancient Pompeii recipes, and sculpted marzipan in the shape of St. Agatha’s breasts. But I have no formal pastry training and, like many others, I’ve been put off by the intimidating world of French desserts. But in the spirit of St. Honoré’s feast day, which is May 16, I decided to give his namesake cake a shot. And so began what I dubbed “The Great Beatific Bake-Off.”

Before I embarked on my quest, I wanted to understand the man behind the cake. How did a bishop with no apparent baking experience become associated with a classic cake? Steven Laurence Kaplan, a historian of French baking, says the legends surrounding the saint certainly played a part, but it was really French baking guilds that cemented the saint’s status. In the 1700s, when guilds strictly regulated the craft, a chapel dedicated to St. Honoré served as the headquarters of a Parisian baking fraternity, giving the saint serious name recognition among bakers.

But Honoré’s popularity declined after guilds were abolished during the French Revolution in 1791. Although there are remnants of the saint’s symbolic power in some iconography (he is often depicted holding a baker’s peel or loaves of bread), Honoré has largely faded as a revered figure among pastry makers and bakers. “Today, bakers don’t give a damn about St. Honoré. And the vast majority of bakers have little idea of who he was and who he might be.”

Kaplan points out that some might vaguely know of Honoré through his connection to La Fête du Pain, a bread festival that begins on the saint’s feast day. However, on May 16, he says it’s the bread, not the saint, that’s the star.

The other way St. Honoré remains relevant is, of course, his namesake cake. The earliest recorded recipe for gâteau St. Honoré is from 1873’s Le Livre de Pâtisserie by the renowned French pastissier Jules Gouffé. Like most culinary origin stories, the exact history surrounding the creation of gâteau St. Honoré is murky, but most accounts center the cake’s creation around the mid-1800s. According to Larousse Gastronomique, an encyclopedia of French cuisine, gâteau St. Honoré was invented in 1846 by a pastry chef named Chiboust who worked on Paris’s Rue St. Honoré, a street named for the saint that was known for its many patisseries and bakeries. (This is also the origin of the name of the Chiboust cream that appears in gâteau St. Honoré, a blend of traditional pastry cream and Italian meringue.)

Maryann Tebben, a food historian at Bard College at Simon’s Rock in Great Barrington, Massachusetts, has thoroughly investigated the story of Mr. Chiboust. “I couldn’t find much else about him and I really looked. He probably was a pastry chef and he probably worked on that street, but that’s the dead end. He’s not named anywhere else, including his first name. It’s just his last name, which is suspicious.”

But Tebben points out that even if the origin story is apocryphal, it’s still significant. “To me, the legends are almost as important as the real story, because the French really sit on that, they enjoy it and they promote the myth. It’s important for desserts and other foods too.” And the intimidating reputation of gâteau St. Honoré is a big part of its mythology. “That’s the genius of French desserts,” she says.” They make it sound so complicated and you think, ‘Oh, I could never make it, it must be so important and hard.’”

Armed with an understanding of how this cake came to be, I was ready to tackle the challenge of making it. For advice, I consulted someone who’d recently trained in the art of French pastry. Brigitte Malivert studied at the Ferrandi School in Paris and was poised to start working in a local patisserie when COVID-19 hit France last year. She returned to New Jersey, where she runs a private pastry business. According to Malivert, the notorious gâteau is far more accessible than its reputation suggests.

“I really think they over-emphasize that it’s so difficult. Honestly if you follow directions, most recipes do a good job.” She notes that it’s really just a matter of assembling the basic building blocks of French pastry—such as puff and choux—into a new and elegant form. “If you break the process down into those smaller pieces, it’s doable.”

With the recipe below, I attempted to do just that. It’s broken into four parts: One for puff pastry (which you can also buy premade), one for choux pastry, one for Chiboust cream, and one for assembly. A few deep breaths wouldn’t hurt, either. Malivert says that starting from a place of anxiety is especially bad for pastry-making: “I always say when you’re working with puff pastry that it senses when you’re nervous. If you’re sweating or hot, it affects the layers.”

Special Equipment:
Piping bags and tips (or a Ziplock-type bag with a corner cut off)

Adapted from Baking a Moment

Cracking the Code of Letterlocking

The infamous ‘Don’t Ask Cake’ is better than it sounds.
saints

The Bone-Shaped Sweets That Honor the Dead in Spain

Make the marzipan "limbs" that commemorate loved ones on All Saints' Day and All Souls' Day.
saints

Born in an era of rations, these scrappy recipes relied on cheap pantry staples.
Video • Wonder From Home

Once a 19th-century brasserie, this McDonald's exterior celebrates Alsatian design and the "King of Beer."
Paris, France

This frog-themed restaurant was frequented by Picasso, Saint-Exupéry, and more.
Paris, France