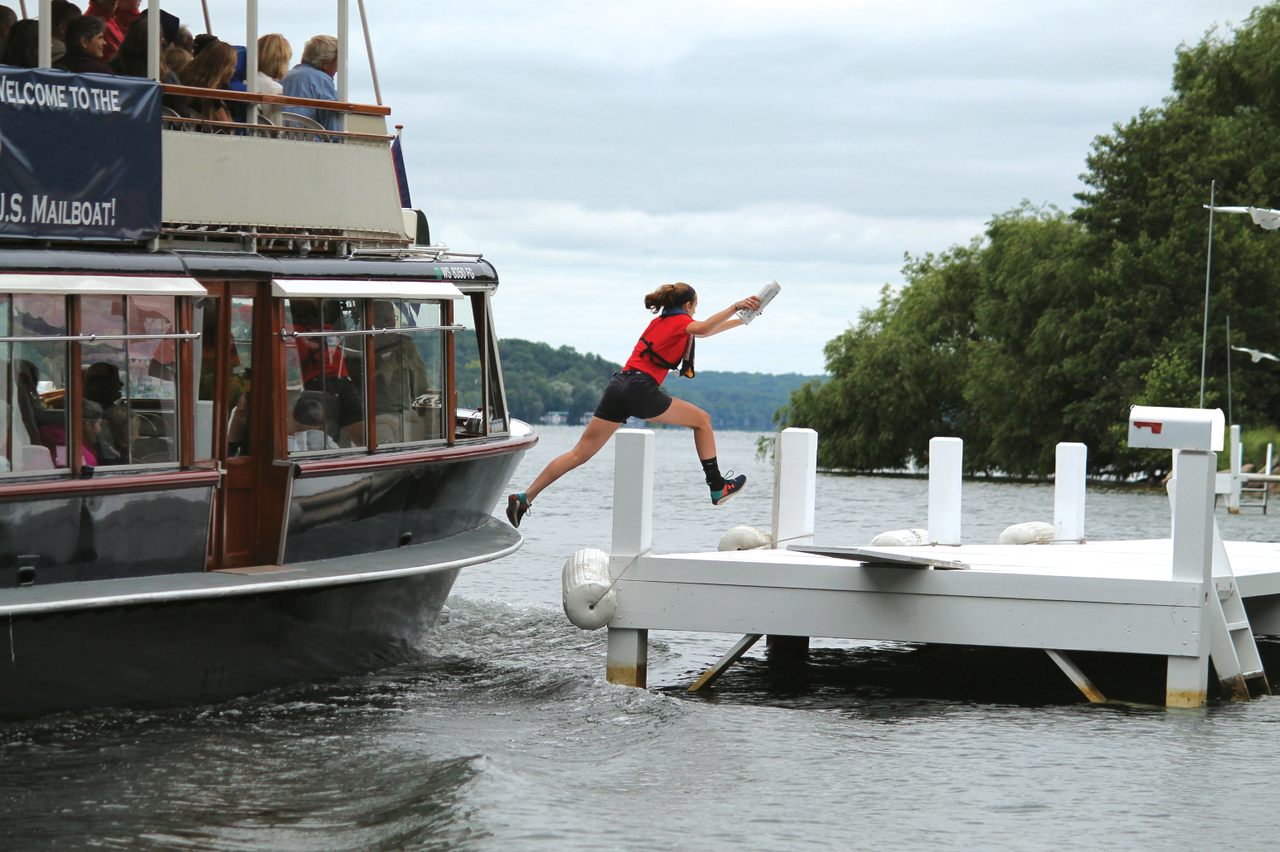 More than 100 passengers watch as Jessa Burling leaps across the waters of Lake Geneva to deliver the mail. Courtesy Lake Geneva Cruise Lines
In This Story
Destination Guide

The teenager straddles the window’s edge, calculating the distance to the dock. Dressed in a casual uniform of blue shorts and a red polo shirt, he is poised and athletic, his hand gripping a newspaper with mail nestled inside. The double-decker boat—large enough to seat 160 passengers—slows as it navigates toward the pier, but it never stops. The teenager rises and leaps from the window, right foot landing on the dock, then it’s a mad dash to the mailbox, a pivot, and another leap, left foot landing on the runner of the moving boat. The crowd cheers and the teen smiles and returns to the front, preparing for the next jump as the Walworth II delivers the U.S. mail to the waterfront residents of Lake Geneva, Wisconsin.

The town is the first and only one in the United States where jumpers deliver mail from a passenger-carrying mailboat, a tradition that began in 1916 when the primitive roads were too difficult to traverse. It has continued uninterrupted, May through September, for the last 105 years.

To be a mail jumper—in 1921 or 2021—requires athleticism, agility, personality, and communication skills. The six jumpers selected each year are preserving the town’s history, but most are teens just seeking, as they call it, “a really cool summer job.”

Sid Pearl, a 17-year-old senior from Park Ridge, Illinois, whose antics had the crowd applauding, just completed his second year of jumping. He never worried much about missing the boat on his jumps; he’s a member of the high school swim team. Taking the leap in front of 160 people, however, is a bit more intimidating. Pearl recalled his first day on the job. “Let’s just say that the first time I jumped, I was way more worried about the jumping than the mail delivery. Even though I made it, the first jump of the day is still always a little nerve-racking.”

Each jumper makes 45 to 60 jumps a day, and any number of obstacles can make the landing and run to the mailbox a challenge. Pearl has fallen eight times, sometimes in ways he never expected. “It was a simpler pier,” he said of one tumble, “but the kids had been swimming so the surface was wet. I hit the pier and slipped, twisting my knee, which slowed me down. When I tried to jump back onto the tail-end of the stern, I missed.”

Pearl climbed the swim ladder and waited on the pier for the captain to circle back. As the boat neared, he heard the spectators cheering. “They were absolutely thrilled,” he said, and ever since, Pearl doesn’t get embarrassed if he falls. “You gotta give the crowd what they want,” he said.

He was relieved, however, that one customer did not sign up for mailboat delivery this year. “I called this particular dock the ‘Walk the plank delivery.’ The boat nosed in and pulled up to a diving board. I had to jump onto the board and run across it to deliver the mail. I fell three times.”

The jumpers’ day begins at the post office at 7 a.m., when they arrive to pick up the mail. From there, they sort it into slots in the boat’s front cabin and prepare for launch. They greet passengers and smile for photos, then take their spots to plan for their first jump, all the while knowing that cameras are clicking and video is rolling.

Since this is a true mail and newspaper delivery, it sometimes involves packages. In that case, the captain blows the horn, alerting the customer to be at the dock for the hand-off. The largest item ever delivered? A flat-screen TV.

And then there’s the entertainment value of the dog pick-up. Some families train their dogs to respond to the horn, dash from the house, run down the pier, and collect the mail, human to canine. The cameras, of course, go wild.

As entertaining as the jumping is, though, it is only half of the job. In between deliveries, the jumpers also narrate the tour of the lake and the mansions and estates that dot its perimeter. The summer homes of the wealthiest Chicago families, including the Maytags, Wrigleys, and Schwinns, can best be viewed from the water, and the mailboat gets up close and personal with all of them.

Sometimes, mail jumping is a family affair. Jessa Burling is now a college senior who jumped her sophomore through senior years of high school. Burling’s mother, aunt, and older brother were all mail jumpers; in fact, she jumped with her brother Brad, performing some sibling stunts for the passengers. Her mother has worked in the marina office since graduating from college, and while she didn’t push her kids to be jumpers, she was thrilled with their decision. “We had the same captain as [our mother did] when she jumped, so it was very much a full-circle moment for her,” Burling said.

Burling said that being a mailboat jumper has permeated her life. “When you start, it’s with the intention of having a cool summer job, but the more you listen to the words you’re saying on the tour, the more appreciation you gain for the tradition and the more respect you acquire for the past.”

Little about the mailboat jumping tradition has changed in the past 100-plus years, with one exception: the inclusion of women. Elaine Kanelos, author of the self-published book Mail Jumper!, jumped for two years starting in 1974, breaking a 60-year tradition of all-male jumpers. “I had grown up on Lake Geneva and we always got our mail by boat,” she said. “I remember being six years old, out playing and swimming, and forever looking for the mailboat. It was such a unique and special part of life.”

As a freshman at the University of Colorado, Kanelos wrote a letter to Bill Gage Sr., then the owner of the marina. “It was during the women’s lib days. I did a big sell job on why he should hire a girl. ‘I know I can do it,’ I insisted. ‘You should give a girl a chance.’ And he did,” she recalled. “The best part was, he had exactly the same expectations for me as he had for the boys.”

Gage’s only instructions on the first day: “You know what it looks like. Go!”

Five years ago, the cruise line celebrated its 100th anniversary and invited former jumpers to return for a jump. Kanelos was 60 years old and relieved that the boat had been made much longer to accommodate more passengers. This gave her a few more seconds to jump off and on, and she enjoyed it so much, she completed half the jumps on the tour that day.

Lake Geneva treasures its mailboat jumping as a beloved tradition, and Kanelos would do anything to preserve it. “It’s so special for the people who get to experience it, to get that close to the houses, to experience the fun of watching someone jump off a moving boat. I hope it goes on for another hundred years.”

How Did a World War II Boat End Up at the Bottom of a California Lake?

The discovery, retrieval, and mysterious history of a ‘ghost boat.’
boats

Provence's négo chin boats have made a comeback thanks almost entirely to one man in love with his local waterway.
boats

Jill and Jim Koch have been delivering mail by boat to Hells Canyon for decades, following a century-old route.
museums