Women in Northern Kenya Rally to Save a Forest - Atlas Obscura
Want to see fewer ads? Become a Member. 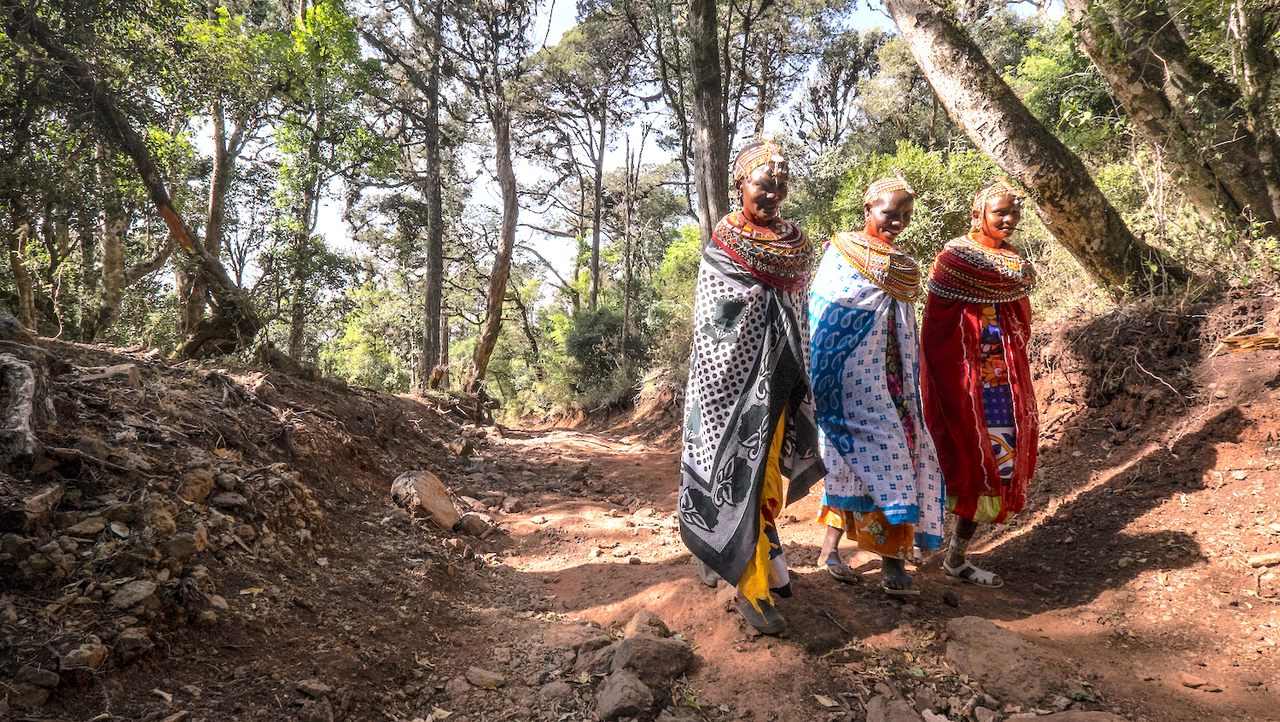 This story was originally published in Yale Environment 360 and appears here as part of the Climate Desk collaboration.

Like their Samburu ancestors going back to the 15th century, Pamela Lonolngenje’s family has been literally on the move for hundreds of years. One of around a half-dozen semi-nomadic tribes in the vast drylands of northern Kenya, the family spent years shifting locations to find water and grazing land for their goats and cattle, their primary source of income.

Yet land conflicts, deadly cattle disputes with neighboring tribes, and drier, more drought-prone conditions due to climate change forced the family eight years ago to sell its livestock and move into the nearby Kirisia forest, a critical ecosystem for local populations during dry seasons and droughts. Their only income was collecting and burning firewood to make charcoal—a back-breaking task that earned them about $9 a week. It was also untenable due to government crackdowns on illegal logging in the national forest which, at 226,000 acres, is larger than New York City.

Today, Lonolngenje is protecting trees she once would have cut down. She is among 550 Samburu women whom the government has tasked to safeguard a large swath of the dense mountainous forest that gets around two feet of rain annually due to its 7,000-foot elevation. Surrounded on all sides by parched, barren land and the occasional scraggly tree, Kirisia is the only source of reliable water for the nearly 150,000 people living in the area, as well as for the rich array of wildlife, including elephants, zebras, and Masai giraffe.

Lonolngenje is part of an unusual climate adaptation project that is helping once-marginalized Samburu women earn money and manage a vital natural resource as climate change disrupts the environment around them. Instead of razing trees, they are now planting them. When they enter the forest, they do so in groups to ensure that everyone follows strict stewardship rules. They also participate at the top levels of the forest management association.

“I’m really happy to be out of the forest—I’m also happy that women are taking part in decision-making,” said Lonolngenje, a 30-year-old mother of four, who lives just outside the forest and runs a small food kiosk with two other Samburu women. She still collects firewood in the forest twice a week, but she only uses wood from fallen trees. “I no longer cut trees down.”

Lonolngenje’s newfound stewardship responsibilities are part of a broad shift of changing gender roles in northern Kenya and other parts of sub-Saharan Africa. As traditional livelihoods for men, such as livestock herding, have eroded, women have been forced to earn money for the first time. Facing worsening droughts, Samburu men leave for months searching for pasture or for new jobs, oftentimes in cities. That leaves women not only to manage the household but also to earn enough money to live in their partner’s absence.

In some cases, the women’s opportunities are being aided by the growing willingness of governments to let local populations manage their natural resources — a strategy borne out by studies showing they are better custodians. This has been particularly true in Kenya, where community groups are playing a prominent role in managing major forests. Other African countries, particularly Tanzania, also are embracing this approach.

For advocates concerned about climate change’s disproportionate impacts on poor and marginalized populations, especially women, these are welcome shifts.

“Samburu women, along with their children, often struggle the most when climate change and other factors are making their traditional lifestyle more challenging,” said Heather McGray, director of the Washington, D.C.-based Climate Justice Resilience Fund (CJRF), which helps fund the forest project. “This project is really exciting as a climate adaptation model. It’s putting power in their hands.”

The project is being coordinated by the BOMA Project, a nonprofit focused on women’s empowerment in Africa’s drylands. In June, BOMA received a $10 million donation from philanthropist MacKenzie Scott, who was formerly married to Amazon founder Jeff Bezos and has given away $8 billion over the past 11 months to hundreds of organizations.

Northern Kenya—and the 310,000 Samburu people who live there—is experiencing many of the most damaging impacts of climate change. From 1985 to 2015, average temperatures in Kenya rose by 1.8 degrees Fahrenheit, with higher increases occurring in arid and semi-arid regions in the north, according to a 2018 Kenya climate profile. While overall precipitation levels have remained unchanged, rainfall patterns are dramatically different. Annual rainy seasons are shorter and less reliable, while intense rain events are more frequent. As a result, drought and extreme flooding events are increasing.

Hotter conditions, combined with intense population and land pressures in this fast-growing country, are taking a toll on northern Kenya’s montane forests—called “water towers” because of their ability to store water during rainy seasons and release it slowly during dry periods. Among the biggest problems is deforestation.

From 1973 to 2015, Kirisia forest lost 21 percent of its tree cover, with the biggest losses being indigenous species like rare sandalwood and red cedar, which is hugely popular for firewood and building materials, according to a University of Nairobi study that cited charcoal burning, illegal logging, and livestock foraging as primary factors in forest loss.

Cattle populations in Kenya’s semi-arid regions are also declining due to climate change. Over the past 30 years, their numbers have dropped by 26 percent overall and nearly 60 percent in parts of northern Kenya, according to a 2018 study.

“The underlying reason is the increase in temperatures and reduced rainfall,” said Mohammed Said, the report’s lead researcher.

As her husband traveled farther to find suitable grazing lands, Lonolngenje began looking for her own opportunities to make money. She had dreamed of becoming a teacher but abandoned the idea when her parents died. “I already had children,” she said. “I was now responsible for my siblings as well.”

She moved into the forest to collect firewood and burn charcoal illegally. But it didn’t last. “The rangers were constantly arresting us and chasing us out of the forest,” she said. “I was really struggling to make a living.”

Her breakthrough came in 2019. Several months after she and dozens of other Samburu families were evicted from the forest, Lonolngenje was selected by BOMA to participate in a women’s empowerment program.

She and two other Samburu women received training on running a small business, including record-keeping, marketing and financial planning. With a small business grant, they opened a food kiosk in a town just outside the forest.

“We were able to make $530 in profit within a few months,” she said, a huge sum in a region where people often earn less than $2 a day.

Her second breakthrough came a year later when the county government was looking for community groups to manage critical local ecosystems in northern Kenya that are threatened by climate change. The local government picked an association of Samburu women, including Lonolngenje, to protect the Samburu County section of Kirisia forest.

The forest is managed by a Community Forest Association with more than 550 Samburu women as members. The women can use the forest but under strict protocols outlined in a forest management plan they helped develop. Among the core guidelines: In addition to only entering the forest in groups, they are prohibited from felling indigenous trees (such as cedar) and burning charcoal, and any illegal activity must be reported immediately to a warden. Beekeeping and medicinal gum-resin harvesting are allowed, as is tree planting that helps restore the forest’s indigenous tree cover. The women are also establishing tree nurseries outside the forest, enabling them to sell seedlings to private landowners.

The more decentralized management approach—hundreds of local eyes and ears instead of a handful of government rangers—is showing signs of success. Among the indicators: No Samburu families are living in the forest illegally; more than 30,000 trees have been replanted; and income-generating activities such as beekeeping are growing.

Douglas Leboyare, a Samburu elder who chairs the Community Forest Association, said that hundreds more Samburu women are joining the association, which is expected to hit 2,000 members by year’s end.

“The government was not well positioned to protect the forest because they only had five rangers,” said Leboyare. “It’s made a big difference having the community in charge.”

Kenya’s government has been at the forefront of these community-led efforts. Under its new constitution, adopted in 2010, the government formally recognizes community resource plans and the rights of local user groups to protect forests, grazing lands, and water resources. The government is also pursuing a climate adaptation agenda, which includes its commitment, along with 50 other countries, to protect at least 30 percent of its lands by 2030. A key part of this effort is the Greening Kenya initiative, which calls for 10 percent tree cover through nationwide tree planting and a crackdown on illegal charcoal burning.

With the Samburu adaptation project, Lonolngenje’s life has improved dramatically. She is making enough money to pay for her children’s school fees, and she and her business partners have started a second business buying and selling goats and sheep.

“Protecting the forest doesn’t mean we have to give up our livelihoods,” she said. “We can actually make more money by taking care of the land that is our home.”

How a Rebellion Planted Seeds of Revival in Rural Mexico

In 2011, the women of Cherán led a revolt against illegal logging and corruption. Today, the forests are coming back, and the Indigenous community is returning to its roots.
science

The Scotty Creek facility was part of an unprecedented First Nations effort to study and save the Arctic. Then the fire came.
List