The Ghostly Japanese Fireball Spirits That Live On in Pokémon - Atlas Obscura
Want to see fewer ads? Become a Member. 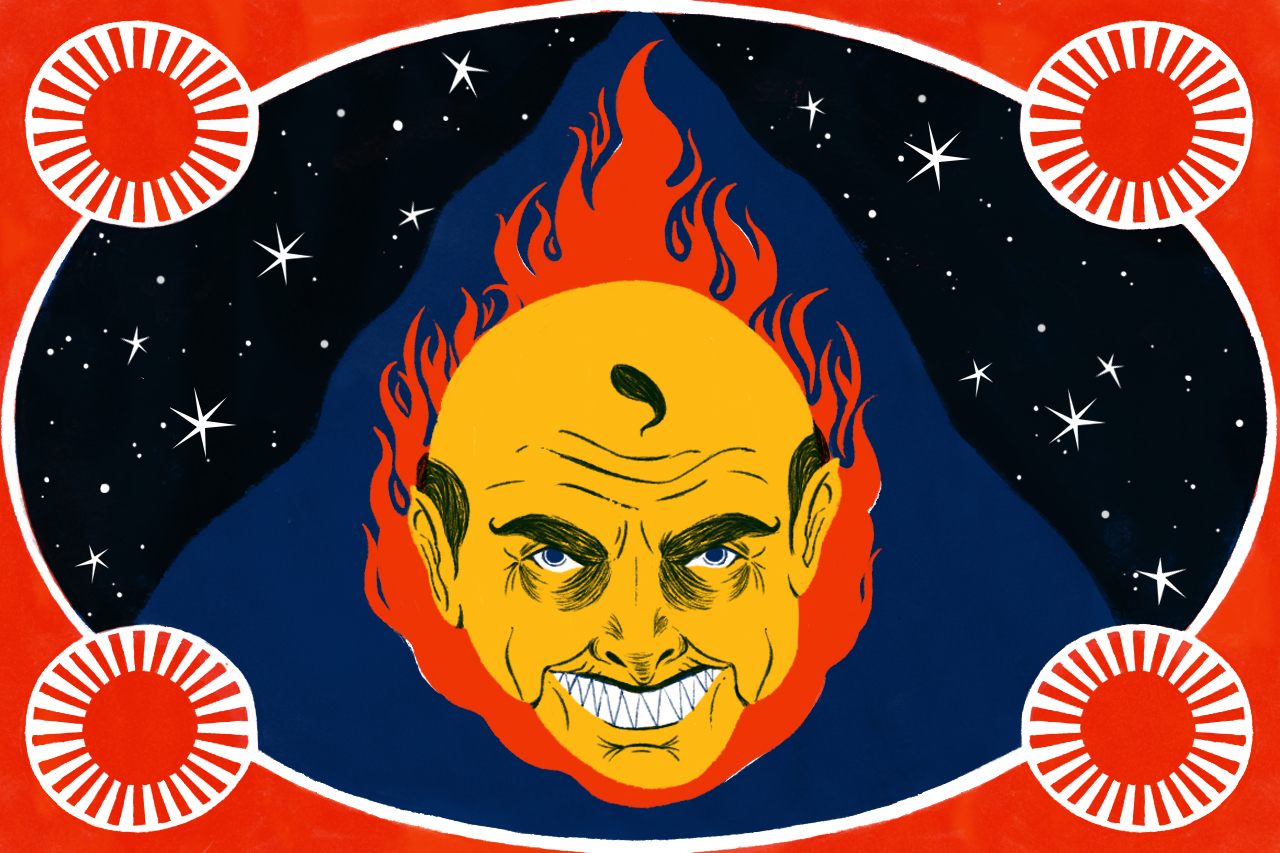 Sōgen-bi is one of the ghoulish creatures in Japanese folklore known as yōkai, or demons. CARMEN DEÑÓ
In This Story
Destination Guide

5 Articles
34 Places
This week we’re looking at the ways that ghostly and ghastly tales evolve—shifting shape, but never quite dying out. Previously: the afterlife of Detroit’s little red demon, and how Demogorgon went from scribal error to “Stranger Things.”

In 1666, a year that some might consider spooky, a 16-volume collection of scary stories came out in Japan, called the Otogibōko. One story concerns a monk named Sōgen, who lived in the temple of Mibu-dera in southern Kyoto. Sōgen was a lackluster monk, frequently stealing money and precious oil intended to be an offering to the gods. Sōgen died unpunished, but the gods knew of his crimes, so they gave him the cruel, celestially righteous punishment of spending eternity as a floating head in a fireball.

Sōgen-bi is one of the ghoulish creatures in Japanese folklore known as yōkai, or demons. Yōkai take many other bizarre forms, such as Waniguchi, shrine bells with reptilian bodies, and Kasa-obake, umbrellas with one eye and one leg. The creatures gained mainstream notoriety during Japan’s Edo period (1603–1868), when art and literature became available to and produced for the masses, says Rebekah Harmon, author of Yokaigrove.com. The scholar and artist Toriyama Sekien cemented the vast canon of yōkai in The Illustrated Night Parade of One Hundred Demons, which depicts the disgruntled head of Sōgen-bi wobbling in the air above a meandering stream.

Sōgen-bi, which translates to “Sōgen-fire,” is one of many fireball yōkai. They’re so common that they form their own distinct category: hi-no-tama, which translates to “orbs of fire.” Under the umbrella of hi-no-tama, there are even more subcategories, including onibi, which refers to strange blue lights that appear at sites of battle; kitsunebi, which refers to any fire created by magical foxes; and hitodama, which encompass the “benign manifestation of human souls,” Harmon says. Sōgen-bi falls in the last camp.

Though Hitodama is written using the kanji for “human souls,” they are not ghosts. “Hitodama are actually more of a generic supernatural phenomena that’s associated with graveyards and haunted places and spooky situations in Japanese folklore,” Hiroko Yoda, who translated Sekien’s yōkai encyclopedia with Matt Alt, writes in an email. “Although they’re found in the same sorts of places, the big difference between them and ghosts are that hitodama generally don’t have their own stories or personalities.”

The Illustrated Night Parade of One Hundred Demons catalogs a plethora of ghostly fires, including Sōgen-bi, Chōchin-bi (lantern fire), Shiranui (unknown fire), and Kosenjō-no-hi (old battleground fire), Yoda says. Harmon believes that Sōgen-bi is a much more recent legend than other examples of hi-no-tama, a cautionary supernatural tale that was imported with Buddhism. “Punishment in the afterlife for one’s sins was not an indigenous belief in Japan,” she says, adding that people only came back as restless spirits if they died of betrayal or violence, or if their relatives did not perform the appropriate burial rites.

Unlike more corporeal yōkai, which seem to have no origin in the real world, hitodama likely originated as a way to explain will-o-the-wisps and other mysterious, naturally-occuring lights. “There’s one called Aosagi-no-hi (Heron-fire) that is a glowing great blue heron,” Yoda says, adding that England has a similar heron spirit that likely originated in a spooklight.

Today, the digital descendants of yōkai can be spotted in many games, particularly in the world of Pokémon. “I don’t believe it’s ever been directly addressed by the creators, but fans have always made a lot of connections between the Pokémon and yōkai,” says Michael Goldstein, who wrote The Yōkai Character Collection. Fans frequently connect the Pokémon Gastly, which resembles a face floating in a ball of purple fire, to Sōgen-bi and other hitodama. “Gastly’s Japanese name is Ghos, which is obviously taken from ‘ghost,’” Yoda says. He thinks that Pokémon probably references hitodama in general, rather than Sōgen-bi in particular.

Other examples abound. Bloggers recognize the Shiftry, a Pokémon that resembles a maned animal with leaves for hands, as a modern-day version of tengu yōkai, a heavenly dog that wields magical fans made of leaves. The most explicit example of this connection may be Froslass, an Ice/Ghost-type Pokémon that seems to be an incarnation of the yōkai Yuki-Onna, a beautiful woman who appears in the snow and preys on lost travelers. In the game, a Pokédex entry for Frosslass reads: “Legends in snowy regions say that a woman who was lost on an icy mountain was reborn as FROSLASS.” And the official Yu-Gi-Oh! trading card game includes a monster card called the “Hinotama Soul,” which speaks for itself.

According to Harmon, other Yōkai live on in Nintendo’s video games. Consider the tale of the mountain hag Yama-uba. “In old stories, her body turns into gold and fine silks after she is killed,” she says. “Allegedly, this was the inspiration that led to defeated enemies turning into coins.” For those playing Mario Party anywhere near Kyoto, be grateful that Sōgen-bi no longer has hands—otherwise he might come for your coins.

They are haunted, but not by ghosts.
ghosts

Read some of our readers' favorite spooky tales from very close to home.
haunted

Depending on the ghosts, it might fetch a premium.
Video