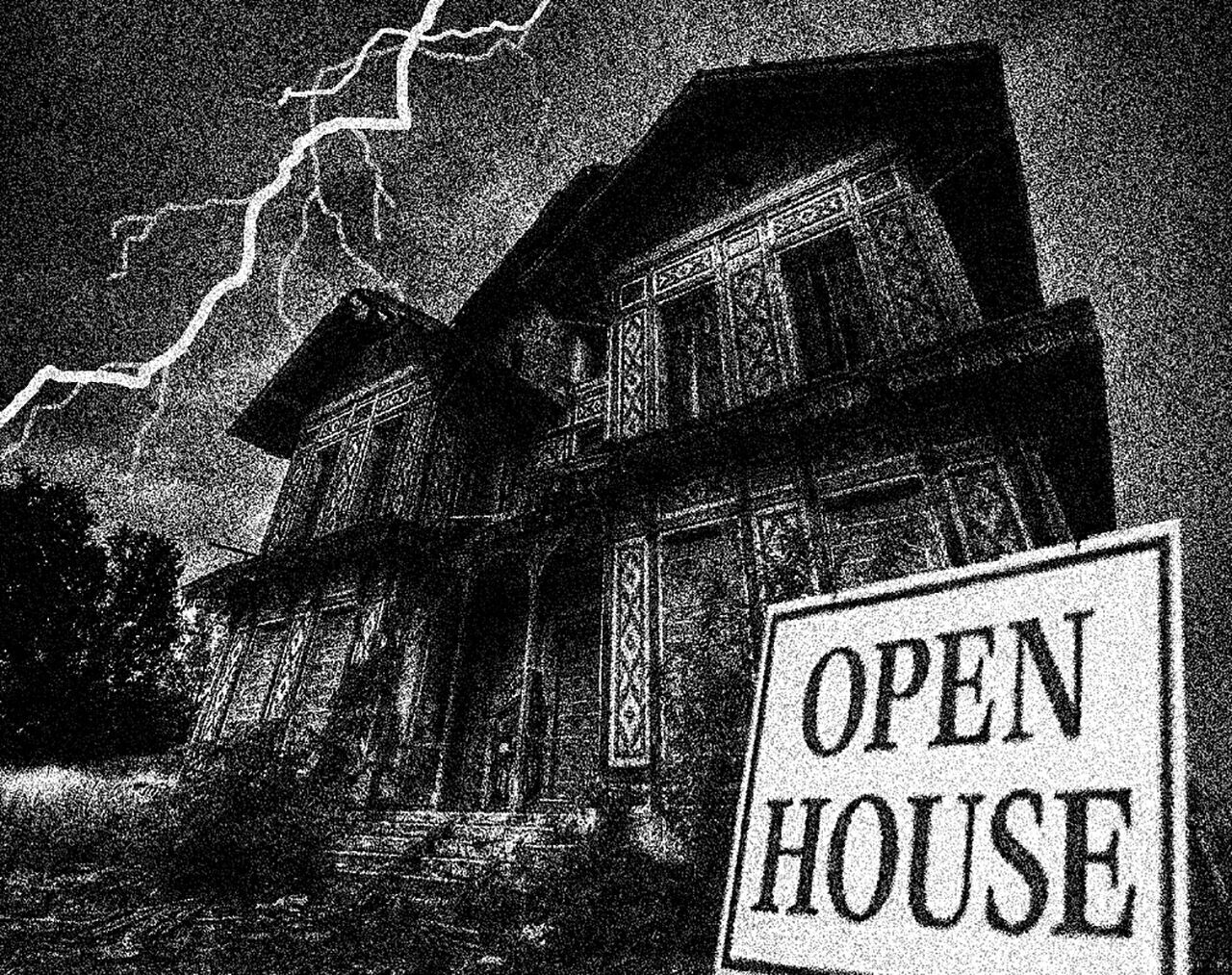 One Laveta Place, in the charming hamlet of Nyack, New York, lies on the Hudson River, about an hour north of New York City. It’s a beautiful old Victorian, built in 1890, its sprawling 4,600 square feet complete with five bedrooms and five bathrooms. The house has previously been owned by Adam Brooks, the director and writer of the 2008 rom-com Definitely, Maybe, as well as singer-songwriter Ingrid Michaelson. It’s currently owned by Jewish (formerly Hasidic) reggae artist Matisyahu, who recently put the house on the market for $1.9 million.

The real estate listing boasts of river views, an in-ground saltwater spa pool, and a beautiful wrap-around porch. It does not mention that the house is haunted and was the subject of one of the funniest and most famous real estate legal cases of the past 50 years. It’s taught in law schools as the “Ghostbusters Ruling.”

One Laveta Place is just one of dozens of purportedly haunted houses currently for sale. Selling a haunted house is a complex negotiation, a mash-up of local laws, local culture, and local lore. It isn’t even necessarily a bad thing for real estate sales; the Nyack house has in the past sold for significantly more money than comparable houses in the area, due to its infamy. Maybe Matisyahu loves ghosts. Or at least arcane legal history.

Real estate law is, with a few exceptions, dependent on state rather than federal statutes. (Those exceptions include disclosures for stuff like asbestos and lead paint.) States have wildly different requirements for what’s called disclosure, or what a buyer has a right to know about a house before the purchase is complete. “About half the states are disclosure states, and half are called caveat emptor,” says Randall Bell.

Bell is a real estate appraiser; he assigns dollar values to damages to a property. That means that Bell is often called in for pretty normal stuff, like figuring out how much a property that has been damaged by a natural disaster is really worth. But he’s also perhaps the nation’s foremost appraiser of, as E.J. Dickson at Rolling Stone put it, “the world’s most gruesome murder sites.” Bell, who is based in Los Angeles, has worked on the site of the Tate-LaBianca murders, as well as the house where JonBenét Ramsey was killed, and where Nicole Brown Simpson and Ron Goldman were murdered, among many others. So he has a little experience in moving real estate with a dark history.

Bell has also dealt with haunted houses, which of course are not really the same thing as houses where a real, actual murder has taken place. But what’s interesting is that in the eyes of the law, these two factors fall under the same umbrella. It’s a little bit cold and calculating, but in real estate law, an on-site, prior murder and a supposed ghost are both issues that do not affect the physical state of the house, but can impact both that home’s value and the experience of living there.

A disclosure state, Bell explains, requires sellers to provide a fair amount of information on the state of the roof, the foundation, the appliances, whether there has been water or smoke damage, that kind of thing. The precise level of information varies—New York and California are particularly strict, he says—but in general, there’s a big form the seller has to fill out truthfully.

Caveat emptor, Latin for “buyer beware,” is the opposite. In states employing this guideline—Alabama, Arkansas, North Dakota, West Virginia, and Wyoming, for example—there’s generally a rule stating that a seller or seller’s representative must be truthful if asked direct questions, but that the seller is under no obligation to volunteer information.

“The number of things you could potentially disclose is in the hundreds,” says Bell. Many states use a pretty standard checklist form without any weirdness, but not all. Several states, including Colorado, Illinois, Indiana, and Missouri, require the seller to disclose if the house was ever used to cook methamphetamine (which can leave behind hazardous waste). In Mississippi, the seller is required to state if there are hardwood floors underneath the carpet or linoleum, and also what kind of internet access the house has, which is pretty generous.

Among disclosure states, there’s also a term called “stigmatized property.” That refers to things that have, or may have, happened in the house or on the property that are not material damages. Most commonly that means crime: murder, suicide, or burglary. The most important legal precedent in this area comes from a 1983 case in California called Reed v. King. Dorris Reed purchased a house from Robert King, unaware that a woman and her four children had been murdered there in grisly fashion 10 years prior. The big issue here is that King was not only aware of the crime, but had actually asked neighbors not to reveal anything about it to potential buyers. The disclosure element—in which a seller is obligated to reveal facts about a property without specifically being asked—is vital here, because no physical home inspection can turn up a murder, and the buyer may not think to ask. That case created this idea of stigmatized properties: something, likely invisible, and probably intangible, about a property that can affect what it’s like to live in or sell that property in the future.

This brings us to the 1991 court case involving Matisyahu’s house in Nyack. The Nyack case is technically called Stambovsky v. Ackley. Helen Ackley, the owner of the house at the time, was trying to sell the property to one Jeffrey Stambovsky. Stambovsky agreed and made a down payment—only to discover that the house was believed to be haunted. Ackley had, in fact, repeatedly boasted that the house was haunted, including in a Reader’s Digest story called “Our Haunted House on the Hudson.” Ackley claimed to have seen several ghosts, including a Revolutionary War soldier and one that apparently approved her choice of paint color. There were also reports of phantom footsteps, gifts that would later vanish, and a child woken up each morning by a ghost shaking her bed. The interactions were, however, described as peaceful.

Stambovsky sued Ackley for not disclosing that the house was haunted. After an initial dismissal—New York was a caveat emptor state at the time—the verdict was overturned on appeal, with the court finding that Ackley had deliberately concealed information that could affect the value of the house. The majority opinion of the New York Supreme Court Appellate Division, written by Justice Israel Rubin, is extremely funny and full of puns and wordplay:

In the interest of avoiding such untenable consequences, the notion that a haunting is a condition which can and should be ascertained upon reasonable inspection of the premises is a hobgoblin which should be exorcised from the body of legal precedent and laid quietly to rest.

Partly as a result of that ruling, today’s real estate sellers are often required to note if a house is generally believed to be haunted. There is no specific question in any of the state disclosure forms I read, but rather a more general question asking if there are any other factors potentially affecting the home’s value or the well-being of the home’s owner. “If asked, I’d say, ‘Yeah, if it’s got a reputation of being haunted, you should disclose,’” says Bell.

There are some exceptions. Arizona explicitly does not require the disclosure of murder in the house, even if the seller is asked. The seller cannot lie, but can simply say, “I am not legally required to answer that question.” This is kind of a giveaway, you can imagine. In California, you must disclose any death in the house within the past three years, but you are legally forbidden to disclose whether a person with HIV or AIDS lived or died in the house, even if asked.

It seems likely that living in a house where someone was killed is not much of a draw for the vast majority of potential homebuyers. But a haunted house disclosure is not necessarily a dealbreaker. “For some people, that’s what they want,” says Bell. Sure, sometimes a haunting can be a turn-off, but it all depends on the market and, well, the ghosts. In the case of the Nyack home, the house’s famous paranormal and legal status has probably boosted its price. In the past, it’s sold for significantly more than comparable houses in the area; in 2019 it’s listed for substantially more, per square foot, than other houses in Nyack, though it’s also a very nice house that’s literally on the Hudson River.

In New Orleans, a city absolutely saturated with ghosts, some real estate brokers add an additional little sign to their “For Sale” placards. In other cities, this kind of sign might read “Newly Renovated” or “Price Drop,” but in New Orleans and a few other places, some say “Haunted” or “Not Haunted.” In a city with such a rich history of the supernatural, these haunted houses can sometimes demand a premium. Magnolia Mansion, among the most famous haunted houses in the city, was listed for nearly $5 million in 2016.

So maybe Matisyahu isn’t crazy to ask for a little more for his gently haunted house. After all, there are plenty of million-dollar houses with saltwater spa pools. But how many of them come with poltergeists who can critique your interior design choices?

Shortly before opening night, vicious winds ripped the roof off of their homemade haunt.
haunted

Its spirit culture is unlike any in the world.
black magic

A guide to traveling with "the wickedest man in the world."
architecture

Jobie Hill has visited 700 former residences. Many have been abandoned. Some have become storage space. Others are B&Bs.
Video • AO Docs

They are haunted, but not by ghosts.
Read more
Thanks for sharing!