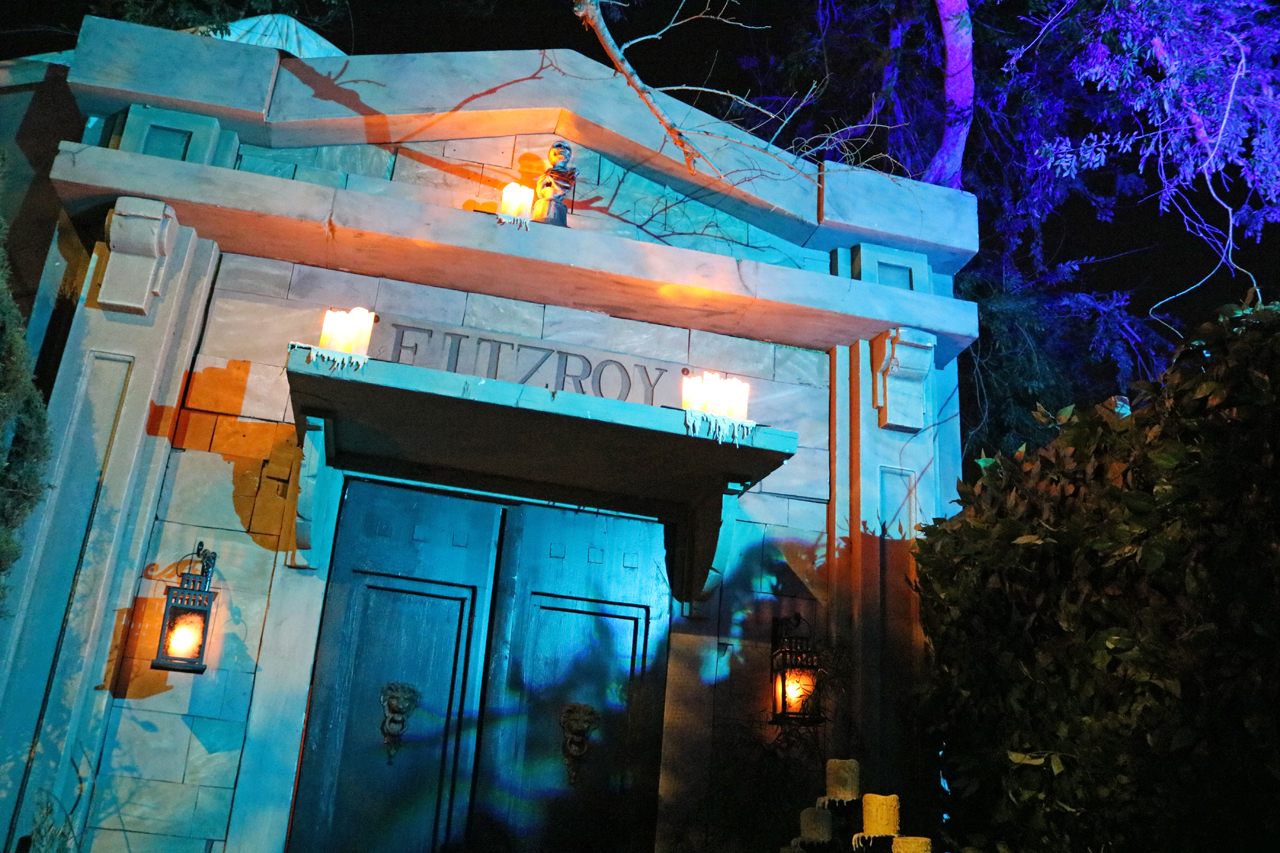 The Fitzroy Mausoleum at night, ready to scare visitors. Shannon Brown
In This Story
Place

London's creepiest cemetery was once the site of dueling magicians and mobs of stake-carrying vampire hunters.
Destination Guide

This year, Troy Yu and Aaron Bolton spent more than a thousand hours building Gothic Hills Cemetery, an elaborate haunted house in California’s San Fernando Valley. But a few weeks ago, vicious winds ripped through the neighborhood, tearing the roof off of a majority of the walkthrough and damaging other central set pieces. Opening night was just two weeks away.

Yu wasn’t sure that all the hard work could be salvaged. He wrote to his followers online, “We’ve suffered nearly complete destruction of our haunt in the 60mph winds we had last night.” The final room of the haunt, considered the most impressive part of the attraction, was hit the hardest. With ceiling framing and walls now lying on the ground, Troy went on, “We’re assessing the damage and will update when we know where to go from here. It seems no matter how much we try to increase our wind-worthiness each year, the winds have got news for us.”

After much debate, Yu and Bolton made a decision. Even though their creation was in tatters, they were going to try to reconstruct it. They put out a call asking for volunteers to help with repairs, and covered the cost of unexpected damage themselves. Their efforts went into overtime. They did have one comforting thought: This was not the first time they’d constructed a haunted house on a seemingly impossible deadline. And this time, they had a community to help them.

Between the dusty, sun-bleached mountains of the San Fernando Valley are numerous cookie-cutter suburban homes. Many are barely decorated, save for the occasional American flag or party store skeleton. They seem to blend into each other, one family home after the next, until visitors come upon Gothic Hill Cemetery’s corner property.

On a warm day in October, Troy Yu is waiting behind a billowing gray Grim Reaper cloak that covers his front door. He’s wearing a Gothic Hills t-shirt designed by Bolton, flamingo shorts, and socked feet. The interior of his home looks like any other: a large, comfy sectional, dogs demanding belly rubs, a few fall decorations. But one thing stands out—there’s almost no natural light coming from the patio door. Yu’s family gives up space and comfort for the sake of the haunt.

Outside, jack-o-lanterns and headstones are secured to the ground with construction-grade rebar, to help keep set pieces in place against the harsh winds. Yu is followed by Bolton, wearing the shirt he designed and a pair of paint-stained shorts, and their security team—Yu’s two cuddly brown dogs, Pixel and Jax. Together they explain the story behind the haunt’s inhabitants: the Fitzroy family, which has hundreds of pages of backstory that guests may never see. The Gothic Hills team keeps the story as an always-evolving reference, to help inform and inspire their decisions within the homegrown attraction.

Yu and Bolton have designed the haunt to look like a historic family mausoleum, complete with handmade decor and multimedia components. It takes up the entirety of the backyard, butting up against the house. Visitors will pass the large, imposing mausoleum facade and follow a tour guide into the halls that begin the haunt.

Yu, who owns the house, is executive director of Gothic Hills Cemetery, which is both a home haunt and nonprofit foundation. When he was young, his parents loved Halloween and passed their passion on to their children. Troy’s father, an electrician, was the haunter, making a small haunt in their garage every year with masks and a few scarecrows. One year, the garage successfully scared the pants off of Yu’s childhood bully, who went home crying. He didn’t cause any trouble after that night.

Yu became a high school volunteer in the Haunted Forest, a Halloween attraction in his Michigan hometown that raised money for various after-school clubs. Each club could design their own small haunt zone that was overseen by the director, to ensure themes remained family-friendly. After graduation, Yu taught himself carpentry, set design, and engineering, and he took over the haunt for a few years after he graduated. He fondly remembers helping kids build sets and make their creepy creations a reality.

Bolton, the creative director and designer, also learned to love Halloween as a child. His parents tasked him with decorating the family home, which he sprayed with Silly String to imitate spiderwebs. Years later, he began to dream of becoming a theme park designer, and met Troy when he needed help building a convention booth years ago. (When they’re not building haunts, Yu works as a photographer and Bolton works as a freelance designer; they’ve spent over $20,000 of their own money on the haunt since they began working together.)

Yu first dreamed up the storyline for the haunt on a flight home from London. He and his husband had visited Highgate Cemetery, a gorgeous Gothic cemetery where 170,000 people have been buried since 1839. Gothic Hills Cemetery opened in 2016 and saw 660 people in just six hours, across two evenings. (Yu and Bolton would rather round up to 666.) They’ve fought to keep the tradition going: Yu was forced to move one year, and had to sell or discard most of his haunt; last year, the Camp Fire threatened Troy’s neighborhood. He recalls seeing his walls glowing with the orange haze of the nearby wildfire.

Over time, the team has gotten to know like-minded home haunters across Southern California. At monthly meetups like CalHauntS, which has over 400 member and about 30 regular participants, they share work, find inspiration, and talk technique. Another source of support is Rick West, the creative director and co-founder of Midsummer Scream, an annual summertime horror convention that thousands attend in Long Beach, California. West was so impressed with Gothic Hills Cemetery that he asked Yu and Bolton if they would exhibit at the convention. They were nervous: They were still rebuilding what they had lost during Yu’s move, and had never done something of this scale before. But they pulled it off in only two days. Inside the convention hall stood the Fitzroy mausoleum, the facade of the home haunt turned into a convention attraction. It was flanked by cemetery imagery and an illuminated full moon, and it drew over 1,300 people over two days.

Creating a home haunt is not a simple task, and Yu’s best advice is to partner up with like-minded people. A majority of the Gothic Hills haunt relies on woodworking and “haunter’s gold,” which is what Yu calls foam. It’s the raw material for many of their props and intricate features, such as concrete bricks, urns, and tombstones. He and Bolton use canvas, paint, and texturing liquid to create realistic textures. Many of their pieces are made by hand, including a stunning urn that was gifted to Gothic Hills Cemetery by local artist, Kara Walker.

Yu and Bolton rely on the help of about 10 volunteers during construction and on show nights. Many are locals with an interest in set design and production, and they pick up techniques they could then use to conjure their own creepiness. The haunt itself is a free attraction, funded in part by donations from visitors, a local nursery that loans plants out to create a spooky forest vibe, and other Halloween lovers who are looking to rehome their decor. They also work with EcoSet, a women-owned business that recycles theater, movie, and television sets. Gothic Hills Cemetery even has a few pieces from the set of the HBO series Veep.

For the time being, the goal is to keep the haunt out of the unforgiving clutches of the wind, and hope Pixel and Jax tolerate the growing crowds. (Visitors can find opening hours, along with updates on the wind, on their social media pages.) The duo has big dreams for the future, like more conventions, a larger haunt with more scares, and eventually a professional haunt, one that’s indoors and large enough for massive crowds. Yu says he’ll be “launching a dead body side business” next year, making hyper-realistic corpse props for haunt and film sets. He’s already an expert in how haunted houses can rise again.

Why Ireland's Pub Owners Have Long Moonlighted as Undertakers

Depending on the ghosts, it might fetch a premium.
black magic

A guide to traveling with "the wickedest man in the world."
haunted

The Scientist Whose Lab Is a Haunted House