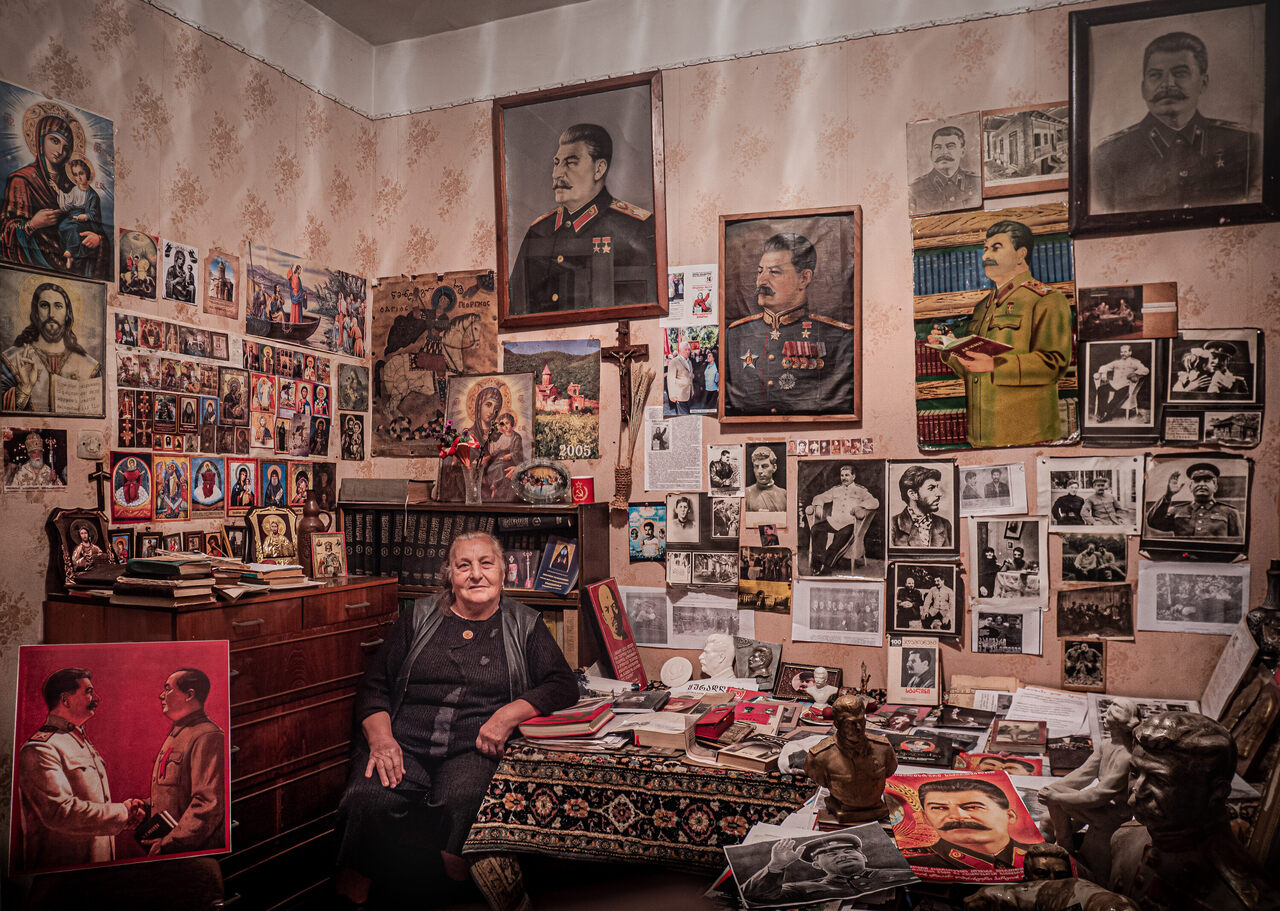 Nazi Stepanishvili sits in the corner of her home museum, where she displays Stalin memorabilia from across the globe. All photos by Nina Vaxanski
In This Story
Place

A museum glorifying the life of Stalin, located in the city of his birth.

In the corner of her house museum in Gori, Georgia, 77-year-old Nazi Stepanishvili sits at a meeting point of the religious and the revolutionary. To her right are images of the Georgian saints, crowned with golden haloes. To her left are portraits of Joseph Stalin, the Georgian-born autocrat who presided over the Soviet Union from 1922 to 1953. Where they meet above her head, an image of a young Stalin, dressed in white and depicted as an Orthodox saint, stares out.

“I’m a believer and a communist,” explains Stepanishvili. These images are part of a collection of Stalin memorabilia she has collected from around the globe over the past 30 years. “If I have money, I always invest in Stalin’s items,” she says. “I may not buy medicines or bread, but I’m going to buy Stalin’s things. I feel like the richest person because I have what I love. This is my wealth.”

More than 60 years after Stalin’s death, he is still venerated by many in Georgia, formerly known as the Georgian Soviet Socialist Republic. Here in his hometown of Gori, four statues of the “man of steel” stand in public venues, his name graces the main avenue, and a centrally located museum—better described as a shrine—uncritically celebrates his legacy. The museum uses a collection of relics to depict him as a secular saint, and a small, easily overlooked corner is the only testament to the crimes he committed. The place is visited by hordes of tourists every year.

Gori is a battleground for dueling interpretations of history. In 2010, under cover of night, the pro-Western government of Georgia removed the largest Stalin statue in the city, sparking local backlash. The following year, the Georgian legislature passed a “Liberty Charter” banning the public display of totalitarian symbols. Recently, however, Stalin effigies have returned to Georgian villages, such as Zemo Alvani and Telavi. In Gori, local citizens supported by the Communist Party have repeatedly tried to reinstall the large Stalin statue in the city center, and have even funded the construction of a new pedestal. In this small country caught between a Soviet past and a potential future in the European Union, Stalin has become a kind of Rorschach test, a canvas onto which different generations project their diagnoses of the country’s ailments and prescriptions for its success.

Stalin is remembered by some older citizens as a local son, a powerful modernizer, and a crusader against fascism. “He’s our boy,” explains Mayor Konstantine Tavzarashvili, a lifelong Gori resident. To Georgians like him, Stalin lived the ultimate underdog story, rising from small-country origins to take control of a superpower. He is also respected as a leader who industrialized the region. “Stalin inherited a nearly medieval country and left it with nuclear weapons,” Tavarashvili says. Perhaps most importantly, says Stepanishvili, “Stalin kicked Hitler’s ass.” (Stalin’s forces decisively repulsed the Nazi invasion of the USSR and went on to invade Germany; approximately 26 million Soviets died in the process.) Each year on May 9, residents celebrate Victory Day by parading through the streets displaying communist and Stalinist symbols. Stepanishvili participates in the festivities and also celebrates Stalin’s birthday in December, when she traditionally kneels and drinks a toast to his portrait in her museum.

This image of Stalin is worlds away from the violence and tyranny he represents to many young Georgians. Nostalgia for the Soviet leader “has something to do with the pride that the big guy was born here—no matter whether the big guy was good or bad,” explains Elene Khoshtaria, a member of the Parliament of Georgia. Khoshtaria’s grandfather and his brother were both executed during the Great Purge of 1937–38, and other members of his family were shipped off to Siberia.

“Stalin was a dictator and should not be a role model for me or for anyone else,” says Janna Odiashvili, a tour guide who shows visitors the “other side of Gori.” She is quick to point out that Stalin’s regime executed and exiled thousands of Georgians, particularly the country’s cultural and political intelligentsia. Teona Panqvelashvili, an activist who fought against a 2015 campaign to return the Stalin statue to the city center, also condemns Stalin’s involvement in the creation of the autonomous regions of Abkhazia and South Ossetia. After Georgia gained independence from the USSR in 1991, these territories seceded from Georgia with Russian backing, sparking bloody ethnic conflicts and a new Russian occupation of the separatist regions.

Anti-Stalinists see the man as a symbol of ongoing Russian aggression against Georgia. “We are often asked, why are you fighting against Stalin? He’s a dead man,” says Panqvelashvili. “But we are not fighting against Stalin—we are fighting against Russian propaganda.” Khoshtaria, the MP, argues that Russia “wants all its neighbors to be under its influence,” and calls the Russian Federation “the biggest obstacle to Georgian statehood.” They see the deification of Stalin as part of a Russian campaign to influence Georgia.

Gori has been on the front lines of this conflict since at least 2008, when Russian forces bombed and then briefly occupied the city. Now, the surrounding areas house settlements of refugees evicted at gunpoint from their homes in neighboring South Ossetia. “In this city bombed in 2008 by the Russians, we should not have a main avenue named after Stalin,” says Panqvelashvili. She supports a campaign to rename Stalin Avenue for Maro Mamukashvili, a nurse who was killed when the Red Army invaded Georgia in 1921.

The older generation’s nostalgia for the Soviet Union seems to stem from a dissatisfaction with the present, and the memory of policies such as guaranteed employment and housing, along with relatively low prices. “I don’t like this government,” says Stepanishvili. “I don’t like the prices. It’s so expensive. I don’t like the injustice. We had a happy childhood.” Eighty-two-year-old Valeri Sukhishvili, the founder of a local university, also believes the past was more egalitarian. “Now everyone comes from their personal interests and neglects the common values,” Sukhushvili says, as he sits among bottles of Georgian wine and liquor emblazoned with Stalin’s visage. “I’m heartbroken that we achieved the independence that we were dreaming about for so long, and that we have not been able to build a country.”

The aging members of the Communist Party of Georgia meet every Saturday in a dingy side room near Stalin Avenue, watched over by a portrait of the man himself. They still hope to see his statue return to downtown Gori. “There are statues of Reagan, there are statues of [former Azerbaijani dictator Heydar] Aliyev. Why can we not have statues of Stalin? What did he do wrong?” Stepanishvili says.

On the other side of town, in brightly-lit campaign headquarters, young representatives of a pro-Western opposition party, the United National Movement, want the statue to remain lying face down in the weeds of the government facility, where it currently resides. That way, “people can go and see what history does to dictators,” says party official Ani Baliashvili. She also argues that his remaining statues should be removed from public spaces, and that the museum celebrating Stalin should instead commemorate his victims. Right now, there are no concrete plans to do either. When coronavirus restrictions are lifted and the borders reopen, Stalin’s museum will likely fill with tourists all over again.

Join us for a daily celebration of the world’s most wondrous, unexpected, even strange places.
cold war

The Hidden History of the First Black Women to Serve in the U.S. Navy

The Golden Fourteen were largely forgotten—but a few veterans and descendants could change that.
war history

A new exhibit traces the experiences of seven narrators before, during, and after World War II.
Video