In 50 Years, Frankincense Could Be Snuffed Out - Atlas Obscura 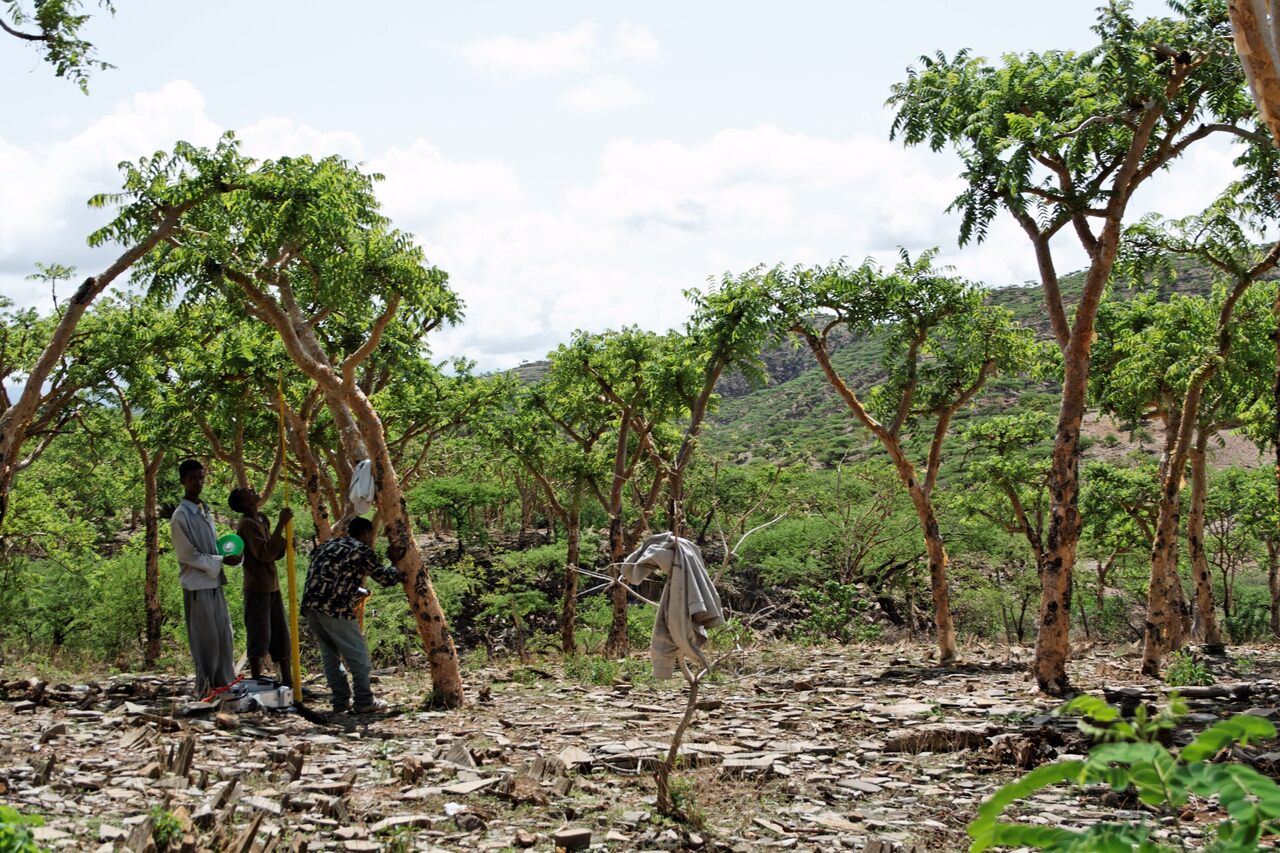 In parts of Africa and India, wild Boswellia sacra trees produce frankincense, an ancient, aromatic resin extracted from the sap of their trunks. Known for its biblical significance—frankincense was one of the three gifts of the Magi (along with myrrh and gold)—the fragrant material is used in perfumes and incense, for cooking and religious ceremonies.

For millennia, frankincense foragers have stripped the papery bark of Boswellia trees several times each year to get tears of the hardened resin to appear. Now, the population of trees responsible for this sweet, woody scent are steadily declining as a result of exploitative tapping practices. Two other factors—agricultural clearing in the woodlands where these deciduous trees thrive, and disturbances by longhorn beetles (which lay their eggs within the bark)—are compounding the problem.

A new study by Dutch and Ethiopian ecologists, recently published in the journal Nature Sustainability, asserts that over the next 20 years, frankincense production worldwide could be cut in half. The researchers predict that 90 percent of the world’s Boswellia trees will disappear by 2070.

“Current management of Boswellia populations is clearly unsustainable,” lead researcher Frans Bongers of Wageningen University in the Netherlands, said in a statement. “Our models show that within 50 years, populations of Boswellia will be decimated, and the declining populations mean frankincense production is doomed.”

The team of scientists studied an area in northwest Ethiopia, which kisses the Blue Nile and contains a smattering of both tapped and untapped Boswellia trees. In their study, they detailed their method for predicting the lifespan of viable frankincense resin in the coming decades. After analyzing the growth-ring data of more than 20,000 trees, the ecologists found that over 75 percent of the populations they studied lacked small (read: young and untapped) trees, and that these specimens have not regenerated naturally for decades.

Measuring growth and seed production revealed that those trees consistently tapped for their fragrant resin “produce seeds that germinate at only 16 percent while seeds of trees that had not been tapped germinate at more than 80 percent,” according to Environmental News Network.

Moving forward, ecologists suggest that these trees and the gummy, amber-colored sap they generate can be protected by regulating how often they’re tapped, and by better land management generally. It takes Boswellia saplings up to 10 years to mature, so preventing insects, wildfires—and humans—from impeding their growth is paramount.

Found: The Only Wild Koala Population in Australia That Is STI-Free

Chlamydia is a threat to the marsupials, so an island without it is a good sign.
smellsecologytreesnaturescience

Help us keep them coming by directly supporting Atlas Obscura.
Become a Member
$5/month $10/month $20/month
See All Membership Options
Already a part of our membership program? Sign in.
No Thanks
Keep Exploring
science

The South Carolina Forest That Looks Like Melted Ice Cream

When conditions are right, the waters of Congaree National Park can look like bright scoops pooling on a sidewalk.
science

Gaze out the window or at your computer, in the name of data.
science

Keep an eye out for the giant sea bass's spots.
science

Scientists Are Simulating Mass Animal Die-Offs in an Oklahoma Prairie

The West Is Being Won by Tiny Bits of Plastic

Natural landscapes are seeing huge amounts of microplastics tumbling from the sky.
Read more
Thanks for sharing!