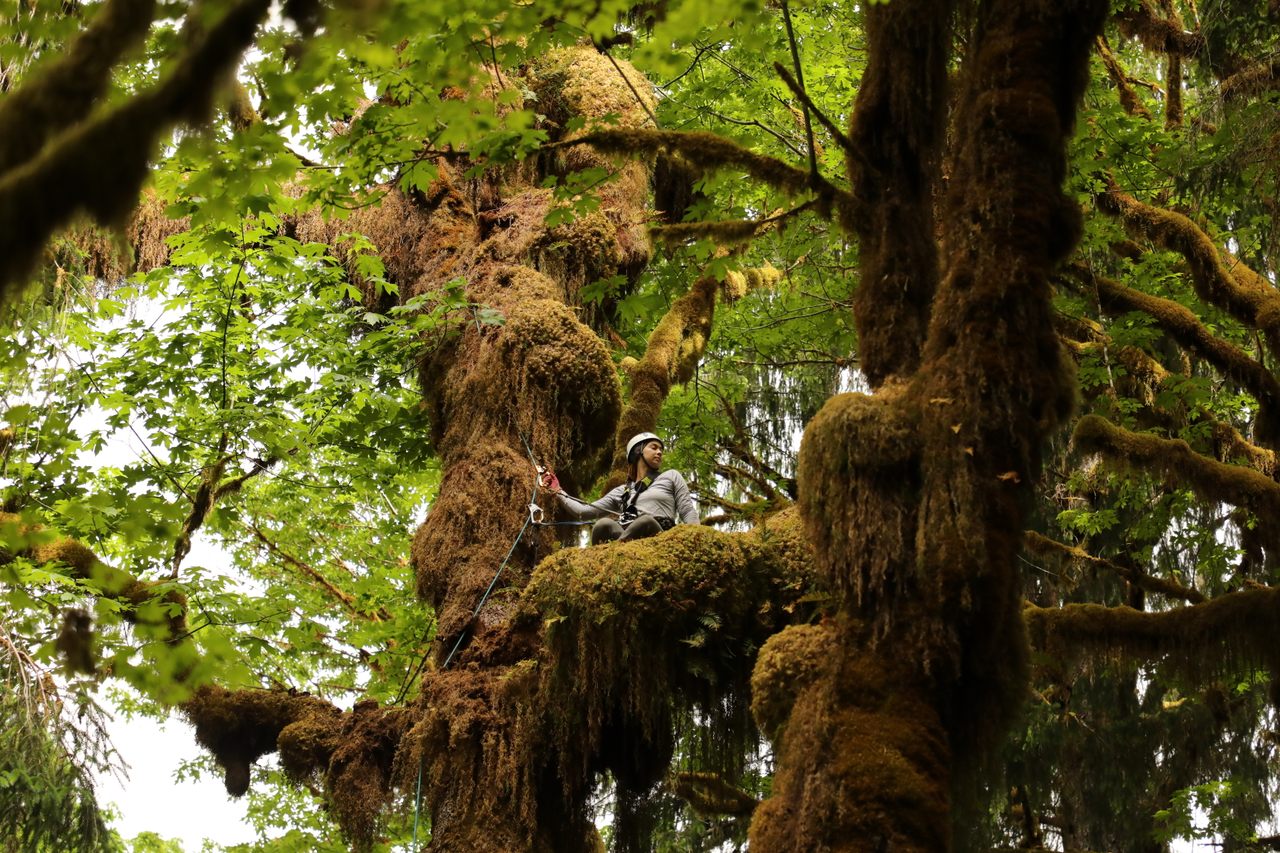 “There are so many good things in there that we can explore,” says soil ecologist Korena Mafune, pictured here high in the canopy of the Hoh Rain Forest. Courtesy Scott Mafune
In This Story
Place

Stroll through a wonderland of stupendous moss-covered trees.
Sponsored by Lincoln
Destination Guide

The Hall of Mosses, a looped hiking trail in Washington State’s Hoh Rain Forest, is known for a kind of otherworldly lusciousness. Vibrant ferns line misty paths. The roots of centuries-old trees tangle around each other, forming miniature mazes. Most spectacularly, soft moss coats the towering Sitka spruce trees, drooping in fringed curtains from the branches. It’s awe-inspiring, but there’s more wonder in store. “When you look up, you see that beautiful green drapery,” says Korena Mafune, a soil ecologist based at the University of Washington in Seattle, “but the real secrets are what it holds underneath it.”

It’s impossible to tell from the ground, but on the branches, beneath the trailing moss, is a whole lot of dirt. This “engulfing mat of organic matter,” as Mafune calls it, is a soil formed from fallen leaves, airborne particulates, and moisture that accumulate in the nooks and crannies well off the forest floor. Built up over decades or centuries, this canopy soil provides a home for insects, fungi, birds, worms, and epiphytes, which are plants that grow on other plants—and much of this life never touches the ground. It’s an aerial ecosystem, a network of life that’s only possible in old-growth forests.

The study of the canopy layer—the network of leaves and branches above the forest floor—is a relatively new science. Before the 1980s, scientists were largely focused on the forest floor. “I wish I’d interviewed an old forester in the year 1900 to say, ‘How come you’ve never thought about the whole tree?’” says “arbonaut” Margaret Lowman. “But it just never seemed to be part of the formula.”

Lowman, who also goes by the moniker Canopy Meg, was one of the first scientists to start scaling trees to examine the canopy. In 1979 she borrowed an industrial sewing machine to create her first “slingshot”—a tool that launches a weighted line up and over a sturdy branch so climbers can hoist themselves up to conduct research. “We’ve just opened the treasure chest,” of the ecosystems 50, 60, 70, 100 feet off the ground, says Mafune. “There are so many good things in there that we can explore.”

From unusual mineral concentrations to microscopic extremophiles, canopy soil contains a wealth of potential research subjects. Mafune is particularly interested in mycorrhizal fungi, which help plants take in nutrients from the soil. “They’re very cryptic, they’re very mysterious,” she says. Mafune found that dense canopy soil has much more phosphorus and nitrogen than the soil on the ground, leading her to wonder whether canopy soil might help the host trees themselves to survive the harsher conditions that accompany climate change.

Lowman, who focuses on leaves and the creatures who live on them, has recently been studying tardigrades, which are borderline microscopic animals with eight legs and a tubular mouth. They’re capable of surviving in extreme environments ranging from -300 to around 300 degrees Fahrenheit, but are usually found on mosses or lichens. Tardigrades live in abundance in canopy soils, but it’s unclear why or how they get there in such quantities. Their lumbering, bear-like walk, which accounts for their nickname—“water bear”—wouldn’t carry them up a tall tree. Studies have shown that they likely arrive on the wind or inadvertently hitch a ride on a canopy-bound animal. Scientists such as Lowman are still investigating tardigrade distribution and what the patterns might say about their requirements for survival.

The sheer volume of species living in the canopy is tantalizing for researchers. “There was a study that showed there were over 50 species of epiphytes in a single redwood,” says Lowman. “We know that there are thousands of microorganisms.” Both Mafune and Lowman mention the possibility of undiscovered species among the leaves.

Canopies and their inhabitants could also offer benefits for human health. At these heights, says Lowman, “animals are eating each other and leaves are developing chemicals to defend themselves,” creating “a whole apothecary up there that we’ve hardly ever inventoried.” Trees have yielded life-saving medicines before. Taxol, a drug used to treat breast, lung, and ovarian cancer, comes from the bark of Taxus brevifolia, a yew tree that’s native to the Pacific Northwest.The Quechua, the Indigenous people of Peru, have long used extract from the ground bark of cinchona trees as a muscle relaxant. The extract, quinine, was the world’s antimalarial drug of choice in the 1820s and into the 21st century.

There are obstacles to more comprehensive study of old-growth canopies. For one, they’re hard to get to, and are fragile and easily disturbed. Perhaps more importantly, the ancient forests are under threat in the Pacific Northwest and British Columbia, from the effects of both climate change and logging. When loggers harvest an old-growth forest for its timber, the complex networks, micro-ecosystems, and habitats built up in the canopy over centuries vanish with a crash—and reforestation doesn’t simply bring it all back. Newly planted forests also don’t have big, decomposing logs lying around that, says Mafune, each of which “basically support[s] their own mini forest.” When it comes to forest biodiversity, older is better.

Magical scanner or not, protecting old-growth forest for the future is critical. The canopy is, Lowman says, “a huge unexplored terrain for the next generation of scientists.”

With a little help from scientists, an oak in the Harvard Forest is sharing updates about its life.
forests

The Ancient, Sunken Forest That Rises From a Welsh Beach

When it does, researchers rush in to study the age-old stumps.
forests

Where Are Europe's Last Fairytale Forests?

Mapping the oldest and least-disturbed tracts of trees is easier said than done.
Video