These Ants in Panama Are Masters of Damage Control - Atlas Obscura
Want to see fewer ads? Become a Member. 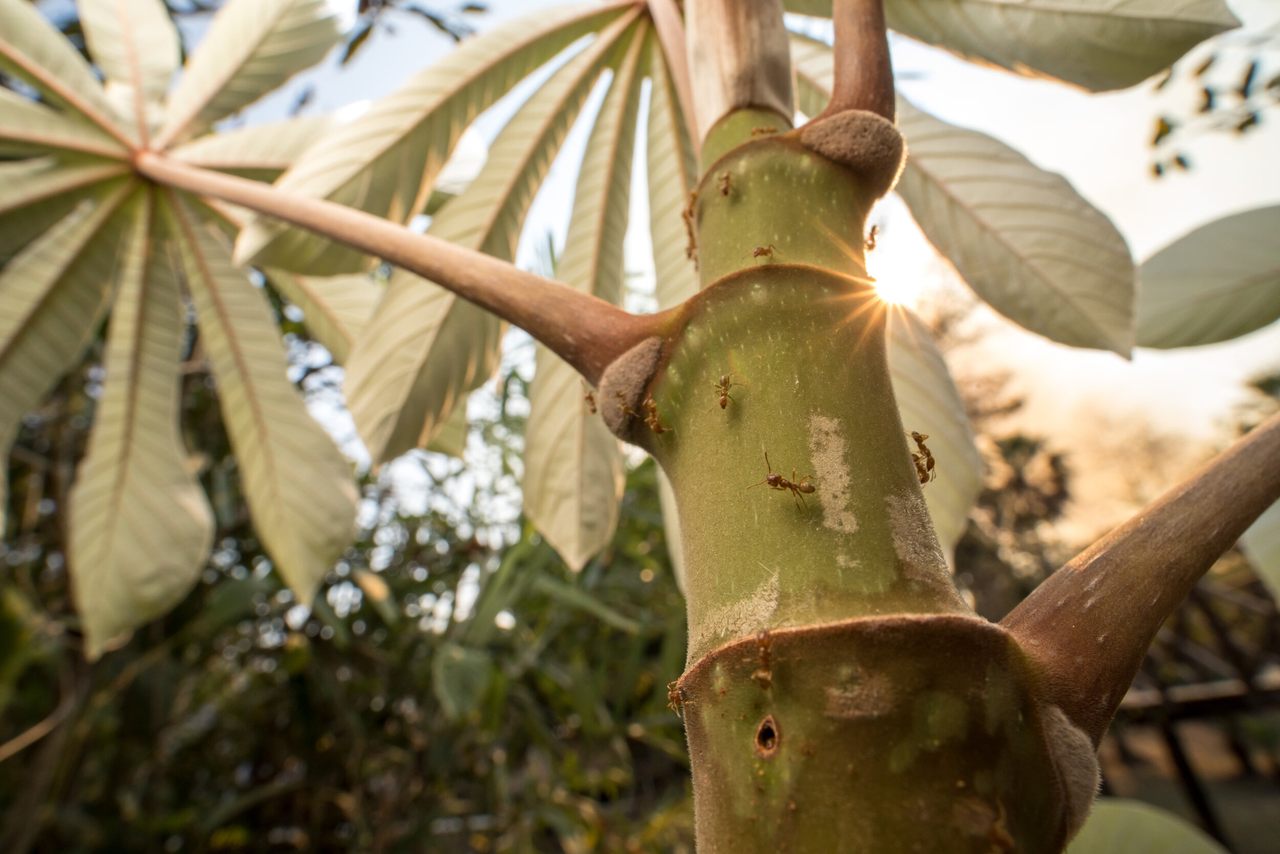 While many people in Panama were at home, passing time during the pandemic, five kids were out shooting a clay ball at trees with a slingshot. They wanted to give themselves a challenge, so they were targeting slender cecropia trees in particular. One of the kids was aiming for its broad, flat leaves, but hit the stem instead, leaving a clean, gaping hole, from one side to the other.

William Wcislo, an entomologist at the Smithsonian Tropical Research Institute and father of two of the kids, had been tending to this tree, and was worried that it had suffered irreparable damage. But when he returned later, he was in for a surprise. The holes had been patched up.

Closer inspection revealed who was responsible: Azteca alfari, small, sand-colored ants known to build nests inside cecropia trees, which are widespread in Central and South America. Wcislo saw how they swarmed to the site of injury, gathered small, fibrous plant pieces from inside the stem, combined it with a sap-like substance, and quickly started closing up the hole.

Scientists already knew that Azteca ants live in a close symbiotic relationship with cecropia: The trees have hollow stems in which the insects build complex, multistory homes. In return, the ants fend off caterpillars, birds, and other herbivores that like to snack on fruits, leaves, and flowers. But what Wsiclo and the kids observed, which was eventually replicated and published in a recent study in the Journal of Hymenoptera Research, was the first time the ants were seen actually repairing damage to their home.

“I think it’s very exciting to know that there’s this potential new dimension to that beneficial relationship,” says Jane Lucas, an assistant scientist at the Cary Institute of Ecosystem Studies in Millbrook, New York, who was not involved in the study. Knowing this, she says, does not mean that the behavior is necessarily mutually beneficial—after all, the ants could be doing this purely to protect themselves and their colony—but it does suggest that the interaction between the ants and the trees may be more complex than previously imagined.

To determine whether this behavior extended beyond the first, unfortunate target tree, the team decided to carry out an experiment on 22 small cecropias growing near the edge of the Bosque Urbano de Cárdenas, a tropical forest in Panama. Their method was simple: They drilled holes into the trees and waited.

Wsiclo and his team found that in around half of the trees Azteca ants raced to the wound site and began stitching up the holes. Within a couple hours, the holes had noticeably shrunk. After 24 hours, the diameter of the holes was nearly half of what it had originally been. And that was just on average. In four of the trees, the holes were patched up completely

“The speed at which the ants are closing these holes is pretty amazing,” says Lucas.

When holes were drilled near or inside the nest within the stem, the ants sprang into action, first evacuating their broods to nearby chambers. Then they generally worked in groups of around 10, from both the inside and the outside, using fibrous plant pieces and that gooey substance.

It seems clear that patching up the holes helps the ants. Their immature, vulnerable broods would be at risk of predation or disease if they were exposed. But it is less clear whether the tree benefits at all, says Lucas, since cecropia naturally heal their own wounds over time anyway.

“[The ants] probably don’t care that their host tree is hurt. They care that their nest is disrupted,” says Lucas. Indeed as Wsiclo’s team wrote in the paper, “ant repair behavior may be unlikely to benefit the plant directly.

But Lucas thinks there could be more to it than that, at least in theory. The ants might be adding anti-microbial agents when they patch up the holes. This, along with the speed at which the repairs take place, could actually mean positive things for the plants as well, she says. “The [speed] definitely could help a plant by not having pathogens enter into it, because it’s happening so quickly.”

The observation is fascinating, but Eugene Schupp, a professor of plant ecology at Utah State University, who was not involved in the study, isn’t entirely surprised. Azteca amalfi are great architects: Their nests are made in a similar way, with wood material glued together with secretions from their mouthparts. In fact, when these ants first begin constructing their nests, they carve out holes in the tree, only to patch them up again. “So they certainly should have the ability to work with construction materials to repair damage,” he says.

But there are some important questions, says Lucas. Why were around half of the trees not patched up? Wsiclo and his team could only speculate on this, but it could be due to the health, size, or even “personality” of a colony. Some colonies, says Schupp, are large, dynamic, and respond to a mere tap on the trunk. Others are small, sluggish, and totally unresponsive. “These [differences] could easily explain why there are large differences in repair from colony to colony, with some sealing the wound rapidly and others not at all,” he says.

Another question is about how far-reaching the behavior might be, says Lucas. The study focused on small, relatively young cecropia trees in a specific region of Panama. “I think it’s really important that you can show that it’s actually a species-level trait and not just like, weirdly, this one forest in Panama,” she says. Of course, that kind of local adaptation would be interesting, too.

Wsiclo’s team plans to dig further into this intimate natural interaction. In particular, they want to test whether the ants really are secreting anti-microbial chemicals that further protect the tree—yet another amazing example of how complex and multilayered ecosystems can be, says Lucas.

“It would be this kind of crazy interplay, where it’s like, there are microbes inside the ant that are helping the plant,” she says, “like a three-way link of organisms, which would be really exciting to see.”

A remote wedge of wilderness is home to trailblazing elephants, epic trees, and the only chimps and gorillas known to share a meal.
forests

The ancient resin, used for everything from aromatherapy to Catholic ceremonies, is being overtapped.
Video