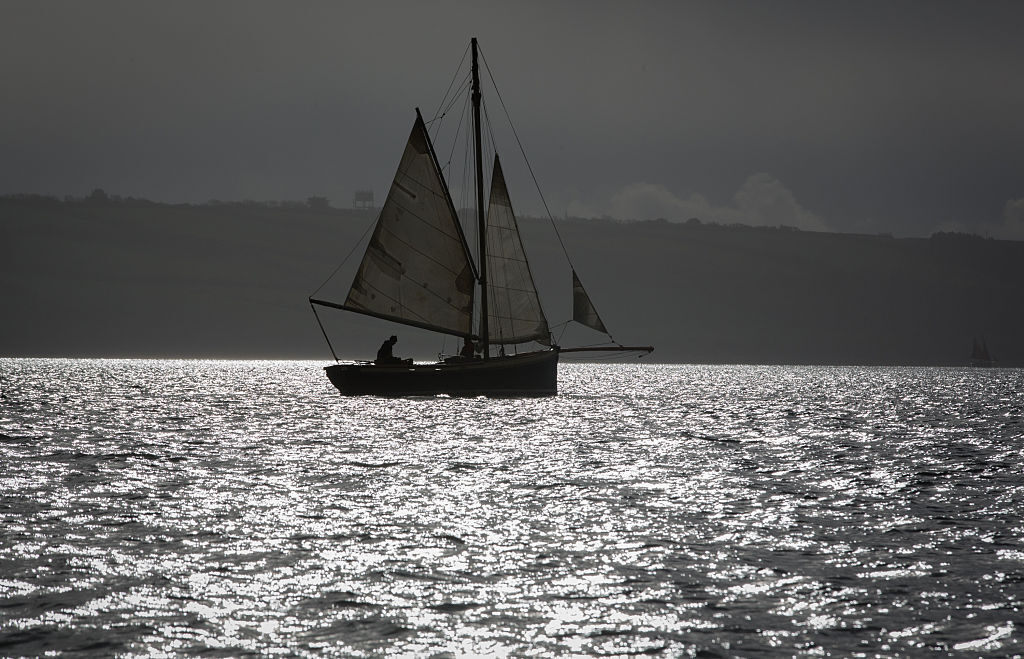 Some of the boats are well over a century old. Matt Cardy/Getty Images
In This Story
Destination Guide

Looking out on a clear, breezy day, and you’ll see them: white sails bellying against blue skies, wooden hulls cutting through choppy waters. Every year, between October and March, elegant sailboats ply the waters of the Fal estuary in Cornwall, on the United Kingdom’s southwest coast. But these boats aren’t out on the waves for pleasure. They’re harvesting oysters.

Ever since 1876, mechanical dredging on the Fal has been banned. Dredging, which involves towing a metal cage along the estuary bed to harvest the shellfish which grow there, must be done under the power of ‘sail or oar’; no motors may be used. The persistence of this rule has meant that the Fal oyster fleet is the last in Europe to fish solely under sail. Its inefficiency has effectively preserved the wild beds of the distinctively thin, flat European oyster, or ostrea edulis, known in the UK as “natives,” says Colin Trundle, principal scientific officer at Cornwall’s Inshore Fisheries & Conservation Authority, which regulates the Fal estuary. While natives are generally prized for their sweetness, the ones from the Fal are particularly renowned for their minerality, which lends them a distinctive flavor prized by shellfish lovers.

Two types of vessels dredge for oysters. The larger, gaff-rigged boats can use a motor to get out to the oyster beds, but must work under wind power once the dredge is down. Row boats—or punts, as they’re called locally—are able to access the shallower waters and smaller inlets. “It basically works by putting out an anchor and a hand-hauling winch,” explains Tim Vinnicombe, a fifth-generation oysterman who works a 150-year-old boat that he converted to an oyster dredger in the 1970s. Once anchor is dropped, oystermen drift the boat off to a distance before they put the dredge in the water and haul in the rope. The dredge, which is towed along behind the punt, fills up with shellfish. “It’s very basic, all done by hand,” Vinnicombe says. “It’s all hard work.”

Vinnicombe speaks with a thick Cornish accent, and occasional anachronisms lend his utterances a timelessness. At 64, he has seen plenty of change to the fishery. He sees the relationship between the fishermen and the oysters as symbiotic. Changes to the beds alter the fishermen’s fortunes, and vice-versa.

“The oyster fishery, in my experience, tends to go up and down,” he says. “You’ll have a good season and they’ll be quite prevalent.” But when oyster stocks fall below a certain point, fishermen start leaving to take on other jobs that make more money. “The die-hards will stay there, then suddenly the oysters will come back up again and people start going back to the fishery.”

But now, changes are underway which threaten the oysters and those who make their living off them. A century ago, 200 boats dredged the Fal. Today, only around 15 remain. The reasons are both gastronomic and ecological. Natives have fallen out of favor with diners, who now prefer the chubbier Pacific oyster, and Cornish waters are warming. On top of that, other species that eat natives are also becoming more common. “There’s a lot of gilthead bream here now in the estuaries,” says Jason Pascoe, another Fal oyster fisherman. “We never used to have them years ago, they’re just something that’s turned up. And they’re renowned for eating small oysters, small shellfish, and all that.”

Dredging for queen scallops (locally known as “queenies”) has proved lucrative for some fishermen and kept many others financially afloat, but as filter feeders, they too eat oyster larvae. Other factors stacked against the oysters include pollution and increasing numbers of pleasure boats on the estuary, whose hulls are treated with chemicals. Whether the oyster beds will renew naturally or need human assistance to avoid a permanent decline is a subject of bitter debate amongst the oystermen. Though numbers rebounded after a parasite almost completely wiped out stocks in the early 1980s, some argue the challenges faced today are even more grave, and that the fishery should close completely to allow stocks to replenish. Arguments are heated and tempers run high—no surprise, given that livelihoods are at stake.

For his part, Pascoe is all for giving the oysters a helping hand. During the summer months, the Fal fishery closes to let the oysters spawn. While the oystermen take up summer jobs (which may include hand-line fishing and trawling, or a trade like plastering or boat-building) the fertilized oyster larvae drift with the water column. Once they attach to a hard surface—usually other oyster shells—they become known as spat. These immature oysters then begin to grow.

But the survival rate for larvae is low. Just one in every half a million will survive in the wild, says Pascoe. Together with Chris Ranger, another oysterman, he decided to start a hatchery on the banks of the Fal. The idea is to protect larvae from predators and provide a good density of oyster shells for the spat. “In a hatchery, we should be able to bring it up to a 30 to 40 percent survival rate,” predicts Ranger, who is now in sole charge of the project and hopes to repopulate the fishery with natives.

The Fal hatchery began crowdfunding early this year and, despite the upheaval caused by the spread of COVID-19, reached its goal at Easter. But the UK-wide lockdown ushered in a period of radical uncertainty for fishermen all over the country.

With the closure of merchants, markets, and restaurants at home and abroad, the Fal’s fishermen saw their fortunes plummet. While the UK government has offered financial support packages, not all fishermen are eligible, nor does the money always cover overheads such as boat insurance, harbor charges, and equipment rental. Waiting for the funding to come through is a test of endurance. Fal fishermen who dredge in the winter and turn to other jobs in the summer are resilient, familiar with turning with the tides. “But it’s difficult for anyone to survive without income,” says Pascoe.

Now, many fishermen have turned to selling directly to the public. “Hats off to the guys for doing it,” says Trundle. “It’s a lot of work to do the fishing side of it and then to do the marketing side of it yourself once you’ve come back to shore.” The day I speak to Pascoe, he’s had a grant approved to fund the purchase of a van and an ice machine. He sounds optimistic. “People locally have said ‘Yes, definitely we’ll buy your fish from you,’” he says. He sees the van as a way of securing his livelihood in the short term, and further ahead. Whatever the future of the fishery, the change provoked by the pandemic has wrought possibly permanent change. “I think it’s going to take a long time for things to go back to normal,” he says.

Tristan da Cunha was first inhabited to keep an eye on Napoleon; now residents are looking out for lobsters.
music

Three elderly women are teaching the music of these famed fisherwomen.
medieval

With only nine master fishermen left, a centuries-old tradition is at risk.
food

For the Quinault Indian Nation, restoring their fisheries is a multi-generation project.
Video

The largest greenhouse in the world is home to over one million types of plants.
Monon, Indiana

This restaurant preserves and serves lesser-known and regional Nepali food.
Want to see fewer ads? Become a Member.
From Around the Web
Travel With Atlas Obscura
Are you a curious traveler?
Join local experts in 50+ destinations for a once-in-a-lifetime journey.
View Our Trips
Thanks for sharing!