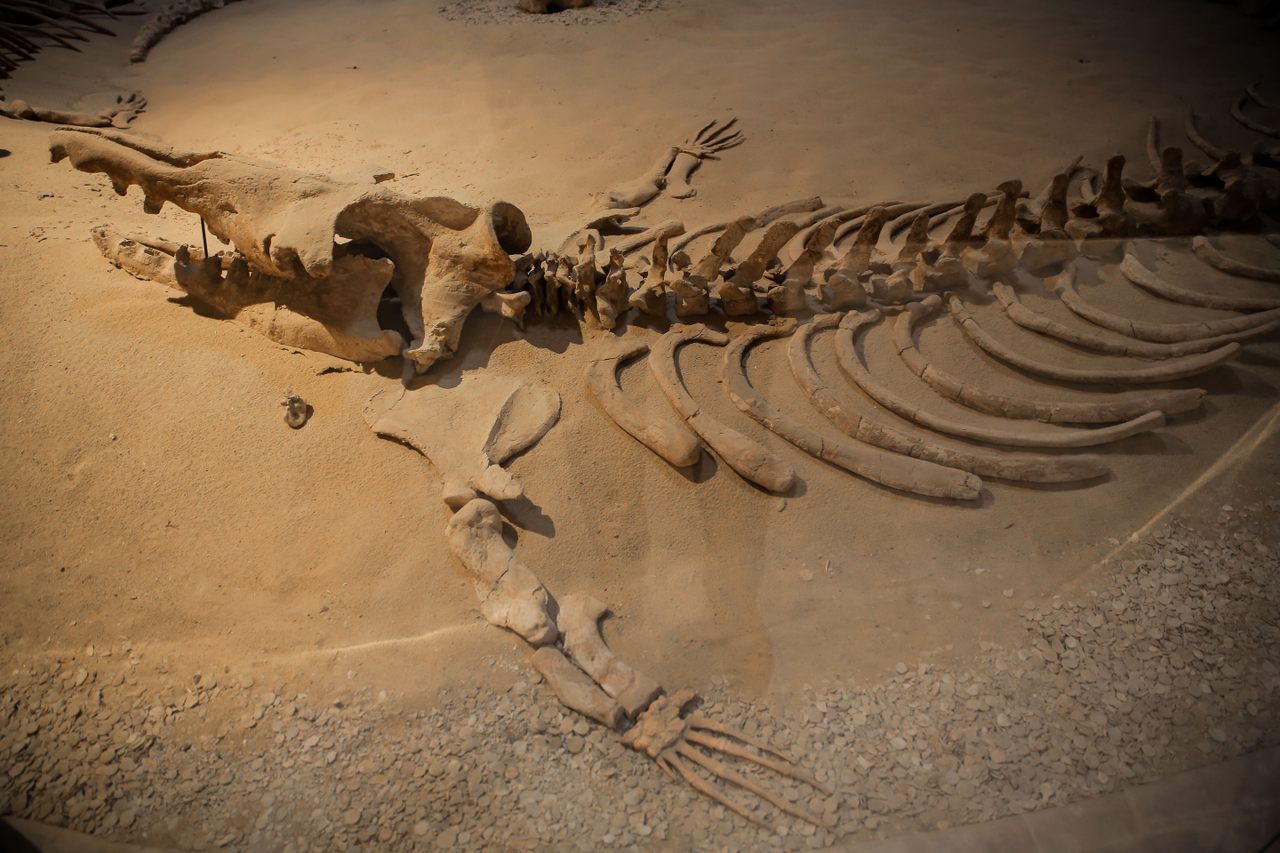 Egypt is home to fossils that include a range of ancient marine animals, such as this early whale from Wadi al-Hitan, southwest of Cairo. Ahmed Al Sayed/Anadolu Agency/Getty Images
In This Story
Place

Wadi al-Hitan (Valley of the Whales)

A few years ago, Abdullah Gohar’s mother introduced him to a ghost. That’s how she phrased it, and at first, Gohar was confused. “What are you talking about?” he recalls asking her. But he was also intrigued: She wasn’t alluding to seances and ectoplasm, but rather prehistoric bones, toes from an ancient elephant that had trundled through their neighborhood millions of years before.

Gohar grew up near Egypt’s Fayum Depression, a basin southwest of Cairo that’s studded with the remains of prehistoric life, and the fossils got him thinking. He had long been interested in whales (“I adore them,” he says, grinning), but as a university student pursuing marine biology, he focused mainly on the observable behavior of whales today, such as spouting, breaching, and migrating across the world’s oceans. The fossil his mother showed him invited him to cast his gaze back in time—and to find a portal, he didn’t have to look far. The Fayum Depression includes the site known as Wadi al-Hitan, or “Valley of the Whales,” a sprawling, incidental burial ground where ancestors of modern whales appear to swim through yellow earth. Gohar pivoted to paleontology, studying cetacean evolution and how whales “transformed from tiny, terrestrial mammals to [the] biggest mammals in the sea now.” He’s now a graduate student at Egypt’s Mansoura University and the lead author of a recent paper that describes a new species of ancient whale, one of the fossil “ghosts” helping him trace new details in the animals’ transition from land to ocean.

Whales had a long road to an aquatic life, and some of the stretches are hard to puzzle out. (The patchy fossil record is “awkward,” according to an Italian research team led by biologist Stefano Dominici.) Scientists do know that some of the earliest cetaceans—including Pakicetus, a four-legged landlubber that lived roughly 50 million years ago—probably looked a bit like canids. From there, it took whales millions of years to become full-time residents of the water, says paleontologist Hesham Sallam, founder of the Mansoura University Vertebrate Paleontology Center and one of Gohar’s coauthors. Along the way, there were “many transitional forms,” Sallam adds—species that lived amphibious lives, moving between water and land.

The newly described species, which Gohar and his collaborators dubbed Phiomicetus anubis, is one that likely split its time between sand and sea. Part of a group known as the protocetids, it lived during the middle Eocene Epoch—roughly 48 to 38 million years ago—when the present-day Fayum area was blanketed by a sea home to crabs, sharks, and relatives of sea urchins.

In the case of P. anubis, the fossil “ghosts” included a skull, mandible, ribs, and vertebrae. By the time Gohar encountered them, these fossils had already had a bit of an afterlife above ground: Mohammed Sameh Antar, a regional director for the Egyptian Environmental Affairs Agency, had stored them since 2008, when they were excavated from Fayum shale. “He kept [the fossils] for a new paleontological generation,” says Sallam.

Sallam has been at the forefront of that new generation for more than a decade. After earning his Ph.D. in vertebrate paleontology at the University of Oxford and working as a visiting scholar at Stony Brook University, Sallam returned to his homeland determined to give Egyptian scientists a leading role in the study of the country’s fossils, which, historically, have often been examined by foreigners. In 2017, he persuaded Antar to transfer the fossils to Mansoura University, where students in his program, including Gohar, could analyze them.

To confirm he was looking at a new species, Gohar compared his “ghost” to 45 previously known ancient whales and more distant relatives, based on nearly 200 often subtle anatomical traits. The work required meticulous attention to detail: He spent six months on the skull alone. Gohar concluded he was looking at something new—and that it happened to be the earliest known protocetid found in Africa. “It’s my big win,” he says, happily.

Even in a relatively small fossil assemblage, the researchers found some clues about the creature’s life. The jaws of P. anubis, and wear patterns on its teeth, hint that the predator could take down even formidable prey, such as armored fish. But without looking at limbs or a pelvis, it’s hard to draw conclusions about whether the whale was more marine or more terrestrial. “Limbs are very, very important in detecting locomotion style, swimming style, and evolution of forelimb to flippers,” Gohar says.

Next up, Gohar will get a closer look at the bones’ internal structure using CT scanning. He and Sallam will soon head out to Fayum with the hope of unearthing more fossils to help tell the whale’s story. That’s the dream, Gorhar says, “taking my backpack and walking in the desert,” collecting ghosts along the way.