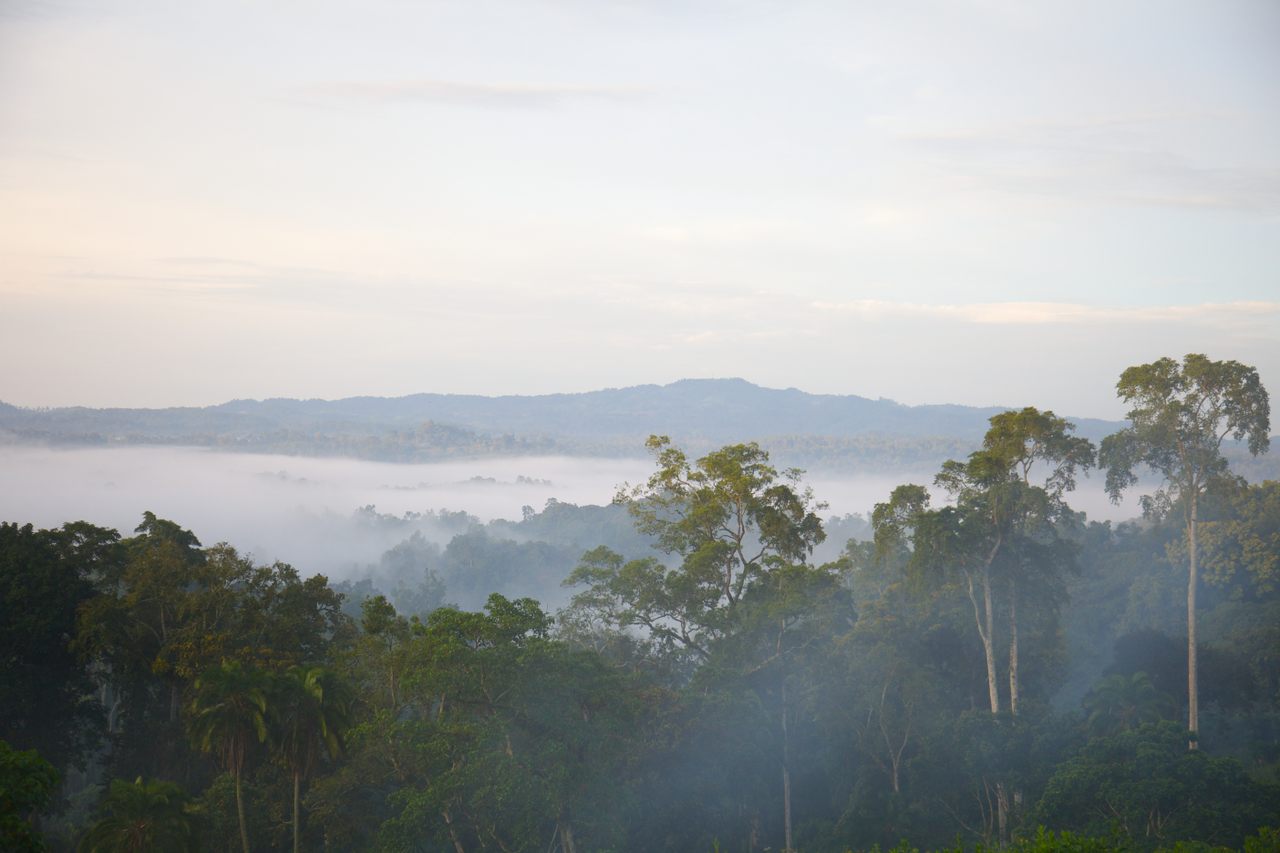 A view of a coffee forest in Ethiopia. Jeff Koehler
In This Story
Place

This article is adapted from the September 18, 2021, edition of Gastro Obscura’s Favorite Things newsletter. You can sign up here.

Coffee is everywhere. It’s in espressos and cappuccinos; it’s in pods and packets of Nescafé. It’s in small-town gas stations and big-city cafés. It’s on every continent. Some 90 percent of people on Earth start the day with caffeine, usually tea or coffee.

All that coffee can be traced back to one place: patches of forest in Ethiopia. These forests where coffee grows wild—gathered by humans, but also enjoyed by birds and baboons—are so small that if you circled them on a globe, they’d just be dots.

I should be more specific though. Not all coffee came from these forests—just Arabica, the coffee that is considered the good kind. Plenty of people enjoy the cheaper, easier-to-grow Robusta variety, but it’s Arabica that is sold in most coffee shops and at premium prices. And it grows wild nowhere else.

Growers now cultivate Arabica coffee in Latin America, the Middle East, India, and Southeast Asia. But the source of the coffee tree is no idle curiosity. The key to every new and improved kind of Arabica coffee lies in these forests. And as the world warms, they could disappear entirely within 60 years.

Where the Coffee Grows Wild

A Q&A with Jeff Koehler

In 2017, journalist and cookbook author Jeff Koehler published Where the Coffee Grows Wild. Given the world’s obsession with coffee, I expected its birthplace to be extensively documented. Instead, Koehler’s book is one of the only accounts of them.

Q: You have visited both coffee forests and coffee plantations. What feels different about them?

JK: Plantations are these beautiful, organized rows. In the forest, it’s just chaos. Arabica trees are skinny and tall, they’re trying to burst through to the light. They’re leaning in every direction and are scuffed up by baboons and covered in silvery moss.

In a coffee forest, that tree won its spot. It’s not there to make your coffee, it’s there to survive.

Q: Why are coffee forests only in Ethiopia? Is their limited range unusual for a crop?

JK: I think it’s highly unusual. There are some spices that are maybe only on a few islands. But coffee is on the unusual side of having a limited range. It’s very specific where it came from: a specific band of forest in Ethiopia and a bit in Sudan. That’s it.

The Arabica tree is very sensitive and doesn’t survive outside a limited range. So the fear is that with climate change, it could disappear. This important and valuable gene pool is shrinking and shrinking.

Q: Arabica trees have been planted all over the world. So why is it a problem if Ethiopia’s coffee forests disappear?

JK: There is an incredible lack of genetic diversity in coffee plantations. Essentially, they rely on a handful of cultivars with little genomic difference. Some experts think those Ethiopian forests possess 99.8 percent of the world’s genetic diversity for Arabica.

One important key to ensuring that the coffee crop can better survive pests, fungus, and climate changes resides in the genetic variations found in those forests. (Plus maybe that holy grail of naturally decaffeinated beans, or at least less-caffeinated.) The closer to the origin of coffee you are, the more genetic diversity can be found.

Q: So wild coffee—coffee that comes from beans gathered in a coffee forest—does it taste better?

JK: I would say no. The best coffee has a high level of quality control: It comes only from ruby red fruits. If the berry is not ripe, the bean won’t have the same flavor.

But in the forest, they take all the coffee fruits on the tree, including the underripe and overripe cherries. That’s because wild coffee does not ripen at the same time. The place where people forage may not be close to where they live, and if they return later, a monsoon might have knocked down the fruit, or baboons and birds might have eaten it. Animals love the ripe coffee fruit.

So the result is not as good. But as an experience? Being in the forest and having rich, thick wild coffee, that’s unbeatable.

Think Beyond the Bean

To Ethiopians, especially those who live near the coffee forests, coffee is not just a drink. It is a plant with multiple uses that incorporate everything from its leaves to the bright cherry that surrounds each bean. Here are four ways Ethiopians enjoy coffee that don’t involve grinding and roasting.

1) Coffee beans come from the plant’s cherries. What do you do with the cherries? One option is to dry them and then steep them in water. The result, known as cascara, is a tea-like beverage that’s low in caffeine with sweet, fruity flavors. Thanks to growing international interest, it’s relatively easy to buy from tea or coffee companies, or sites such as Amazon.

2) A similar option is to use the coffee plant’s leaves to make kuti, which is sometimes known abroad as coffee-leaf tea. Koehler compares its taste to pu’er. Kuti is also available to order online.

3) Ethiopians will sometimes just pop coffee cherries or beans in their mouth as a snack. A word of warning: You may enjoy this less with coffee beans you buy at the store than the smaller, wild ones enjoyed in Ethiopia.

4) Want to eat coffee with a spoon? Green coffee beans cooked in butter with spices is a common snack, as well as a wedding tradition in the Ethiopian city of Jimma. Looking for a recipe? You can find one in the award-winning cookbook Ethiopia: Recipes and Traditions from the Horn of Africa.

Last week, I ground a bag of beans shipped from Union Coffee in London. Sold with support from the Darwin Institute and Royal Botanical Gardens, Kew, the beans come from Yayu, one of Ethiopia’s last wild coffee forests.

I enjoyed my coffee—it was light and bright. But it did not taste distinctly different from typical, domesticated coffee. And that’s to be expected, I learned. Efforts by Union and the farmers to improve the coffee’s quality, such as using only ripe cherries, make it less like the more eclectic coffee brewed in towns near the forests.

Union is currently shipping their Yayu Wild Forest coffee only within the United Kingdom. But if you want to enjoy coffee like it’s served in the forests, and throughout the country, a good alternative is a local coffee shop or restaurant that offers Ethiopian coffee ceremonies.

Near me, in Brooklyn, Bunna Cafe normally runs them each week, serving up rounds of thick, sweet coffee out of a jebena, a large, clay pot. Post-pandemic, I’ll be there, a caffeine lightweight, trying to keep up.

While this article is about one of the country’s natural wonders, an armed conflict in Ethiopia’s northern Tigray region has led to hunger, death, and credible reports of war crimes. You can donate to help refugees of the crisis through the World Food Program, a UN partner.

The demise of Arabica's birthplace would be a catastrophe for the industry.
forests

Climate Change and the Dream of Growing Coffee in Sicily

An otherworldly restaurant perched on the edge of a jagged cliff next to a medieval holy city.
Genoa, Nevada