A Secret History of Venice Is Written on the Walls of Its Quarantine Stations - Atlas Obscura
Want to see fewer ads? Become a Member. 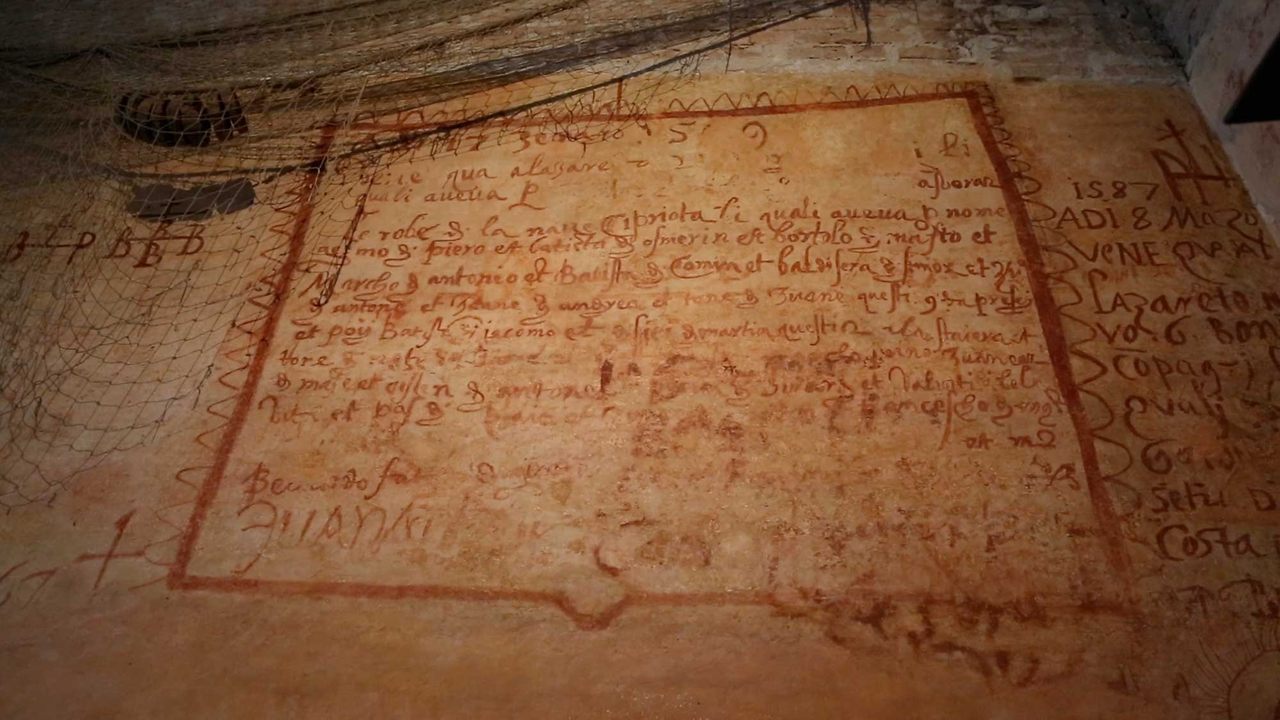 The graffiti of the bastazi includes recounting of historic events. Lazzaretti Veneziani
In This Story
Place

The plague quarantine island home to the alleged "Vampire of Venice."
Place

When he first entered the Lazzaretto Nuovo, on the island of the same name just north of Venice, Gerolamo Fazzini made his way through the overgrowth, which over the years had invaded the entire structure. He entered through a hole to find sunlight streaming in through the cracks made by poplars that had fallen into the walls. “I turned my gaze toward a wall and I noticed patches of color here and there behind the lime,” he says. “It was obvious that there were writings and drawings, but nothing could be read.”

That was in the 1970s. Today, Fazzini is the honorary president of the Archeoclub of Venice and “adoptive father” of the city’s lazzaretti, or maritime quarantine stations. Since then, he has convinced private donors and the National Trust to invest in restoration projects of these historic buildings, which are even today revealing secrets of the Republic of Venice. Those secrets include what he saw beneath the lime on the walls—a mosaic of stories, thoughts, and illustrations, most made by the bastazi, the porters of the Mediterranean trading power.

At the time, Fazzini’s finds were partially cleaned by the archaeologist Ernesto Canal, and documented and studied by archivist Giovanni Caniato. But it’s only been in the past few years that the historical and linguistic heritage that they represent has been understood in full. Francesca Malagnini, a Venetian and associate professor of Italian linguistics at the Università per Stranieri di Perugia, began to study the wall and its graffiti in 2012. Since then she has analyzed and interpreted every sentence: “I wanted to pass on the thoughts of these people, to infuse their breath to the contemporary Venetians. Now I know that, should someday those walls collapse, for any reason, all this won’t be lost.” At first, Malagnini catalogued all the writings in person, climbing on scaffolding with a harness and, in winter, wearing a ski suit to protect herself from the cold in the unheated rooms. She continued the work at home with photographs. The result has been two books and six scientific studies that chronicle the world of these otherwise historically undocumented workers who helped make Venice what it was.

The men behind the writings in the Lazzaretto Nuovo came from the foothills of the Alps, about 120 miles from Venice. The republic had assigned them a tiring, dangerous task, but one that was intended to defend the lagoon—and Europe itself—from the plague that raged in the eastern Mediterranean in the 16th century. The bastazi had to empty the holds of ships arriving from Constantinople and other ports, and sborar le robe—that is, remove the goods from their wrappings, sacks, and trunks, and air them out for days.

The bastazi spent many days on the island of Lazzaretto Nuovo, the second Venetian lazaret, which had opened in 1468, 45 years after the Lazzaretto Vecchio on an island to the south of the city proper. In their free time, some of the porters wrote on the large walls of the tezon grande, a room over 105 yards long that was used for cleaning out the goods. Many of the texts are of the “I was here” variety: the author’s name, the date, the name of the ship that just landed, and where it had come from. But Malagnini found more, including chronicles of historical events, such as the election of a new doge (the chief of state of the Republic of Venice), and drawings that could be religious (representations of the trinity), sentimental (a pierced heart), or profane (a large phallus). “They were completely spontaneous writings,” she says. “Those men freely wrote what went through their heads, they didn’t have to respect any formal or content constraint. This is the reason why reading them really moved me.”

In addition to this insight into the bastazi, Malagnini’s work has revealed previously unknown historical information. For example, it was thought that the porters came from the valleys near Bergamo, but the porters themselves revealed that almost all of them came from Val Sabbia, near today’s Brescia. Surprisingly, these men, born of humble families, knew how to write in Italian. “It’s a vernacular Italian, that is, with regional features, but perfectly understandable even after 500 years,” Malagnini adds. “This is a peculiarity of Italian. While a common Englishman is not able to read Shakespeare smoothly, because the language changed so much in the meantime, we can read Dante’s Divina Commedia [from the 14th century] without much effort, because Italian has been more written than spoken for a long time.” The Republic of Venice was very attentive to education, she says, and “writing was much more widespread than previously thought a few years ago.”

The porters did not have much to say, however, about the type of goods transported by the quarantined ships. That was a choice, Malagnini says: “In the 16th century, Venice was the main landing place for goods from the East. The porters also handled luxury products that Europeans craved. They were kept to the utmost confidentiality about what they were doing at the Lazzaretto.” Loose lips, in this case, could attract the curiosity of thieves. A piece of writing on the wall that dates to 1585 writing confirms how seriously this was taken. It was made by a guardian of the health office (a higher rank than the porters), and it concludes by saying, half-seriously, it seems: “<A>i spioni li sia chavado i ochi,” or “Any spies have their eyes gouged out.”

There is even more to be learned from the graffiti of both the Lazzaretto Nuovo and Lazzaretto Vecchio (where an important restoration project will start shortly, and most writings have not yet been studied). Inscriptions in Turkish-Ottoman and Hebrew have also been discovered, and “they will provide other valuable information” once translated, Malagnini says.

None of this would have been possible, Malagnini acknowledges, without the passion of locals, such as Fazzini, who were invested in preserving the history that the lazzaretti represent.

“The walls of the lazzaretti compose a unique corpus of information that we still have to study in full,” says the archivist Caniato. “We are talking about many square meters to discover. These writings can tell something more about the quarantine procedures and the origin of the ships.”

It won’t be an easy task, especially in the Lazzaretto Vecchio. “There are overlapping layers of writing, and some fragments of the wall have collapsed in the meantime,” says Fazzini. “It’s like composing a puzzle built over centuries.”

A city built on water was always going to struggle with burials—especially when a deadly pandemic came to town.
science

A surprise discovery from Haiti may finally reveal how some famous feral horses got to a distant barrier island.
farms

The rediscovered medieval complex of Beaubec is unique in all of Ireland—and it's just the most recent layer of history unearthed in a humble pasture.
museums

The remnants of Borgund were buried in the dirt for centuries and then sat in museum storage for decades.
Video

4:00
Want to see fewer ads? Become a Member.
From Around the Web
Atlas Obscura Trips
Secrets of Italy: Rome to Venice
View This Trip
Thanks for sharing!