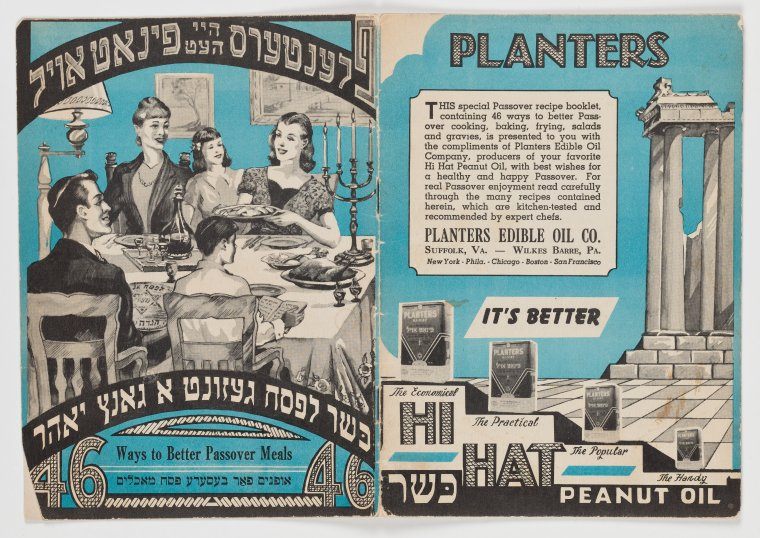 This cookbook doubled as an advertisement for Planters peanut oil. Public Domain

THIS ARTICLE IS ADAPTED FROM THE SEPTEMBER 17, 2022, EDITION OF GASTRO OBSCURA’S FAVORITE THINGS NEWSLETTER. YOU CAN SIGN UP HERE.

Food and drink, many would argue, should be kept far away from books. As someone who once accidentally spilled an entire bottle of Mountain Dew Code Red onto a library book, I understand the impulse.

For most of human history, there weren’t even many books about food. Cooking was largely a skill passed down through hands-on learning and oral tradition. But the 19th century changed that, as printing technology and, more importantly, increased literacy for both men and women created a veritable cookbook boom.

Today, there are cookbooks on every conceivable subject, from preparing insects to recreating Game of Thrones recipes. Passionate collectors have amassed vast collections of culinary books, often out of sheer passion and curiosity for the subject.

As I researched this article, I noticed a common thread in many culinary libraries, where individual collectors with thousands of books ended up donating them to grateful institutions.

Though people have always been fascinated by food, cookbooks have often not been valued accordingly. But now that food studies is growing as a field, books about culinary matters can be incredibly valuable as windows into everything from culture and community to religion and the environment.

While there are wonderful culinary collections around the world, here are four stellar archives within the United States alone.

The world’s largest collection of books and ephemera about wine isn’t in France, Italy, or even Napa. Instead, it’s at the University of California, Davis, where since the 19th century librarians have gathered 35,000 books in 50 languages, all about grapes and how to press, process, and ferment them.

California’s state government mandated the collection’s creation as a bulwark of knowledge in the face of phylloxera, a plant disease that ravaged the world’s grape vines.

But along with technical books on wine-making, the library also has historical treasures, such as a copy of the first book on wine ever written in French, and a pair of dusty boots that once belonged to the swashbuckling grape breeder and plant geneticist Harold P. Olmo, who turned chardonnay into California’s top grape. A Davis professor donated the boots after a local wine bar that had been displaying them shut down.

In 2020, the University of Texas at San Antonio made a splash when they announced that some of the treasures in their Mexican cookbook collection had been scanned and made available to read online.

Handwritten manuscripts, some more than 200 years old, show the roots of modern Mexican cooking, while printed tomes range from the first cookbook ever published in Mexico to 20th-century vegetarian cookbooks. Near the end of her life, the Mexican cuisine expert and author Diana Kennedy donated her own extensive collection of cookbooks and papers to UTSA, as well.

Dozens of the library’s cookbooks are completely digitized and available online. Plus, during the pandemic, the library compiled a selection of recipes from the collection into three downloadable cookbooks.

The New York Public Library’s Dorot Jewish Division is home to what is likely the world’s largest archive of Jewish cookbooks, at an estimated 2,500.

The late curator Roberta Saltzman was responsible for at least 700 of those books. Saltzman (who, funnily enough, wasn’t that into cooking) trawled eBay for rare and regional cookbooks, which she purchased with her own money. Saltzman had a keen interest in community cookbooks, such as The When You Live in Hawaii, You Get Very Creative During Passover Cookbook.

But she also picked up corporate cookbooks intended for the Jewish community, such as 25 Unorthodox Things To Do With A Hebrew National Salami. As a historical and regional snapshot of Jewish food around the world, the collection is invaluable.

Last month, Janice Bluestein Longone passed away at the age of 89. Her passion for food and culinary history led her, in 1972, to launch a rare culinary books business out of her home in Ann Arbor, Michigan. Food luminaries such as Julia Child and James Beard often sought her out for research help.

It was Longone who rediscovered the earliest known cookbook by a Black author in the United States, Malinda Russell’s A Domestic Cookbook. It was the single surviving copy known to exist.

More than 20 years ago, Longone and her husband began donating their prodigious collection to the University of Michigan. Today, the archive consists of nearly 25,000 books and other food-related items, a testament to Longone’s dedication to seeking out, sharing, and preserving culinary history.

Churches, scout troops, and clown collectives all depend on Morris Press.
libraries

A librarian with a love for eBay built this trove of culinary history.
objects of intrigue

Opponents of Oliver Cromwell published his family recipes, with a side of fake news.
Video