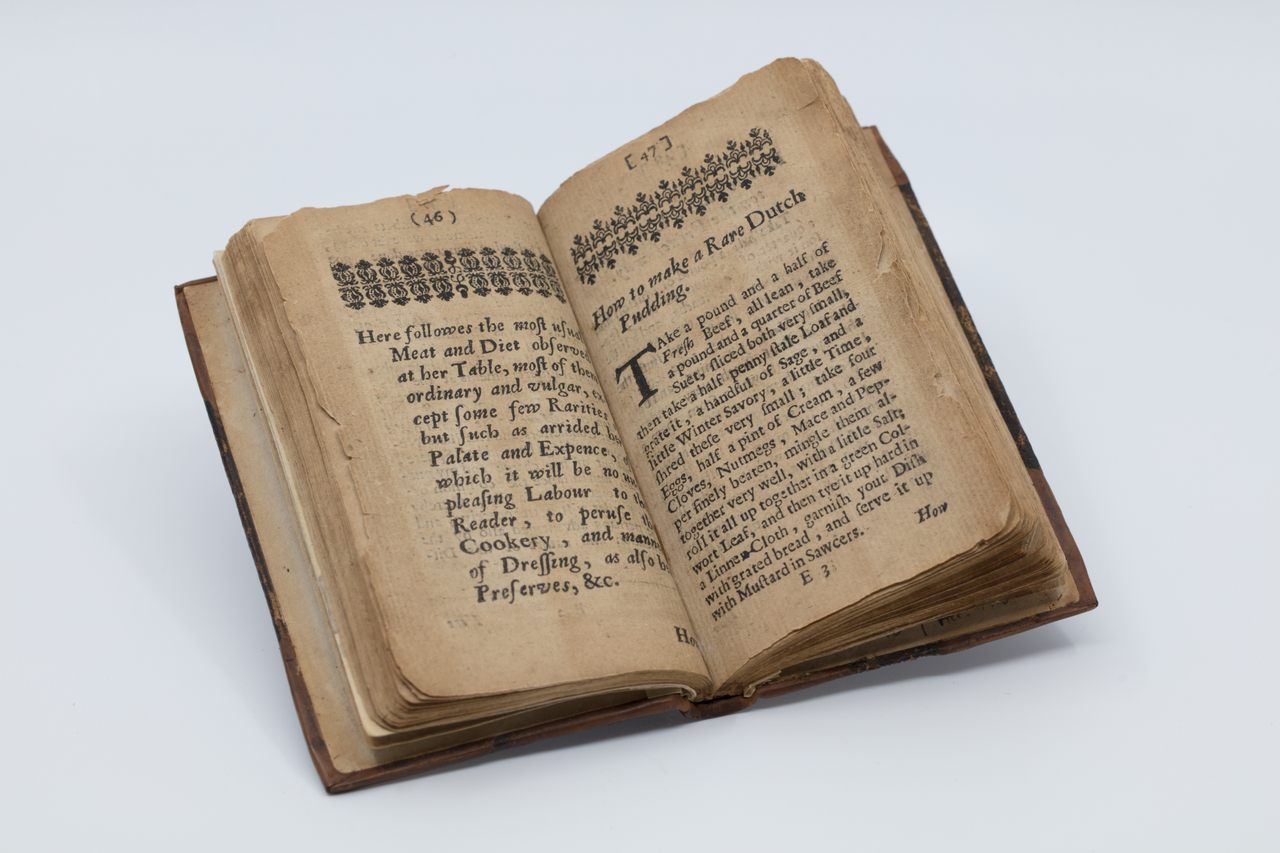 This 17th-century cookbook contains both recipes and propaganda. All images courtesy of the Cromwell Museum, Huntingdon, UK
In This Story
Destination Guide

Since January, the Cromwell Museum in Huntingdon, England, has been selling copies of one of the strangest cookbooks ever published. That’s according to Stuart Orme, the museum’s curator, who’s also written the new introduction to The Court and Kitchen of Elizabeth, Commonly Called Joan Cromwell, the Wife of the Late Usurper.

This is no Joy of Cooking. Instead, the book begins with what Orme calls “a very ranty essay” against Oliver Cromwell and his wife, Elizabeth. Cromwell, as the first non-royal to preside over the British Isles, was still a controversial figure at its publication in 1664, several years after his death. While the recipes that make up most of the book are typical of the time, the anonymous editor peppered the text with political, personal, and sexual slander aimed at tarnishing the Cromwell legacy.

Elizabeth Cromwell herself had nothing to do with the cookbook, a 1665 copy of which is on display in the museum. Though she was still alive at the time, she was, by all accounts, not a prominent figure in society or politics. She certainly never published anything, much less a cookbook. However, Orme believes that the recipes in The Court and Kitchen of Elizabeth did come from the Cromwell family records.

A cookbook may seem an odd vehicle for political propaganda, but Cromwell’s polarizing legacy was dominant enough to fill every possible medium. When the book was published, Cromwell was just a few years dead. Over his lifetime, he signed the death warrant for King Charles I and helped establish a republic in place of England’s traditional monarchy. But by 1664, with the monarchy restored and Charles II on the throne, royal supporters had an axe to grind. “There was a lot of anti-Cromwell propaganda produced to blacken the name of the Cromwells and to stabilize the Royalist regime,” says Orme. This cookbook was explicitly propaganda.

“It would be a bit like today, if you were to go out and buy a cookery book [supposedly] written by Michelle Obama and the first third of it was an essay by Donald Trump saying how awful Barack Obama was,” says Orme. But the writer primarily aimed his scorn at Elizabeth, for unknown reasons. Even the full title of the book, The Court and Kitchen of Elizabeth, Commonly Called Joan Cromwell, the Wife of the Late Usurper, contains an insult against her. Elizabeth’s nickname wasn’t Joan. Instead, ‘Joan’ was a term of the era for a prostitute.

The cookbook’s slanderous attacks often concern Elizabeth’s household management and cooking. For example, one anecdote has Cromwell complaining during dinner that there isn’t enough orange sauce served with his veal. Elizabeth retorts that if Cromwell had wanted more orange sauce, then he shouldn’t have carelessly gone to war with Spain, the source of their oranges.

The 102 recipes are typical middle-class dishes of the era, from sweet pudding made with bone marrow (“which she usually had to her breakfast”) and a venison pie (“a la mode Cromwellian”). But the very nature of these recipes, says Orme, was itself another charge leveled at Elizabeth Cromwell. The essay in the book paints Elizabeth as a grubby, grasping skinflint, cooking food without elegance as a reflection of her own non-royal origins. “Part of the argument that the editor of the cookery book makes is that the Cromwells are unfit to run the country because, look, they were far too common,” says Orme. “It’s a lot of snobbery,” The recipes themselves, though, are solid. Orme recommends the carbonnade of beef, a stew that he says is “really nice, actually.”

The cookbook has long been a source of curiosity for scholars and visitors to the museum, which is why the institution decided to print 500 copies for distribution. Currently, it’s for sale online, but not yet at the museum, which has been closed since Christmas due to the pandemic. While the income from the books has been modest, Orme says that “every little bit helps at the moment.” The Cromwell Museum hopes to reopen on April 17, which is good news for those that want to see the tome of 17th-century culinary slander in person.

The French literary icon thought this 1,150-page compendium on cookery would be his masterpiece.
libraries

They're saving food history for the future.
food