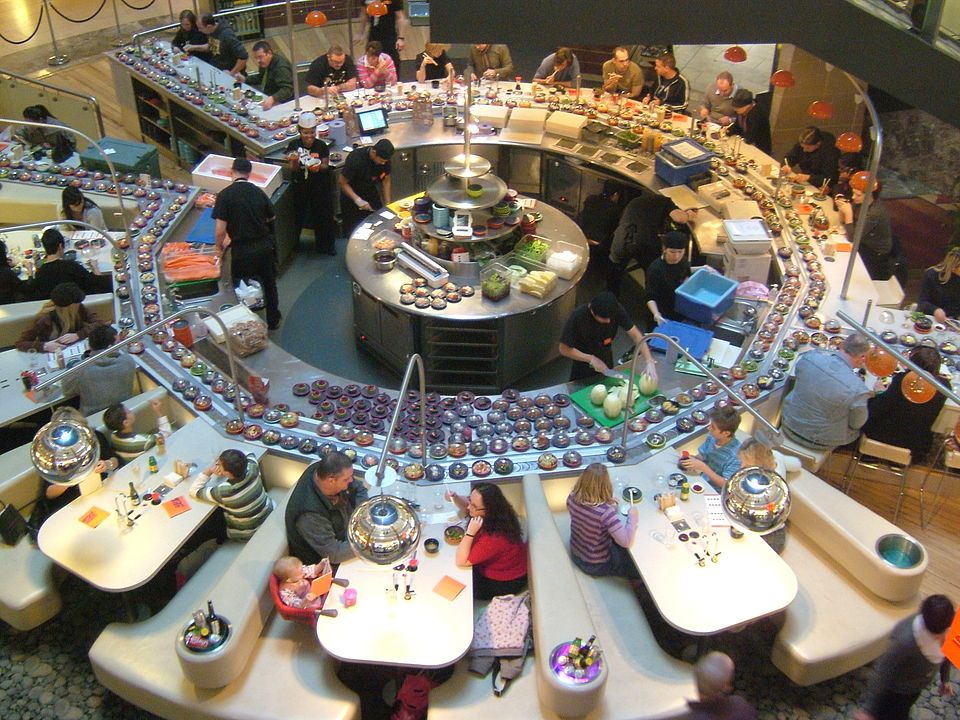 This article is adapted from the September 25, 2021, edition of Gastro Obscura’s Favorite Things newsletter. You can sign up here.

On a recent visit to San Francisco, I stopped for lunch in Japantown. Online reviews had called the place I picked a “sushi train” restaurant, but when I entered, there were no tiny locomotives towing nigiri in sight. Perhaps, I thought, as I ordered off a touchscreen, because of the pandemic.

Then a whirring sound made me jump, and a sleek, tiny bullet train swept by at eye-level, carrying a plate of sushi to the customers seated to my right.

These automated systems are a feature of what are usually called conveyor-belt restaurants. Often associated with Japan, they arose as both a way for restaurateurs to save on labor costs and for busy city workers to order quickly without too much human interaction. But the idea of replacing waiters with tiny transportation systems has a long history, and has spread around the world.

This week, we visit China, Japan, and the USA to explore each nation’s dominant genre of “food that moves,” as well as why the concept is so appealing to restaurant owners. Here’s a hint: You might be seeing a lot more of these restaurants, especially as COVID concerns and hiring shortages linger.

In the Forbidden City’s Pavilion of Floating Cups, visitors will spot a large stone tablet. This artifact once had water running through the winding, snake-like loop carved into its surface.

Similar setups exist in mansions and pavilions across China, all inspired by a series of poems from the 4th century. Literati set cups of wine to float through tiny artificial rivers, often as a drinking game. Players had to compose complete poems before a cup of wine made a complete circuit.

These days, it’s usually tea in the cups, and there’s no requirement for off-the-cuff poetry. Here are two spots to try it out:

Japan is the undisputed leader of conveyor-belt restaurants. Restaurateur Yoshiaki Shiraishi is credited for developing the classic kaiten-zushi conveyor-belt system, inspired by a lack of staff for his small business.

Shiraishi spent five years developing his sushi carousel before opening Mawaru Genroku Sushi in 1958, which eventually grew to nearly 250 outlets. There are less than a dozen left, but the original is still open, in Osaka Prefecture.

Shirashi’s biggest legacy was inspiring thousands of other restaurant owners. Conveyor-belt sushi has today become a familiar, standardized concept in cities worldwide. Customers sit at a counter or table next to the moving belt, and grab plates of sushi rolls off the line. The plate’s color indicates its contents’ price, and waiters come around to tally the final bill.

Since the 1950s and 1960s, American waitstaff have been hitching plates of burgers and fries up to model train sets built into their dining rooms.

At Fritz’s Railroad Restaurant in Kansas City, railroads weren’t originally in the name or the mind of Fritz Knopf, who opened his diner in 1954. Labor shortages in the early 1970s spurred him to try something new.

A tinkerer and inventor, Knopf assembled a food-delivery system in the family basement before installing his “Skat Kat” conveyor belt in the 1970s. People kept calling his invention a train. So he gave in, changed the name, and added train-themed decor.

Many other restaurateurs across the U.S. were similarly inventive. Along with Fritz’s, here are two other restaurants where food comes via a miniature rail system.

1. It’s fun, especially for kids. While conveyor-belt sushi in Japan caters to adults, food-delivery via train, boat, or belt is entrancing for children. Kura Sushi, a chain with locations across the USA, Taiwan, and Japan, even offers toy prizes based on the colors of plates snatched off the line.

2. Customers often pay more. At kaiten-zushi establishments, the sushi is often priced quite reasonably: two to five dollars a plate is typical. But the psychological lure of the colorful sushi and moving parts often means that diners are left staring at a tall stack of plates at the end of their meal.

3. Reduced labor costs. Both Yoshiaki Shiraishi of Genroku and Fritz Knopf of Fritz’s couldn’t find enough staff for their dining rooms, inspiring them to tinker with food-delivery set-ups.

4. They’re relatively contact-free. During the pandemic, a new generation of these restaurants has expanded beyond sushi and burgers. Recently, cheese and charcuterie have become the latest addition to the conveyor-belt circuit. Establishments such Pick and Cheese in London and Culture + Co in Nashville, Tennessee, feature carousels of cheese and charcuterie for customers.

Podcast: The Curse of the Kreischer Mansion

A server squeegees the window, too.
restaurants

A One-Table Restaurant Is Opening in a Swedish Meadow

There's just one chair, too.
restaurants

Branch out, dine in, and save your city.
railroads

No passport is required to eat around the world at this elegant restaurant.
Want to see fewer ads? Become a Member.
From Around the Web
Atlas Obscura Trips
Artisans & Exiles: Exploring the Hidden Traditions of Japan’s Sado Island
View This Trip
Thanks for sharing!