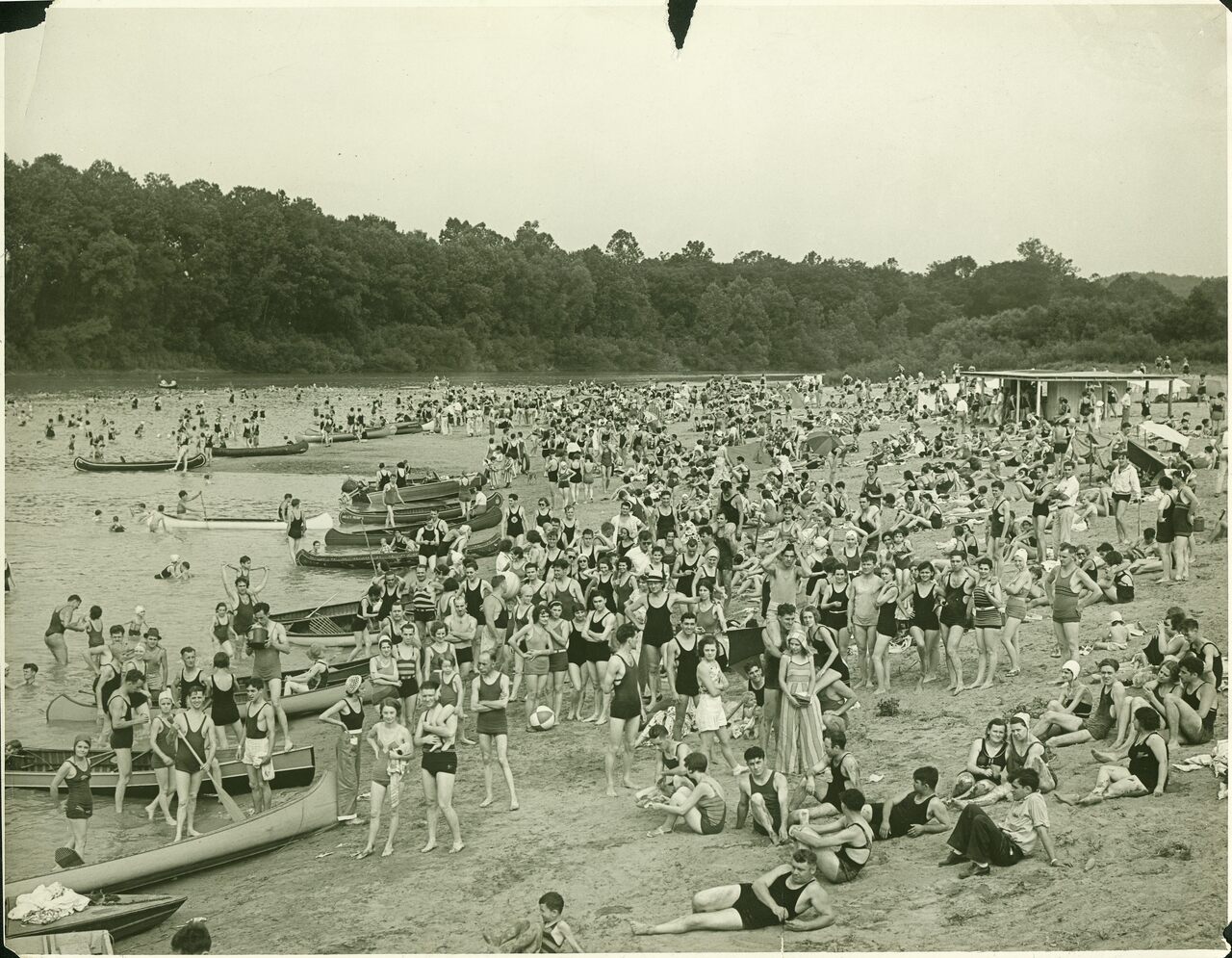 A crowd of swimmers and sunbathers on Lincoln Beach in the 1920s. Courtesy Missouri Historical Society
In This Story
Destination Guide

Ballwin, Missouri, a suburb to the southwest of St. Louis, is home to a nearly 2,000-acre public recreation area called Castlewood State Park. The park, which kisses the free-flowing Meramec River, was formally established in 1974. Since then, its trails have attracted bikers, hikers, and more.

But in the early 20th century, when the Missouri Pacific Railroad began shuttling city dwellers off to the great outdoors, Castlewood was a very different place. It was a bustling resort town.

“People lived in downtown St. Louis, and they got smokin’ hot during the summertime,” says Kevin Albrecht, deputy regional director of Missouri State Parks. “They had the rail, so people would hop on the train to [go] cool off in the river.”

Recently, a visitor at Castlewood stumbled upon a staircase to nowhere, obscured by nature and time. Now that discovery is prompting a deep dive into the history of the area and its early years as a summertime social setting, long before it became one of Missouri’s several state parks (after a conservation group called the Open Space Council of St. Louis encouraged the state of Missouri to take over the land).

The Castlewood resort was open from roughly 1915 to 1940, but its heyday as a vacation getaway was the 1920s. “Local people who lived in the area—west St. Louis County—probably got there by foot or bike or car,” says Albrecht. “But the lion’s share of [people coming out] these weekends were coming from [the city] … They had special cars made so that you could bring your canoe on the train … [you could] hang it up and bring it to Castlewood.”

Up until World War II, thousands of families used the Castlewood depot, especially on hot weekends. It was their gateway to summer recreation—swimming in the river, dancing in one of the seasonal clubs, ferrying to the popular Lincoln Beach sandbar.

The walls of the park office today are lined with old photographs donated by locals whose parents and grandparents vacationed at Castlewood, and who have worked to preserve a bit of the site’s lost history. Newspaper clippings advertise the popular Lincoln Lodge. Personal photographs illustrate the roughly 10,000 visitors that Castlewood received each weekend, including an aerial shot that Albrecht says shows “people by the hundreds.”

But by the middle of the century—after the advent of air conditioning made it more appealing to spend summers in urban areas—tourism at the riverside resort destination waned.

“Tastes changed back then,” says Albrecht, “but probably the biggest single factor [was] the automobile. When you think about the time frame, [not] that many people had automobiles … but by the time you get back from World War II, the housing boom happens and then everyone has a car, so people started going other places.”

Today, the history of Castlewood as a summer hotspot is largely grown over. Most of the man-made buildings here, and the man-made beach, have been erased by decades of frequent river flooding.

“Over time natural deterioration took over,” says Albrecht. “Castlewood is one of five parks on the Meramec River … people started selling and abandoning properties, so a lot of it has just gone away with time and flooding.”

Yet the grand staircase, a concrete crescendo that runs from the bottomlands up toward the limestone bluff, still remains. Another wooden staircase, which once led vacationers from the train depot to their hotels, now takes explorers 250 feet above the river to a hiking trail. These steps have been maintained because the public still uses them, says Albrecht.

They also offer a hidden route for the sharp-eyed visitor: “There’s a pedestrian tunnel that goes under the railroad to the bottom of the staircase, and then you can walk up to the bluffs.”

Ruins of a few other buildings remain as well.

These foundations may have belonged to one of Castlewood’s former dance halls or general stores. For years, one of the resort’s old wooden cabins was used as the on-site residence of the park superintendent. But six years ago, says Albrecht, after several failed attempts to renovate it, the structure was demolished.

Vestiges of the Lone Wolf Club, a Prohibition-era speakeasy open only to private members, can still be seen as well. Its stone wall and archway, which helped conceal illegal drinking in the 1920s, are on the grounds of Ballwin’s neighboring Wildlife Rescue Center. In fact, says Albrecht, “the ruins of the Lone Wolf Lodge may well be the best preserved piece [of old Castlewood] that remains.”

Since the resort stopped welcoming hot visitors in the 1940s, various campaigns to restore it to its former glory have surfaced. But none has come to fruition. It seems likely none ever will.

At least one thing hasn’t completely changed. The Missouri Pacific Railroad, which once ushered guests out to the Meramec River, still runs past the wood. Only now it’s called the Union Pacific.

In This Moon Landing, Everything Is Made of Butter

A fantasy author's 37-year-old cache may soon be unearthed in one of the city's 220 parks. But which one?
rivers

For decades, the Mississippi River town of Muscatine was the pearl-button capital of the world.
subterranean

From royal abode to performance-art venue, Malcha Mahal has a rich and mysterious history.
Read more
Thanks for sharing!