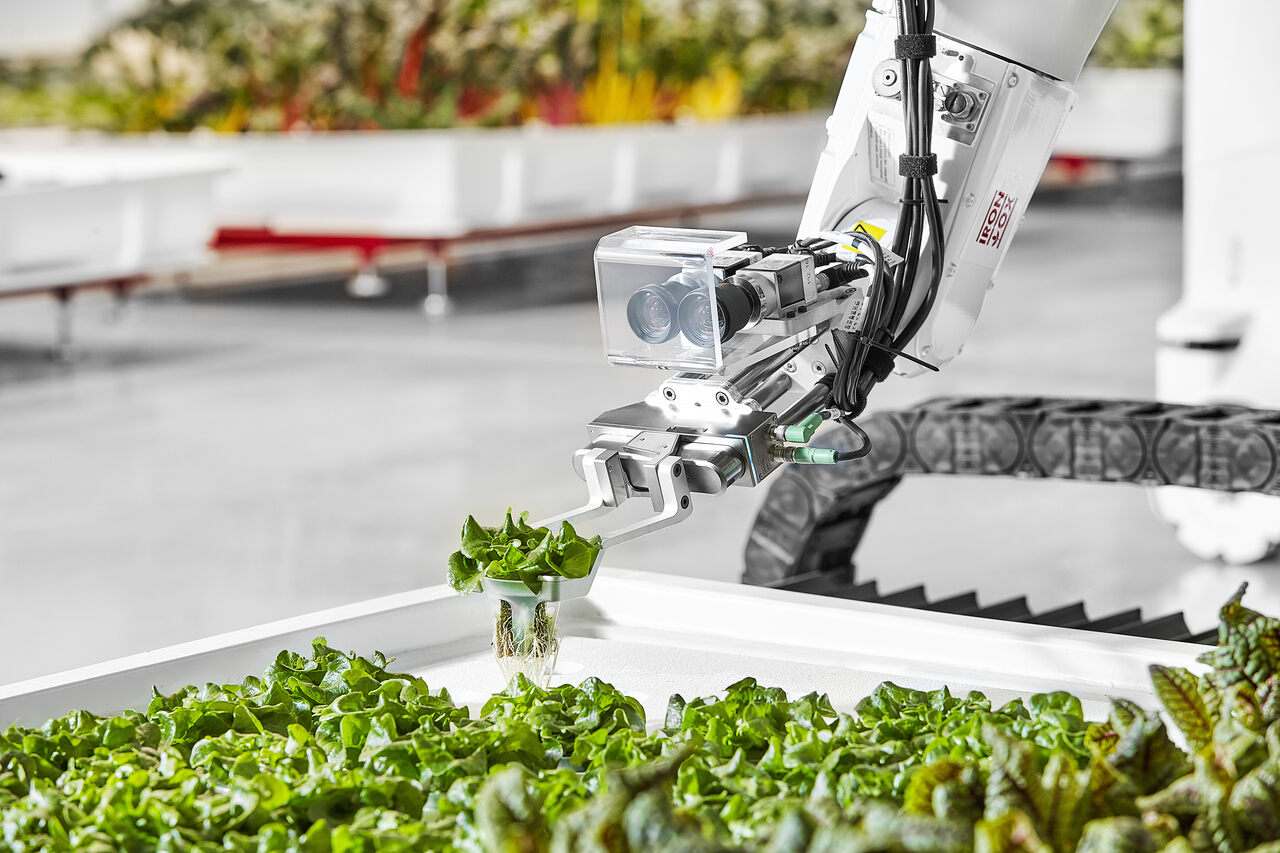 An industrial robotic arm with custom gripper and sensors constantly reorganizes plants as they grow. Iron Ox
In This Story
Destination Guide

In San Carlos, California, under LED lighting in a controlled, 8,000-square-foot environment, a team of autonomous robots is whirring night and day between rows of leafy greens. There is no dirt, there are no pesticides, and on this indoor farm, the only humans work behind screens. This is one of the world’s first autonomously operated commercial farms, and their produce is now flying off the shelves.

As a child, roboticist Brandon Alexander spent summers in Oklahoma helping his grandfather grow potatoes, peanuts, and cotton on a 6,000-acre farm. But as CEO of Iron Ox, the start-up company behind the automated farm, he says traditional farming is now his biggest competition—and granddad understands. “He knows that for farming to survive, this is almost inevitable,” says Alexander.

At Bianchini’s Market, a family-owned grocery in the San Francisco Bay Area, the two worlds are competing for the first time. As it stands, the robots are holding their own: Between retail buyers and several local restaurants, including San Francisco’s Trace, Iron Ox saw sales more than double last quarter.

The San Carlos operation is not completely automated just yet. Human staff still plant the initial seed and handle post-harvest packaging. But the rest is left to robots.

Angus, a half-ton aluminum porter, roams the “field” of trays, or pallets, 24/7 with an overhead camera. On traditional farms, plants need space for their roots to absorb nutrients; on hydroponic farms, however, seeds can be planted in their trays mere inches apart. As they grow and begin crowding each other, though, this does require more attention from, say, a sleepless robot. Angus carries the 800-pound pallets in need of rearranging to a separate, industrial robotic arm that gently re-shuffles the growing pods into new compact rows. Angus is also responsible for IPM (integrated pest management) and scanning for aphids, mildew, and browning. The robotic arm’s stereo-camera (“two cameras that kind of mimic your eyes,” Alexander casually explains) creates a 3-D model of at-risk produce that’s run through a machine algorithm to diagnose the issue and quarantine or prune accordingly. “The Brain,” a cloud-based AI software, coordinates all these autonomous functions while monitoring light, nitrogen, and water levels. “It’s a neighborhood farm,” says Alexander.

He’s not wrong. Produce from Iron Ox travels less than a mile to reach Bianchini’s—itself a mere 25 miles from downtown San Francisco. In fact, evening shoppers at Bianchini can buy produce robo-picked that morning, and at price points that compete with outdoor farms: A bunch of basil sells for $2.99; four heads of baby lettuce for $4.99; and a bunch of red-veined sorrel for $2.99.

Typically, the cost of human labor required for indoor hydroponic farms has made their produce inaccessibly expensive. Jake Counne of Backyard Fresh Farms, a similarly autonomously assisted farm in Chicago, told the Chicago Tribune that employing robotics reduced his labor costs by 80 percent. For this reason, building a farm around robotics and A.I. could crack the code of making indoor farms feasible. And while Alexander’s leafy greens remain local, the consequences of Iron Ox’s success may not.

Using robotics to make indoor hydroponic farms practical could alleviate a host of agricultural problems. In 2016, World Water Forum cited farming as a major contributor to global water scarcity. But farms like Iron Ox use 90 percent less water than outdoor farms. In a 2019 report on the challenges of feeding 10 billion people by 2050, The World Resources Institute cites concern over “the difference between global agricultural land area in 2010 and the area required in 2050 … if crop yields continue to grow at past rates.” According to Alexander, Iron Ox yields 30 times more produce per acre over the course of a year than conventional farms, and without using any arable land. A 2016 report from the National Center for Biotechnology on Chemical Pesticides urged a “drastic reduction in the use of agrochemicals,” and indoor farms alleviate the need for herbicides and pesticides.

For now, Iron Ox’s goals are more pointed. “How can we make your salad pop? We try to prioritize that,” Alexander says. Following the success of the San Carlos location, he does plan to set up robotic farms near other U.S. cities, though he’s not announcing anything yet. Iron Ox is, however, hiring humans for plant science and growing teams.

A UNESCO site that doubles as a working farm represents a shift in conservation.
farms

During the pandemic, arugula is just as exciting as a Choco Taco.
museums

Restoring the grounds and its rare, heirloom crops recreated what was effectively the country's first seed bank.
Video • Object of Intrigue

Snap judgments may spell trouble for what was once the king of California apricots.
Gastro Obscura

Beneath a layer of spines, this cactus sprouts asparagus-flavored buds.
Gastro Obscura

The unique style born out of the California Gold Rush blends the crispness of a lager with the flavor of an ale.
Gastro Obscura

The biggest names in Japanese technology vied to bring them to market.
Read more
Thanks for sharing!