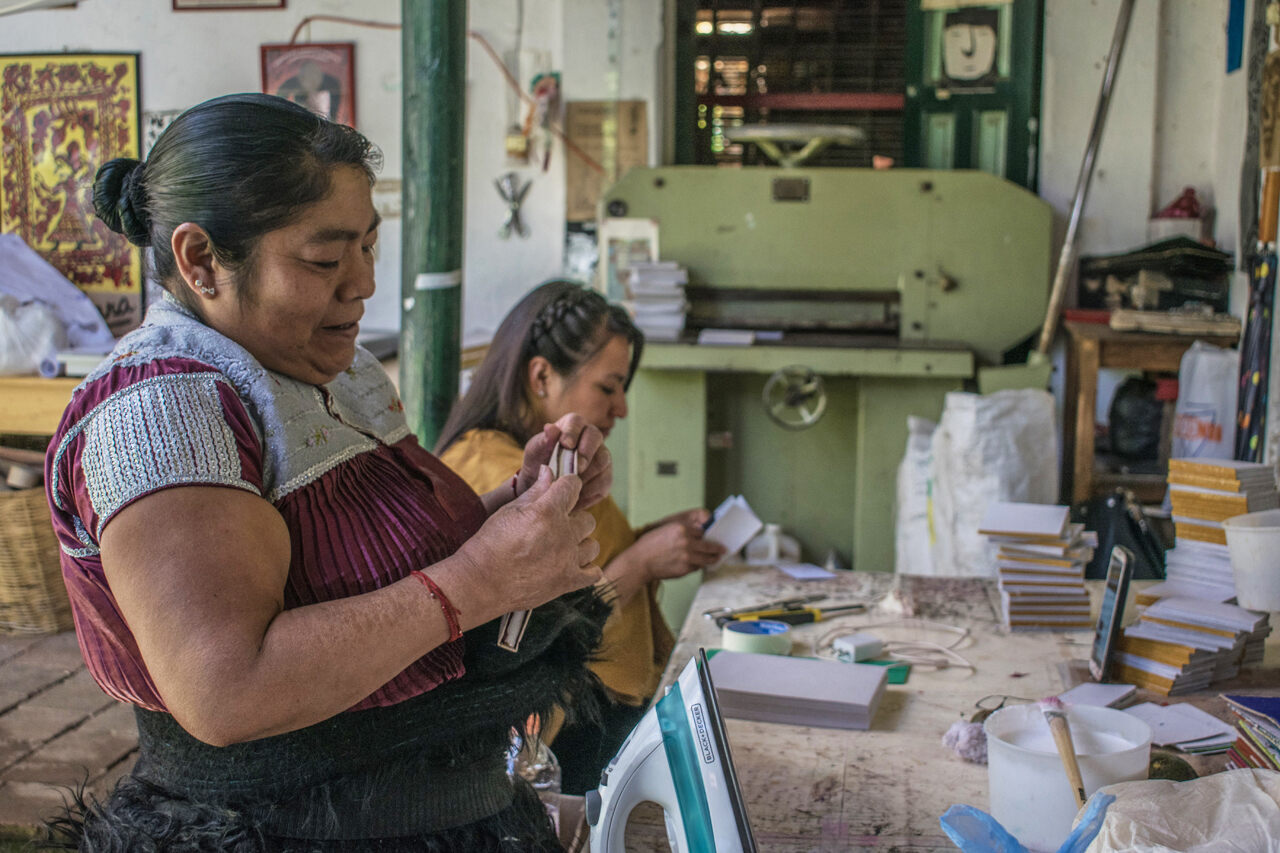 The Taller Leñateros—“Woodlanders Workshop”—has been operating since 1975, using recycled materials and ancient bookmaking techniques. Jessica Vincent
In This Story
Place

I was walking aimlessly through the pastel-hued streets of San Cristobal de las Casas, trying to get a feel for what my guidebook had described as southern Mexico’s “most beautiful colonial city.” One particular street was quiet, dusty, and less colorful than the rest. But there was something about it—perhaps the faint sound of a Mexican ballad escaping from a rusted window, or maybe the beat-up aquamarine VW Beetle at the end of the road—that invited me to turn down it.

I hadn’t been walking long before I spotted an unusual sign outside a sad-looking, graffitied colonial house: a black-and-white etching of an ancient Maya riding a bicycle, wearing an enormous feathered headdress that fluttered in the wind behind him. Next to it, a handwritten note pleaded “Save our workshop!”

Intrigued, I pushed open the unlocked wooden gate and stepped inside. The walls of the courtyard, though peeling and rotten with damp, popped with floor-to-ceiling splashes of orange, green, and yellow block prints. The dusty adobe brick floor was covered with discarded books, posters, cardboard, and plastic, leaving barely enough room to stand.

Rising proudly from the sea of paper that sprawled across the courtyard, a handmade tree cobbled together from sun-bleached driftwood held three thick, heavy books on its leafless branches. Careful not to trample the paper debris that now covered my feet, I leaned forward to get a closer look. As I did, I heard a low, shy voice behind me.

“Ah,” said a woman standing there, wearing a thick wool skirt and a hand-stitched, fuschia-pink blouse. “You’re here to see the books? Come with me.”

As she led me from the paper-strewn courtyard into a small gift shop filled with handmade books, posters, and notebooks, I learned where I was.

Taller Leñateros is Mexico’s first and only Tzotzil Maya book- and papermaking collective. Founded in 1975 by the Mexican-American poet Ambar Past, the workshop is dedicated to documenting and disseminating the endangered Tzotzil language, culture, and oral history. And it does so environmentally, using only recycled materials (leñateros alludes to those who get their firewood from deadwood, rather than felled trees).

The project began when Past, escaping an unhappy marriage, traveled to the rural highlands of Chiapas, Mexico’s southernmost state. She wound up staying, and for the next 30 years lived among the indigenous women of San Cristobal’s surrounding villages. As she learned their language, she noticed that they spoke in couplets similar to those found in the Popul Vuh—the most famous and informative ancient Maya book yet discovered.

But none of these women could actually read or write Tzotzil. They used the historic, metaphor-riddled tongue in everyday conversation, but had never put their own words on paper. Inspired, Past got to work recording and translating their ancient Tzotzil poetry. Her hope was that, one day, they would publish the world’s first modern Maya book by the female indigenous community of Chiapas—and, in the process, grant us insight into both an ancient language and an ancient way of looking at the world.

Once 150 women agreed to let her record their poetry, Past bought property in San Cristobal. She set up a modest workshop there so that she and the women could collaborate. Past would transcribe and translate the recordings, and the women would produce the book using ancient Maya bookbinding techniques.

“It took over [20] years to make,” says Petra, the woman who had welcomed me to the workshop (and the daughter of one of the original 150 women). “Past had to first record hundreds of hours of poetry and then carefully transcribe it, not to mention the work that goes into handmaking a book from natural materials.”

As Petra spoke, she turned the thick, grainy pages of Incantations: Songs, Spells, and Images by Mayan Women—the first book in over 400 years to be written, produced, and published by indigenous Mayas.

The book that had caught my eye on the leafless tree featured the face of Kaxail, whom some call the Maya goddess of the wilderness, made from recycled cardboard, corn silk, and coffee. Inside the book, 295 handmade pages and silkscreen illustrations tell Tzotzil women’s stories of love, death, birth, marriage, sex, and survival, deploying an elaborate syntax that’s changed little since the Mayas’ rule here in the year 600. (Various attempts to kill that syntax, first by Spanish conquistadors and then by Mexico’s government, have proved fruitless.)

“We want to show the world that the Spanish conquistadors all those years ago did not destroy our culture,” Petra says as she traces the outline of Kaxail’s somber face. “We may have changed and adapted to modern times, but our language, traditions, and way of life essentially remain the same. Recording our Tzotzil language, and bookbinding itself, is the only way we know how to protect that heritage.”

Before the Spanish conquistadors arrived in the New World, the ancient Tzotzil Maya from the Chiapas region—the Woodlanders’ ancestors—were revered as the empire’s most talented bookmakers. Using plant dyes as ink and tree bark for paper, they created the Maya codices—sacred, hand-painted books that document celestial movements, spells, divinations, and ceremonial sacrifices to gods.

In the 16th century, the Spanish burned every Maya library across Mexico, calling the codices “nothing but superstitions and falsehoods of the Devil.” Today, only four original codices remain (three of them are stored in museum vaults in Europe). That has left this precious bookbinding tradition—not to mention the stories and histories between codice covers—forgotten by much of the Mexican population.

“We want to encourage our people to reconnect with their own culture, and to be proud of it,” Petra says. ”That’s why, every time we make a new book, we try to donate some copies to the indigenous communities. This way they can be proud of their heritage, and they can teach their children and grandchildren to be proud of their culture too … because it is they who now have the responsibility of keeping it alive.”

As Petra finishes her sentence, we step out of the gift shop and into a large, sunny outdoor courtyard, perhaps even more chaotic than the paper-strewn entrance. Here, corn husks, palm leaves, and agave boil over open wood fires, while a pair of young women, two of the newest Woodlanders, detangle and trim the thick, freshly boiled fibers ready to be spun in a bicycle-powered mill. My mind flashes to the image of the Maya man on the bicycle I’d seen at the entrance—clearly a logo that represents a fusion of ancient traditions and more recent technologies.

“Writing down Tzotzil poems [isn’t] enough,” says Petra. “We [also] want to resurrect the dying art of Maya bookbinding —the extraction of natural dyes and fibers and the use of our hands from start to finish. But it hasn’t been easy.”

Today, there are far fewer Woodlanders than in years past. Higher prices for materials, such as paintbrushes and glue, and fewer visitors have only compounded the problem.

“When my mother joined the collective, there were 150 women,” Petra says. “Now, we are just seven here full-time. We used to get lots of tourists pass[ing] through to buy our books and posters—we even held bookbinding workshops … But now we’re lucky if one person comes a day.”

The collective faces other challenges as well. When I ask about the sign I’d seen outside, Petra replies, “Some people are trying to take our workshop away from us.”

Taller Leñateros is in the midst of a legal battle to hold on to the property it has owned since the early 1980s. If the Woodcutters lose it, rising property prices in San Cristobal could make it difficult for the collective to get back on its feet.

“We’ve had to invest many of our profits into legal fees, which is hurting us a lot—as you can see from our leaky roof,” Petra says with a rueful chuckle. “But we are trying to stay positive and carry on as normal. We even have a new book coming out soon!”

That book is Mamá Luna Nene Sol, the third volume produced by the collective. The first was the groundbreaking Incantations, published in 1998. After that came the critically acclaimed Mayan Hearts, in addition to thousands of handmade posters, notebooks, and postcards. Petra says that Mamá Luna Nene Sol will be released just in time for the International Anthropology Book Fair’s 30th anniversary, this September.

When Past and her team of 150 Tzotzil women first came together over 40 years ago, their biggest challenge was reviving a lost literary tradition. Today, the few women who remain are striving, against long odds, to maintain their predecessors’ legacy. Whether they’re fighting legal battles, finding cheaper ways of getting the books to market, or persuading backpackers to stop by for a bookbinding workshop, the women here have made one thing very clear—their fight to keep the ancient Maya culture alive endures.

The humanist scholar fudged a language into existence.
witchcraft

A tiny group of scholars added 500 words and made 5,000 revisions to the Dictionary of the Irish Language.
Video • AO Docs

If it weren't for aerial surveys and lidar imaging, Aguada Fénix might never have claimed the superlative crown.
Read more
Thanks for sharing!