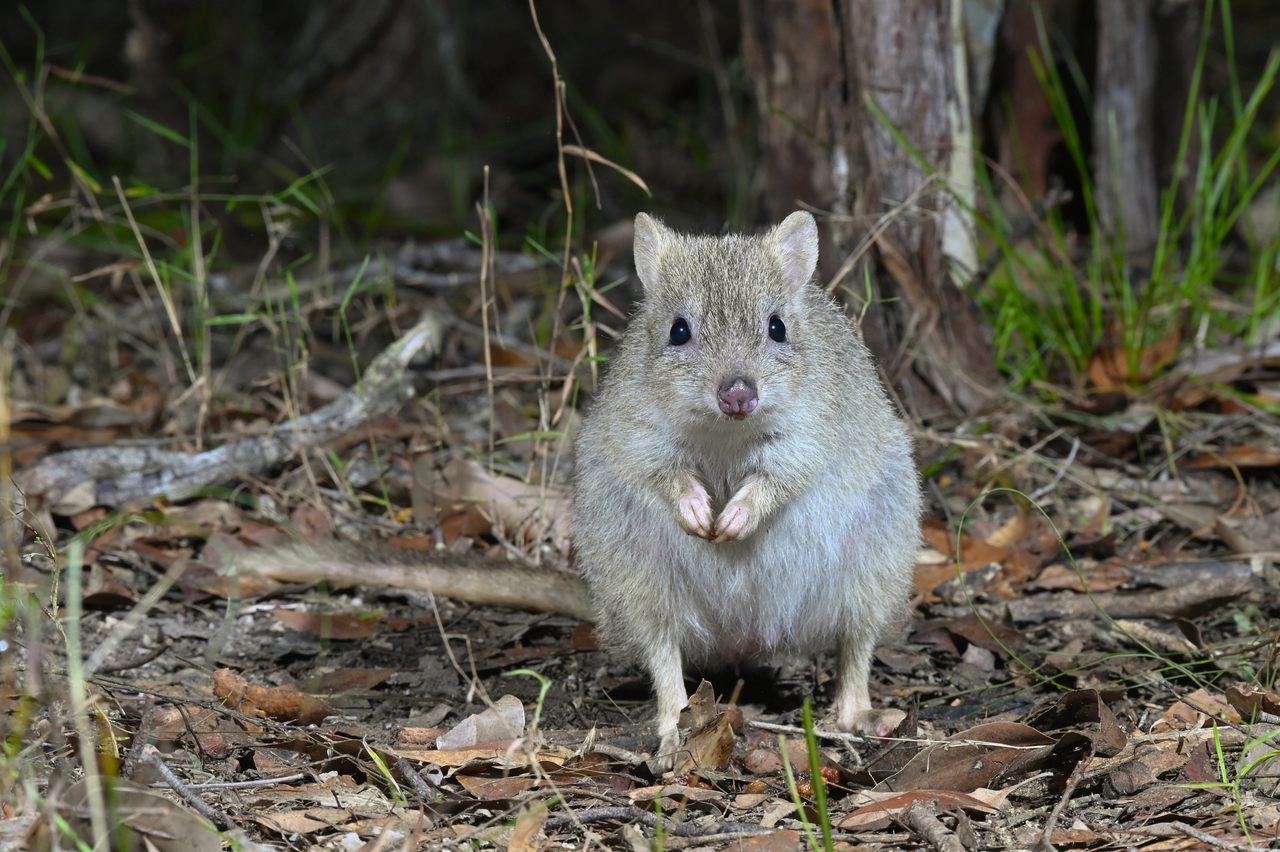 One of only two remaining populations of an “ecosystem engineer” truffle-eating marsupial found in Queensland is much smaller than originally thought and could be declining further, according to new research. Scientists studying northern bettongs on the Mount Carbine Tableland in northeastern Queensland have estimated the number of animals in that location is fewer than 50, sparking concerns about the viability of that population, even in the short term.

Northern bettongs have suffered enormous declines since European colonization and are among the Australian species at high risk of extinction. They live in eucalypt forest on the fringe of rainforest in the Wet Tropics of Queensland World Heritage Area and have a diet that consists heavily of truffles.

The foot-tall marsupials are sometimes referred to as “ecosystem engineers” because of the important role they play in dispersing fungi when they dig in the soil for food. Northern bettongs are found in only two locations, the first in Lamb Range in the Cairns region, where the population has been studied for about 20 years and numbers between 700 and 1,000. The second, the Mount Carbine Tableland population in Mount Lewis National Park, has been less studied.

Researchers working with the Australian Wildlife Conservancy, the Western Yalanji Aboriginal Corporation, and the Queensland Parks and Wildlife Service have been monitoring the Mount Carbine Tableland population since 2017. They used cameras, live-trapping, and GPS collars to track numbers and how the animals were moving through the habitat.

Manuela Fischer, a wildlife ecologist with the Australian Wildlife Conservancy, says that, prior to the surveys, it was assumed the population in that area numbered up to 1,000. But after completing surveys every six months for the past four years, she says the reality appears very different.

“We’ve found that there may be as few as 50 animals left in that area which is much smaller than anticipated,” Fischer says. “It’s a very small population and definitely on the brink of extinction.”

Fischer said researchers found the animals in that area had a lower body mass index than the animals in Lamb Range, where almost every female bettong captured during survey work was carrying pouch young. “In Mount Lewis, it’s only 50-60 percent of the females, which is very concerning,” she says. Fischer says the low numbers and geographic isolation mean urgent work is needed to try to boost the population.

Northern bettongs face multiple threats including from weeds, particularly lantana, and feral cattle and pigs that overgraze and dig, causing damage to their habitat. Pigs also dig for truffles, meaning the bettongs face competition for shelter and food. The damage to their habitat puts them at further risk of predation by feral cats. Other threats include a lack of active fire management. Fischer says fire management regimes were essential for improving the structure of habitat and could help tackle problems such as lantana.

Since the surveys, a fence has been built to block cattle from entering the area the bettongs are known to occupy, and there has recently been a prescribed burn to enhance the habitat. “The next step is to muster the cattle out of the area and continue the ongoing fire and weed management strategies to improve the suitability of the northern bettong habitat,” says Richard Grogan, chair of the Western Yalanji Aboriginal Corporation.

A predator-free haven is being built at another location at the Mount Zero-Taravale Wildlife Sanctuary. This may be used in the future as a breeding site for animals translocated from the Lamb Range population. Animals could then later be released to try to build the genetic diversity of the Mount Carbine Tableland population.

“As specialist fungivores which eat and disperse truffles, northern bettongs play an essential role in maintaining the forest’s health,” Fischer says. “Losing them would not only be a tragedy in itself, it would also have ripple effects across the wider ecosystem.”

Lauded for her research on gentle giants of the sea, Andrea Marshall is using her fame to find hope for our troubled oceans.
caves

A wildlife ecologist specializing in large carnivores unfolds a mystery for listeners.
Video • Object of Intrigue