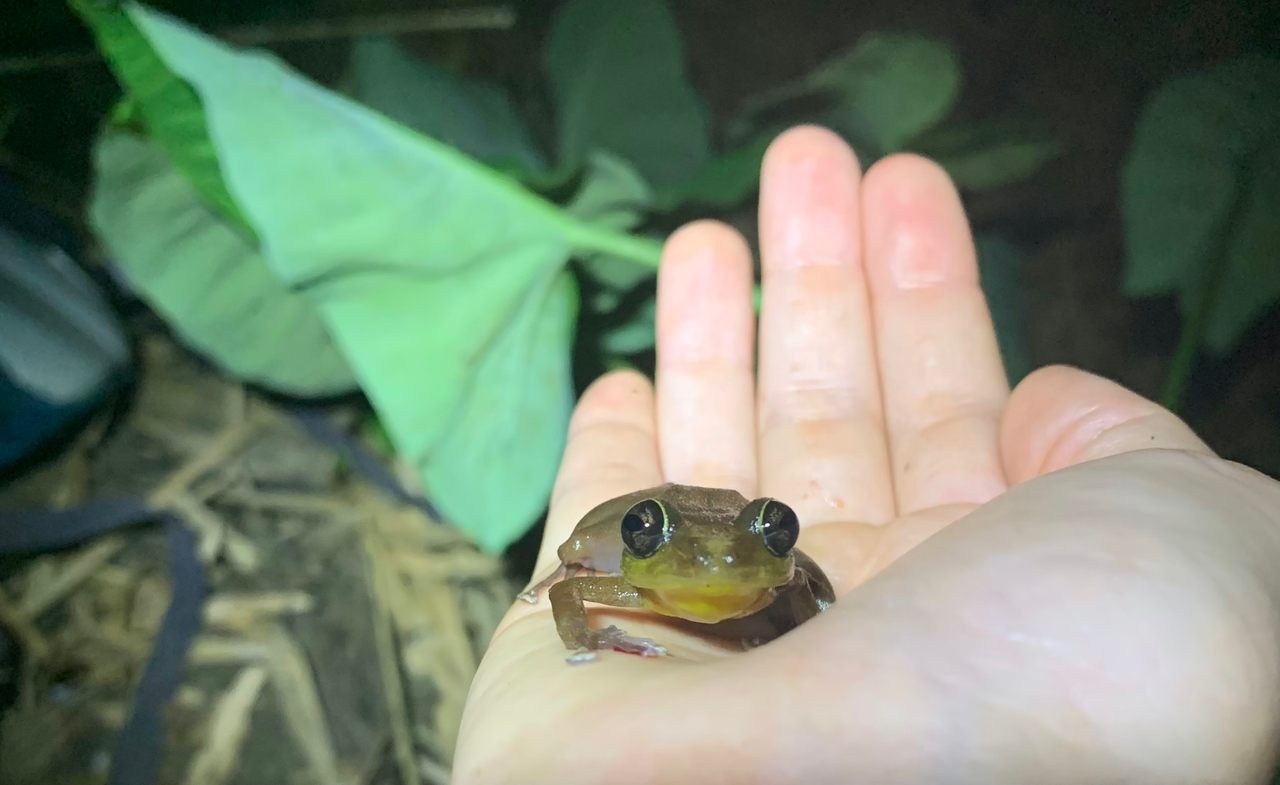 The diminutive Puerto Rican rock frog, or cave coquí, lives in the southeastern part of the island. Courtesy Samantha Shablin
In This Story
Destination Guide

The coquí frog’s insistent calls echo off the walls of the cave. University of Florida biologist Samantha Shablin clambers over the rocky floor in hot pursuit. She can’t see the frog yet, but she’s getting closer.

The frog calls again; the high-pitched, whistling notes might be mistaken for that of a bird. Finally, Shablin spots the animal. Switching her headlamp light to red to avoid spooking her quarry, she deftly scoops it into a plastic bag. Despite the impressive volume of its call, the frog is surprisingly small: only about two inches long, with a brownish back and a yellow underbelly. Its eyes are what really stand out.

“These cave frogs have huge eyes,” says Shablin. “They’re definitely adapted to seeing in those darker environments. I think they’re adorable because they have such big bug eyes.”

This Puerto Rican rock frog, also known as a cave coquí, or coquí guajón, is one of several species of coquí frogs. The coquís are native to the Caribbean island, although at least one species has become invasive in Hawaii after an accidental introduction. Here on Puerto Rico, some species are hugely abundant—the common coquí, found islandwide, has an estimated density of about 20,000 frogs per hectare, an area about the size of a baseball field. But other species, including the cave coquí, are much rarer and more difficult to study.

“We barely know anything about these frogs,” says Shablin. “They’re so cryptic. They hide really deep in these caves and tunnels, and it is a risk going into [their habitats]. You always have to be really, really careful when you’re going into caves, especially in the middle of Puerto Rico where almost every other day they get at least a small earthquake.”

While challenging to study, the frogs have endeared themselves to Shablin and her colleagues for more than just their big eyes. The species does not have a tadpole stage, and adult males are surprisingly dedicated fathers, guarding the eggs for weeks until they hatch into tiny frogs. Despite their lack of real teeth, claws, horns, or any other traditional form of animal weaponry, the males also engage in pitched battles to protect their homes from rivals. Shablin says a fellow frog researcher likened these fights to “two gummy bears sticking together and just rolling around.”

Now, Shablin is on a mission to find out more about these frogs before it’s too late. The coquí guajón is currently listed as endangered, with the population trending downward. Threats to the little frog include habitat loss, climate change, and pollution, but perhaps the biggest challenge to its survival—also the least understood—is disease. Chytrid fungus disease, or chytridiomycosis, which is responsible for the decline of hundreds of amphibian species worldwide, has also come for the coquís.

Shablin is halfway through a yearlong project to understand how the frogs’ movement through their environment contributes to the spread of this disease, as well as parasitic ticks that plague the animals. She is also studying how disease and the parasite burden may change the animals’ behaviors.

But before she could study these frogs, she had to figure out where they were: Puerto Rico’s recent spate of intense earthquakes and hurricanes may have affected where the frogs live.

“We’ve been going around to the different field sites, just doing this very preliminary check to see whether these frogs are even still there where they used to be, in their historic ranges,” says Shablin. With data collection help from a few other team members and her Ph.D. advisor, she tries to visit six or seven established sites on each quarterly trip, and to scout out potential new sites. At some of the established sites, previously ringing with the calls of the cave coquís, there has been only silence. “It was kind of heartbreaking,” she says.

But in other places, a chorus of frogs greeted her. At these sites, Shablin will catch a few frogs, swab their skin to determine if they have chytridiomycosis, and collect and count the number of ticks the frogs are carrying. (Even the ticks have their own share of mystery—pending planned DNA analysis, Shablin and colleagues think they may be a species new to science.) She’ll also tag each animal to identify them if they’re recaptured later.

Shablin also uses lidar, a laser-based method to measure distances and surface variation, to create 3D maps of the cave systems. Combining the maps with her data on individual frog movements, she hopes to understand how the fungus and the ticks are spreading through the frog population. One of the goals of her research is to determine the populations that are the most isolated from the threat of disease; this could help conservationists prioritize where to focus habitat preservation efforts, and also may, in the future, inform decisions to translocate populations, such as moving at-risk frogs to safer areas.

Karen Lips, a biology professor at the University of Maryland who is not involved in the project, says preserving amphibian biodiversity is important, and that many Puerto Rican frog species “are already special and endemic to begin with.” Because the coquí guajón only lives in caves, adds Lips, “It’s not like it has a lot of opportunities to move or go anywhere else.”

Frog conservation research has important benefits for humans as well, Lips says. “One thing we know about frogs, and amphibians in general, is that they eat bugs,” she says. Insects on frog menus include biting mosquitoes that, in Puerto Rico and other areas, can spread Zika, malaria, and other diseases. “Frogs that eat the insects will potentially have some level of control over those diseases that affect humans,” Lips adds.

Shablin notes the importance of working with landowners on the conservation of these frogs—many of the field sites are on private property. Protecting cave coquí habitats is personal for her as well: Shablin’s family is from southeastern Puerto Rico, where these frogs live. She was surprised to learn that her aunt and uncle, who still live on the family property, were very familiar with the distinctive call of the coquí guajón; they said they heard it all the time. Sure enough, when Shablin visited, she found the very frogs she’s studying.

“I at least know that I can do something about protecting that specific habitat, because that’s my family’s property,” she says, delighted by the discovery. “I can make sure that it stays safe for the frogs.”

A wildlife ecologist specializing in large carnivores unfolds a mystery for listeners.
islands

Scientists, residents, and visitors have banded together for a massive biodiversity survey of British Columbia's Galiano Island.
islands