To Work Out Like a Knight, Try Donning Armor and Extolling Virtue - Atlas Obscura
Want to see fewer ads? Become a Member. 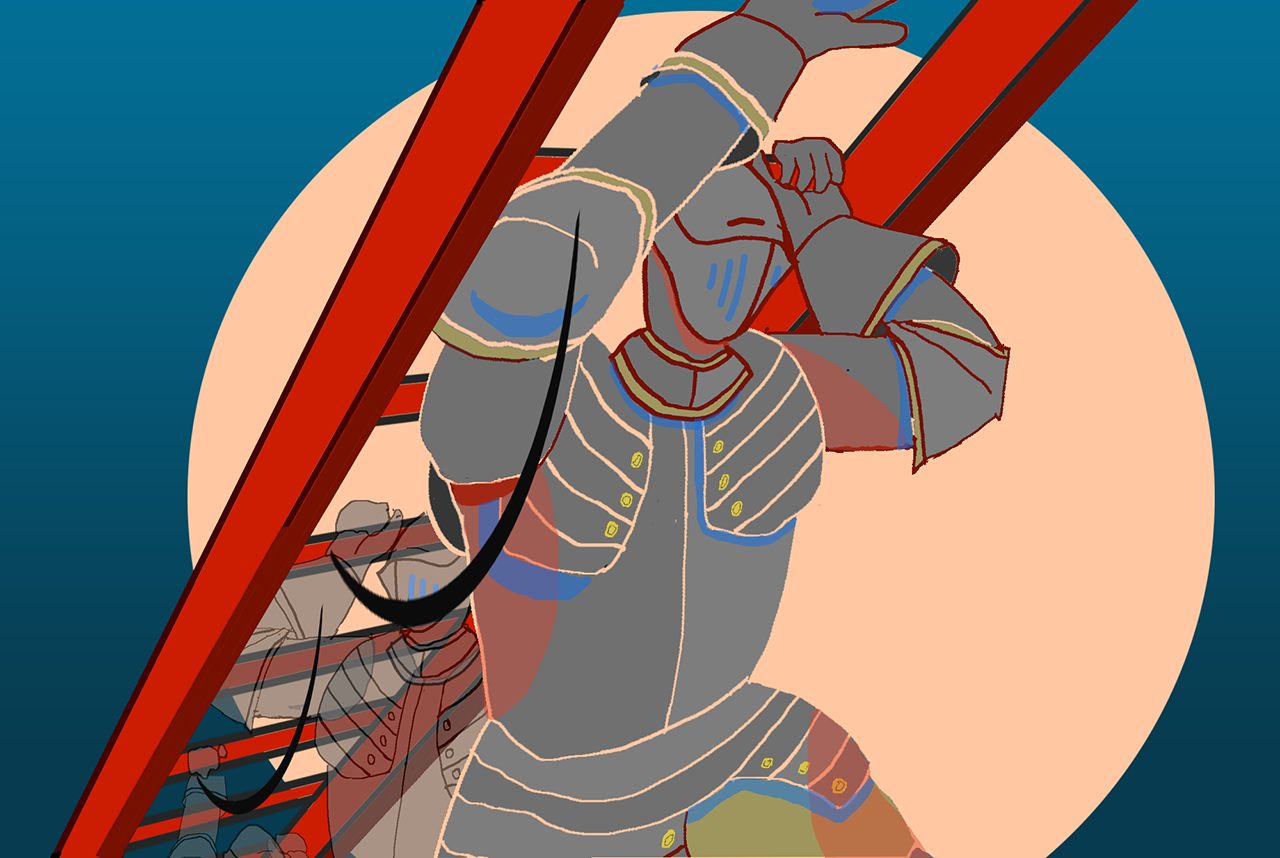 The metal-clad men of the Middle Ages would scale ladders, among other exercises, to stay fit. Tobes Studio for Atlas Obscura

If you were trying to get ahead in 15th-century France, being a renowned warrior was a pretty good way to do it. Not only was there the fame and prestige of being a storied fighter; there was also the repute that came with following a chivalric code, and conducting oneself gallantly.

It’s hard to say whether fighting or manners are more difficult to master, but the former certainly leaves its subject more breathless. And since breathlessness is a goal of strenuous exercise, it’s worth revisiting what knights did to get fit in the Middle Ages.

Though we’re no longer contained in metal suits, we are confined to our homes. And while both are constraining, suits of armor—contrary to popular perception—actually offered a full range of motion.

That’s not the only fact worth setting straight when it comes to knightly vigor (and vim!). There’s also the longstanding myth that knights had to be hoisted onto their horses by medieval cranes, due to the weight of their armor. In actuality, any swordfighter worth their salt could vault themselves onto a horse’s back solo, without so much as a squire to help.

Most movies set in medieval times aren’t very helpful when it comes to understanding a real knight’s regimen. Better, then, to delve into some of the documents of the day. In the High Middle Ages, few books dominated the cultural consciousness as much as Secreta Secretorum, or “Secret of Secrets” (clearly either a poorly kept one or a shrewd bit of medieval marketing). A pseudo-Aristotelian manuscript, Secreta Secretorum explores a range of topics relevant to the medieval state, knighthood chief among them, according to Steven Bruso, a professor at Endicott College who specializes in late medieval English literature and culture.*

Using the Galenic concept of humors as a foundation for its espousals on knightly health, Bruso’s translation of the manuscript* describes how a knightly body’s “thiknesse of the sholdres and of the bak, with a brode brest, shewith worthynesse … [and] hardynesse.”

For knights like Boucicaut—a famed French military leader whose real name was Jean II Le Maingre—fitness was a means to an end: having a body that was honed for war. Boucicaut traveled from Prussia to the Ottoman Empire, fighting in conflicts that helped define the map of medieval Europe. And he couldn’t have done so without a stringent, self-imposed exercise circuit, ideal for someone traipsing around in a clattering metal outfit.

His routine is repeatable today—if you have a spare suit of armor. The fit French fighter insisted on doing his exercises—vaulting onto a horse, performing somersaults, climbing walls, and running long distances—while wearing what he would wear in combat.

To practice using his weapons, he employed an extra-heavy arsenal—not unlike the way a baseball batter uses a weighted ring (called a doughnut) before stepping up to the plate. In both cases, the idea is to make swinging the real thing—a sword or a bat—a lighter, faster experience.

Boucicaut’s most astonishing fitness feat, though, was scaling a ladder while clad in his 60-pound suit of armor, taking each rung with both hands at the same time, without his feet to support him.

This may all sound pretty esoteric. But with the exception of the horse, it’s not too hard to dig up the tools you would need to get in some knightly exercise at home. A weight belt, for example, is a modern analog to armor. And ladders, of course, have never gone out of style.

The true test, though, is your endurance. But at this point you’ve made it through at least a couple of months of global tumult (and this story). Perhaps it’s worth some more pain for future gain.

*Update 6/8: This story was updated to clarify the sourcing of information cited.

Support Us
Keep Exploring
how to

To Work Out Like an Amazon, Limber Up and Find a Horse

The fearsome fighters of Greek mythology have a very real, very fit regimen to share.
medieval

Expressing your identity in a clever string of images was a thing long before emojis.
women

Who Were the Warrior Women of Dahomey?

The only documented all-female army in history inspired the Dora Milaje.
Video