Meet the Man at the Controls of the World’s Largest Steam Locomotive - Atlas Obscura
Want to see fewer ads? Become a Member. 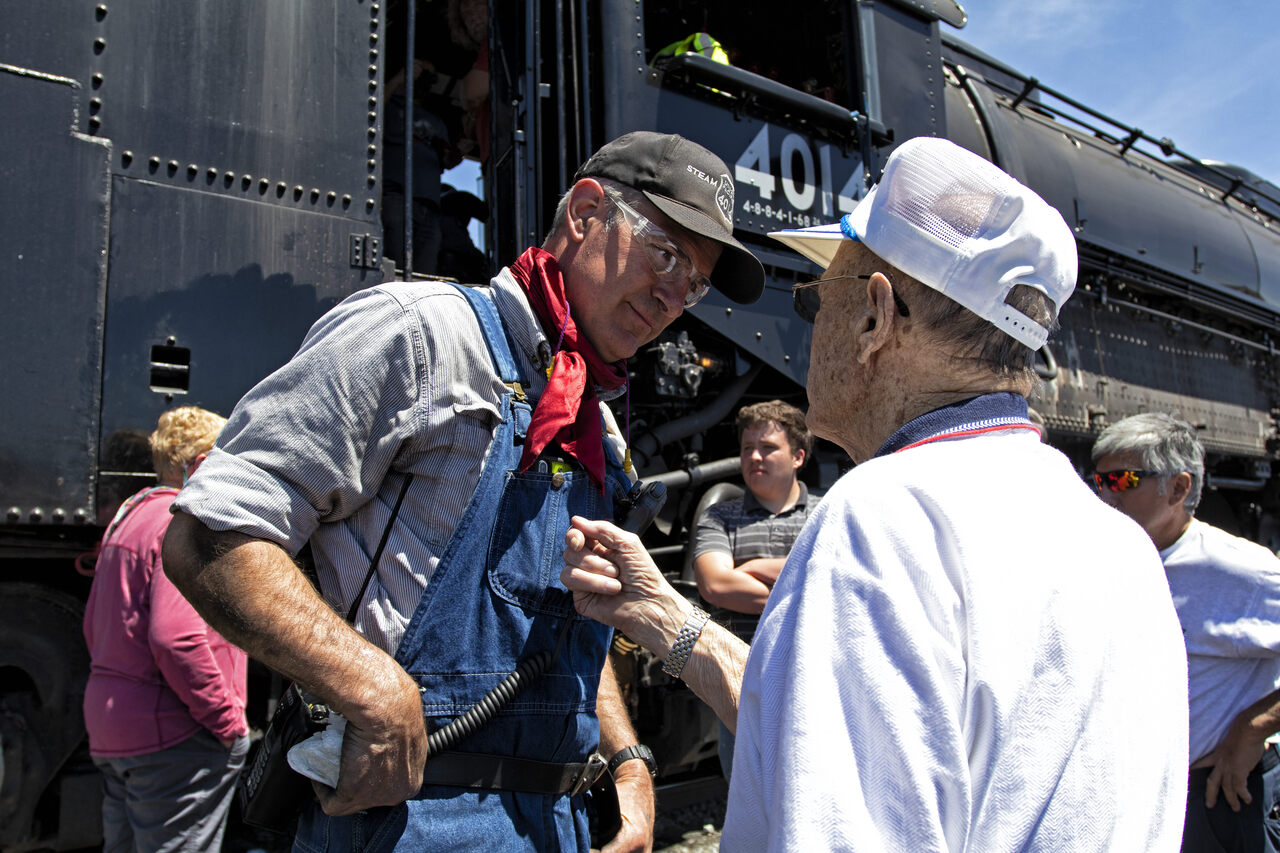 Ed Dickens (left) speaks with Merrill Transtrum (right), who drove the Big Boy in the 1940s and 1950s. Justin Franz
In This Story
Place

There’s no doubt about it. Ed Dickens is a rockstar. Dickens is a steam locomotive engineer and mechanic who maintains the Union Pacific Railroad’s historic steam and diesel fleet, which now includes the world’s largest steam locomotive, known to train buffs around the world as “Big Boy.” And everywhere that Dickens goes—and he’s going all over—train fans let him hear it.

In spring 2019, Big Boy No. 4014 ran for the first time in 60 years following a multiyear restoration. Since then, it has toured the country—to Utah in May for the 150th anniversary of the First Transcontinental Railroad and across the Midwest over the summer. Now Dickens and his team are preparing for the Big Boy’s biggest journey yet: A two-month tour through 12 states, from the locomotive’s home base in Wyoming to Utah, Nevada, California, Arizona, New Mexico, Texas, Arkansas, Oklahoma, Kansas, Missouri, and Colorado. The public will even be given the rare opportunity to ride behind it in Los Angeles on October 12 and 13.

Enormous crowds have greeted the locomotive wherever it goes, and given Dickens a hero’s welcome when he climbs down from the cab, signing autographs and posing for selfies with excited fans who traveled from around the world to see Big Boy. For a boy who grew up loving trains, just like many who come to cheer him on, it’s a dream come true. “My entire life has been surrounded by railroads,” he says.

Dickens grew up in Colorado and remembers riding his bike down to the Denver and Rio Grande Western tracks so he and his friends could watch the trains go by. Sometimes they spent hours waiting for one to come along. In the 1980s, Dickens served in the military, and then began working at some historic railroads in Colorado, including the famous Durango & Silverton Narrow Gauge Railroad, which has run continuously since the 1880s.

It was at the Durango & Silverton and the Georgetown Loop Railroad that Dickens learned from veteran mechanics the many skills required to restore old steam locomotives. Many railroad companies replaced steam with diesel in the 1940s and 1950s, and Dickens is one of a shrinking number of people with the knowledge needed to maintain them now. “Working with those older guys really cemented my passion for steam locomotives,” he says.

Dickens has always loved tinkering, and it’s in his nature to dive into complicated projects. In many ways, repairing old steam locomotives—machines that can weigh hundreds of tons and have thousands of parts—was the perfect job. But it wasn’t exactly steady work. Most steam locomotives are only used on seasonal excursions. Looking for more full-time employment, Dickens hooked on with a freight railroad in 1993. The company was eventually acquired by Union Pacific, one of the largest freight railroads in the country—and one that likes to celebrate its history.

Union Pacific decided in 1960 to keep the last steam locomotive it purchased, No. 844. Known as “The Living Legend,” it was built in 1944 to move high-speed passenger trains, and was capable of running at 100 miles per hour. The company rolled it out for special events. It was joined by another vintage steam locomotive, “Challenger,” in the 1980s. The locomotives are maintained by a small crew in an old shop building in Cheyenne, Wyoming. Dickens started working there in 2004 and became its manager in 2010.

In 2012, Dickens was summoned to Union Pacific headquarters in Omaha, Nebraska, to talk about a new project: restoring one of history’s largest steam locomotives.

In 1940, as the United States prepared to enter World War II, freight traffic on America’s railroads was booming and the Union Pacific needed more powerful locomotives to move trains over the Rocky Mountains in Utah and Wyoming. Their mechanical engineers teamed up with the American Locomotive Company to design a brand new type of steam locomotive: a 4-8-8-4, with four wheels in the front, two sets of eight driving wheels in the middle (the large ones connected to the pistons that make the locomotive move), and four trailing wheels, all under a single boiler. They weighed more than a million pounds and were 132 feet, 9 inches long.

Union Pacific purchased 25 of the 4-8-8-4 types between 1941 and 1944. The locomotives were originally to be named “Wasatch,” after the mountains they were built to carry freight over, but in 1941, a nameless American Locomotive Company worker wrote “Big Boy” in chalk on the front of one. The name stuck.

The Union Pacific used Big Boys until 1959, when they were replaced with diesel-electric locomotives. Most were scrapped, but eight were put on display around the country.

For years, railroad enthusiasts thought they would never see a Big Boy run again. Much of the infrastructure needed to maintain them was scrapped in the 1950s, and few rail lines could even handle such a massive machine. But Dickens says he never believed the naysayers.

When Union Pacific executives asked him what he thought of restoring a Big Boy, he said he was ready. Dickens began to search for a suitable candidate. He considered several, but No. 4014, which had been on display at the Rail Giants Museum in Pomona, California, since the 1960s, appeared to be in the best condition. Union Pacific and the museum made a deal: a modern diesel locomotive and a caboose for No. 4014. In 2014, it was hauled off to Wyoming.

In Union Pacific’s shop, Dickens and his team of mechanics began the monumental task of taking the whole thing apart—cleaning and repairing each and every element. Some parts even had to be fabricated right there in the shop. By early 2019, most of the locomotive was complete and it was announced that Big Boy No. 4014 would run to Ogden, Utah, to celebrate the 150th anniversary of the driving of the Golden Spike that first connected America’s coasts by rail. But while the departure date was set, the locomotive wasn’t. Dickens and his team raced to complete it on time—working seven days a week. Some observers thought it wouldn’t happen. Not Dickens, though.

“I had no doubt that we would finish the locomotive in time,” he says. “I had to believe that. There was no way I was going to give up.”

On May 2, the locomotive made its first run out of the shop. The test was unannounced, but word spread quickly on social media and hundreds of enthusiasts came out to see it. After a few adjustments, No. 4014 left two days later for its first journey in six decades. Along the way, thousands of people came out to get a peek at 600 tons of steel and steam roaring by. Dickens says the crowds have been almost as impressive as the locomotive itself. “Seeing all those people come out to see this locomotive made all of the hard work worth it,” he says.

Because of Big Boy’s size—it’s twice as big as a modern diesel locomotive—planning any trip with it takes months of preparation. Dickens’ team has to review the clearances of every inch of track the locomotive will run on to make sure that overhead bridges are not too low and curves are not too tight. With that in mind, Dickens says the locomotive can run on most of the Union Pacific’s 32,000 miles of track, and he expects it to visit much of the system in the coming years.

So what is it like to run the world’s largest steam locomotive? Dickens says that for a locomotive that can quite literally shake the earth when it rolls by, Big Boy No. 4014 is surprisingly smooth riding, in part because of its titanic weight. “It’s huge, it’s an absolute monster,” he says.

Railroad historian John E. Bush has written numerous books about Union Pacific’s steam locomotives and says there has never been a more comprehensive steam locomotive restoration than the one Dickens and his team completed earlier this year. Nor has there been a locomotive quite as beloved as Big Boy. “It brings smiles to everyone,” he says.

Dickens says while running the world’s largest steam locomotive is fun, the joy in the crowds might just be a little bit better. “I’ve heard people say it thousands of times so far: ‘I never thought I’d see a Big Boy run!’” he says. “But now there’s one alive and it’s right in front of them.”

Vintage rail cars hide in plain sight on the Isle of Wight.
railroads

Meet the Most Passionate Admirers of India’s Rail Network

All aboard!
communist architecture

The Buzludzha Memorial House has a polarizing history and an uncertain future.
Video

For 40 Years, Crashing Trains Was One of America’s Favorite Pastimes

From 1896 until the 1930s, showmen would travel the country staging wrecks at state fairs.
Read more
Thanks for sharing!