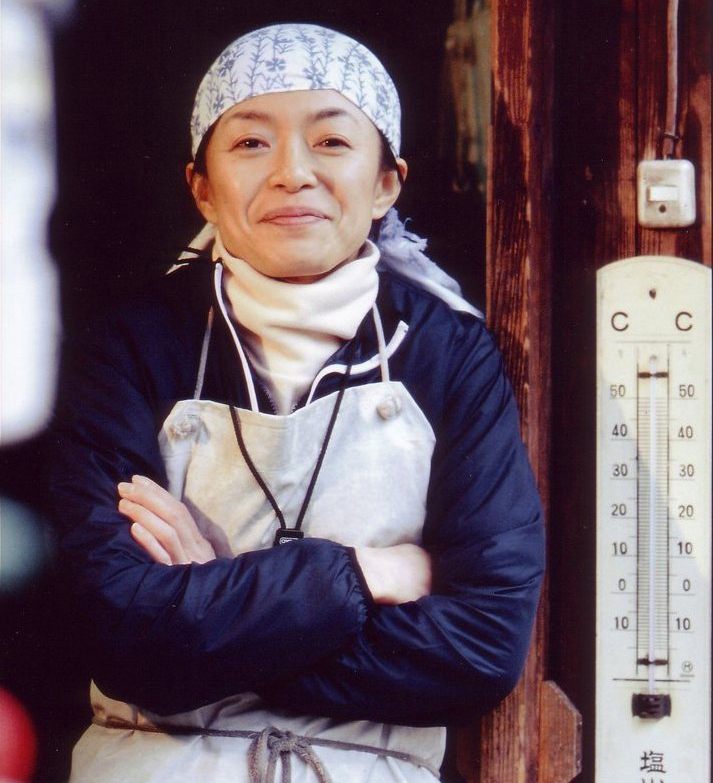 Master brewer Miho Imada has looked back to history to brew a novel sake. Courtesy of Monica Samuels
In This Story
Destination Guide

Every year for decades, scientists at the Hiroshima Prefectural Agriculture Gene Bank have planted a small patch of hattanso rice. Its stalks are spring-green and spindly, its grains stubby, with a white core of endosperm visible in light. Hiroshima’s rice fields are fecund with Hattanso’s descendants, which farmers sell to sake brewers in dozens of prefectures across Japan. Hattan no. 35, which crop scientists bred in 1962, has hard grains that can withstand the polishing required for high-quality sakes. Hattan-nishiki no. 1 and 2, bred in 1984 from a cross between Hattanso and Nishiki rices, has medium-sized grains yield light sakes with an earthy tang.

Outside of the Agricultural Research Station, however, one variety of rice is conspicuously missing: hattanso itself. The cultivar hasn’t been used in sake production for decades. “Hattanso is very tall and hard to grow,” says Miho Imada, the toji, or master brewer, at the Imada Shuzo Kura, a fifth-generation sake brewery located in Akitsu, Hiroshima. “So everyone stopped growing it.” Imada spoke with Gastro Obscura via email through translator and sake expert John Gauntner, with assistance from Monica Samuels of U.S. importer Vine Connections.

Today, none of Japan’s sake producers use the heirloom rice—except Imada herself. For two decades, as part of her quest to craft a sake that reflects Hiroshima’s distinct climate and agricultural heritage, or terroir, she’s been single-handedly reviving the heritage strain. “I was the only one who revived it, and even today I remain the only one who uses this rice in sake,” she says. The revival has required Imada to retrace Hiroshima’s sake history. She’s worked with local farmers to cultivate a seed they haven’t sowed in a century, and used trial and error to rediscover the perfect brewing process for a once-common, now-forgotten rice, whose folk roots make it less predictable than standardized modern cultivars.

According to sake experts, the result has been more than worth it. “It reminded me of everything that I had seen that day,” wrote Maiko Kyogoku, owner of New York’s Bessou, upon trying Imada’s hattanso-based Fukuchou Hattansou sake during a visit to the Imada kura. “The steady sparkle of the sea, the slow deliberate note of the shakuhachi, and most of all, the sake maker herself—brisk and full of grace.”

Hattanso’s rise, fall, and eventual resurrection began in Daiwa, Hiroshima Prefecture, in 1875. Two years before, the Prefecture had founded its first Agricultural Research Station. Officials were eager to document, collect, and research local agricultural specimens, part of a project of agricultural modernization that accompanied the Meiji Restoration. They had a stunning variety of cultivars to choose from: By 1894, the Research Station had already collected 500 varieties of rice, which were developed over the approximately 3,000 years that Japanese farmers have cultivated the staple crop. They were highly diverse, having been saved every year and passed down for generations.

Hattanso was the preferred local sake-brewing rice, as its large white core allowed for water absorption, which is key to the brewing process. But like many heritage cultivars, hattanso was hard to standardize. Farmers found its long stalks unwieldy, and its grains frequently broke during the brewing process, leading to uneven-quality sake. With the advent of modern plant breeding, agricultural researchers saw an opportunity to develop more standard sake-rice cultivars. Starting in 1907, they experimented with the rice, looking to breed varieties with shorter, easier-to-grow stalks and larger white cores that would be simpler to brew. By the 1980s, researchers had developed dozens of new sake-rice strains, most popular among them Hattan no. 5 and Hattan-nishiki no. 1 and 2.

But Hiroshima’s sake-loving scientists were victims of their own success. They started with hundreds of varieties of rice, each developed by farmers over generations. By 1995, however, around the time Imada started brewing, the Hiroshima government was recommending a roster of only 11 rice cultivars for local farmers. Many of these cultivars, such as the Hattan-nishiki crosses, were also bred for export to sake-producing regions around the country, leading to what heritage producers like Imada felt was a standardization in sake flavor.

In the early 2000s, a lucky accident introduced terroir back into Imada’s brewing. “One year, the seed bank had a good harvest and were left with a lot of [hattanso] seeds, more than they needed,” says Imada. “So they asked the brewers in Hiroshima if anyone wanted to try to grow it and make sake from it. I said yes.”

That willingness to try something new was typical of Imada, who had never intended to become a master brewer. She originally trained as a Noh traditional-theater artist, and was working in Tokyo in 1993 when her father asked her to return home to continue the family business. The kura had been producing small batches of highly regarded sake since 1868, even before the local government began developing modern rice strains. Imada brought new energy to an old family tradition. In 2000, she became the brewery’s first female toji, making the Imada kura one of only 50 headed by women out of Japan’s 1,500 or so kuras. She’s part of a recent rise in the number of women taking ownership of sake breweries, which were run by women in ancient times but have been male-dominated since the modern period.

Ask Imada about gender, however, and she quickly turns the conversation back to what she’s most passionate about: Hiroshima’s regional flavors. “It may be that there are very few female brewers in Japan. It’s honestly not something I think about very often,” she told Atlas Obscura. “The inspiration to make sake comes from a desire to make sake that reflects my region.”

The Hiroshima seed bank’s accidental abundance of hattanso helped Imada do just that. She turned to a local farmer, an elderly man with land near her brewery in Akitsu. No one had attempted to cultivate hattanso at this scale for decades, and the rice’s large stalks proved to be just as unwieldy as those long-ago researchers had determined. The rice also seemed to require higher altitudes to truly thrive. So Imada enlisted the help of three more farmers who grew at greater elevation. It took several more years for the farmers to grow enough rice for Imada to begin brewing. By 2006, she had started brewing Hiroshima’s first known hattanso sakes in decades.

Imada has made hattanso sake every year since. It took several years for her to determine the best way to brew with the rice. To make sake, brewers first wash and soak the milled rice, then steam it, sprinkle it with mold powder, mix some of the moldy rice with yeast, and then combine that starter, more steamed rice, and water into a sludge. The resulting mash is fermented, pressed, and filtered. A rice’s individual grain structure determines the exact timing for each of these steps, and tojis must constantly adjust the process to suit individual harvests and new cultivars.

An experienced sake sommelier can taste idiosyncrasies in the brewing process, such as whether a rice was over- or under-soaked. John Gauntner, a sake expert and Imada’s translator for this article, sensed hesitance in Imada’s initial hattanso batches, made with those early, more experimental harvests. “In my experience, often (but not always!) it takes a decade for a new rice to come into its own,” Gauntner wrote in his review of an early batch. “The first few years I tasted Fukucho made with Hattan-so, I found it just that way: astringent and tighter than most of her sake.”

Today, Imada’s is still the only kura working with hattanso. Her decade of effort to revive the heritage strain is reflected in her more recent brews. After a few years, Gauntner noted that Imada’s hattanso sakes had come to embody the flavors connoisseurs expect from her brewery: smooth, round, deep, and as gentle as the climate of Hiroshima. Indeed, this story of a Hiroshima treasure lost and then found again is reflected in Imada’s favorite hattanso sake, a junmai-shu sake, which is made without adding brewers’ alcohol, and which Imada says pairs best with “wild green vegetables” as earthy as heirloom rice. The sake’s name: Forgotten Fortune.

Chiune Sugihara was "Righteous Among the Nations."
deserts

In the Arizona desert, Atsuo Sakurai found the freedom to make something great.
beer

Beer, sake, and a certain flowery wine had their start as women's work.
art

Guorui Chen brought a hometown tradition back from extinction.
Video