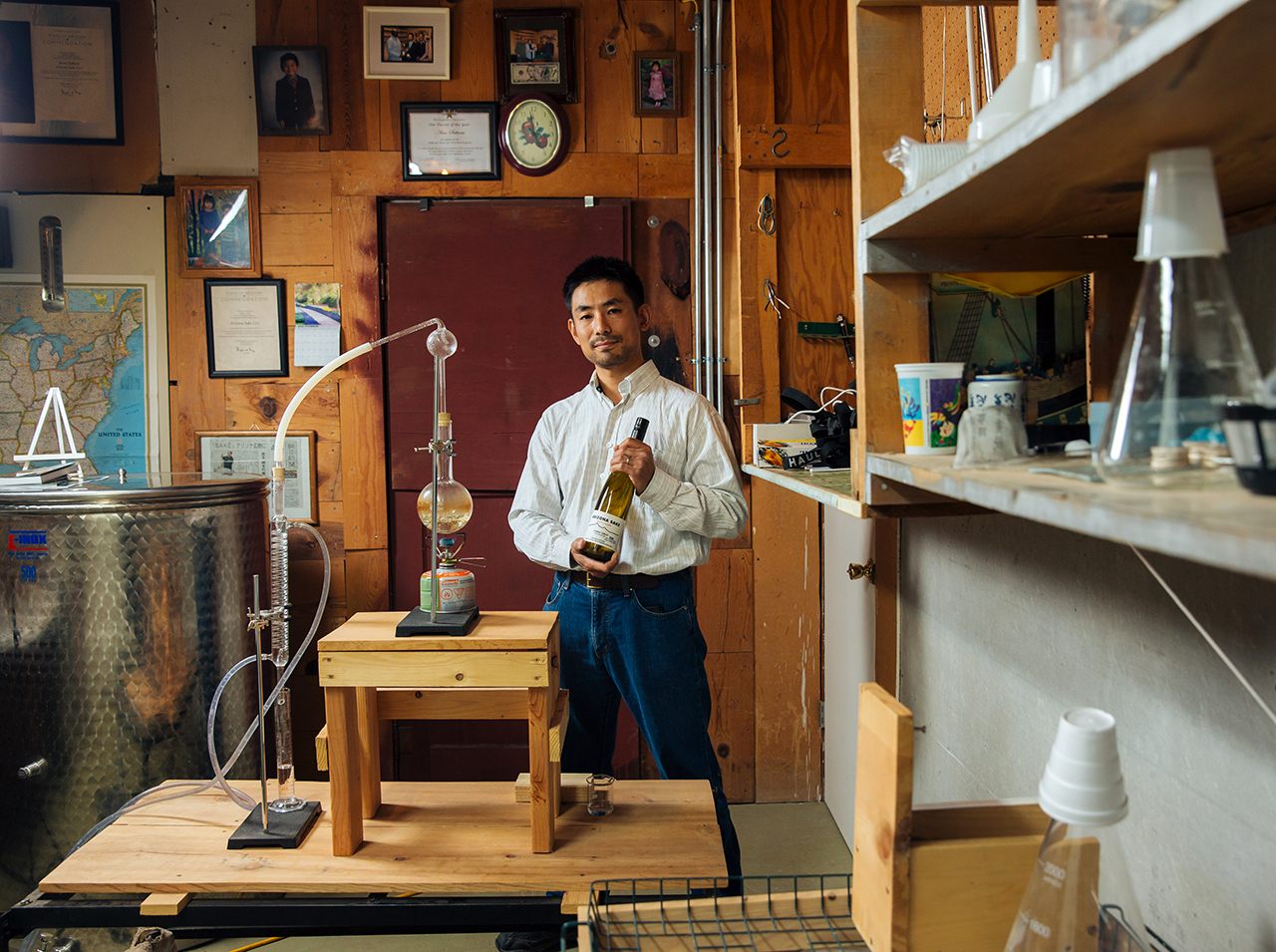 One man handcrafts "the best sake made outside of Japan" in a tiny desert town on Route 66.
Destination Guide

Only 5,049 people live in Holbrook, Arizona, and one of them, Atsuo Sakurai, reputedly makes the best sake brewed anywhere outside of Japan. That a tiny, quirky, high-desert town could be home to a world-class sake brewery is as unlikely as it is wonderful. I need to see for myself.

The road into town was once part of the iconic Route 66, a highway that stretched from Chicago to Los Angeles and figures large in American folk history. But by 1984, Route 66 had been bypassed by an interstate highway, which crippled the economies of many towns, Holbrook included, that were once sustained by travelers. Today, the main road is lined with relics of that era: abandoned gas stations, the kitschy Wigwam Motel, and a ragged row of shops trading in rocks and “Indian art.” Brightly painted dinosaurs—fitting for a town on the edge of Petrified Forest National Park, where fossils from the Late Triassic have been found—are clustered in front of the rambling and literally named Rock Shop.

I’ve arranged to meet Sakurai at Holbrook’s annual Old West Fest, where he has a booth. The festival is housed on the lawn of the historic courthouse, now a history museum. There is a sparse crowd, food vendors, crafts for sale, games, even a pie-eating contest. A historical-reenactors troupe has set up a “saloon” on the lawn. Next to them is the beer booth. Next to that, under a small EZ-Up canopy, is Arizona Sake. It is marked by a hand-painted wooden sign and manned by a slight, dark-haired man with a mustache and scraggly beard: Sakurai. Wearing the requisite western wear—jeans, plaid shirt, cowboy hat, and bandana—he is selling a steady stream of customers $5 tastes of Arizona Sake.

A couple walk past; each holds a plate of barbecue and a bottle of beer. “Would you look at that,” the woman says, nudging the man. “Sake. Isn’t that from Japan? Let’s try it!”

Nothing in Holbrook’s history suggests it would produce great sake. In 1881, the railroad came through and cowboys, many of them reportedly on the run from the law, moved in and founded the town. In 1886, a staggering 26 Holbrookians were reportedly shot to death—from a total population of about 250. One notorious gunfight at Terrill’s Cottage Saloon—perhaps started over a disputed poker game, perhaps the result of a cowboy rivalry—left the floor awash in blood and gave it a new name: Bucket of Blood Saloon. You can still see the shuttered building in town.

Sakurai’s interest in sake began in his college dorm room. Drinking with friends, he became curious about the process that transforms rice and water into social lubricant, and eventually got a job in a sake factory. It took a decade for him to master every step of the process. After passing a rigorous government exam, he was awarded the title of Certified First-Grade Sake Brewer, the highest designation.

Despite his success, something was missing. Sakurai wanted independence, to open his own business. But in Japan, he says, his dream was impossible because the government doesn’t issue new sake licenses anymore. “That means for me there was no chance,” he says with a shrug.

Four years ago, Sakurai was working as a tour guide at a sake factory in Yokohama, Japan, when a young American woman named Heather took his tour. Heather, who is Navajo and from Holbrook, was working in Japan as an English teacher.

They fell in love, married, and started a family. But Heather missed her family and the wide Arizona sky. So they left Japan and moved to Holbrook.

The town has moved past its lawless days, but for Sakurai, the move freed him from the government regulation that kept him from brewing on his own. In a corner of his two-car garage, he started making small batches of sake, fermenting the brew in a silver vat squeezed in next to his Ford pickup truck.

In 2018, Sakurai entered Arizona Sake in the Tokyo Sake Competition and won the gold medal for the best sake made outside of Japan. Earlier this year, he won another gold medal at the Los Angeles International Wine Competition.

Paul Ortega, who owns West End Liquor, a store with a drive-thru and a hand-lettered sign that advertises “Ice” and “Coldest Beer in Town,” was one of his first customers. Thanks to Sakurai, Ortega’s store has become an international destination.

Why is this sake so good? According to Sakurai, it’s elemental.

Water: Holbrook’s excellent water is pulled from an aquifer under the Little Colorado River Basin.

Fire: Sakurai’s all-consuming intensity for his craft means he is constantly brewing.

As Sakurai pours me a taste of Arizona Sake at his Old West Fest booth, a shot rings out. We both jump. Kids playing on the lawn run toward the historical reenactors to watch the show. More shots crack the air. “My sake, it’s super fresh,” he says. “Each batch is very small.”

I’m not entirely sure what terroir means. Nor do I speak the language of notes, bouquet, and finish. But my first impression is: fresh. Sakurai serves his sake chilled, and although I’m expecting something heavy and sweet, it is light, crisp, and far more than the sum of its two mundane parts. I taste neither rice nor water. I taste dry desert sunshine—the sunshine of early morning, when the light washes soft across the silvery sage and the sky is just beginning to cycle through its anthology of blues.

I am self-conscious about my reaction, peering around as if someone can see my flight of fancy. But all eyes are on the mock carnage in the mock saloon, so I take another sip. I buy two bottles and make plans to meet Sakurai for a tour of his factory in the morning.

Sakurai recently moved his business out of his garage and into a new, bunker-style building on a dusty acre between a Super 8 Motel and Dollar General store. But Arizona Sake remains a one-man show. Sakurai does it all, from the mixing to the delivery. He checks each batch to ensure an alcohol content of 15 to 17 percent. He sells to stores, restaurants, and individuals in Arizona, New York, Hawaiʻi, and California. He considers the relationships he forms with customers and collaborators the core of his business. He envisions Holbrook as the center of a web of friendships, its strings made of sake.

“I just want to make people happy with my sake,” he says.

For Sakurai, a move across the globe opened a world of possibilities. “Thanks to Holbrook and Arizona,” he says, adjusting his Route 66 ballcap. “Because I didn’t have a chance in my home country, I’m happy to be in Holbrook.”

My curiosity and thirst sated, I tuck my sake into a cooler and head home, past the crumbling remains of the Bucket of Blood Saloon, past the courthouse, past the dinosaurs, thinking about serendipity, the taste of sunshine, and unlikely pairings.

Found: The Charred Remains of a 170,000-Year-Old Meal in a South African Cave

Chiune Sugihara was "Righteous Among the Nations."
alcohol

Beer, sake, and a certain flowery wine had their start as women's work.
collections

Join us for a daily celebration of the world’s most wondrous, unexpected, even strange places.
More Food & Drink
Holbrook, Arizona

One man handcrafts "the best sake made outside of Japan" in a tiny desert town on Route 66.
Condom, France