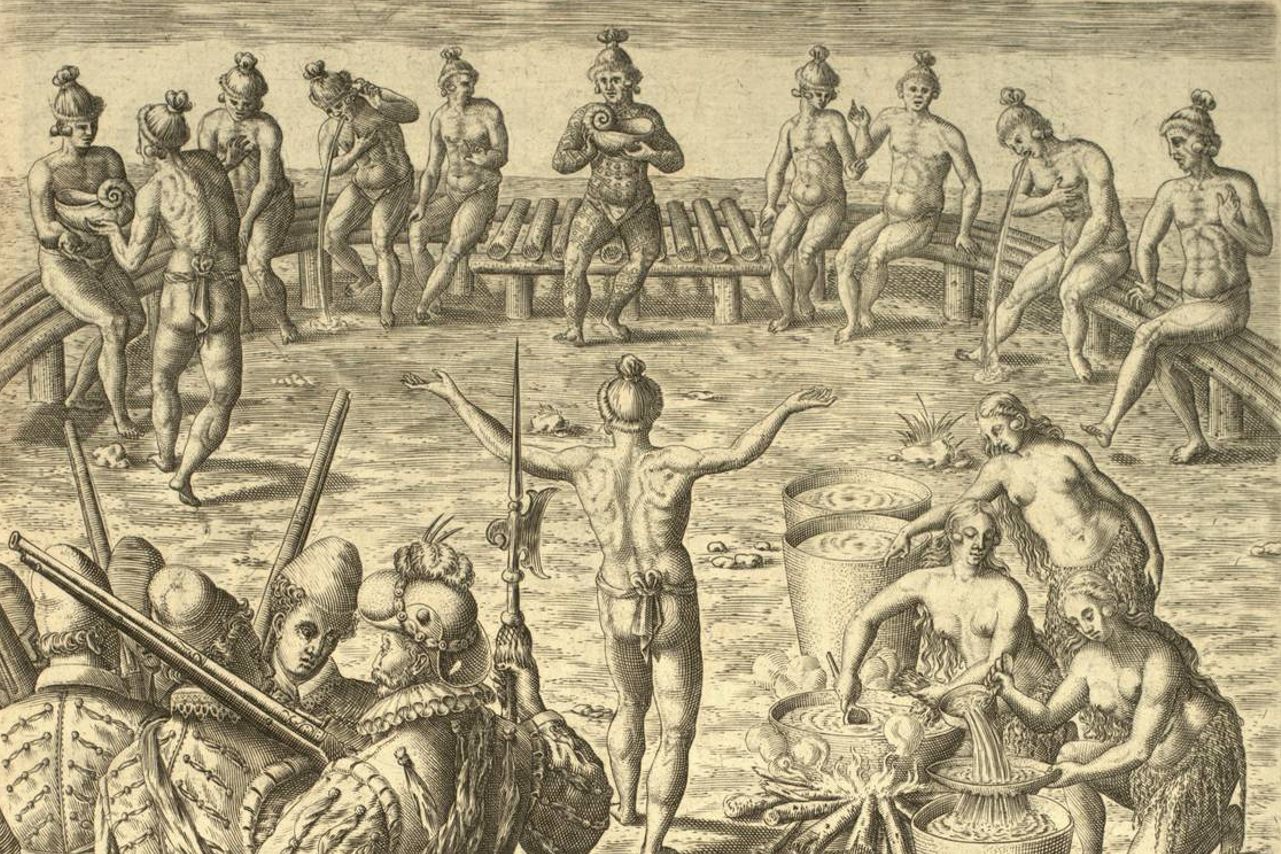 At a council, the chief sits at the place of honor surrounded by his advisors. Cassina is prepared by women in the foreground. University of South Florida Libraries Special Collections/ Public Domain
In This Story
Food

The mellow-buzz brew that once fueled Native Americans is making a comeback.
Destination Guide

Every morning, every day, 85 percent of Americans alter their state of consciousness with a potent psychoactive drug: caffeine. Their most common source is the roasted seeds of several species of African shrubs in the genus Coffea (coffee), while other Americans use the dried leaves of a species of Camellia plant from China (tea).

Americans love caffeine, but few realize just how ancient the North American craving for caffeine truly is. North Americans have been enthusiastically quaffing caffeinated beverages since before the Boston Tea Party, before the English founded Jamestown, and before Columbus landed in the Americas. That is to say: North Americans discovered caffeine long before Europeans “discovered” North America.

Cassina, or black drink, the caffeinated beverage of choice for indigenous North Americans, was brewed from a species of holly native to coastal areas from the Tidewater region of Virginia to the Gulf Coast of Texas. It was a valuable pre-Columbian commodity and widely traded. Recent analyses of residue left in shell cups from Cahokia, the monumental pre-Columbian city just outside modern-day St. Louis and far outside of cassina’s native range, indicate that it was being drunk there. The Spanish, French, and English all documented American Indians drinking cassina throughout the American South, and some early colonists drank it on a daily basis. They even exported it to Europe.

As tea made from a species of caffeinated holly, cassina may sound unusual. But it has a familiar botanical cousin in yerba maté, a caffeine-bearing holly species from South America whose traditional use, preparation, and flavor is similar. The primary difference between cassina and maté is that while maté weathered the storm of European conquest, cassina has fallen into obscurity.

Today it’s better known as yaupon, and it’s mostly planted as an ornamental throughout the southeastern United States. Recent years have seen a handful of small-scale growers selling and promoting cassina for consumption, typically under the name yaupon tea. Cafes in a few scattered Southern locales are selling it and pushing for a revival.

This is not the first call for a reappraisal. For over a century, botanists, historians, and even the U.S. Department of Agriculture have periodically drawn attention to the absurdity of cassina’s disuse in its native land.

So why was a plant of such well documented potential, which seemingly should have developed into a domestic alternative to expensive tea and coffee imports, ignored for so long? What happened to cassina?

Over the years, cassina has gone by many names. But just one gave the tea a permanent black eye that diminished its commercial prospects for centuries.

The first Spanish colonists in Florida who, according to one contemporary account, drank cassina “every day in the morning or evening,” knew it as té del indio or “cacina.” The English in North Carolina called it yaupon, a term borrowed from the Catawba language that is still the most common name for the plant itself. In South Carolina, “cassina” was the usual appellation, possibly derived from the long extinct Timucuan language. And colonists throughout the English-speaking colonies often settled simply for “black drink.”

Upon export to Europe, cassina was marketed in England under the names “Carolina tea” and “South Sea tea,” and in France as “appalachina,” likely a reference to the Appalachee people. This confusing array of names emphasizes the practicality of the Linnaean classification system, which was still in its infancy when Europeans learned of cassina. William Aiton, an eminent British botanist and horticulturist, director of Kew Gardens, and “Gardener to His Majesty,” is credited with giving cassina the scientific name it bears to this day: Ilex vomitoria. Ilex is the genus commonly known as holly. Vomitoria roughly translates to “makes you vomit.”

Cassina does not make you vomit. Both modern scientific analysis and centuries of regular use by Southerners confirms this. But several early European accounts of cassina mention vomiting. Cassina seems to have been used in elaborate purification rituals where men sat in a circle, sung or chanted, and took turns chugging and then throwing up hot cassina.

Yet other detailed, first-hand accounts of indigenous people drinking cassina don’t mention vomiting at all. Anthropologist Charles M. Hudson and others have suggested that a plant with emetic properties may have been added to the cassina brew (unbeknownst to European observers) or that the black drink ceremony may not have involved cassina at all. Alternatively, if the ritual vomiting did, in fact, involve only cassina, the sheer volume of liquid consumed could explain the vomiting. So could the fact that vomiting was a common ritual practice for Southeastern indigenous people—participants may have trained themselves to throw up at will.

Nevertheless, the association of cassina with vomiting persists: Sources such as the Oxford English Dictionary erroneously describe yaupon leaves as having emetic or purgative properties, keeping alive the myth that cassina makes you throw up.

William Aiton may have simply made a long-perpetuated mistake when he named cassina “Ilex vomitoria.” But there’s reason to believe he and other Europeans conspired against the plant.

As the royal gardener, Aiton knew some of the richest and most powerful people in the British Empire. One of the most profitable and influential forces in that empire was the East India Company, which held a virtual monopoly on the tea trade. Its officers may well have worried that cassina represented a potential replacement for a lucrative British commodity, especially as it grew abundantly within regions then under the control of Spain and France.

In his entry on Ilex vomitoria, Aiton listed “South-Sea Tea” as a common name for cassina, suggesting he was aware of its use as a beverage amongst the English. Further, Aiton chose the name vomitoria even though Carl Linnaeus, the founder of the modern taxonomic system, referenced cassina under the name Ilex Cassine vera Floridanorum in 1753. (Ilex cassine is now the name for a close relative of cassina, the dahoon holly, which has significantly less caffeine.)

If Aiton’s sensational name choice was simply a mistake, it could have been corrected in the subsequent edition of his book Hortus kewensis, which was published by his son in 1810. It’s hard to imagine both Aitons missing Bartram’s Travels (the first English edition was published in the early 1790s) wherein Philadelphia botanist William Bartram describes southeastern American Indians and European traders drinking cassina and makes no mention of them throwing up. There’s no smoking gun, but given that the British Empire passed laws and went to war to maintain monopolies on goods such as sugar, tobacco, and opium, it’s possible Aiton engaged in scientific slander.

Either way, cassina never developed into a major English export or drink of choice. Recent research at the University of Florida suggests that the scientific name continues to make people “leery of buying” cassina despite preferring it over maté in a blind taste test. In the words of Charles M. Hudson, our insistence on associating cassina with vomiting may be because “we are all too ready to emphasize the bizarre and exotic in the cultural practices of the Indians.”

That’s not to say that cassina was never drunk widely after the colonization of the Americas. In the earliest days of the Southern colonies—when plantations were being carved out of woodland and luxury imports were rare—cassina drinking was widespread from slaves to plantation owners. But as plantations became larger and more profitable, the nouveau riche demonstrated their wealth by drinking expensive imported tea.

“Cassina was so abundant on the coast,” writes Hudson in Black Drink: A Native American Tea, “that it could be drunk by the poor; hence it became déclassé.” An 1883 encyclopedia entry on cassina summed up this new state of affairs when it stated that cassina is “still used as a beverage by the poorer classes in North Carolina.”

The Civil War reinforced this association of cassina with a hardscrabble lifestyle. When the South seceded, luxury imports became scarce, and both rich and poor turned to cassina. After the war, when coffee and tea became available again, cassina had acquired more negative associations: war, hunger, and defeat.

In the modern South, cassina, usually known by the name yaupon, is just a plant: a border shrub or small tree in residential developments. (Americans regularly walk by the caffeine-producing plant on their way into coffee shops that source beans from the other side of the globe.) Whether or not the ongoing cassina revival can reverse its ignominy and poor reputation remains to be seen.

The extent to which coffee and tea are now being marketed as ethical, fair, and environmentally friendly, as well as the surging popularity of cassina’s cousin, yerba maté, would seem to indicate that cassina’s time has come. And yet, as the many calls for cassina’s rediscovery over the past century show, cassina has long been predicted as the next big thing. For it to succeed commercially, a change to its botanical name may be necessary: Like an acquitted suspect, no matter how many times cassina is proven innocent, an air of suspicion and nausea lingers from the original accusation.

Novelty, which has replaced necessity as the driving force behind cassina consumption, can only take cassina so far. So what’s hopeful about the recent cassina revival is that it’s centered around cities such as Austin, Texas, and Asheville, North Carolina, which boast strong local food movements. The cities’ growers and cafe owners are touting the unique, richly herbaceous, complex flavor of cassina. It’s also recently become available for purchase by the bag and appeared in bottles in specialty food stores.

Because while explaining cassina calls for a trip into contentious history and unsettling nomenclature, taking a first sip of yaupon is revelatory: North America’s rightful caffeinated drink simply tastes wonderful.

While credit for the dish is widely shared, here’s how to choose ingredients that celebrate its Indigenous roots.
restaurants

Researching traditional foods led them to the revelations of an archaeological dig in Kentucky.
trees

Easy foraging can add a touch of the forest to your tea, stews, and even bath.
Video • Wonder From Home

Grab a latte at the birthplace of modern American skateboarding.
Atlanta, Georgia