Scientists of the Future Will Unearth Traces of the Scorched Amazon Rainforest - Atlas Obscura
Want to see fewer ads? Become a Member. 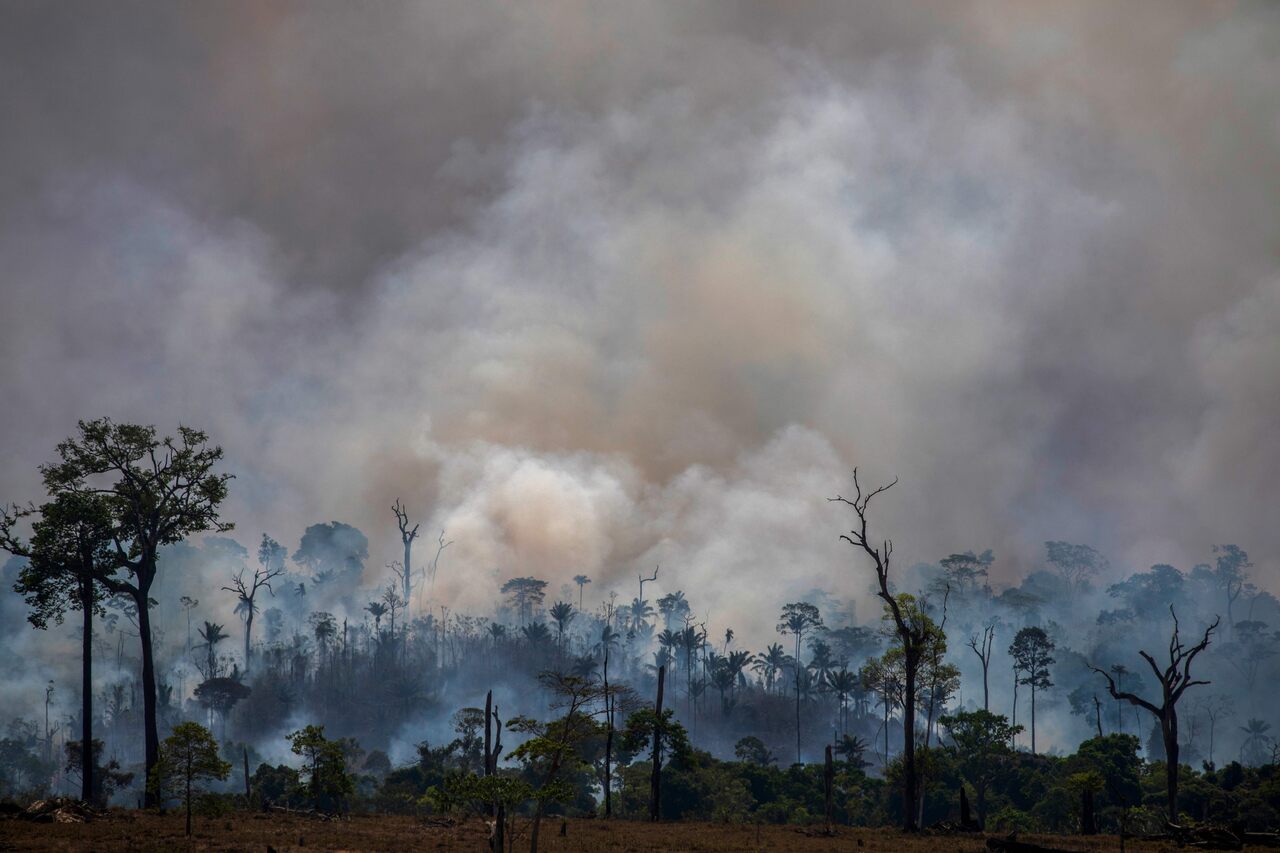 Fires are tearing through the Brazilian Amazon, including Altamira, pictured here on August 27, 2019. JOAO LAET/AFP/Getty Images
In This Story
Destination Guide

The Amazon is burning. In Brazil, tens of thousands of fires have scorched the rainforest this year, according to the country’s National Institute for Space Research, and several recent weeks of intense blazes have turned lush green landscapes gray and brown, reducing trees to skeletal stumps in billows of smoke. The fires have displaced the creatures that live in the forest, encroached on land demarcated for indigenous groups, and smudged the skies of faraway cities. Judging by data gathered aboard NASA satellites, the Brazilian Amazon hasn’t seen fires this numerous and intense since 2010. Meanwhile, some of Bolivia’s forests are also ablaze.

Long after the fires stop, the legacy of their destruction will linger in the earth, and in the trees that eventually sprout inside the burned area. Tens, hundreds, even thousands of years from now, scientists could sift through what’s left behind and puzzle out some information about the damage we can currently see from space. This year’s damage will be etched into natural history in the form of charcoal.

“Typically, in the Amazon proper, researchers associate any charcoal at all with human presence,” says Nigel Pitman, a conservation ecologist at the Keller Science Action Center at the Field Museum in Chicago. While lightning strikes may char a tree or savanna at the edge of portions of the Amazon, most threatening bolts coincide with the wet season, meaning that a fire they spark will likely “burn out within a few meters,” explains Crystal McMichael, an assistant professor at the Institute for Biodiversity and Ecosystem Dynamics at the University of Amsterdam. Much of the land covered by thick forest is so mightily humid that “it is too wet to burn naturally,” McMichael says.

The fires currently ripping through the Amazon were set deliberately, likely to make room for ranching and farming, and are fueled by past human activity. Deforestation has dried out the area and produced “dead fuel to be burned, and microclimates that are more conducive to sustaining fire,” says Mark Bush, a paleoecologist at Florida Institute of Technology who specializes in the ecological history of South America.

Evidence of past infernos hangs around in charcoal particles, which collect on the ground and water almost instantly and last indefinitely, Bush says. These fragments are easiest to track at the bottom of lakes or peat bogs, where sediment accumulation tends to be greatest, according to Hermann Behling, a botanist at the Albrecht-von-Haller Institute for Plant Sciences at the University of Göttingen, who works on palynology (the study of pollen and spores) and climate. Watery environments are spared the disruption of wriggling worms, falling trees, or burrowing animals—and oxygen-depleted environments like bogs can preserve pollen records, too. “Some Amazonian lakes deposit so much sediment that you can [occasionally] see annual banding patterns stretching back thousands of years,” says Bush. To date charcoal in churned-up soil, on the other hand, researchers would likely have to date each fragment.

Charcoal particles can also help researchers determine what kind of plant matter a fire ravaged, and the size of the fragments suggest where the blaze likely burned. “Grasses don’t produce charcoal, so when you find it, you know forest was burned,” Bush says. Particles larger than 150 micrometers suggest that a fire raged locally, Behling says, while ones smaller than that size indicate that a blaze sizzled somewhere between 10 and 100 kilometers (or between six and 62 miles) away. “Very small particles can be transported by wind over longer distances—while larger particles, not that much,” he says.

Finding many bits of charcoal scattered across several lakes is another indication of a conflagration’s big footprint. “When you dig multiple holes in a landscape and find charcoal fragments of the same age, it gives you an idea of the spread of the fire,” Bush says. Taking soil cores—which narrate the long history of the forest, as told through layers of dirt—is also a way to look for hints of several past fires at once. Scientists can even read the chemistry of charcoal to reconstruct the approximate heat of past blazes, distinguishing, say, between lower-heat fires and the hotter ones that tear through a rainforest canopy, according to a recent paper by Crystal McMichael and her University of Amsterdam collaborators.

Though leaves can be consumed completely by fire, biogeochemists might find traces of flame-licked foliage in lake or soil records, in the form of phytoliths, microscopic remains that mainly consist of silica. Scientists may also detect the compound levoglucosan, which occurs when cellulose burns. Trees are chock full of cellulose, and because levoglucosan forms through fire, it is “a robust marker for characterization and quantification of [biomass burning] throughout the world,” an international team of researchers recently reported in Atmospheric Research. Fires can also register as abnormalities in tree rings, and as damaged bark on trees that are licked but not felled by flames.

Even after the fire is extinguished, a singed forest is never the same. “The danger is that the forest that comes back after a fire doesn’t look a whole lot like the forest that was there before,” says Nigel Pitman, the Field Museum conservation ecologist. Even if the area burned by the fire is allowed to regrow, instead of being tapped for agriculture, the landscape may be dominated by different species.

The particular plants that are first on the scene will depend on which pollinators fly by and which seeds disperse, says Farah Carrasco-Rueda, an ecologist at the Field Museum whose work focuses on the Amazon. If the forest is completely gone, the newcomers will be sun-loving, fast-growing plants that wouldn’t have been at home beneath a dense, dappled, humid canopy. You’ll likely find secondary forests starting to crop up within 15 to 20 years, she adds, and these will be joined by plants that tolerate the shadows those trees cast. Eventually, these will grow into a mature forest.

Subsequent fires on a once-scorched footprint are likely to do even more swift and debilitating damage. “The bottom line is that fire is unnatural in Amazonia,” Bush says, “and the organisms have not evolved with it.” After a tract burns, “it portends a much more rapid degradation of the remaining mature forest,” he adds. A single fire may kill the ground-nesting birds, and a sizable share of the trees, he says, while “a second fire in a few years will cause complete mortality.” Which means that the next fires that sweep through could be even more devastating.

As wildfires rage across the West, an old job feels more critical than ever.
forests

How Does an Archaeologist Keep Heritage Sites Safe From Wildfires?

Brazil Nuts Are Brought to You by Rodents

The snack wouldn’t exist without the help of one furry critter and its unusually sharp teeth.
Read more
Thanks for sharing!