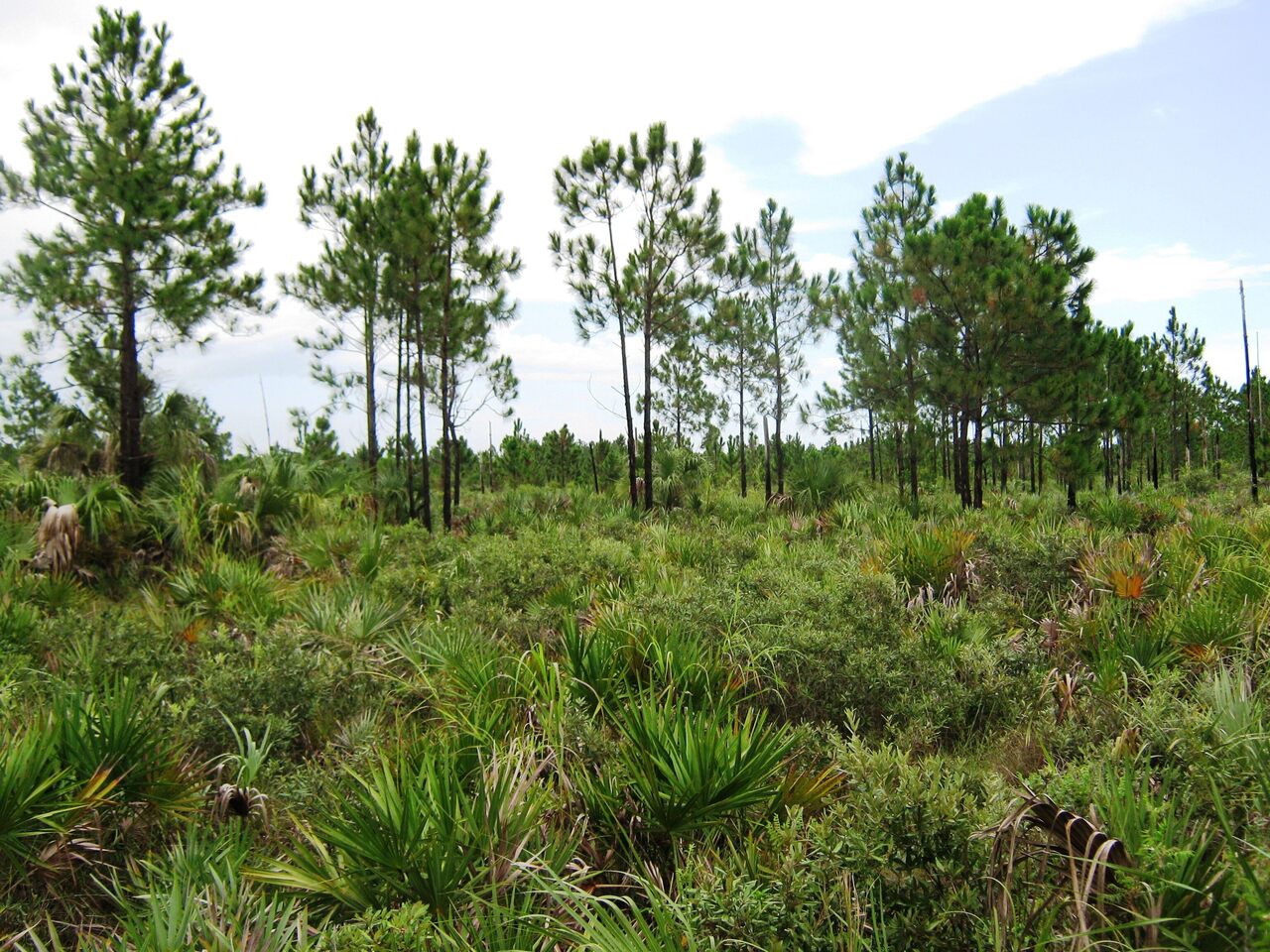 Welcome to the pine rocklands, one of the world's most endangered habitats. Frank Ridgley
In This Story
Destination Guide

It’s January in Florida—divine, sun-soaked, not humid enough to be buggy—and Frank Ridgley is driving a golf cart across the sprawling grounds of Zoo Miami. The zoo is home to many endangered species, from the native Florida bonneted bat to the African painted dog, but on this day it’s not an animal Ridgley is going to see. Behind its menagerie, Zoo Miami hosts one of the world’s most endangered habitats: pine rockland forest. The forest once covered 185,000 acres of Miami-Dade County, from North Miami Beach to Long Pine Key in the Everglades. But today, this ancient, snaking ridge is largely indistinguishable from its surrounding habitat: crystalline condos, strip malls, and asphalt voids. Today less than two percent of the pine rockland remains intact in the county, scattered in pockets so small that even most locals haven’t heard of it.

Ridgley, who moved to Miami from Buffalo in 2007, has lived here long enough to be considered a local. He joined Zoo Miami as a wildlife veterinarian and now works as the head of conservation and research. Since 2011, he’s been on a mission to restore Zoo Miami’s pine rockland to its original glory. Ridgley, a magnetically friendly guy, even behind the opaque black sunglasses that now rest atop his head, expertly steers the golf cart through the zoo’s strangely labyrinthine parking lot—the site was once an airfield for blimps in World War II—to a towering chain-link gate. “Just in case the animals get out,” he says. As soon as the gate whirrs closed, he pauses to tune out an alert on his walkie-talkie—something about the dung compost bin? “Welcome to the pine rocklands, or what’s left of it,” he says, gesturing to a spiky, almost alien assemblage of plants on the side of the road.

Before Miami was a city, it was a forest born from the bottom of the ocean. Stilt-like slash pines stretched toward the sky and jagged bunches of saw palmetto fanned out on an ancient limestone ridge, the fossilized remains of a coral reef over 100,000 years old. This ancient substrate is also so incredibly hard—more rock than soil—that its slow-growing plants have complicated root systems that feather deep into the ground to absorb nutrients. Though the Everglades certainly appear lush and teeming, it’s pine rockland that boasts the highest diversity of plant species of any habitat in the state.

“Before the air base, this whole site was a continuous pine rockland forest,” Ridgley says. “No one realized how unique and special this habitat was until it was all gone.” Even this patch isn’t actually original; it was restored just a few years ago after invasive species had taken over. The plants are still young and short, and fade into swaths of older pine rockland behind it. “This is what Miami originally was like,” Ridgley says, dropping his sunglasses over his eyes.

Miami wasn’t just built on this forest, but from this forest. Dade County slash pine, which grows up to 100 feet tall and boasts incredibly hard and blessedly rot-resistant timber, was harvested to near-extinction for the development of the city in the early 20th century, according to the Coral Gables Museum. Pine rockland vanished so quickly because the elevated rock ridge it grew on is some of the highest, most stable ground in Florida—a state that is otherwise on track to slip into the ocean as climate changes. It had other benefits as well. “In the summertime, we don’t even have mosquitoes here because water doesn’t say pooled up,” Ridgley says. “It’s the perfect place to build.”

As he speaks, Ridgley stands in the middle of the road, between the crisp patch of pine rockland and an enormous, camel-colored mass of Burma reed, a powerful invader that escaped from a test garden in a suburb of Miami and quickly colonized much of the surviving forest. It’s a stark juxtaposition: a vibrant array of pines, palms, succulents, and wildflowers next to a homogenous tan heap the size of a rhinoceros. Ridgley then drives on, staying close to a moat that encircles much of the zoo’s property—another failsafe for escapees, he says.

The majority of the pine rockland habitat in the Zoo Miami grounds has been swallowed by Burma reed, which ordinarily could not take root in terrain this rocky. Once the ground is disturbed, however, there’s an opening for it to proliferate. “We still have scars from 80 years ago, where the blimps landed,” Ridgley says. That, along with heaps of soil brought in by the military, invited in Burma reed. “If you look at a historic map of the base on Google Earth, you can see the circles where blimps would land and tie down,” he says. “Those spots are all covered in invasive plants now.”

To restore pine rockland, you have to get rid of all of this, and strip the land down to its original limestone cap. This process turned out to be much more painstaking than Ridgley had anticipated when the restoration project began in 2011. “We thought it would just be a few piles of substrate with invasive plants,” he says. “It ended up taking two front end loaders and two dump trucks two weeks to get down to the actual rock.” And that was for just one acre—a fraction of the forest that could be resurrected by Zoo Miami with enough time, effort, and money.

Though it may be pretty, a fossilized coral reef can’t exactly be replanted by hand. Once the overgrowth was cleared for the first restoration planting in 2011, Zoo Miami staff drilled holes into the rock so volunteers could plant native flora. The line-up of endangered plants have wild names that seem right at home in Florida: crenulate leadplant, Coker’s creeper, Havana skullcap. Ridgley has led several other group plantings for patches of pine rockland since then. The process takes a long time, and he estimates it would take another decade of steady work to clear out the Burma reed from Zoo Miami’s admittedly small patch of pine rockland habitat.

Almost as soon as the native plants enter the rock, wildlife returns, particularly native butterflies. One of the most frequent visitors to the restored rockland is the endangered Bartram’s scrub-hairstreak butterfly, which depends upon a single host plant, the pineland croton. “One volunteer was planting a croton, and before the plant was in the ground, a Bartram’s scrub-hairstreak landed on it and began laying its eggs,” Ridgley says. Other endangered animals, many of which depend on narrow niches in the specialized ecosystem, have benefited from the restoration. A prime example is the Miami tiger beetle, a tiny, iridescent green bug thought to be extinct until its rediscovery in 2007. The beetle requires pockets of quartz sand, a habitat feature unique to pine rockland. It is now only found in just two populations, including one near Zoo Miami, according to the Florida Fish and Wildlife Conservation Commission.

The future of the zoo’s pine rockland appears secure for now, but the habitat has far fewer guardians elsewhere in the city. A significant slice of one of the last remnants—one of the ones that hosts the Miami tiger beetle—is about meet its horrifically mundane future as a Walmart, LA Fitness, and Chili’s, according to the Miami New Times. Despite years of activism from environmentalists and private citizens, construction began in 2018, and in 2019 the activists lost their final legal stand against the project, called Coral Reef Commons, according to the Miami Herald. “South Florida is starting to look like a well-gnawed chicken bone,” Matthew Schwartz, the head of the South Florida Wildlands Association, told the New Times.

The few patches of pine rockland outside Miami-Dade County are in the Florida Keys, where they are even more imperiled by sea level rise. The only healthy forest is on Big Pine Key, right next to a ghost forest subsumed by the ocean, according to a report from the Miami Herald. “We’re going to lose so much,” Ridgley says. It only takes half an hour to cover the entire loop of the zoo’s pine rockland in a golf cart, and soon Ridgley has emerged from the waves of Burma reed, past the antelope-proof gate, and back into the parking lot. There, below the asphalt, is a preview of the future of much of the remaining pine rockland habitat—past the point of saving.

The Art and Science of Kashmir's Pink Tea

A food designer used quarantine to track down the mystery produce in his grandmother's cookbook.
forests

They got legs, and they know how to use them.
butterflies

This California Man Has Dedicated His Backyard to Saving a Butterfly

6:46
Want to see fewer ads? Become a Member.
From Around the Web
Related

The demise of Arabica's birthplace would be a catastrophe for the industry.
Read more
Thanks for sharing!