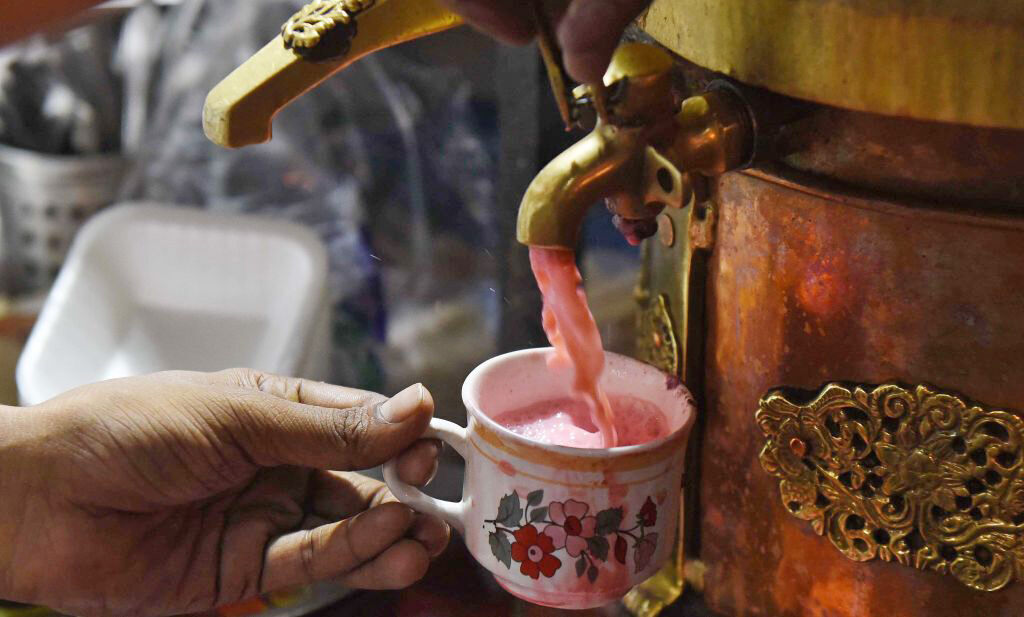 On chilly winter evenings in Lahore’s Lakshmi Chowk, a bustling marketplace famous for street food, tea vendors sell a pink beverage known as Kashmiri chai. Made with green tea, Kashmiri chai has a savory taste that belies its strawberry-milkshake appearance. The millennial-pink beverage is wildly popular, as both a drink and a color. In Pakistan, upscale cafes sell Kashmiri chai cheesecake, and “tea pink” is a trendy shade for wedding outfits, men’s shirts, and even lingerie.

Originally a Himalayan drink, pink tea goes by many names across South Asia, some which reference its unusual color and flavor, from nun chai (salt tea) to gulabi chai (rose-hued tea). Salt and baking soda are key ingredients. Salt acts as an electrolyte to prevent dehydration at high altitudes, and baking soda is the catalyst that turns it pink. Infused with spices such as star anise and topped with crushed nuts, the tea is tailor-made for cold weather. In Kashmir, nun chai is drunk piping hot several times a day, accompanied by an array of breads: crispy kulcha, dimpled girda, or bagel-like tsochwor.

Salty with a hint of bitterness, pink tea mirrors the current mood in Kashmir. A geopolitical turf war between India, Pakistan, and China has torn the region apart, making it one of the most militarized zones in the world. Following a terrorist attack last year, the Kashmir Valley lost its status as an autonomous region within India and was cut off from the outside world. Life in the valley ground to a halt. Kashmiris will readily admit that in times of uncertainty, they savor quotidian pleasures like tea breaks. Pink tea helps chase away the blues. One Kashmiri blogger writes: “It’s the closest thing to an antidepressant.”

Making pink tea is a painstaking process that is both science and art. The first step, a prolonged boiling of green tea leaves with baking soda, involves a bit of chemistry. Certain fermented teas, when boiled with a pinch of soda, change color from amber to deep maroon. Scientists call that an acid-base reaction, where sodium bicarbonate neutralizes mildly acidic tea, enhancing the color but also taking the edge off its astringent tannins. An international biochemistry journal, which held a contest called the “Pink Tea Challenge,” explained the science behind the color change: “Polyphenols in green or Kashmiri chai act similar to phenolsulfonphthalein, a common pH indicator better known as phenol red.”

Once the tea turns burgundy, the liquid is shocked with ice or cold water to preserve the color. BBC journalist and food blogger Aliya Nazki uses a Kashmiri colloquialism to describe the perfect hue. The concentrate, she writes, should look “just like pigeon-blood.” When milk is added, the tea turns pink. At this point the boiling liquid is repeatedly poured back into the pot with a ladle and vigorously aerated, a technique similar to frothing milk for coffee. “It is very laborious work,” says a London pink tea vendor featured on YouTube. It takes her four hours to produce a batch of hand-frothed Kashmiri chai.

Traditionally made in a copper samovar, pink tea is related to the salty milk teas of Central Asia, among them etkanchay, a Uyghur tea, and Mongolian suutei tsai. The story goes that the tea came to Kashmir from Yarkand (now in Xinjiang, China) through the Silk Road. But the use of soda hints at connections closer to home. Adding alkaline salts to po cha (yak butter tea) in order to obtain a darker brew originated in the Tibetan plateau, where abundant deposits of natural soda were part of the rugged terrain.

The saline landscape extended into Ladakh in eastern Kashmir, where soda crystals gathered near hot springs were used for making gur gur cha, the local version of butter tea. The Kashmir Valley picked up the tea drinking habit from their neighbors, importing the natural soda, known as phul, from Ladakh as well as brick tea from Lhasa. But Kashmiris adapted the tea to local tastes. They took the yak butter out, replacing it with milk and cream. Stripped of fat, the tea revealed its true colors: a rosy blush often referred to as “peach flower.”

Charles von Hügel, an Austrian explorer who wrote an extensive account of his travels in Kashmir during the 1830s, was one of the first westerners to give the world his unvarnished opinion of pink tea. “The taste is like that of a strong soup made out of scorched flour,” he wrote. Even Kashmiris acknowledge that salty tea is an acquired taste. Journalist Scaachi Koul joked that the tea is “one of our worst culinary contributions to the world and we should be ashamed.”

But the Kashmiri teas sold from Lahore to London are crowd pleasers, more sweet than salty. As pink tea moved away from its Himalayan roots, salt became a minor player. The Chai Spot in Manhattan serves a creamy pink tea infused with cardamom and sweetened with brown sugar. In Afghanistan, rosy qymaq chai does not contain even a token pinch of salt.

More than just a daily beverage, pink tea is a state of mind. 15 years ago, the novelist Salman Rushdie wrote an allegorical tale about love and betrayal in Kashmir. In Shalimar the Clown, Rushdie describes his ancestral land as “a tasty green sweetmeat caught in a giant’s teeth,” whose inhabitants were weary of never-ending war. All they want is azadi. Freedom, in other words, to worship as they please and to “drink salty tea.”

During WWII, Bletchley Park Was Home to Codebreaking and Tea Shenanigans

Staff at "Station X" threw their teacups into lakes and stuffed them into hedges.
food

The Forgotten Drink That Caffeinated North America for Centuries

The owner of Alcôa has devoted decades to recovering lost pastries.
libraries

A new internet archive is making the region's culinary history more accessible than ever.
Video • Wonder From Home

For computer-graphics researchers, it's both a tool and a meme.
Read more
Thanks for sharing!