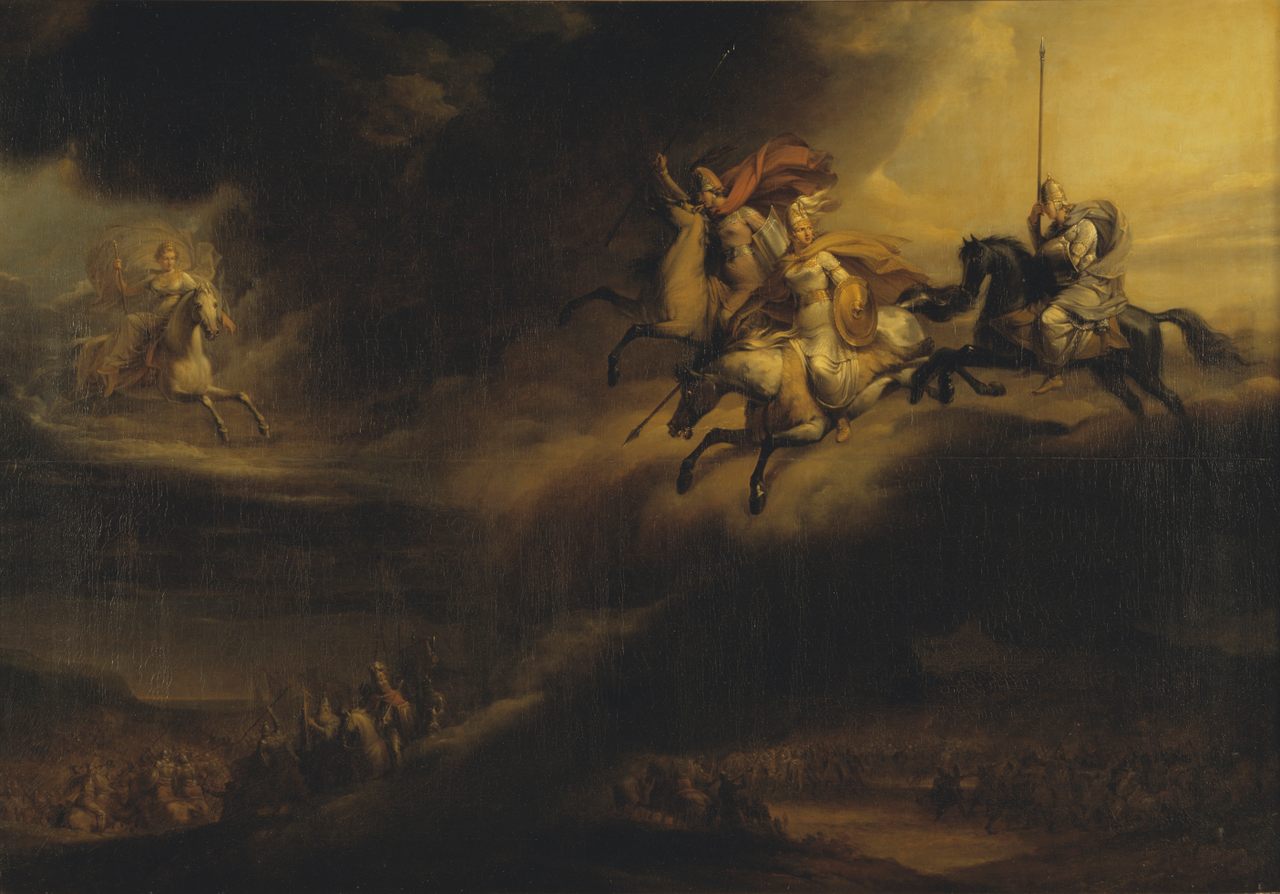 The National Museum of Stockholm's Ride of the Valkyries was painted during the Victorian period, which saw renewed interest in Vikings. Fine Art Images / Heritage Images / Getty Images
In This Story
Destination Guide

In 1871 on the sleepy island of Birka, Sweden, Hjalmar Stolpe, a Swedish entomologist turned archaeologist, discovered the lavish grave of a Viking warrior. Around the seated body were the remains of two sacrificed horses, as well as a double-edged sword, a scramasax (a long, thin knife), a bow, a shield, and a spear—every weapon known to the Viking world. It was an astonishing find, especially since Viking warrior graves rarely contain more than three weapons. There was also a full set of hnefatafl, the board game often known as Viking chess, which indicates the strategic thinking and authority of a war leader. A thousand years ago, the site would’ve abutted the Warrior’s Hall, where a garrison lived to protect the bustling Viking town of Birka. The weapons, game pieces, location: Everything told scholars that the man buried in what is known as grave Bj 581 was a prominent, well-respected Viking warrior. No one was really prepared when DNA tests were conducted in 2017 and a new story began to emerge. This was a prominent warrior, all right, but the occupant of Bj 581 wasn’t a man. She was a woman.

Viking historian Nancy Marie Brown’s new book, The Real Valkyrie: The Hidden History of Viking Warrior Women, explores what life might have been like for the warrior woman of Bj 581. Using more evidence from the recent tests conducted on the remains, Brown traces her journey from Norway to the British Isles to Kiev then, finally, to Birka. Brown imagines the unnamed warrior meeting other prominent Viking women, such as Gunnhild, Mother of Kings, or Queen Olga, ruler of the Rus Vikings in Kiev. She also explores the Viking sagas and contemporary sources with a new lens.

Atlas Obscura spoke with Brown about her new book, valkyries, and the assumptions that underlie the history we think we know.

How did you initially get interested in Vikings—and female Vikings in particular?

When I went to college, I actually wanted to study fantasy writing and, you know, learn to write like Tolkien. I learned very quickly that that was not appropriate for an English major in the 1970s, so I decided to study what Tolkien studied, and he was a professor at Oxford University, teaching Old English and Old Norse. So I started reading all of the Icelandic sagas that I could find in translation. And when I ran out of the English versions, I learned Old Norse so that I could read the rest of them.

One of the things I liked about [the sagas] the most was that they had really interesting women characters. There’s a queen in Norway who appears in about 11 sagas, Queen Gunnhild, Mother of Kings. She led armies. She devised war strategy. And then I was looking at the valkyries and the shieldmaids and thinking, you know, these are really interesting people that have always been considered to be mythological.

So when I learned in 2017 that one of the most famous Viking warrior burials turned out to be the burial of a woman, that just absolutely dazzled my imagination.

Is this the first confirmed grave of a female warrior that we have?

This is the one that has the best proof. There are one or two others that have since been DNA tested and proven to be female. But in each of these cases, it’s hard to say if the person in the grave, whether male or female, actually was a warrior, or if the object that we are interpreting as a weapon was used for hunting or for some other purpose.

In this case, it’s every Viking weapon known to history. So it’s such a clear result. And the DNA was so completely female.

What do we know about the life of the Viking warrior woman in Bj 581?

In 2017, by testing her bones and her teeth, [scholars] could say she was between 30 and 40 years old when she died. They could also tell that she ate well all of her life. So she came from a rich family or maybe even a royal one. She was also quite tall, about 5’7”. By the minerals in her inner teeth, [scholars can determine] she may have come from southern Sweden or Norway, and also that she went west maybe as far as the British Isles before her molars finished forming. She didn’t arrive in Birka until she was 16.

We also have her weapons and a little bit of clothing that were found in the grave. And these link her to what is known as the Vikings’ East Way, which was the trade route from Sweden to the Silk Road.

We can link, through the artifacts and through the bones, that she could have traveled from as far west as Dublin to as far east as at least Kiev in the 30 to 40 years of her life.

How do we know that there were Viking warrior women?

They are mentioned many, many, many times in the literature. In most cases, they have been dismissed as mythological because, of course, we know warriors were men. But we don’t know that. That is an assumption that is based on traditional Victorian ideas that because women are mothers, they’re nurturing, they’re peacemakers, and they don’t fight.

That’s not historically true. Women have always fought. And they appear in most cultures until the 1800s, when Viking studies and archaeology pretty much started. So we sort of have this problem of bias in our earliest textbooks.

But now we have actual scientific proof of one warrior woman in the Viking Age. And as the scientists who did the study say they would be very surprised if she was the only one.

There’s this assumption that the warrior men of myth must have been based on real people, but it’s not the same for the mythical warrior women. Why is that?

It’s just an assumption based on what people think women are like. Most of the material we have from the Middle Ages was written by men, and most of the material we have until the 1950s was written by men, and women are slowly making their way into the field of Viking scholarship. But many of them are still working under the assumptions that they were taught.

I noticed when I went back and reread some of the sagas in Icelandic that there wasn’t this clear distinction between the warrior women being mythological and the warrior men being human. When you actually look at the old Norse text, there’s a lot of words that have been translated as “men” that actually mean “people,” but it’s always been translated as “men” because it’s a warrior situation.

If you’re translating, you have to make decisions and sometimes your decisions have repercussions that you don’t expect, like writing women out of the history.

Is it possible for historians to remove all of those biases?

No, I don’t think it is. I think we all are looking through our own lenses. But we have to revisit those sources every generation to see past biases. So when you have layer after layer after layer of removing biases, you may get closer to the truth.

What most surprised you in the course of researching your book?

One of the controversies right now in Viking studies is should we really be talking about men and women at all? Maybe there were all kinds of different genders. We don’t know if there were more than two genders in the Viking age. Maybe it was a spectrum.

If you look at this one group of sagas called the Sagas of Ancient Times that are often overlooked because they have all these fabulous creatures in them, like dragons and warrior women. It’s really interesting [because] these girls grow up wanting to be warriors. They’re constantly disobeying and trying to run off and join Viking bands. But when they do run off and join the Viking band, or, in another case, become the king of a town, they insist on being called by a male name and use male pronouns.

So it was very shocking to me to go back and read it in the original and say, “Wow, all this richness was lost in the translation.”

From California’s mythic warrior queen to the swole women of Sparta to female hunters in ancient Peru.
military history

From Italy’s fortress-seizing countess to Angola’s battle-hardened Queen Njinga, these women didn’t back down from a fight.
fairytales

What is a Fairy Fort?

In Ireland, fears about disturbing the fair folk have saved thousands of these mysterious ancient structures.
kickass women

The “she generalissimo” nearly won the English Civil War for her husband, King Charles I.
Video

7:29
Want to see fewer ads? Become a Member.
From Around the Web
Atlas Obscura Trips
Rewilding: Tracking Wolves in the Forests of Sweden
View This Trip
Thanks for sharing!