Is This $88 Portrait the Work of a 17th-Century Flemish Master? - Atlas Obscura
Want to see fewer ads? Become a Member. 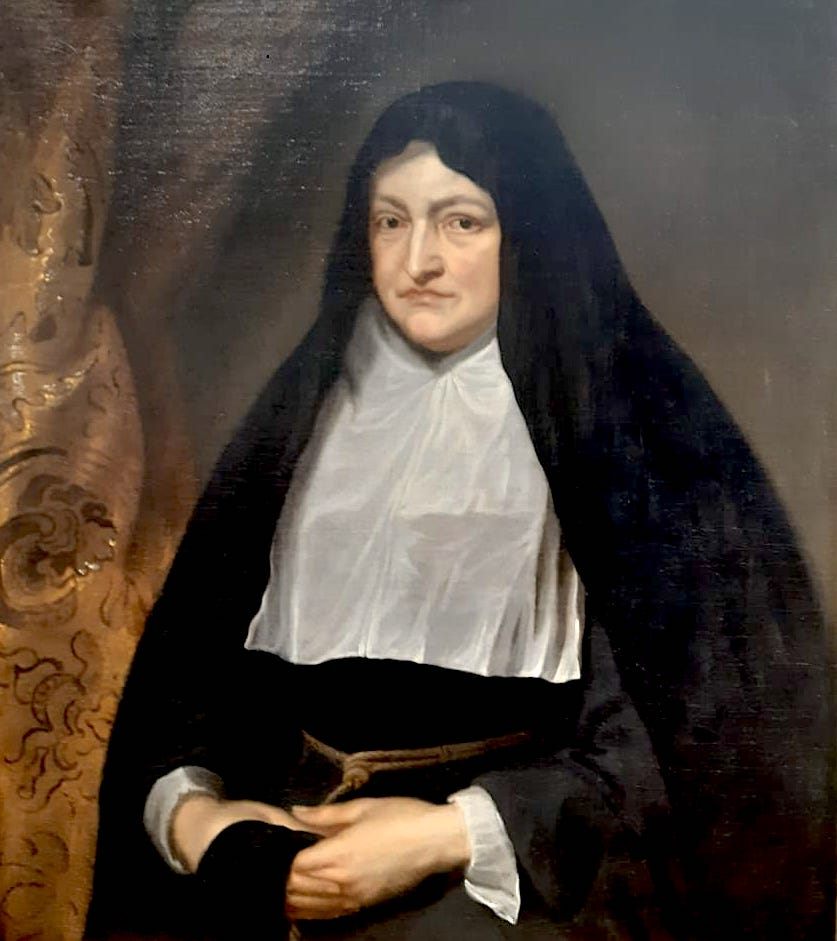 This portrait of the Infanta Isabella Clara Eugenia, ruler of 17th-century Antwerp, may be the work of the Flemish master Anthony van Dyck. Christopher Wright
In This Story
Destination Guide

More than half a century ago, a young librarian wandered inside a small London antique shop. There, amongst vintage furniture and porcelain vases, was a stern, elderly woman in a black nun’s habit. She stared him down from an elaborate wooden frame. Believing the painting to be an unknown artist’s copy of Anthony van Dyck’s “Portrait of Infanta Isabella Clara Eugenia,” Chris Wright, the librarian, bought the painting of the “bad-tempered old lady,” for £65 (about $88), the equivalent of about three weeks’ wages. For decades, she hung above his fireplace mantel, becoming the butt of jokes as guests gaped at the out-of-place portrait. People would think, “what the earth is that?,” Wright says.

Now Wright is closer to an answer to that question. A newly published report from the Courtauld Institute of Art “tentatively proposes” the painting isn’t the anonymous copy Wright believed it to be. Instead, it suggests the portrait is actually the work of Flemish painter Anthony van Dyck’s workshop—perhaps even the work of the master himself.

Despite a background in 17th-century art history, Wright never doubted that the painting hanging above his fireplace was anything but a good imitation of van Dyck’s original 1627 portrait of the Infanta Isabella Clara Eugenia. The Infanta, as she was known, was one of the most powerful women of her time, co-ruling Brussels with her husband for 22 years and ruling in her own right for 12 years. She adopted the nun’s habit following her husband’s death as an act of mourning and piety.

Unlike Wright, Colin Harrison, the senior curator of European art at the Ashmolean Museum, saw something different when he stopped by Wright’s London apartment to take a look at another painting in Wright’s collection in December 2018. The unflinching gaze of the Infanta immediately caught his attention. Harrison told Wright that the painting really looked like a van Dyck. After that Wright gave the painting to the Courtauld in 2019 for a “proper investigation.”

The Courtauld, a college and museum specializing in art history and conservation, selected the portrait as part of its “Painting Pairs” project. Over the course of a year, conservation student Kendall Francis and art history student Timothy McCall collaborated on a study of the painting. As Francis cleaned the painting, McCall researched. They then synthesized their analysis into a final report and presentation, where they agreed with Harrison’s initial hunch that the painting may, in fact, be from van Dyck’s workshop.

When he heard the results, “my reaction was one of gentle pleasure,” says Wright. He had already planned to lend the painting to Cannon Hall, a fine and decorative arts house museum in Cawthorne, England. When the portrait goes on display on February 21, an “extended label” will explain how the painting may have come from van Dyck’s workshop, says Natalie Murray, the museum’s curator.

But even if Wright’s portrait is attributed to van Dyck’s workshop, art historians will likely never know how much of the work was done by van Dyck himself and how much was done by the assistants and apprentices he employed. In his later years, van Dyck had a team of people helping him churn out hundreds of paintings. They’d do everything from prepare canvases to paint works themselves, copying van Dyck’s original.

Making copies of certain paintings was common practice in the 17th century. And Van Dyck painted his original 1627 portrait of the Infanta likely based on one created by his mentor, Peter Paul Rubens.

Van Dyck’s Infanta became the standard portrayal of Antwerp’s powerful ruler. Today there are 20 known surviving versions of van Dyck’s Infanta—all replicas of his original 1627 portrait currently housed in the Kunsthistorisches Museum in Vienna. Some he would have painted. Others his assistants would have painted. And some would’ve been a combination of the two. Further expert appraisal will be required to determine if Wright’s Infanta is the 21st surviving version.

For Murray, the painting’s lack of a firm attribution doesn’t diminish the historical value of its story. (Nor its monetary value; Wright estimates the painting to now be worth £40,000, about $54,500.) “I find the whole story of workshops and how these artists actually went about their business absolutely fascinating,” she says. “I think sometimes people get an image of an artist working very solo, being very much about the individual. But, in this period they were businessmen as well. This was their livelihood and their reputation.”

Why Renaissance Paintings Aren't as Green as They Used to Be

Once a brilliant hue, the pigment verdigris is now mostly brown.
paintings

A Portrait of James I's 'Husband' Has Reappeared in Glasgow

"I desire only to live in this world for your sake," the king wrote to him.
objects of intrigue

It is said the English monarch wore the sleeved waistcoat at his public execution in 1649.
politics

The spectacle in St. Petersburg, Russia, was the site of an incredibly strange wedding.
List