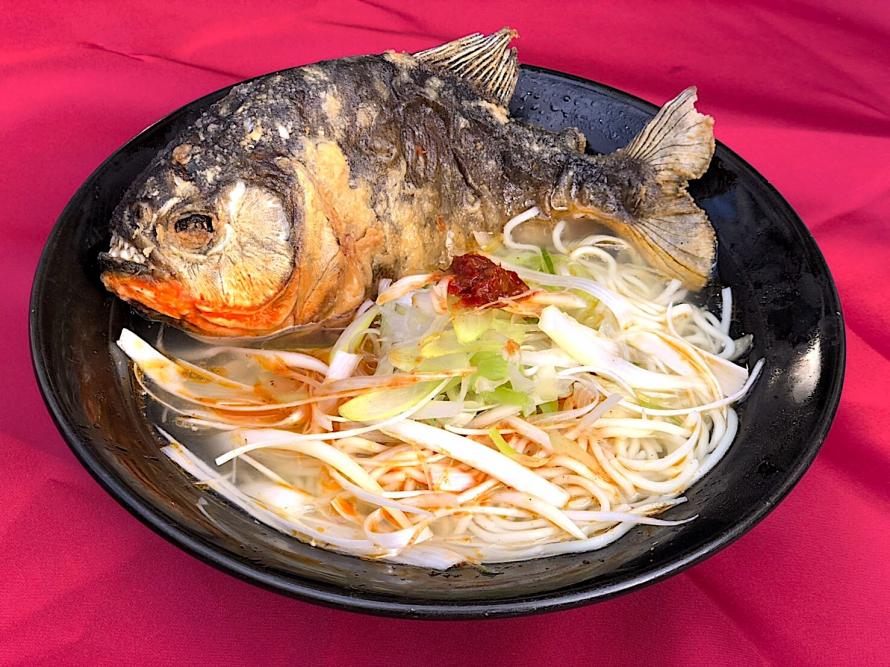 Yano's piranha-men will be sold September 20-23 in Tokyo's Asakusa neighborhood. Courtesy of Holiday Jack
In This Story
Place

Be a ninja - or just act like one.
Destination Guide

This September, a cafe in Tokyo’s Asakusa neighborhood will serve 1,000 bowls of piranha ramen. Made with 300 kilos of piranha sourced from the Brazilian port city of Manaus, they will likely be the first ramen of their kind in Japan, if not the world. It was supposed to be a joke.

The idea came to Tom Yano, founder and CEO of the Tokyo-based events company Holiday Jack, while vacationing in the Brazilian Amazon. As he fished, cooked, and ate piranha daily, Yano acquired recipes from locals and became especially infatuated with a soup called caldo de piranha—a delicacy common to the Pantanal region of Brazil. The bony fish are chunked and simmered in a tomato-based soup with vegetables and herbs. “The taste was really good,” he says. “That’s why I thought piranha soup and ramen [would] match.”

Upon returning to his native Japan, Yano posted an article to his company’s website announcing a piranha ramen event. “The World’s First Piranha Ramen Is Born!” ran the headline. But the sensational article about “the most ferocious and dangerous fish in the world” cheekily noted in the final line, “Thank you very much for reading to the end. This is an April Fool’s joke, and there is no actual plan to offer Piranha Ramen.” Despite the disclaimer, Yano says more than 500 calls poured in from Japanese and international followers inquiring about tickets. “I didn’t expect the article [to] buzz,” he says.

Given all the interest, Yano is following through with the event and will be serving what he believes to be the world’s first piranha ramen. “The joke [became] reality,” he says. Yano spent three million yen ($28,000) flying more than 2,000 whole piranha fresh-frozen from Brazil to Japan, to the puzzlement of customs agents who detained the fish for 13 hours in Narita airport.

The process isn’t new to Holiday Jack. Yano tells me an announcement from three years ago about a piranha-fishing event in Shinagawa prompted a similar response once he admitted that it, too, was a joke. Again, he followed through, and Holiday Jack is now in its third year of semi-annual Piranha Fishing events. He sold 2,500 tickets to last April’s installment.

Yano developed the “piranha-men” recipe, as he calls it, in collaboration with the chefs behind Naritaya Ramen Shop, a renowned restaurant in the popular sightseeing Tokyo neighborhood of Asakusa. Bowls of ramen noodles, vegetables, and “100% piranha broth” will be available for 3,000 yen ($28.20), and adding a whole, fried piranha on top will cost an additional 2,500 yen ($23.54).

Opinions on the culinary value of the freshwater fish vary. A lover of rare meat options, Yano says “it’s good, it kind of tastes like red snapper—almost the same.” Others liken it to lemon sole, while Brazilians even more favorably note a “rich creaminess” and consider it an aphrodisiac. River Monsters’ Jeremy Wade differs, saying “it’s quite bony flesh,” adding “some people say it’s like steel wool mixed with needles.”

The ramen will be served from 5 to 9 p.m. on September 20th, and 11 a.m to 9 p.m. from the 21st to the 23rd, in Yano’s recently opened Ninja Cafe and Bar. The costumed servers, who have trained for a month in Japan’s ancient ninja stronghold of Iga, not only take orders and run food but perform martial arts, from throwing shuriken to blowing darts—just in case eating piranha ramen alone is too tame.

Sold: A Country Ham for $1 Million

The ‘Perpetual Broths’ That Simmer for Decades

The Vietnamese Cafés Where Koi Fish Are the Stars

12 Tokyo Concept Cafés That Go Way Beyond Cats and Maids

Think monsters and fembots instead.
Video • Object of Intrigue

Sidle into a side alley for a taste of sumo wrestlers' traditional hot-pot soup, in a tiny restaurant founded by a former competitor.
Permanently Closed
Tokyo, Japan

A cool dive bar, off the beaten track.
Want to see fewer ads? Become a Member.
From Around the Web
THE GASTRO OBSCURA BOOK
Taste the World!
An eye-opening journey through the history, culture, and places of the culinary world. Order Now