The Bird-Like Soviet Flying Machine That Never Quite Took Off - Atlas Obscura
Want to see fewer ads? Become a Member. 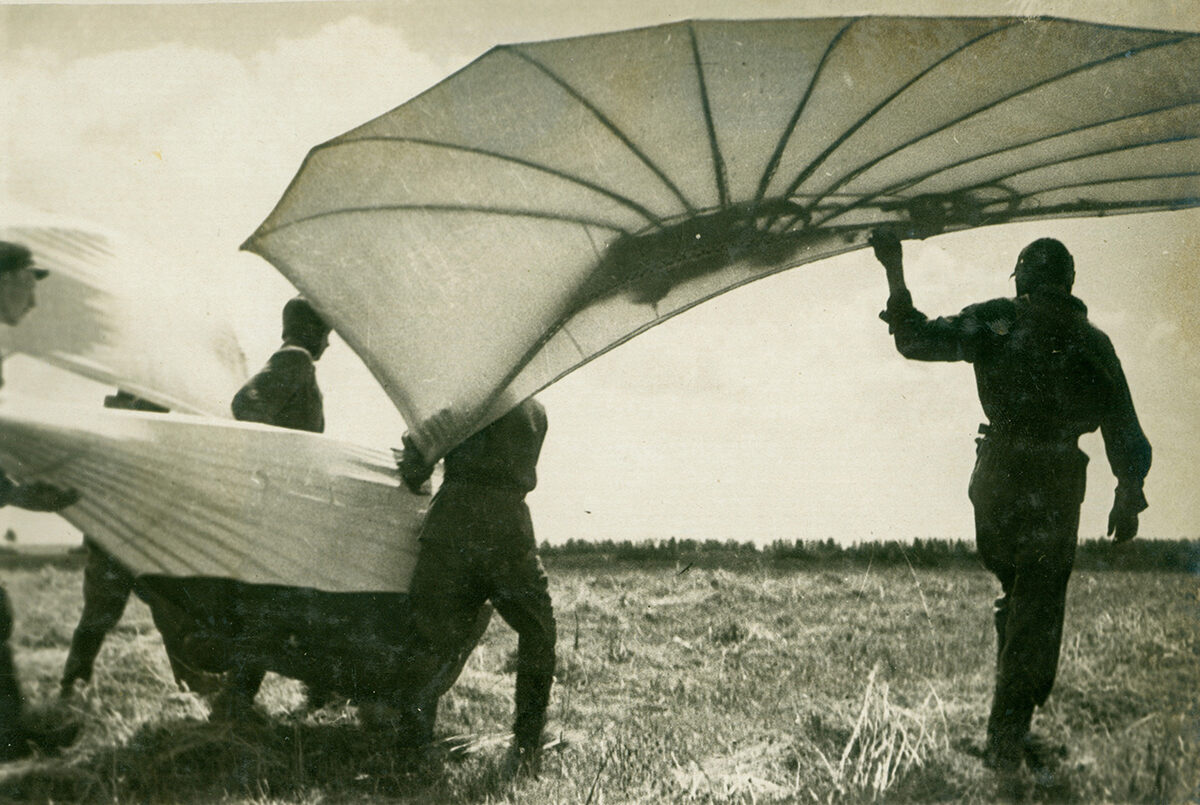 One day in 1932, Russian avant-garde artist Vladimir Tatlin ventured from his studio in Moscow’s ancient Novodevichy convent to a country field. After five years of work, he wanted to test what would become his final major creation: a human-powered flying machine.

The apparatus, named Letatlin, (an amalgam of his name and the Russian verb letat’, or “to fly”) consisted of a body basket for the human operator engineered of bent wood and wings spanning almost 10 meters (33 feet) across, sheathed with parachute silk. The bird-shaped contraption was held together with steel cables, leather and whalebone; custom-made metal bearings ensured efficient movement.

Three Letatlins were built, one left purposely as an uncovered skeleton structure for demonstrations: Tatlin expected that this particular model would be useful when industry adapted his design for mass production.

Passenger flights had already existed in Russia for a decade, and a factory in Moscow that year launched serial production of small civilian planes. But Tatlin envisioned his project would become a more tangible, household consumer item for the newly forged Soviet man, giving the masses access to affordable flying equipment that would make airborne commutes as common as bicycle rides. Soviet schools would hold classes for children on mastering the art of flight, he believed.

Tatlin was already in his late 40s at the time, having etched his name in the history of the avant-garde movement as the father of Soviet constructivism, the philosophy that art must construct the new material reality rather than exist abstractly for its own sake.

Tatlin’s projects ranged from the utopian to the mundane, including the tiered revolving Tatlin tower meant to house Communist party officials, an ultra-efficient stove that could heat the entire house with two logs, clothing, and even children’s sleds and sippy cups. Christened the Russian Da Vinci as the movement’s most polymathic member, Tatlin had nursed the idea of Letatlin in his mind since he worked as a sailor in his early 20s, observing seagulls.

“Letatlin is not just a symbol of avant-garde art but one of the entire Soviet era at that time, when there was a feeling that something entirely new was possible,” says Irina Pronina, an expert at the Tretyakov Gallery. It embodies the idea of takeoff and flight, the idea of freedom for the individual to be airborne, she says. “We don’t know the mechanics of flight on Letatlin, but it must be the same principle as flying in your sleep: the sensation of running and then suddenly lifting off the ground.”

Letatlin’s fate is also symbolic of the fate of the entire avant-garde movement, which was squashed by the Soviet government in the 1930s. The process of shutting down creative freedoms had already started by the time Tatlin got around to testing his creation, making it the swan song of avant-garde art in the Soviet Union. He was never able to get it off the ground—the field test had to be aborted due to damage during transportation that could lead the test flyer to crash.

Two of the models have been lost. One, with the exposed wings, miraculously ended up in Russia’s unique but overlooked Central Air Force Museum outside Moscow, an errant, underfunded asset of the defence ministry dedicated to the history of aviation which is kept alive largely by efforts of volunteers. Letatlin’s disintegration prevented it from being transported beyond the premises despite regular requests by major museums. The avant-garde idea of human freedom to fly as a bird was grounded at a graveyard of rusty machines.

“We don’t have the definitive answer to the question if it is possible or not to fly on the Letatlin,” says Pronina, who, together with colleagues, in October loaded the contraption onto three trucks to transport it to Moscow for eventual restoration. She says the fact that it survived decades of spartan storage conditions is a “miracle” and now a team of restorers is brainstorming for the right approach to rescue it from oblivion. “There are reconstruction methods, their supporters say we shouldn’t labor over rusty and torn fabric and use new material, but then the authenticity of this piece, which has its own life and wrinkles, like a human face, will also disappear,” she says.

Though Tatlin inspired generations of other artists, many of which are being showcased around the world as art museums commemorate the centennial of the 1917 Russian Revolution, his original works are rarely present in these retrospectives. “Many of his original works are no longer extant and exist only as later reconstructions,” say the curators of the current exhibit “A Revolutionary Impulse” at the Museum of Modern Art in New York.

Pronina hopes that a restored Letatlin can rekindle interest in Russian avant-garde art, which is mostly sidelined in its home country in favor of more conservative styles. “We want the interest in the avant-garde to go beyond the professional art community,” she says.

“Letatlin is like a wondrous bird, it does not leave anyone indifferent and inspires the simplest of questions: what is it? What was this artist dreaming of?”

Found: Historic Ketchup, Buried Under a Music Venue for More Than a Century

A golden bug worn on the lapel could indicate a life of adventure.
space exploration

Parked far from the runway, the dilapidated 707 is an artifact of Berlin's divided past.
ghost towns

The Iron Curtain escapee, DIY aviator, and thriving entrepreneur is ready for anything.
Video • Object of Intrigue