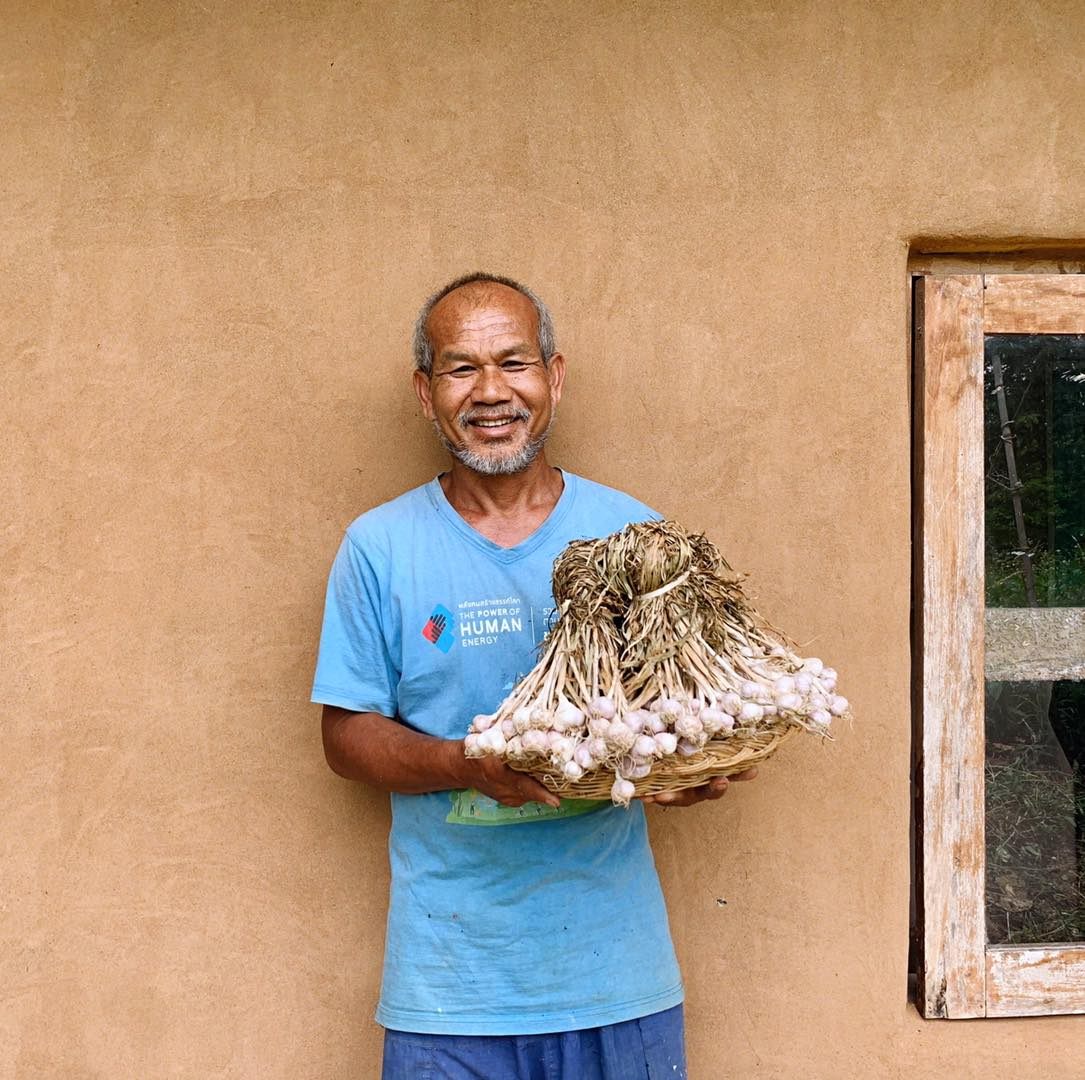 “Life is easy. Why do we make it so hard?” This is the question that drives Jon Jandai, Thailand’s self-proclaimed “happiness farmer.” In a country where more than 50 percent of the population now lives in cities and farmers face rising input costs, falling crop prices, and mounting debt, Jandai offers an alternative that has attracted more than 10,000 students: a life of self-reliance that consists of building earthen homes, learning to farm indigenous Thai fruits and vegetables, and growing more than enough food for yourself in a few hours of work a day.

Jandai grew up in an agricultural village in Northeastern Thailand where he recalls his family and neighbors working for two hours a day for only two months a year, leaving them time for post-lunch naps, monthly festivals, and plenty of self-reflection. As a young adult, Jandai worked as a security guard in Bangkok for seven years, where he was disillusioned by long hours, little pay, a cramped apartment, and a repetitive diet of noodles and fried rice. He returned home to recreate the agricultural life he missed, learning to farm organically—with a wide variety of Thai fruits and vegetables, in contrast to the chemically fertilized cash crops grown by most Thai farmers— and build his own house out of packed mud.

Over time, Jandai and his wife, Peggy Reents, built a community that grew their own food, constructed their own homes, and tended to their own ailments on nine acres of land outside of Chiang Mai. In 2003, they founded the Pun Pun Center for Self-Reliance on that land, formalizing their mission to share what they had learned. The center is also a thriving organic farm, half covered in forest and dotted with fish ponds and fruit trees. Jandai, who remembers eating more than 100 different kinds of plants in his youth—from flood resistant jasmine rice to enormous “pillow watermelon”—also spearheaded Pun Pun’s seed bank, which preserves and shares the seeds of rare and indigenous plants from Thailand and around the world. And to make his farming model more feasible for Thai farmers, he helped found Thamturakit, an organization that buys the excess produce of organic subsistence farmers at a fair price and sells it in cities.

When Jandai isn’t coordinating with farmers or teaching workshops on earthen home-building and organic farming, he spends time on Pun Pun with around 20 other full-time residents, including several homeschooled children. Members of the community work on the farm for a couple of hours a day, cook and eat collectively, and spend the rest of their days napping, chatting, and having fun. They earn less than Thailand’s minimum wage, Jandai says, but are economically secure because they spend even less.

When you grew up in Northeastern Thailand, were people living a life similar to the one you’ve cultivated at Pun Pun?

Quite similar. When I grew up, people didn’t use money much. People used the barter system a lot, because money was very rare. So we were just trading things.

And since we had no money, people helped each other a lot—like building a house. Anybody could have a house easily when I was kid; you just asked people to help you cut the tree and saw it into pieces and make it into a house.

What are some of the plants you have that are just delicious and hard to get otherwise?

One kind of cucumber has white skin and quite a good smell and a very good taste. I love that cucumber a lot. We call it dang hom. That’s one thing that I used to have when I was a kid, and then it disappeared for many years, and then I discovered it again. So we’ve tried to preserve it [through cultivation and seed-saving]. Another is a small eggplant that is very sweet and nice. When we eat it we chew it fresh. It’s a nice taste. Raw is even better.

Would you say that preserving the knowledge of how to cook vegetables is also a part of saving the vegetables themselves?

Yes. Many kinds of plants that we have are poisonous. If you eat them directly, you can die. Take a kind of white yam: Many people die from it. So you need to preserve the way to safely prepare it. It is quite complicated. You need to slice it very thin and then soften the slices with salt for a week and wash them three times with water every day for two weeks. And then after that, you put the slices in a basket and press them with something heavy. After seven days, when you cook them, it’s good. It’s very tasty. This kind of knowledge was preserved by our ancestors for many generations. Many people died for me to know how to eat these plants.

I’m trying to picture Pun Pun. Could you describe the environment ?

Pun Pun feels like a chaos community because there’s a lot of kids running around and many people talking and enjoying doing whatever they want. We are almost 20 people living together with no rules, no discipline, and no leader. But we rely on each other quite a lot. We grow food and we eat most of what we grow. And people have freedom. They can do whatever they want, they can go anywhere that they want to go because there’s no leader, so everybody feels free.

Why do you think so many people are drawn to the lifestyle at Pun Pun?

The “normal” life in the world is wrong because there’s no reason that people have to work 10 hours per day, every day. We work hard, we eat very bad. Who are we working for? I think people start to think, start to question this more and more. Now we work so much, but we don’t have a good life. Why do we keep doing this? So when [people] hear about the story of Pun Pun, they feel like, “I want to have a life like this.” I want to have free time, I want to enjoy my life.

Where should someone like me start if they want to live a simpler and happier life?

What is your hope or vision for how agriculture in Thailand will look 50 years from now?

I think it’s going to become more and more sustainable because of the pressure from economics, not because of the intention of farmers. Because now the price of everything is rising very fast, and the price of agricultural products is going down very fast. How can they survive if they don’t come back to a sustainable way of farming? You need to come back to the natural way because it’s cheaper, easier.

How Did a World War II Boat End Up at the Bottom of a California Lake?

You don't save agricultural traditions without swapping some seeds.
farms

Join us for a daily celebration of the world’s most wondrous, unexpected, even strange places.
farms

Trashed in the U.S., hop shoots are treasure in parts of Europe.
farms

From biscuits to cherry pie, these award-winning dishes tell family stories dating back to the 1800s.
List

At a Bangkok bistro, one pot of beef stew has been cooking non-stop for more than 45 years.
Bangkok, Thailand

An on-site urban farm and fish pond supply some of the produce for this upscale restaurant.
Bangkok, Thailand

A three-table eatery sits inside the home-kitchen of a seafood virtuoso in Bangkok's Chinatown.
Koh Kret, Thailand

Eat like a bird in a bamboo nest.
Want to see fewer ads? Become a Member.
From Around the Web
THE GASTRO OBSCURA BOOK
Taste the World!
An eye-opening journey through the history, culture, and places of the culinary world. Order Now