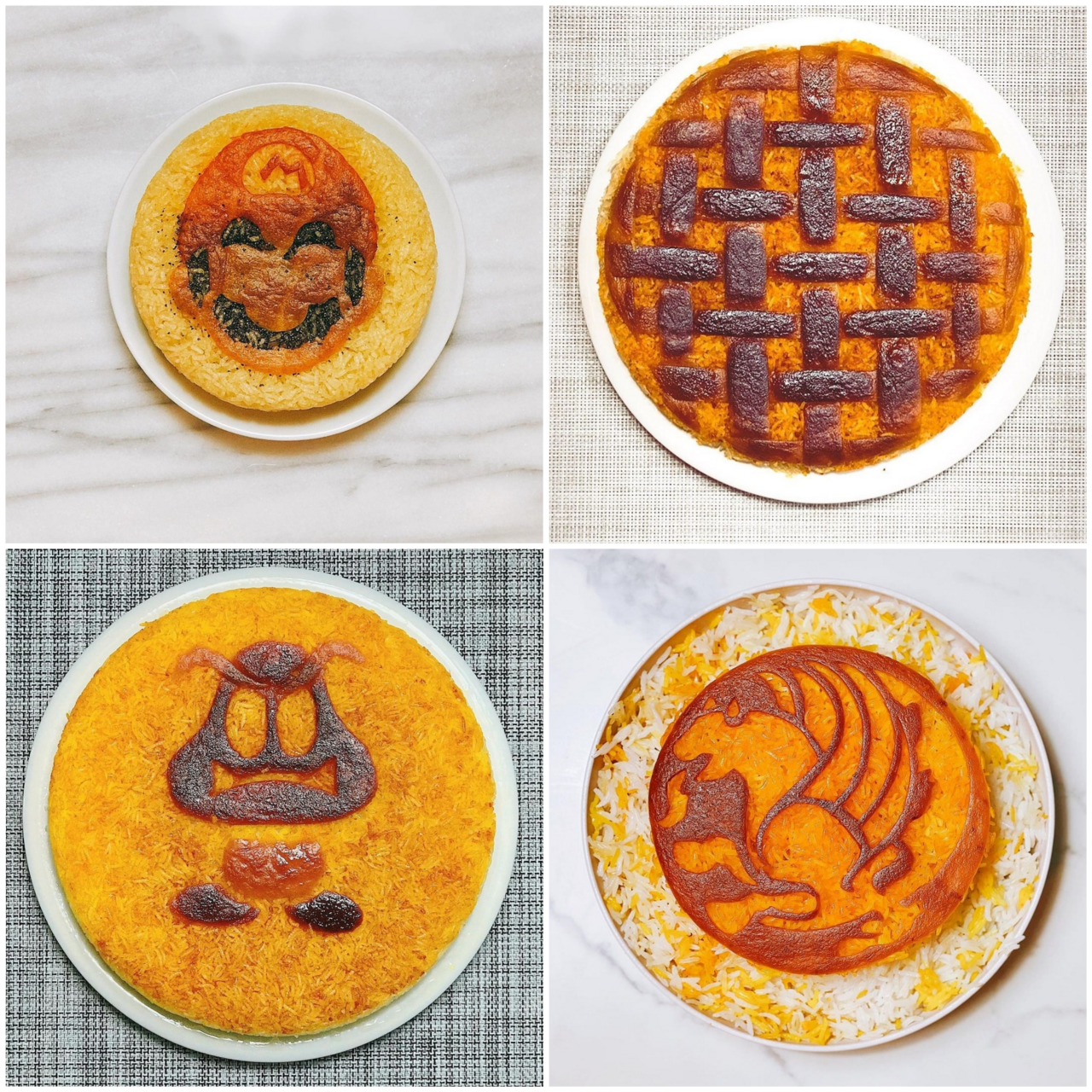 To make the simorgh (a mythical bird in Iranian mythology and literature), the baker-artist stenciled the shape out of a tortilla. All photos courtesy of Varta

What do Star Wars, the Last Airbender, and Super Mario have in common? According to one baker, they all belong on tahdig.

Varta is a Chicago-based baker and blogger. But what started as a food blog to introduce followers to Persian cuisine has transformed into an Instagram account that documents just how innovation and artistic tahdig—a traditional Iranian dish made of slightly burnt rice—can be.

“At the end of the day, it’s a fried carb, and fried carbs will always do well,” says Varta. “You take any sort of comfort food and you fry it, it’s going to be good.”

Born and raised in Virginia to Persian parents, Varta grew up in a household that revered Persian delicacies such as barbari, an lranian flatbread; gheymeh, an Iranian stew filled with cubed meat and veggies; and ghormeh sabzi, an herb and beef stew. Though tahdig was also omnipresent in her home, she was surprised at how quickly the dish gained popularity in Western culture.

“Growing up, you never saw a big focus on tahdig,” she says of Persian cooks who introduced the cuisine to American culture. “Little did they know that it was the crunchy rice that was going to make people go crazy.”

And crazy people have gone. Tahdig is one of the most recognizable dishes within Persian cuisine. It’s often found in intro listicles about Persian food, and is tagged in nearly 40,000 Instagram posts. According to Varta, the rise of tahdig and its popularity in Western culture can be attributed to the universal nature of rice.

Tahdig is “the perfect intro to Persian food because it’s something that everyone’s familiar with,” says Varta. “Every culture has a rice dish, or their version of rice. So something like tahdig is instantly recognizable.”

Though tahdig is an Iranian dish (it translates to “bottom of the pot” in Persian), scorched rice dishes are found throughout East and Southeast Asia, some parts of Latin America, and Spain. The ubiquity of rice—and of dishes that make a virtue out of the tendency of rice at the bottom of the pot to burn a bit—makes tahdig especially appealing to a diverse group of food enthusiasts that look to Varta’s page week after week. Varta, who has a steadily growing Instagram following, considers herself one of several Instagram cooks who has found ways to get creative with the dish. Having studied biology in college, the former medical graduate worked in a clinic to please her parents before finally leaving a career she wasn’t passionate about. She turned to fashion and cooking and what she knew and loved: Persian food.

“It was the comfort, it was what I was most familiar with,” says Varta.

Though Varta found comfort in familiarity, she also found excitement in creativity. Recalling the serious atmosphere that often surrounded dinners or parties where tahdig and other Persian dishes were served during her childhood, Varta opted to cook as a form of stress relief and fun. Rather than obsess over perfect presentations, she looked for ways to make cooking more enjoyable. This led her to combine character art with cooking.

“I was thinking, how do I make one that’s different [and] that someone else hasn’t done?”

When she began adding pop-culture characters such as Star Wars and Super Mario to her tahdig, she saw increased interest in her work. Although the initial response from longtime followers was a mix of excitement and shock.

“If you put that in front of a Persian dinner party,” Varta says of her cartoon-themed tahdig “they’d be like, ‘What are you doing?’ They wouldn’t get it, but it’s just fun.”

To make tahdig with character art, Varta first draws her ideas on paper—occasionally a few times until she gets it just right. She then uses the paper as a template to carve the design onto her tahdig. (You can find a video of her making one creative tahdig, using an exacto knife and a tortilla, on her Instagram.)

“Everyone has their own way of doing this, based on how you grew up, or how your mom made it,” says Varta. “I’m making it in the way that makes me happy.”

Varta doesn’t just make tahdig. On her page, she adds her twists to various dishes, such as pop tart versions of baklava and barberry chicken, her one-skillet version of zereshk polo ba morgh. Her range of abilities builds on prior food blogging experience from her collegiate days, and her Instagram page, launched in 2019, has been an important reset for her cooking journey. In addition to sharing images of her culinary endeavors, she sells Persian snacks including fruit leather (known as lavashak), cookies, biscottis, and candies. Her preparation isn’t always the most traditional, but it can be captivating.

Though Varta considers her work a lighthearted introduction to Persian cuisine, followers often ask how to make their own tahdig and are intrigued by the characters she introduces, such as Darth Vader, Goomba, and the beautiful Persian women who’ve been influential in her life. Though not a food historian, she often answers questions about Persian cuisine and culture from readers.

“Whenever you can take something that’s such a simple staple and have fun with it, people are going to notice,” says Varta. “People are always looking for ways to take the basic stuff in their life and make it into something special.”

This bakery sits on the site of the Black Panther's first headquarters.
Kearney, Nebraska

Inside this magical collection, you can buy recipes cooked up by church ladies, motorcycle clubs, and clowns.
Want to see fewer ads? Become a Member.
From Around the Web
Travel With Atlas Obscura
Are you a curious traveler?
Join local experts in 50+ destinations for a once-in-a-lifetime journey.
View Our Trips
Thanks for sharing!