How Do You Keep a Subway From Flooding in the Age of Rising Seas? - Atlas Obscura
Want to see fewer ads? Become a Member. 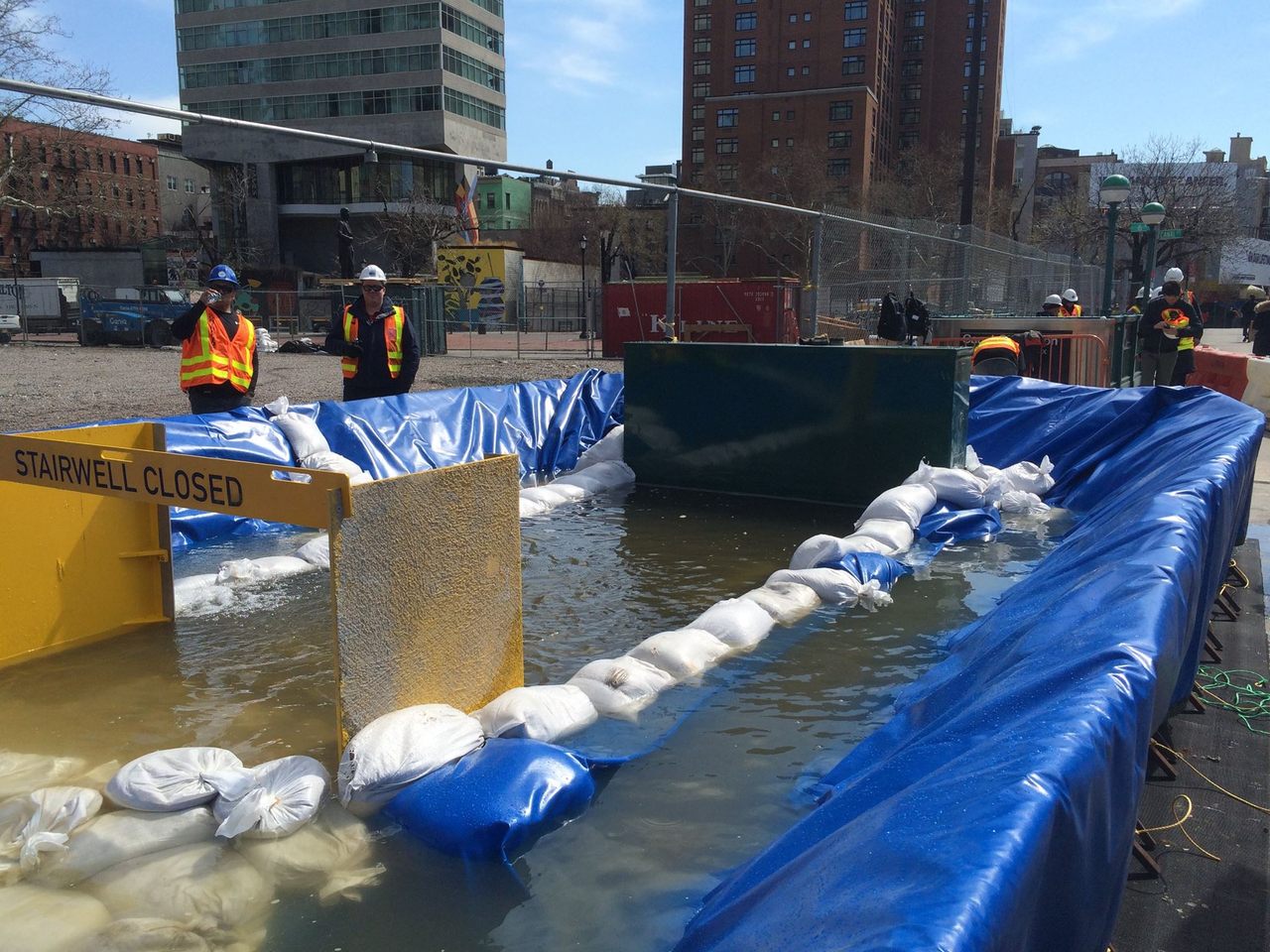 The flex gates to protect subway stations are tested with lots of water. MTA // CC BY-2.0
In This Story
Destination Guide

As the city of Venice continued to wade through its alarming floods, commuters half a world away in Brooklyn noticed something strange—a subway station flooded above street level, a sight that hadn’t been appeared since 2012, when Superstorm Sandy inundated nearly a dozen tunnels and many stations around the city. Except this station entrance was flooded on a sunny November day. It was no act of god, but rather a test to see if the city would be ready the next time around. The Metropolitan Transit Authority (MTA), like other major transportation agencies around the world, especially the ones that operate underground facilities in areas near the ocean, is deeply concerned about storm surges and rising seas.

“That was a hydrostatic test yesterday of a newly installed flex gate. The gate is tested with a head of water to make sure it is installed correctly,” says Shams Tarek, a deputy communications officer for the MTA. “The test was successful.”

Sandy had made a mockery of the largest subway system in the world, and the MTA alone requested $5 billion to both fix what was broken and plug things up where they could.

It wasn’t the entire station that was flooded at the Broadway station of the G train that connects Brooklyn and Queens. The water was being held back by a woven kevlar flex gate, a device developed by the engineering firm ILC Dover. In flooding events, these rolls of kevlar will be able to be unfurled from hidden receptacles attached to the signs that mark subway entrances. They can be pulled over the stairwell and attached to the highest step, to create a seal to prevent the worst from happening.

“Our barriers are impervious and designed to handle flooding as much as 16 feet deep,” says Dan Klopp, a product managing marketer at ILC Dover. “There can be some slight leakage at the interfaces between our barriers and the surrounding infrastructure, however this amounts to much less water ingress than would happen during a light spring rain shower.”

In an old subterranean system—a warren that runs throughout the city, full of closed stations, some of which offer tours, secret exits, underground artwork, and even an abandoned attempt at a pneumatic subway—where rain can lead to stalled trains, slippery floors, and leaky ceilings, such barriers are a new age solution: ideally both waterproof and tough as nails.

The barriers make the most obvious subway access points impenetrable, but water is a slippery foe. “These gates do not address the increasing stress of groundwater penetration into the subway, which is also likely to increase with climate change,” says Thaddeus Pawlowski, managing director of Columbia University’s Center for Resilient Cities and Landscapes. “Many of the streams that once flowed through the city are buried underground and find their way into the subway.”

Pawlowski says the MTA already spends considerable energy pumping it out and treating it. “Perhaps in the future, the MTA could adopt an approach of working with the water, rather than just keeping it out,” he adds.

The MTA began this expansive, high-tech plugging initiative with stations at the highest flood risk, due to their low elevation. The most at risk, such as the end-of-the-line South Ferry station in Downtown Manhattan, were fitted with larger, more bulbous “resilient tunnel plugs”—32-foot-long balloons that are like a cross between a blimp and an airbag.

Come for the Controlled Flooding, Stay for the Gumbo

As waters rise in Morganza, Louisiana, so does disaster tourism.
floods

The Wood screw pumps are mechanical marvels, but the turbines that power them are another story.
floods

Beavers can reshape the North American ecosystem—if we let them.
floods

The coastal community of Selsey welcomes the return of salt marshes where farms once stood.
Video