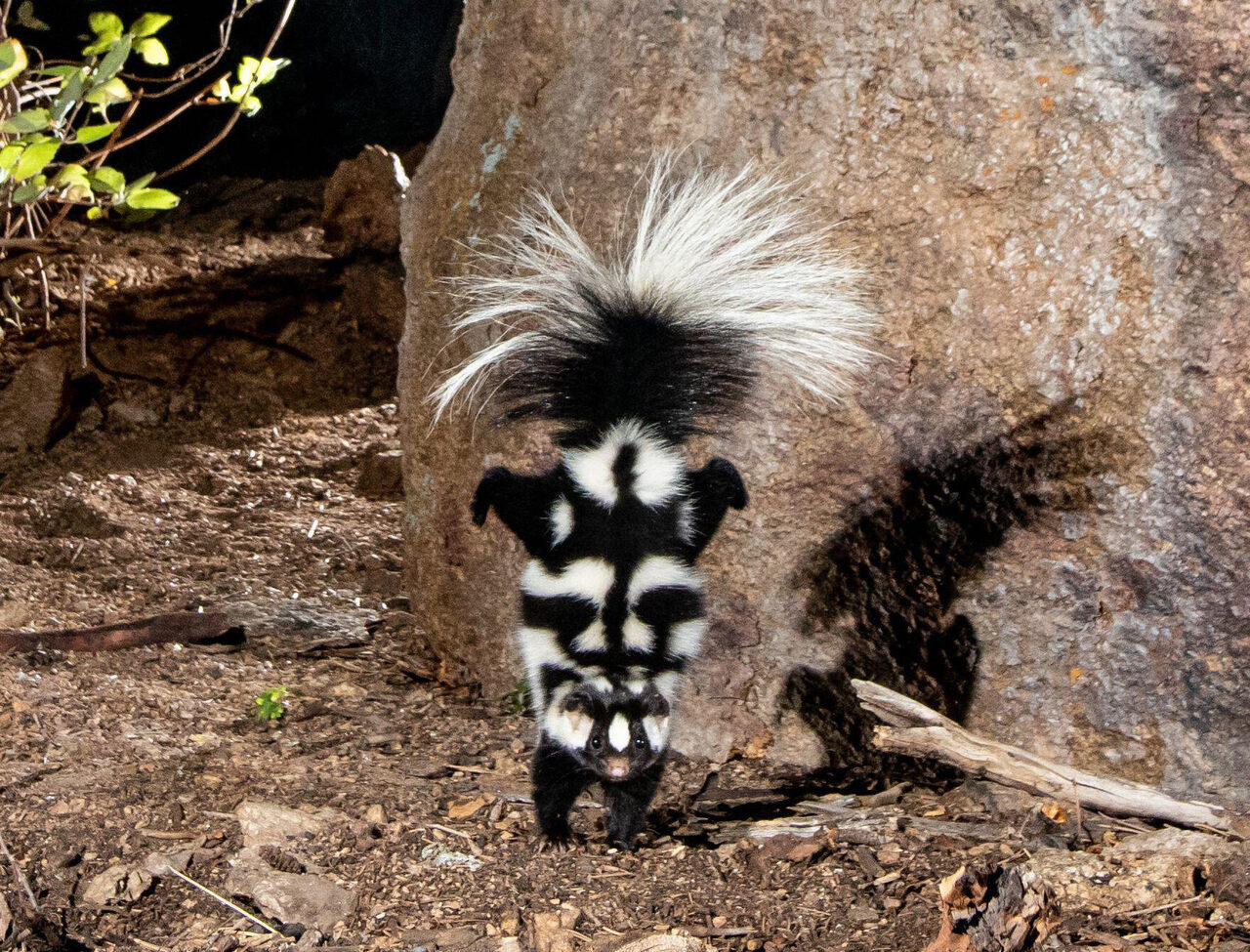 The posters went up all over Texas: Keep an eye out for this spotted rascal, considered armed and extremely odorous, and wanted dead or alive. The fugitive’s mugshot was, quite frankly, adorable.

Meet the charismatic, but sometimes stinky, spotted skunk. While all skunks douse would-be predators with a noxious spray, only the spotted skunk announces its intention to do so in a wholly ostentatious fashion: on its front paws, in a dramatic handstand with its tail skyward. The acrobatic posture makes the spotted skunk appear more than twice its size, potentially discouraging an attack. Spotted skunks can walk in this position and even stamp their front feet to seem intimidating. And if a potential predator still doesn’t get the hint, the skunk will drop back to all fours and spray with remarkable accuracy: They’re able to hit their target from up to 12 feet away.

Despite the theatrics, spotted skunks have remained a mystery to scientists—until researchers rustled up a posse to track down its family tree. Evolutionary ecologist Adam Ferguson was part of the team that came up with the idea of creating “wanted” posters, which helped the scientists collect scores of the critters and redefine spotted skunk species with greater accuracy than ever before.

For Ferguson, the new sorting-out of spotted skunks is an especially sweet-smelling achievement. “Everyone thinks we know everything about mammalian carnivores, so being able to redraw the skunk family tree is very exciting,” he says.

Ferguson has had a lifelong obsession with carnivores, or, as he refers to them, “things that have to kill to make a living.” As a child, he was fascinated by mountain lions and other charismatic predators. He eventually shifted his interest further down the food chain to smaller carnivores, animals that kill but also must worry about being killed. “That’s a hard life,” Ferguson says. “They’re definitely the underdogs.”

Underdogs in nature and understudied by scientists, small mammals became the center of Ferguson’s academic research, something he credits to mentors including Jerry Dragoo, a world-renowned skunk expert who runs the excellently-named Dragoo Institute for the Betterment of Skunks and Skunk Reputations. Dragoo is well suited to researching the animals: The first time he caught a live skunk was the first time he got sprayed—and also the moment he realized he had almost no sense of smell. In 1997, Dragoo rocked the field of evolutionary biology by declaring skunks were genetically separate from weasels and badgers, long thought to be members of the same family. Skunks, Dragoo said, comprised their own family; he named it Mephitidae, from the Latin word for a foul smell. Now, his mentee Ferguson has made a similar splash. Ferguson, the Negaunee Collection Manager of Mammals at Chicago’s Field Museum, and his coauthors concluded there are seven distinct species of spotted skunks—not four, as previously believed.

Spotted skunks live throughout North America—from British Columbia to Costa Rica—but aren’t easy to find. Five times smaller than striped skunks (the largest spotted skunk species are about as big as a squirrel), they’re nocturnal tree-climbers who make their homes away from the hustle and bustle of humans. As a result, people and spotted skunks rarely meet, so scientists have had relatively little data to reveal the pint-sized predators’ family tree. Over the past two centuries, the number of recognized species has ranged from two to 14, often based solely on the animals’ appearance and anatomy.

“The genus as a whole has never been properly analyzed,” Ferguson says. The “wanted” posters changed that. His team was able to acquire numerous roadkill specimens of the eye-catching (and eye-watering) animals (“They’re not the kind of roadkill people just paint over,” Ferguson says) and a few one-offs, such as a spotted skunk carcass that a rancher found floating in his livestock tank.

In addition to freshly deceased skunks, the team obtained DNA from specimens already in museum and other institutional collections. The grand total of 203 spotted skunk specimens “tells the full story of skunk evolution,” according to Ferguson. The hardest part, he says, was deciding when they had amassed enough to tell that story as accurately as possible. Says Ferguson: “You always want just one more.”

After analyzing tissue samples from each specimen and comparing DNA, the scientists reordered the genus into seven distinct species, including three that are entirely new. The seven species include the pygmy spotted skunk, the smallest of the bunch and also the first to split from the group’s common ancestor, about five million years ago. Ferguson says these skunks are so tiny, “you can catch them with a mouse trap.”

Another, the Plains spotted skunk, has experienced significant population decline. Its new status as a distinct species, says Ferguson, may make it “easier to conserve and protect.” Protecting all skunks should be a priority, he adds. Technically omnivores, skunks disperse seeds and eat injurious insects, as well as rats, snakes, and other animals that humans consider to be pests. Skunks are also important prey for larger predators.

And, for some enthusiasts, spotted skunks are just neat animals. Dragoo has lived with several rescue spotted skunks and reports they are lively, intelligent creatures. “They are very curious,” he says. And always a bit dramatic: Dragoo recalls when his pet spotted skunk chased his cat around the living room, all while walking on its front feet.

Dragoo is enthusiastic about Ferguson’s research and the attention it has brought the animals, but he calls the paper, “the latest chapter, but not the last” in the spotted skunk saga. Dragoo thinks there are even more species of spotted skunks, but that researchers will need to come up with more specimens—and perhaps more creative ways of collecting them—to figure it all out.

For his part, Ferguson is already on the trail of another genus of skunk for his next project. “I guess it’s kind of like Pokémon,” he jokes, “I gotta catch ‘em all.”

The Curious Task of Digitizing Darwin’s Beans and Butterflies

Scientists Are Simulating Mass Animal Die-Offs in an Oklahoma Prairie

The Secrets Hiding in the Simplest Animal Brains

One researcher thinks mollusks called chitons are more complex than they seem.
Video