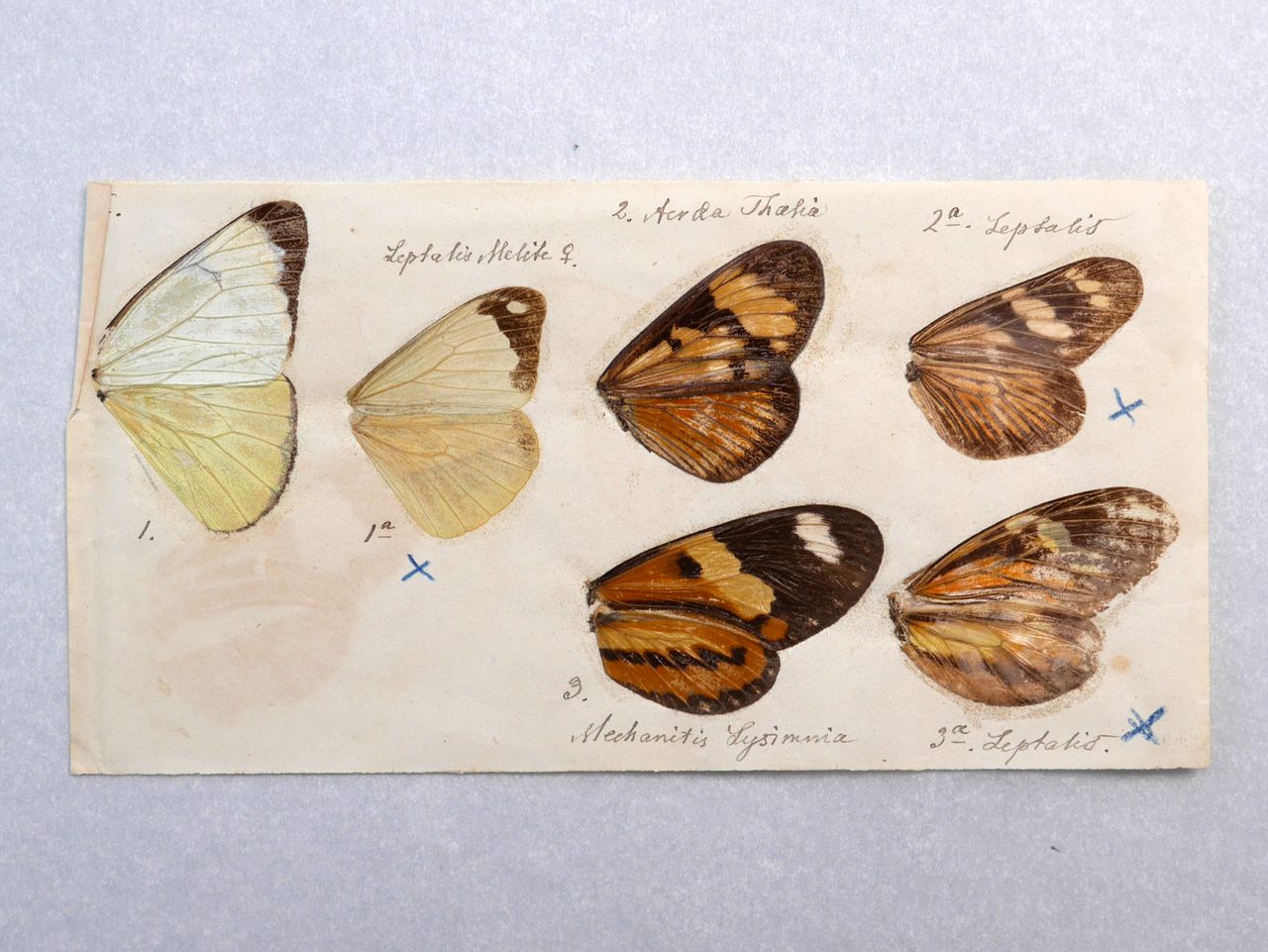 Butterfly wings from Fritz Müller. Reproduced by kind permission of the Syndics of Cambridge University Library
In This Story
Destination Guide

Emma Nichols never expected the beans to squeak. There were 392 of them in total, each concealed within brittle paper packets containing anywhere from one to 42 legumes of varying sizes and provenances. No one had paid much attention to them for more than a century, but now the beans needed to be sorted, counted, and preserved for posterity in the digital realm.

“I devised a method of cleaning them using a polyurethane sponge between some tweezers,” says Nichols, a Book and Paper Conservator at the Cambridge University Library. Beans, it turns out, have a tendency to go flying if not carefully held, so she used a silicone-tipped shaper, a tool more often found in the painter’s studio. Essentially a brush handle equipped with tiny silicon hairs for grip, the tool kept her tiny subjects locked in place while she primped and polished. “Much to the amusement of my colleagues, [the beans] made little squeaky noises.”

Squeaky beans may have inspired a few fits of giggles, but the task of conserving organic material for digitization is serious, occasionally even dangerous work. Conservation of the beans is part of the Darwin Correspondence Project, a massive undertaking to digitize thousands of Charles Darwin’s private letters. By 2022, the team aims to release a complete archive of the late botanist’s work to the public.

“The [Darwin] Correspondence Project has been busy making text of the letters publicly available to the public for quite some time,” says Alison Pearn, Head of the Darwin Correspondence Project. “For us, digitization is an essential part of preservation and of making it accessible to as wide an audience as possible.”

Darwin penned more than 15,000 letters to scientists, academics, and, critically, amateur gardeners that influenced his findings in On the Origin of Species. The vast majority of these are available only upon request, usually to academics or researchers. More than 8,000 of them reside in the Cambridge University Library, where they’re kept under tightly regulated conditions in order to slow their decay.

“[The letters] were hugely important, not only in terms of how he got information, but also because of the specimens,” Pearn says. Beans, butterfly wings, and other botanical samples that accompanied these letters provided Darwin with an enormous trove of data. “He couldn’t have published what he published without the correspondence that he conducted with around 2,000 people all over the world. In some cases, we only have one letter, but in some cases it’s conversations, some of which went on for decades.”

Among these samples, those humble legumes played a particularly key role. “In the case of the beans, it’s a really nice example of how Darwin worked,” Pearn explains. “He was interested in cross-fertilization, the mechanisms of which were not understood.” Darwin knew he couldn’t get all the information he needed without help. In 1857, he published a short article in the Gardener’s Chronicle, a weekly illustrated journal for horticulture enthusiasts, entitled “Bees and fertilisation of kidney beans.” He concluded by asking if readers could send him information about their experience.

“A guy named Henry Coe, who was in charge of a large garden attached to a mental asylum, had planted three types of kidney beans: one black, one white, one brown, and he sent Darwin some of these beans that were variegated,” Pearn says. As soon as Darwin saw the speckled beans with their visibly crossed genes, he wrote back that he would love to have some of the beans in question.

“The matter is altogether new and somewhat extraordinary and I am truly glad that you feel so great an interest in the subject, for I feel quite assured that an article from your able pen will elicit much information,” wrote Coe in 1858. So began an extended correspondence between the two men, as Darwin attempted to trace the ways in which the disparate colors passed between generations of plants.

“They had quite a conversation over several seasons,” Pearn says. “He asked Coe if he would do experiments on his behalf essentially. That’s not uncommon to the way that Darwin worked.”

Within his letters, Coe enclosed the packets of beans that would wind up on Nichols’s desk. By the time these kidney beans were ready to be cleaned and digitized, Nichols had to worry about them being a potential biohazard. Most of the bean skins sported a light surface mold, which could be either an innocuous byproduct of aging or a sign of something more lethal.

“We’re getting very used to having to think on our feet when we open packets of material that have been stored wrapped for decades,” says Anna Johnson, the Collection Care Manager. “The large institutions that collected botanical material in particular were in the habit of fumigating the materials with cyanide gas, mercuric chloride, or arsenic.”

Mercuric chloride, which was popular for preserving biological specimens in the 19th and into the early-20th century, is highly toxic, water soluble, and volatile enough that it can build up in the nervous systems of those even briefly exposed to it. All of the members of the Darwin Correspondence Project work with single-use tools and use UV light to scan for poisons. “At some institutions, they carry out regular testing to look for accumulations of mercury compounds in their staff,” Johnson says. “That’s at the more extreme end of conservation; we’re thankfully not quite there.”

Luckily, while the team has had a few scares over the years, such as a powdery white layer that looked like arsenic but turned out to be a colony of “mildew gone mad,” nothing has ever required a dash to the hospital. In the case of the Darwin Correspondence Project, the chief worry has always been damaging these historically significant objects. The beans are at the sturdier end of the spectrum, but other specimens, such as a set of butterfly wings from German natural scientist Fritz Müller, are terrifyingly delicate.

“The butterfly wings are at the extreme end of fragility,” says Anna Johnson, the Collection Care Manager. All of the coloring in butterfly wings lies in an intricate arrangement of scales on the exterior, almost like a Tibetan sand painting. Johnson was so worried about destroying them that she called up conservators at the Natural History Museum in London, who oversee the world’s oldest butterfly collection.“We’re taking steps to make digital surrogates the only means of access. [The wings] are still complete and we’re hoping we can preserve them for another several hundred years.”

Nothing lasts forever, particularly when it was once composed of living cells. Even the most skilled taxidermist or conservator will acknowledge that fur, feathers, and butterfly wings will ultimately deteriorate, no matter how much mercuric chloride or formaldehyde one uses. Someday, Darwin’s beans will be gone, but their digital imprint will remain for future generations who wonder about our changing planet.

“The butterfly wings may provide information about past climate. The Darwin letters are now used for all sorts of things that no one ever expected,” Pearn says. “One thing I would say about preserving something like the beans is that it may seem like an enormous amount of work for a very small part of the Darwin archive, but we don’t know what people will be able to do with this in the future.”

Including welding skills, knowledge of anatomy, and infinite patience.
science

The monstrous menace known as Whatcheeria hints that our distant ancestors may have been more like us than we thought.
museums

The clandestine government organization is digitizing its collection.
Video • Object of Intrigue