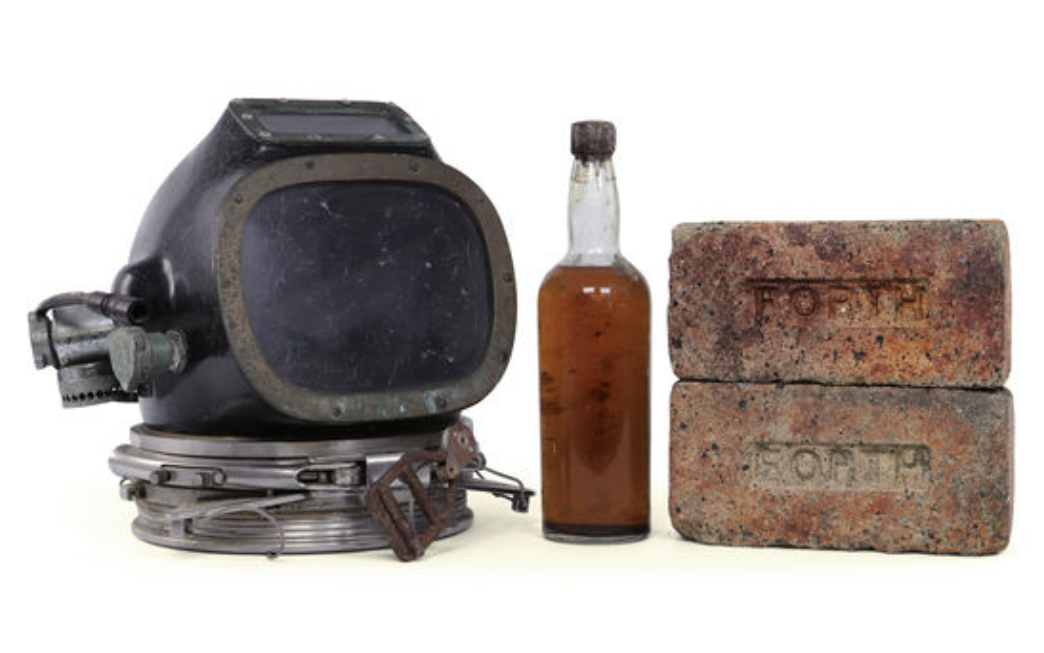 The full auction lot includes original bricks from the ship and a diving helmet. Courtesy The Grand Whisky Auction
In This Story
Destination Guide

In February 1941, a British cargo ship known as SS Politician was grounded and wrecked on a submerged sandbar off the coast of Eriskay, one of the islands in Scotland’s Outer Hebrides. On board were trade goods ranging from cotton to biscuits, en route to would-be customers in Jamaica and New Orleans. If, however, there was a marquee item among the ship’s inventory, it was surely the whisky—264,000 bottles of it.

There was so much whisky on board that—following an initial rush among locals to rescue what they could from the foundering ship—freeloaders would still be recovering bottles nearly half a century later, even after the ship’s hull was blown up and sunk to discourage more salvage (that is, looting). Some washed up on local beaches, and others were brought up by divers. One of the latter, found by professional diver George Currie in 1987, is now up for sale at Scotland’s Grand Whisky Auction, where bidding will close on August 10, 2020. At press time, the bottle was already going for nearly $8,000. Though the auction house warns unequivocally that the “bottle is not suitable for human consumption,” the winning bidder will also be treated to a diving helmet and bricks from the ship itself.

When SS Politician ran ashore it was wartime, rationing was in effect, and resources were scarce. It’s not hard to imagine, then, how excited locals were to descend upon the wreckage and retrieve as many bottles as they could—“by any means necessary,” explains Beau Wallace, director of the Grand Whisky Auction. According to a historical account in Scotch Whisky magazine, some men wore their wives’ clothing as they scavenged, so as not to stain their own with telltale spilled fuel. Others reportedly traveled from as far away as the isle of Lewis, over 100 miles to the north, to get in on the action.

Less enthused were British authorities, who had not only lost a vessel but also the revenues (and duties) from the cargo on board. Seeking restitution, they sent officers into villages to locate some of the missing goods, and some individuals were penalized. A comic, fictionalized version of the events serves as the basis of Compton Mackenzie’s 1947 novel Whisky Galore, which was also made into a popular movie in 1949, and again in 2016. The bottle currently on sale, says Wallace, represents “such a unique piece of history,”—or, at the very least, a unique piece of spirits history. “Every Scotch drinker knows about Whisky Galore,” he says.

The story didn’t end, of course, with the hull’s destruction, or with the cinematic makeover. There’s surely still some cargo floating around the Hebrides, and another diver had found eight bottles of his own, also in 1987. (A pair of those sold for more than £12,000 in 2013.) Currie never expected to discover his bottle. It was just “a lucky dive,” he says—all the luckier considering that the blasting of the ship was intended “to smash all the bottles.”

This bottle—and, indeed, this spirit—represents just one aspect of the legacy of SS Politician. For years following the wreck, there were reports of water-damaged banknotes—10-shilling Jamaican bills held in the same area of the ship as the whisky—turning up ashore and changing hands in banks. According to Scotch Whisky magazine, some 290,000 of these notes were on board before the wreck, worth more than $9 million today. After the notes showed up in Liverpool, London, and even the United States (among other places), the government announced in 1958 that 211,267 of them had been accounted for. That leaves tens of thousands that, for all we know, are still just drifting about.

Sold: A Set of 54 Whisky Bottles, One for Every Playing Card

Only four such sets are known to exist.
ships

It may still be safe to drink.
shipwrecks

For Sale: Gold From One of the Worst Shipwrecks in U.S. History

Much of the cargo is still missing, but for different reasons.
world war ii

For Sale: A Tricky Cipher Machine From WWII

A bronze sculpture of a monkey sits outside this factory, which has made an anise-flavored liqueur for over 150 years.
Want to see fewer ads? Become a Member.
Related

Dickens spent the days before his death counting casks of whiskey.
Read more
Thanks for sharing!