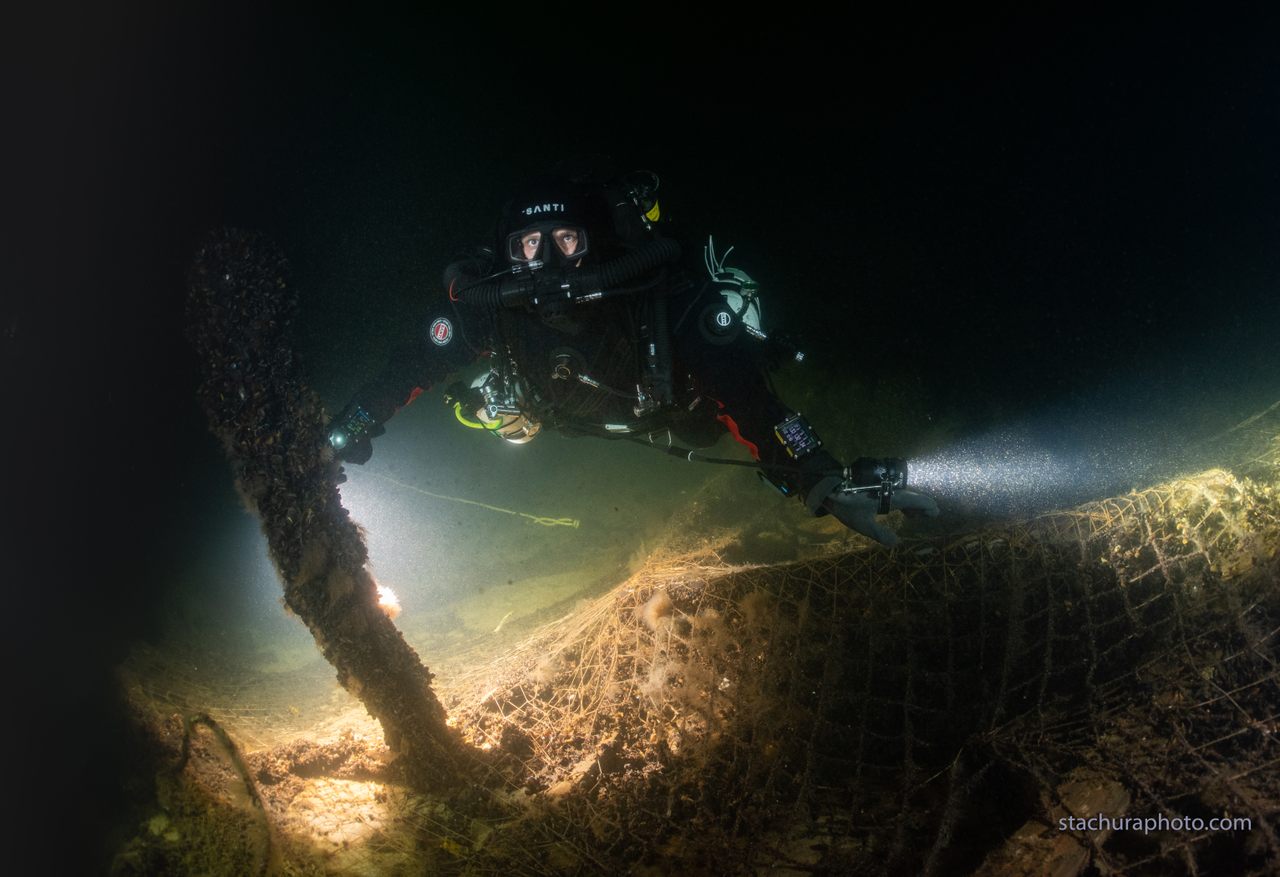 About 40 miles off the coast of Poland, nearly 300 feet below the surface of the Baltic Sea, a beam of light cut through the cold water and fell onto the metal hulk of a ship. As the light panned across the wreck in September 2020, it cast long shadows across the seafloor. For the first time in 75 years, the Nazi-era steamship Karlsruhe had been seen by human eyes.

“It is one of the last unresolved mysteries of the Second World War,” says Tomasz Stachura, the president of the SANTI diving company and a technical diver who dove on the wreck last month. The steamer “carried quite a large load and was an utterly submerged story … This story must be completed.”

Two German ships called Karlsruhe sank in the Baltic during World War II—one at the beginning of the war and one at the end. Remarkably, both were identified only this year. In September, the German cruiser Karlsruhe—which was sunk in April 1940—was identified off Norway’s southern coast. The same month, to the east, Stachura’s team dove on the German steamer Karlsruhe, which was sunk in April 1945. At the time, Germans were fleeing the Red Army, which was pushing through occupied Eastern Europe and into German territories such as East Prussia.

Germany’s hasty flight was part of Operation Hannibal, one of the largest sea evacuations in history. During the last five months of the war in Europe, millions of Germans moved westward, as did cargo that was deemed valuable or useful to the war effort—which was looking increasingly grim for Germany. So far, finds from the shipwreck include well-preserved military vehicles, china, and many sealed wooden boxes in the ship’s hold, which require more thorough excavation to unpack and study.

It’s not just in Indiana Jones movies that Nazi crates are cause for intrigue. According to SANTI, Karlsruhe was the last ship to leave the port at Königsberg, the historically Prussian city that is now Kaliningrad, Russia, which has led Stachura to speculate that Karlsruhe may have spirited away the ornate Amber Room of the Catherine Palace in St. Petersburg. Originally built in Berlin at the beginning of the 18th century, the room was an ostentatious ensemble of gold leaf, mirrors, and several tons of amber. In 1716, King Frederick William I of Prussia gifted it to Peter the Great of Russia. In 1941, it was dismantled by the Nazis, brought to Königsberg, and then—like many of the war’s looted artifacts—it vanished.

While some say the room’s extravagant panels were destroyed in bombings, some still hold out hope that the room is intact—hidden away somewhere, or collecting barnacles at the bottom of the sea. “We do not have any hard evidence that the Amber Room is there, but nobody has any hard evidence that Amber Room is elsewhere,” Stachura says. “The truth is that the Germans wanting to send something valuable to the west could only do it by means of Karlsruhe, as this was their last chance.”

Diving on the wreck is laborious: Twenty-five minutes on the site requires two and a half hours of decompression, Stachura says, and his team is seeking funding from the Polish Maritime Office to continue its work. The physical exertion of diving and opening the crates at such a depth carries the risk of blackout, and Stachura says that a diving bell would be needed in order to have enough air for the work. For now, the crates have been photographed underwater, and his team can hardly wait to learn more about their contents. “All we have to do is look into them and check,” Stachura says. Perhaps easier said than done.

From a Nazi code machine found at the bottom of a bay to a vintage Babe Ruth card hidden in a piano.
objects of intrigue

Found: A Nazi 'Enigma' Machine at the Bottom of a Bay

The rust-encrusted device was likely abandoned at the end of World War II.
shipwrecks

Winning bidder take note: It is not safe to drink.
cemeteries

But not for much longer.
Video • Object of Intrigue