Meet the Man Who Walked from York to Hastings in Medieval Armor - Atlas Obscura
Want to see fewer ads? Become a Member. 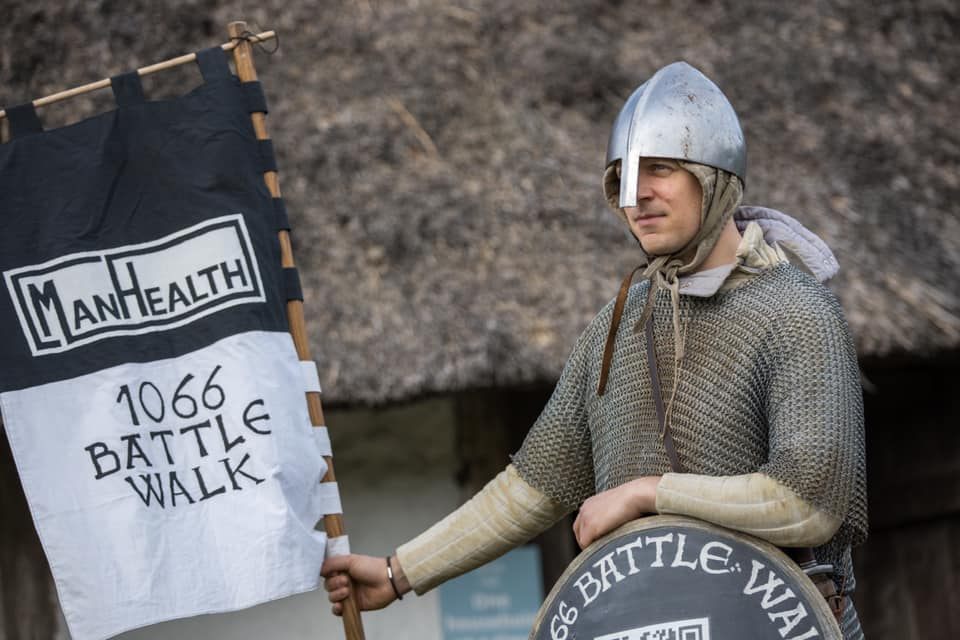 If you were driving through the English countryside sometime in October 2020, you may have spotted a man in a full suit of medieval armor, marching along the side of the road. It was neither a present-day Don Quixote nor a lost LARPer. It was simply Lewis Kirkbride, a 38-year-old charity worker from Durham, in northeast England. Turning heads, in fact, was precisely his goal. Over 20 days, Kirkbride walked some 300 miles to raise awareness of the English population’s widespread, if largely undiscussed, struggles with mental health—struggles he likens to battles fought by the knights of yore. One particular knight, as it happens.

Kirkbride modeled his route after the one taken in 1066 by King Harold Godwinson (or Harold II), the last Anglo-Saxon king of England. On September 25 of that year, King Harold met invading Norwegian forces at Stamford Bridge in Yorkshire and won a decisive victory. Even Norway’s own King Harald (it’s easy to get confused) was killed in the action, along with Godwinson’s exiled brother Tostig, who had supported the Norwegian invasion. The victors, however, couldn’t celebrate for long. Immediately after the battle, on September 27, William the Conqueror set sail for England with his Norman fleet, and Harold II had to move his forces south to confront the new invasion. Less than three weeks after his great victory, King Harold was killed at the Battle of Hastings on October 14, and the Norman rule of England began.

For Kirkbride, there’s a “perfect” metaphor for mental illness built into the story. Harold was “defending his kingdom from all sides, from invaders, and I think sometimes mental health can feel a bit like that—you’re just besieged from all sides and everything seems to be going wrong,” Kirkbride explains. Additionally, he points out, “there’s the metaphor of putting the armor on every day and knowing that I’ve got a 20-mile slog ahead of me … ” Part of the experience of combating mental illness, he says, “is putting on a brave face every day.”

The march itself required a brave face and then some. To prepare, after a former reenactor donated the suit to his project, Kirkbride took short walks around his hometown wearing it, all four-and-a-half stones (63 pounds) of it. He quickly learned that he would have to remain ultrasensitive to the metal’s hold on his body. “[T]he slightest irritation can become a blistering sore,” he writes in an email, “or the slightest misalignment can become a ballooning swollen and stiff joint.... I knew a five-minute adjustment could mean the difference between completing or aborting the challenge in a few days’ time.”

Kirkbride also tried to reconstruct what King Harold’s route would have been, then drew his own as close as possible to it—without denying himself access to food and accommodation, and without putting himself in harm’s way on unwalkable Roman roads. The journey ultimately took him, to name just some of the locales he passed through, from Stamford Bridge to Bubwith, Lincoln to Peterborough, and Royston to Battle, the site of Harold’s defeat. Adding to the Englishness of his mission was the near-daily rain, though Kirkbride came prepared for the mud with a walking spear.

Kirkbride, a longtime medieval enthusiast whose work sometimes brushes on issues of mental health, had been considering this trek since October 2019. He ultimately made up his mind, however, in April 2020, when he was taking a walk and happened upon a memorial for a local man who had taken his own life. “I discovered that around one in three people I chatted to from villages around home had lost someone … to suicide,” he elaborates. He partnered with ManHealth, an organization that helps men combat mental illness, and hoped his march would raise £10,660 (more than $13,700) in a nod to the year of Harold II’s greatest victory and subsequent death. As England learned more about his plans, Kirkbride shattered that goal, ultimately raising more than twice that amount.

Indeed, what Kirkbride planned as a solitary march quickly became a communal effort, with supporters glomming on like he was a plodding Forrest Gump in a metal helmet. When COVID-19 lockdowns nearly scuttled his departure, fans offered to smuggle him from home to his starting point in a caravan. At Peterborough, a historical reenactor playing a priest gave Kirkbride a knight’s blessing in front of the cathedral. Others, posing as Normans, followed Kirkbride into Sawtry on horseback. “By the time I reached the finish line” he writes, “I turned around and realized around 300 to 400 people had joined behind me in a socially distant procession!” Breaking character, Kirkbride had packed an iPod for the trek. He says he never used it once.

Kirkbride is an experienced reenactor himself, trained in medieval German sword fighting (“nasty stuff,” he says, and deadly) and a regular performer in staged reenactments at English historic sites. He hopes that his effort can be a shining example for destigmatizing mental illness. “One of the messages I wanted to get across was, ‘Well look, if a 6’2” trained killer in armor can talk about mental health openly, hopefully it’s okay for anybody else to,’” he says. “It’s not unmanly, it’s actually quite a brave, courageous thing to do—to show some vulnerability and reach out when you need it.”

Once a Boom Town, Now a Ghost Town, Always a Hometown

Expressing your identity in a clever string of images was a thing long before emojis.
medieval

A crusty, dense bread got the country's hardworking equines through long days.
science

Hint: It involves way less meat than you might think.
ruins

Inevitable decay and sudden explosions are just two of the threats to the centuries-old buildings.
Video

4:19
Want to see fewer ads? Become a Member.
From Around the Web
Atlas Obscura Trips
Southern England: Lore of Dartmoor
View This Trip
Thanks for sharing!