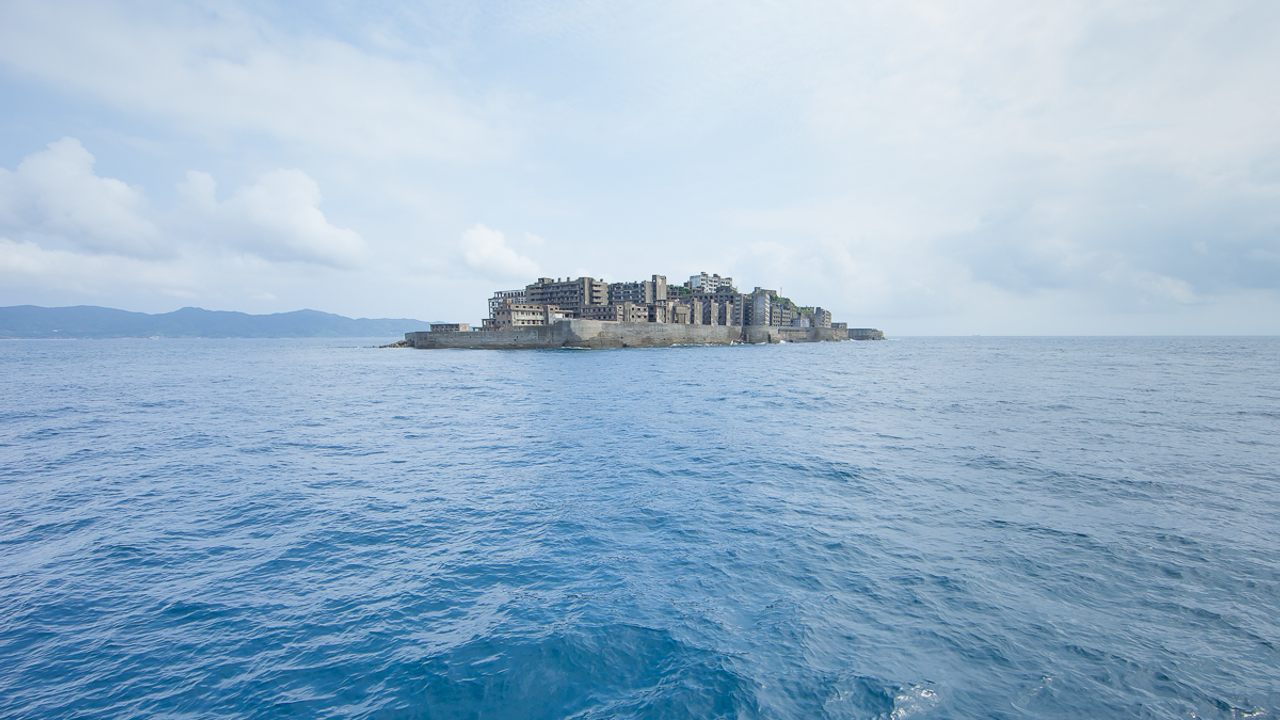 From this vantage point, the “battleship” nickname is well earned. All Photos: Wil Kuan

Filled with Japanese tourists in straw hats and a handful of gaijin, or Westerners, the cruise ship plied through the calm waters of the South China Sea. I was on my way to Japan’s Hashima Island, a long-abandoned 16-acre island nine miles from Nagasaki. Most people today refer to it as Gunkanjima, or Battleship Island.

Now derelict, Hashima was once a booming undersea coal mining facility that Mitsubishi Corporation developed for nearly 90 years. The city experienced its heyday in the period following World War II, with its population peaking at 5,259 in 1959. But beginning in the 1940s, many workers were not there by choice: they were laborers from Korea who were forced to toil under brutal conditions.

Surrounded by an ocean in every direction, this dense urban environment consisted of every facility needed to support the population—restaurants, barber shops, schools, swimming pools, even pachinko gambling parlors. Workers returned to looming 10-story concrete apartment blocks at night.

After skirting Hashima’s encircling sea wall, my fellow passengers were taken to an open area for tour guides to explain the history of the island in Japanese and English. We were unfortunately prohibited from going off on our own.

In 1970, only 12 round trips per day to Nagasaki were available. Did inhabitants try to take off to Nagasaki as much as possible? Or did they have to adjust to living within the confines of a 16-acre island?

Hashima’s economic existence ended in 1974 when coal was toppled by petroleum and gas. A rapid exodus followed, and from 1974 to 2009 the island was closed to the public. It opened for tours in 2009, and in 2015 joined the UNESCO World Heritage list as part of the Sites of Japan’s Meiji Industrial Revolution: Iron and Steel, Shipbuilding and Coal Mining grouping, stirring controversy due to the associated forced labor policy of WWII prisoners.

Many people seem to look past this dark side of Hashima, however, as this island is perhaps most well known as the location of the villain’s lair in the 2012 Bond film Skyfall.

Walking back towards the ship at the end of the tour, I was surprised at how little nature seems to have reclaimed the urban land over the past decades. The amount of green is not as extensive as I would have thought given more than 40 years in isolation. Though bushes and trees do show up on the few hills around the island, with a few peeking above the roofline of a few buildings, the solid concrete walls still dominate the surroundings.

After boarding the tourist cruise ship for the return trip to Nagasaki, our vessel took a final lap around the island. From a certain perspective, the “battleship” nickname is fitting as the island does resemble a prototypical battleship from the WWII era, turrets being replaced by lone buildings on top of the few hills in the middle of the island. This “battleship” name reportedly arose due to its resemblance to an incomplete Japanese battleship of the 1920s.

Even with the broken window frames and holes in walls showing some sign of decay, Hashima still gives the visual impression of a lonely grey fortress floating adrift in the sea.

It can be yours for a mere $2.8 million.
visualphotographyislandsabandoned

Lucas Bustamante wants you to fall in love.
abandoned

Matt Lambros is inspired by abandoned theaters—and their potential for revival.
Video • PinDrop