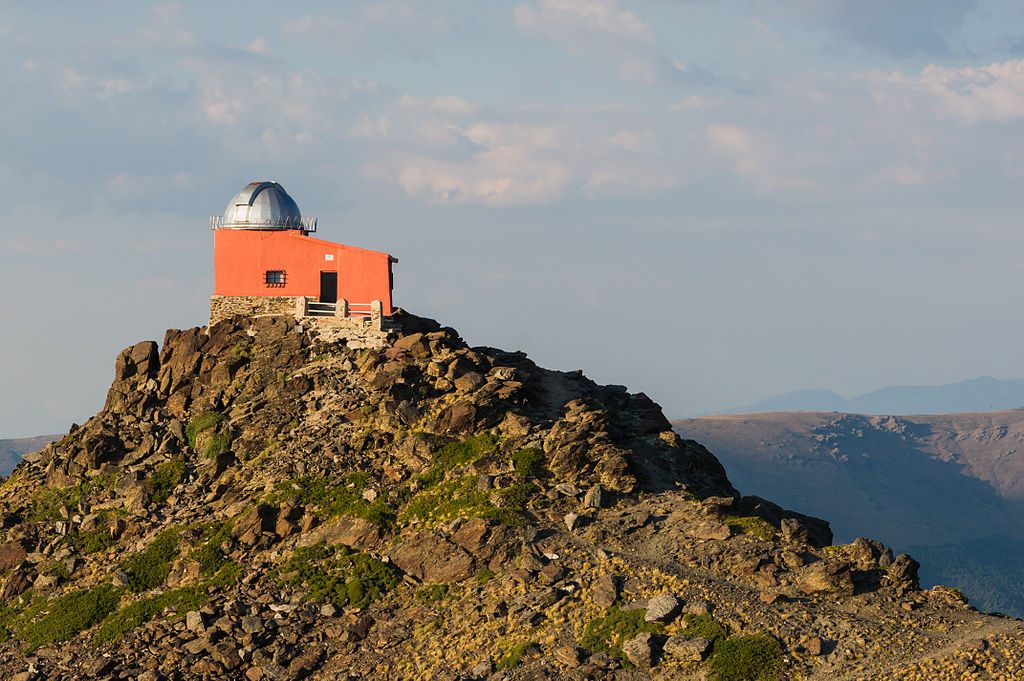 The haunting ruins of a military fortress turned astronomical observatory sit on a Sarajevo mountaintop.
Place

If astronomy had a ghost, it would look like this observatory.
Place

When this test site was abandoned, they didn't even bother to take the rocket with them.

Our relationship with the stars stretches back to the first person ever to look up and wonder, what’s up there?

The answers have varied over the years—God, aliens, TV satellites—but sometimes our understanding outstrips our equipment. Painstaking preparations and research become obsolete overnight, leading us to drop projects and abandon facilities in pursuit of the newest understanding. From Depression-era observatories quietly deteriorating in the woods to discarded space shuttles in rusting warehouses, this guide explores a few of the mysterious and fascinating ruins in the Atlas leftover from decades of out-of-this-world ambitions.

The Orion Astronomical Society established the Čolina Kapa Observatory and worked hard to bring it up to state-of-the-art technological standards. By 1972, it was the only facility of its kind in Bosnia and Herzegovina, its three domes crowning the building waiting for astronomers to observe the night sky. Unfortunately, two decades later in the 1990s much of Sarajevo was devastated by shelling during the Bosnian War. The Čolina Kapa Observatory and all its instruments were completely destroyed between 1992 and 1995 and the building abandoned. Today, though the walls are crumbling and decrepit, the tower remains an important symbol of Sarajevo.

However by the 1970s the clear mountain air had been tainted by light pollution from the surrounding cities, and increasingly obsolete equipment led to the abandonment of the building. The telescopes were moved by the Insituto de Astrofísica de Andalucía to the more modern Observatory of Sierra Nevada in Loma de Dilar, and Mohon del Trigo came under the auspices of the University of Granada, a lonely magnet for graffiti artists and explorers.

Ascension Island is a tiny, British-controlled volcanic rock, known for its sea turtle nesting sites, British military presence, and a successful mid-1800s experiment in terraforming. It also played a small but important role in the Apollo manned missions through its NASA-run Deep Space station.

In 1962, NASA, working with the British government, established a tracking station to support the Surveyor Deep Space missions. Ascension Island was on a flight path between NASA’s Johannesburg and Spanish tracking stations and an important communications point.

The station was a collection of concrete buildings and satellite dishes nestled between the island’s volcanic peaks, charmingly named Devil’s Ashpit, which shielded the instruments from radar interference.

In 1965, the race to the moon intensified, and NASA expanded the Devil’s Ashpit tracking station into an integrated Deep Space Station with two independent 30 foot antennas, capable of simultaneously supporting Apollo and deep space missions. It was one of the fourteen land-based Apollo tracking stations of the Manned Space Flight Tracking Network.

The island’s landing strip was extended in 1964 to allow for the emergency landing of a space shuttle, but was never used. The station remained in operation for 20 years, until it was deemed no longer unnecessary and abandoned in 1990. Today the buildings remain; one is now the headquarters of the local Boy Scouts. Visitors are free to drive out to the site, walk around and explore while enjoying the seabirds, sport fishing, and lava caves of the remote island.

The remains of the abandoned Gun from Project HARP in Barbados. (Photo: Brohav/Public Domain)

In lay terms, the HARP project was established to create a cartoonishly large gun to shoot things into science into outer space. Designed by mad ballistics engineer Gerald Bull, the gun itself was originally built from a 65-foot long, 16” naval cannon, the kind that might be seen on a battleship. It was part of an initiative to research the use of ballistics to deliver objects into the upper atmosphere and beyond.

Similar guns were built in locations across the United States, however the sole surviving fruit of the project is the massive, toppled gun barrel at the Barbados test site. The Barbados gun was abandoned in the late 1960s and left to rust on its original launch site and after years of neglect looks more like a painted sewer pipe than a Godzilla-size gun barrel.

(Photo: Worapong Art Soodsamai/Public Domain)
Built in 1937, this former space-gazing site was once owned by Indiana University. Professor Wilbur A. Cogshall oversaw the construction of the round stone keep on the then-outskirts of Bloomington. The observatory’s plain walls, practical rotating dome (the rollers are still visible though now rusted into place), and unpolished wooden floors show the influence of a pragmatic, no-frills mind.

After the observatory was finished, a 24-inch Schwarzchild telescope made by Gaertner Scientific was installed, and functioned for several years. Unfortunately, light pollution from expanding nearby cities, new technologies, and Professor Cogshall’s retirement led to the observatory’s abandonment in the mid-1940s. In 1965, the telescope frames and mounts were bought by the founders of the New Jersey Astronomical Association (NJAA). They refurbished the equipment in their backyards and installed the frame and mounts in New Jersey’s Paul Robinson Observatory, where they remain today.

Stripped of its equipment, but still showing its sturdy roots, the Knightridge Space Observatory currently stands alone in the woods, its dome open to the elements due to damage from fallen logs.

6. Missile Silo of the Everglades

An abandoned NASA rocket at the silo. (Photo: Brett Levin/CC BY 2.0)

During the glory days of the Space Race, when the U.S. government was throwing money at anything that would give them an edge in the race to the stars, rocket and missile propulsion manufacturer Aerojet General decided on a bold move. Gambling that NASA would choose solid over liquid fuel for the Apollo missions’ Saturn 5 rockets and hoping to score a lucrative government contract, Aerojet secured funding from the U.S. Air Force, acquired cheap land out near the Everglades, and built a rocket manufacturing plant. They dug a 150-foot silo to test the rockets (the deepest hole ever made in Florida). Also, since the rockets were so huge they could only be transported by barge, the company dug a canal (including constructing a drawbridge) from the plant to the Atlantic ocean.

A few tests were done, but all this effort became useless overnight when NASA decided to forgo solid fuel and use liquid fueled rockets instead. The silo shut down in 1969. Now the facility has been barricaded and welded shut—with the rockets still inside.

Easier to visit than many abandoned space relics, Cooper’s Island in sunny Bermuda used to house ammo bunkers and underground storage tanks during World War II. In 1960, NASA built a tracking station there to keep tabs on all the manned missions. This station was another member of the Manned Space Flight Network.

Outside of Cape Canaveral, the Cooper’s Island station was the most important of the 15 Mercury Space Flight Network ground stations. The Mercury Atlas rockets’ flight paths were almost directly over the island, which allowed an essential 25-second observation window as the rockets ascended into orbit. The station provided the vital “Go/No Go” to Cape Canaveral. Within 25 seconds after a rocket’s launch, the station would observe its trajectory, and based on their observations allow the rocket continue into orbit—or tell it to abort the mission, fire retrorockets, and splash down safely in the Atlantic. The station remained in operation through the Mercury, Gemini, and Apollo missions, but NASA closed up shop in 1997 after space shuttle modifications made the base unnecessary.

The eastern end of Cooper’s Island has become a wildlife refuge, opening to the public and under active restoration since 2009. As of May 2013, one of the NASA radar towers has been converted into an ideal birdwatching station.

Baikonur is the largest and most famous of the former USSR’s space race bases—the launching site of Sputnik, Yuri Gagarin, and modern-day cosmonauts. Parts of the base are still active, and since the retirement of NASA’s shuttle program in 2011, serves as the only launch point for all manned missions to the International Space Station.

The site also houses a museum full of famous Space Race memorabilia, including preserved cottages that once housed Yuri Gagarin and Sergey Korolev, lead engineer for the Soviet space program. Yet oddly enough, while the base continues to welcome tourists and send astronauts from across the world into space, much of Baikonur and the town surrounding it is deteriorating.

Launch of the Soyuz TMA-16 in 2009 at Baikonur Cosmodrome. (Photo: NASA/Public Domain)

Large swaths of Baikonur are deserted, leaving acres of unused launch pads and miles of pipes exposed to the desert air. Among the abandoned warehouses is much of the equipment for the cancelled Buran Space Shuttle Program, including shuttle prototypes and a massive multi-ton shuttle transporter. The only Buran shuttle to actually make it to space was destroyed in a hanger collapse in 2002, an accident that also killed seven technicians.

The Russian government doesn’t appear too keen on updating Baikonur either, and the $155 million yearly rent they pay Kazakhstan for the site has long caused friction between the two countries. In January 2011, ground was broken on the Vostochny Cosmodrome in Amur Oblast, in the Russian Far East. The new cosmodrome will reduce the Russian space program’s dependency on Baikonur, and allow it to launch missions from Russian soil by 2018. Vostochny, while bringing employment and infrastructure to a relatively undeveloped region, seems to spell the end of the Baikonur era.

My Mom Grew Up in a Utopian Colony in Iowa

10 Ruins of the Pursuit of Super Science