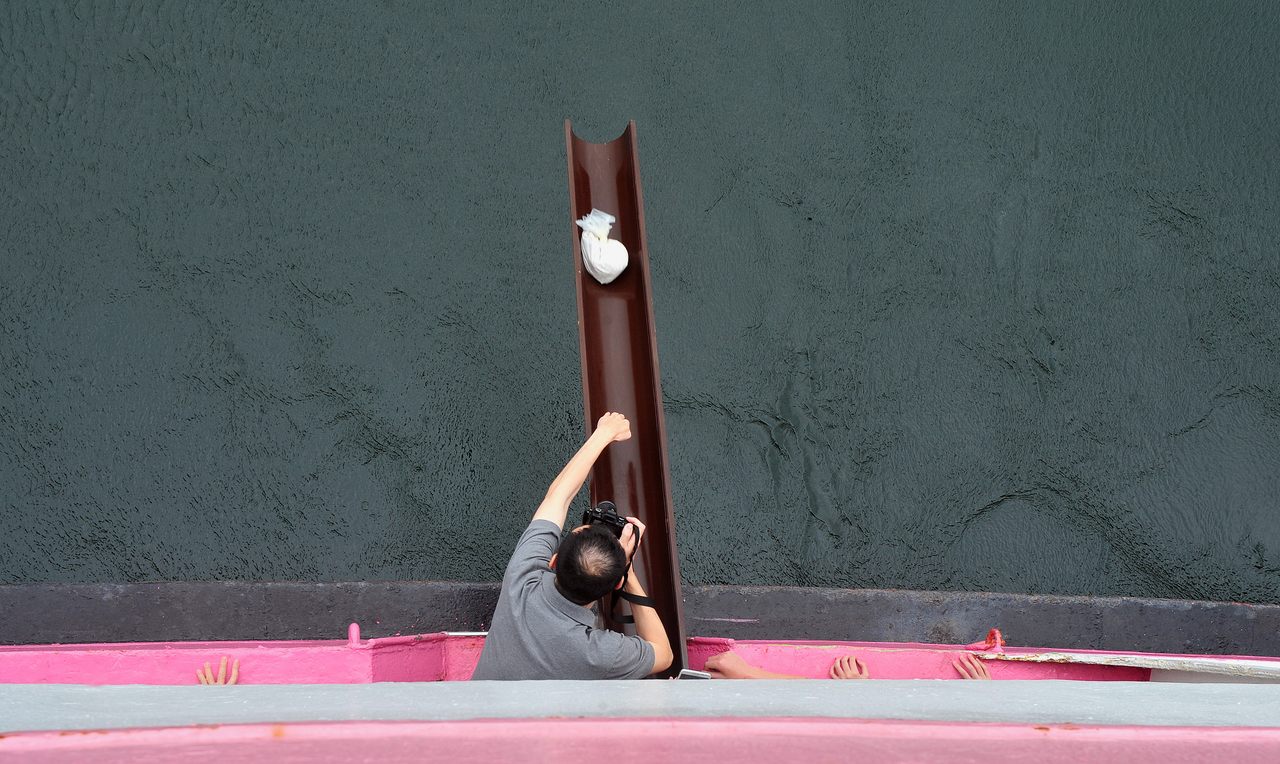 In April 2007, on a cloudy day punctuated by occasional showers, 70 passengers climbed into a boat off the shore of Hong Kong, holding their loved ones’ ashes. As they passed by the islands known as the “Brothers,” prayers were murmured, and 11 peoples’ cremated remains were cast into the waves.

When these remains, piled in biodegradable bags, slid down a chute and into the water, they became Hong Kong’s first government-sanctioned sea burials in decades, and a clean break with tradition.

Speaking to the South China Morning Post, family members described various reasons for choosing this type of send-off. For a 78-year-old woman from a fishing family in Tung Chung, it felt like a way of coming full circle—returning, one last time, to her roots. “She loved the sea very much,” her daughter, identified only as Ms. Kwok, explained. “She used to catch fish in this region a lot.” For the family of a single man who had prized independence, it symbolized something he had always strived for. “He loved freedom,” the man’s younger brother, a Mr. Yuen told the paper. “Scattering his ashes at sea can finally give him freedom.”

For the Hong Kong government, it was a relief. Dead bodies take up a lot of space, and the city has been running out of it.

Sea burials have long been practiced by navies, and private citizens in countries around the world scatter ashes into the water. But Hong Kong wants to see sea burial become one of its primary funeral practices. First, the government began promoting cremation in the 1960s, when the city’s cemeteries reached capacity. Instead of buying a cemetery plot, families could reserve niches in a columbarium—often a hillside city of the dead that looks something like a stadium, with tier after tier of niches large enough to hold two or four sets of ashes.

Now, more than 90 percent of Hong Kong’s dead are cremated, but the columbaria are nearly maxed out, too. A spot in a public columbarium costs HK$3,000 (US$382), with a four-year wait. A place in a private one runs roughly HK$1 million (US$127,500), and families may have to wait up to eight years. By many estimates, the city will need an additional 400,000 urn spaces by 2023, partly because residents tend to balk at the idea of new columbaria opening in their neighborhoods. To meet the demand, architects have gotten creative with proposals. One design firm imagines a skyscraper holding 15 stories of human remains. Another suggested a cruise ship that could store 48,000 urns offshore. Meanwhile, the city’s Food and Environmental Hygiene Department has spent the last decade trying to convince residents that the ocean can be a final resting place.

It hasn’t been easy. That first year, in 2007, few families seemed interested in burying their relatives at sea: The government received only 160 applications. (These are usually approved within a few days.) According to Hong Kong’s internal news service, sea burial increased fivefold between 2007 and 2015—but with more than 40,000 deaths in the city each year, the practice still represented less than 2 percent of funerals. Because so many residents are elderly, the city’s funerary infrastructure will soon be even more pinched. Annual deaths are projected to exceed 50,300 by the end of the decade.

On the occasion of that first sea burial, in 2007, Chan Fukchi, a spokesperson for the funeral company Hong Kong Warm Heart, suggested that people would come around to the idea over time. “Sea burial is an environmental and natural method,” Fukchi told the South China Morning Post. “I believe it will be popular in 30 years’ time, just like when cremation was first introduced 30 years ago.”

Other experts have been more skeptical. A decade after the government began promoting it in earnest, “I don’t think the sea burial is attractive to many people,” says Bobo Hi-Po Lau, a psychologist at Hong Kong Shue Yan University who specializes in end-of-life care. In the hierarchy of burial options, she says, sea burial is well below cremation niches or gardens of remembrance, where relatives scatter ashes among grasses and flowering shrubs.

People now joining the elderly population may be increasingly receptive to green burial options because of concerns about costs and the desire to be more environmentally friendly, Lau says. Even so, “a major issue about sea burial is that people feel that there is not a fixed place which they can visit the deceased,” she says. When ashes are scattered in a garden of remembrance, by contrast, the government inscribes a small plate with the deceased’s name. “It is a like a tiny niche, but with no urns behind it,” Lau says, but it provides a memorial site for families. Sea burials, on the other hand, can leave mourners unmoored, she adds. Meanwhile, some district councils have protested sea burials on the grounds that they make for an unsavory experience for swimmers, or could impact waterfront property values.

The pressures of urban land use are also running up against long-standing traditions and beliefs, explains Lily Kong, a social scientist and president of Singapore Management University, in an essay in the anthology Place/No-Place in Urban Asian Religiosity. It’s hard to square sea burials with the belief that “ashes of the deceased ancestors should not be mixed with those of others,” at the risk of “lost souls” or “misfortune for descendants,” Kong writes. “The traditional Chinese culture stipulates that a good death requires a fixed place for worship and the soul should be ‘housed’ in somewhere permanent,” Lau says. Dominic Lau Kit-yan, chairman of the Funeral Business Association, told the South China Morning Post in 2008 that many locals would prefer to wait for a funeral niche instead of dropping remains into the ocean—even if that meant years. Families sometimes keep cremated remains at home, or deposit them in niches in mainland China or the United States.

Still, the government is doubling down on its efforts to persuade people to consider the ocean as an option. Nearly every Saturday, the Food and Environmental Hygiene Department operates a free ferry route that shuttles mourners to designated burial areas. Cremated remains can enter the water at specific coordinates east of Tap Mun, east of Tung Lung Chau, and south of the West Lamma Channel. The ferry changes course in the presence of fishing vessels or a pod of the dusty-rose dolphins that are native to the area.

Sea burial is also getting an image makeover. In 2014, the department held a competition for secondary school students to design posters promoting green burial, and has since plastered subway stations with placards reading, in English and Chinese, “Scatter ashes at sea/Join the boundless and be free.”

The promise of freedom also underpins a recent promotional video produced by the department, starring television host and newspaper columnist Benny Li Shun-yan. In it, a seagull soars, white against a robin’s egg sky. The gray-blue sea reaches out toward infinity, and gentle waves lap, endlessly, on a rocky shore. Shun-yan gazes out over the water and describes scattering the ashes of his father in-law, who loved to travel. “When his ashes were drifting further away in the ocean, I felt like he had gone to another world, to continue traveling freely,” Shun-yan says in the spot.

The video is peppered with clues that the government is doing more to meet the conflicting demands of planning and tradition. A flurry of flower petals—yellow, pink, and white—drifts toward the water, reminding viewers that the government recently adjusted regulations to permit mourners to throw a handful of flowers into the water along with the ashes. (Other rituals that accompany many burial services on land, such as burning paper money or other offerings, are still prohibited at sea.) Starting in 2014, the ferry service also began offering return trips during the Qinming Festival, or the “grave-sweeping” holiday during which many families visit gravesites or columbaria to tidy up and leave offerings. The remains would be long-gone, of course, but the boat ride preserves some semblance of the ritual. There are also dozens of memorial websites where visitors can burn digital incense and candles, and leave virtual food and wine, though Lau isn’t convinced these are a satisfying proxy for the real thing, which also helps to strengthen familial bonds.

Shun-yan, in the video, skips stones into the water. There is no horizon in sight. One of the pink-and-white ferries slices across the frame, in front of a dense cluster of high-rise buildings. They’re as blue and silvery-gray as the sea itself—a reminder of the limited space on land and the vastness of the water. That’s where some people, at least, will spend eternity.

How Stephen Mallon captured this unusual voyage to the bottom of the ocean.
death

Bury Me in an Artificial Reef

One Florida-based company offers a second life at sea by adding cremains to something called a reef ball.
medical museums

The Abandoned Graveyards on a Thawing Arctic Island

Climate change is causing trouble on Herschel Island.
Want to see fewer ads? Become a Member.
From Around the Web
THE GASTRO OBSCURA BOOK
Taste the World!
An eye-opening journey through the history, culture, and places of the culinary world. Order Now